Accessibility links
Spinach Dinosaurs To Sugar Diamonds: 3-D Printers Hit The Kitchen : The Salt Pizza printed up for dinner? Or how about an edible photograph for your next birthday cake? The first restaurant-grade approved 3-D printer was unveiled last week, and the gadget can churn out candies in any shape imaginable. Other printers in the works make custom-shaped pastas and assemble ravioli and gnocchi. 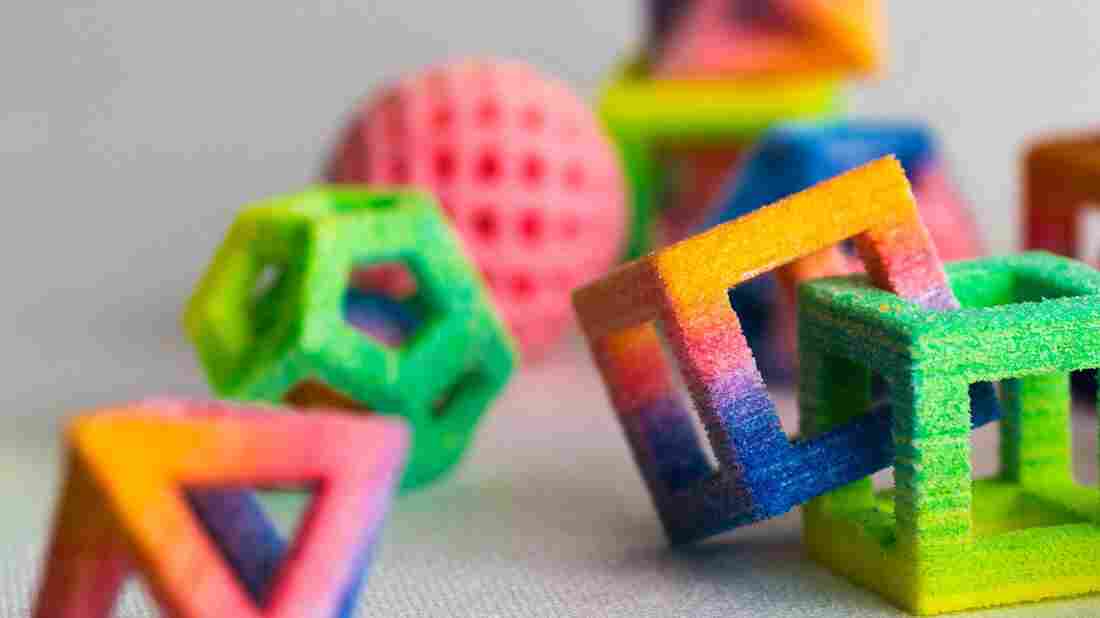 A mathematician's sweet dream: For about $10,000, you can print out rainbow sugar dodecahedrons and interlocking cubes. 3D Systems hide caption 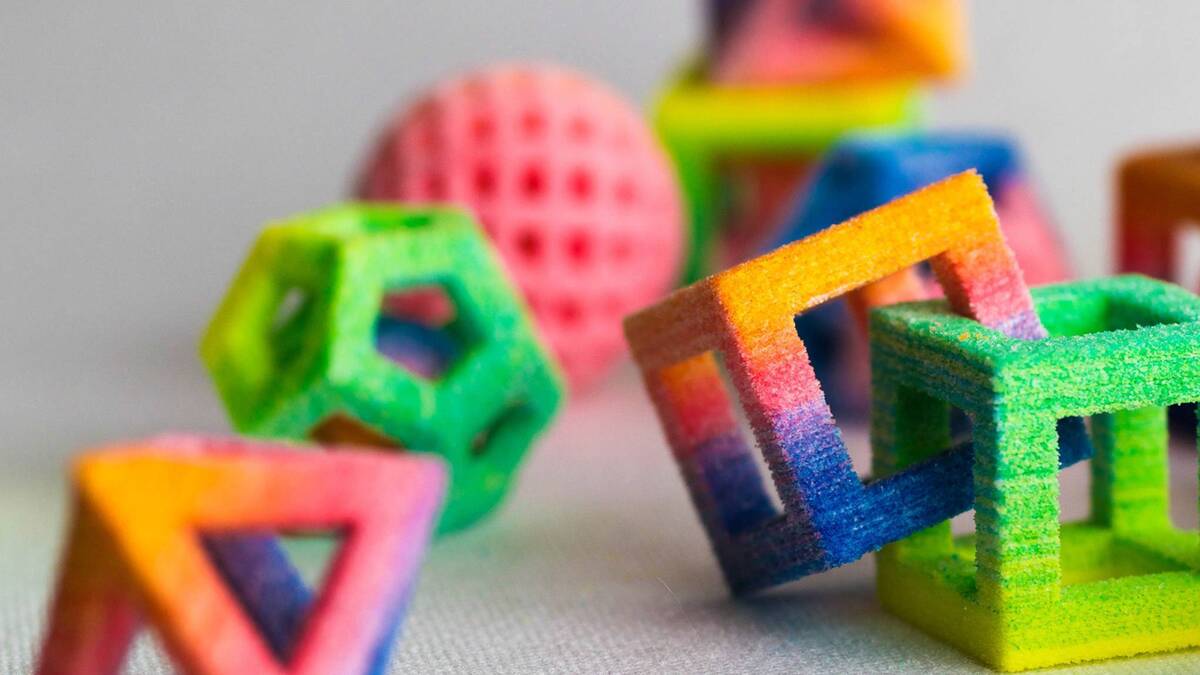 A mathematician's sweet dream: For about $10,000, you can print out rainbow sugar dodecahedrons and interlocking cubes. 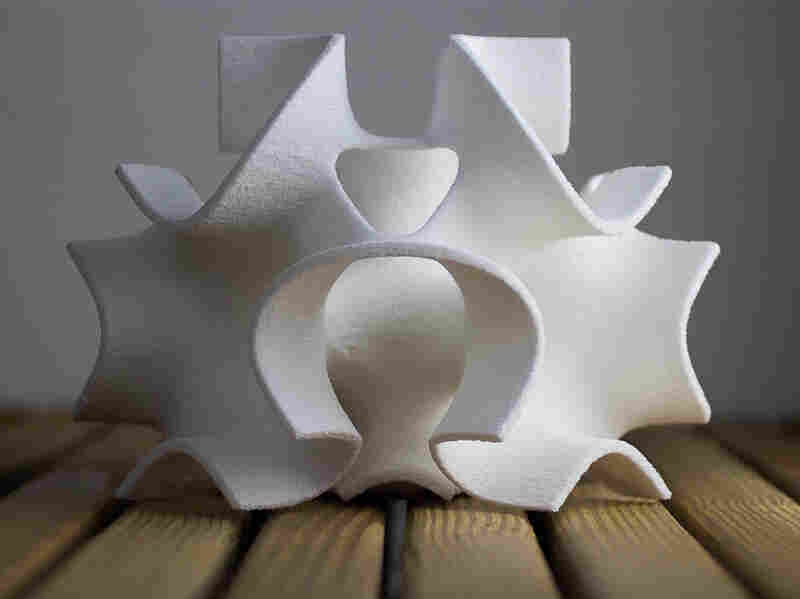 If you can design a shape on the computer, than you can print it with sugar or chocolate. The Sugar Lab hide caption 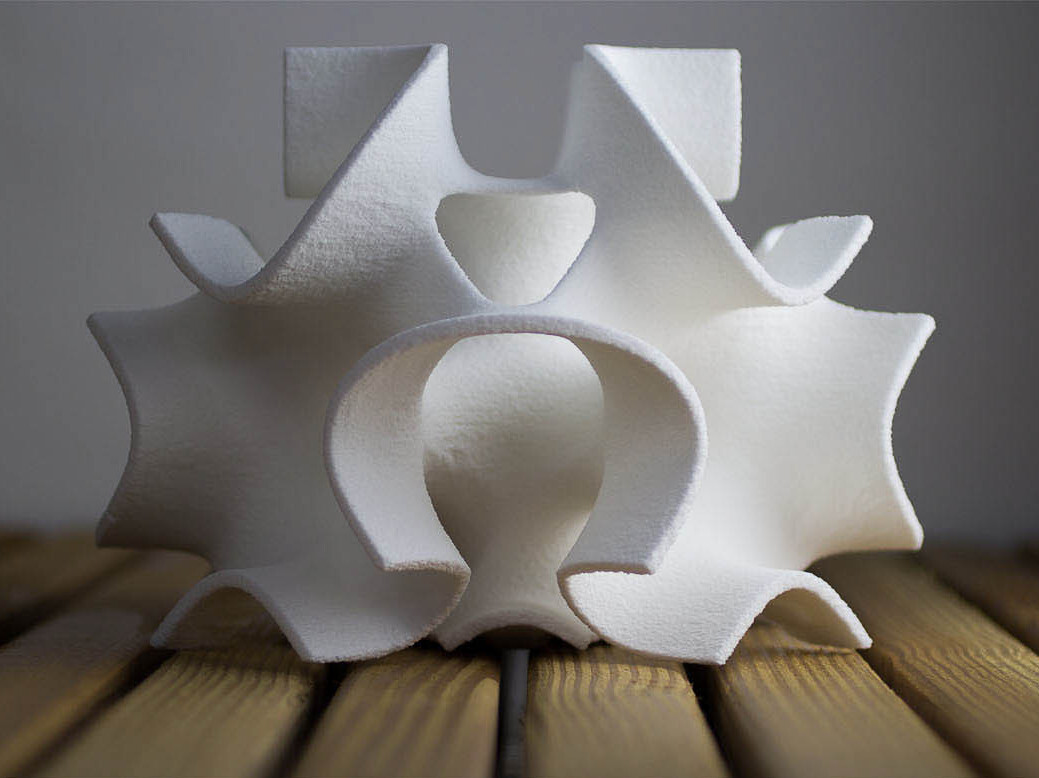 If you can design a shape on the computer, than you can print it with sugar or chocolate.

From cool casts for a broken arm to impressive replicas of Michelangelo's David, 3-D printing has come a long way in the past few years.

In fact, the technology is moving so fast that 3-D printers might be coming to your kitchen this year — or at least, to a bakery or bistro down the street.

The countertop device, called the ChefJet, is about the size of a microwave and can churn out chocolate and sugar candies in any geometric shape imaginable. Think hollow honeycombs, rainbow dodecahedrons, interlocking Buckyballs and stitched up globes — all made with sugar infused with mint, sour cherry or vanilla. 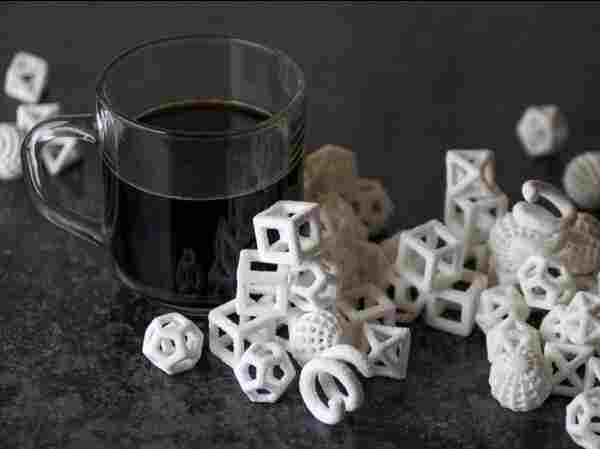 A mathematical twist on a cup of coffee: The ChefJet Pro 3-D printer spins sugar into intricate shapes to stir into your coffee or top your cupcakes. 3D Systems hide caption 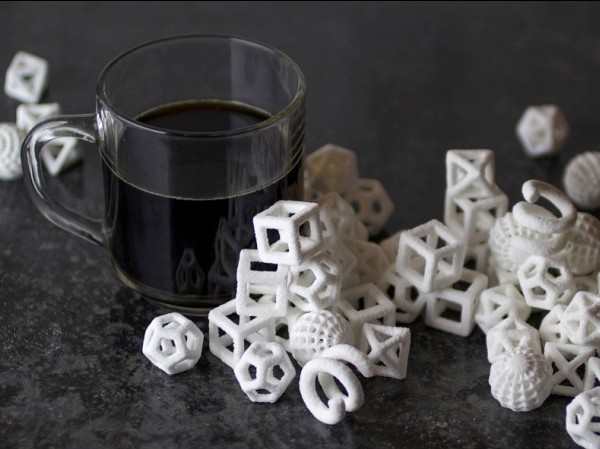 A mathematical twist on a cup of coffee: The ChefJet Pro 3-D printer spins sugar into intricate shapes to stir into your coffee or top your cupcakes.

Although the sugar cubes (can we call them that?) and chocolate sculptures look super cool, there are still some kinks to iron out before the 3-D printers replace pastry chefs and cake decorators.

For starters, "the samples the company handed out [at CES 2014] didn't taste very good," the AP wrote about the candies Monday. That could be problem.

And the ChefJet printer isn't cheap.

The company behind it, 3D Systems, is planning to start selling two models of the device later this year. The first one will cost about $5,000 and spins out candies in only one color. The top model, ChefJet Pro, will run you $10,000. But it will create not just multicolored candies but also photograph-quality pictures for wrapping around cakes. 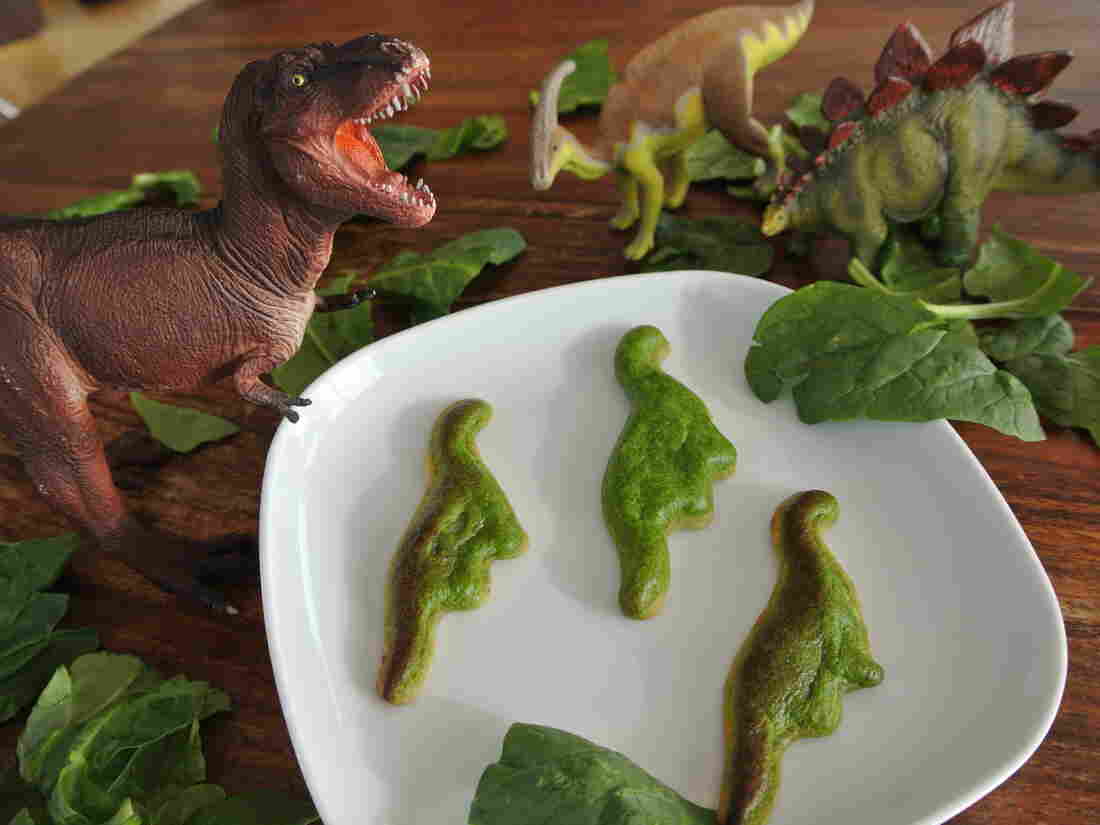 Dinosaur quiche, anyone? A traditional spinach quiche gets a technology makeover with the 3-D printer Foodini, which churns out foods in fun shapes, like dinosaurs and butterflies. Natural Machines hide caption 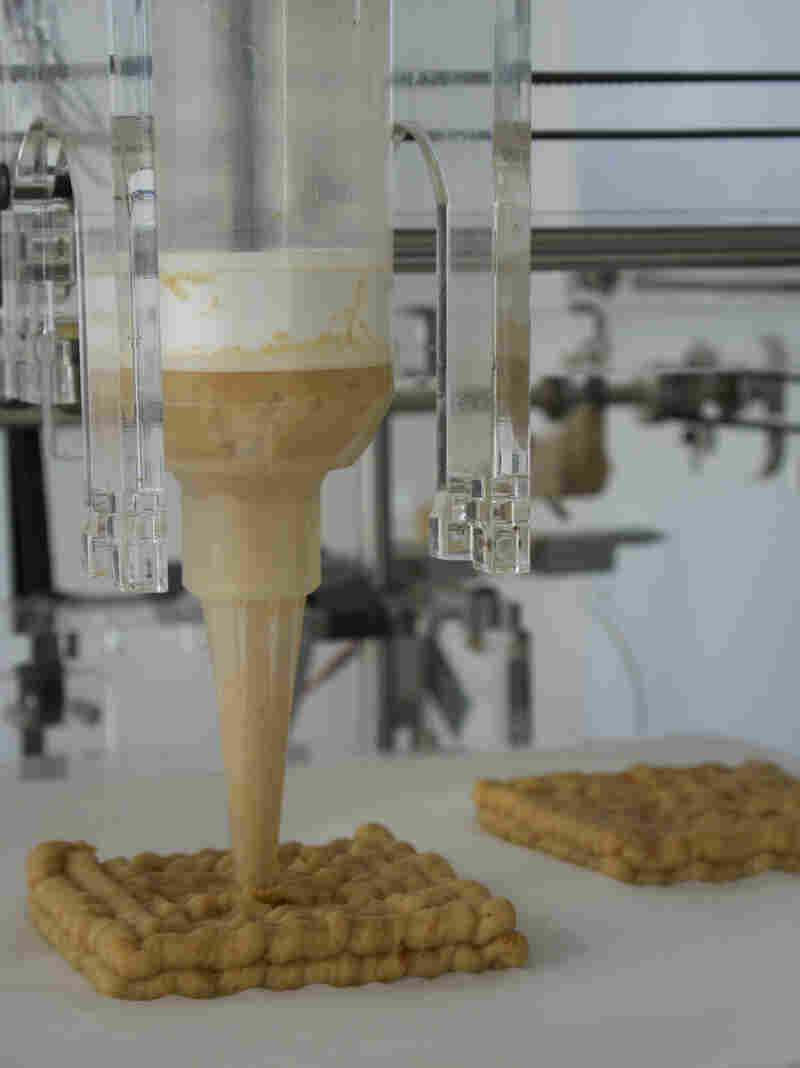 Here, the Foodini prints up the bread for a burger. The 3-D food printer will come with five ports to fill with homemade doughs, sauces or fillings. Natural Machines hide caption 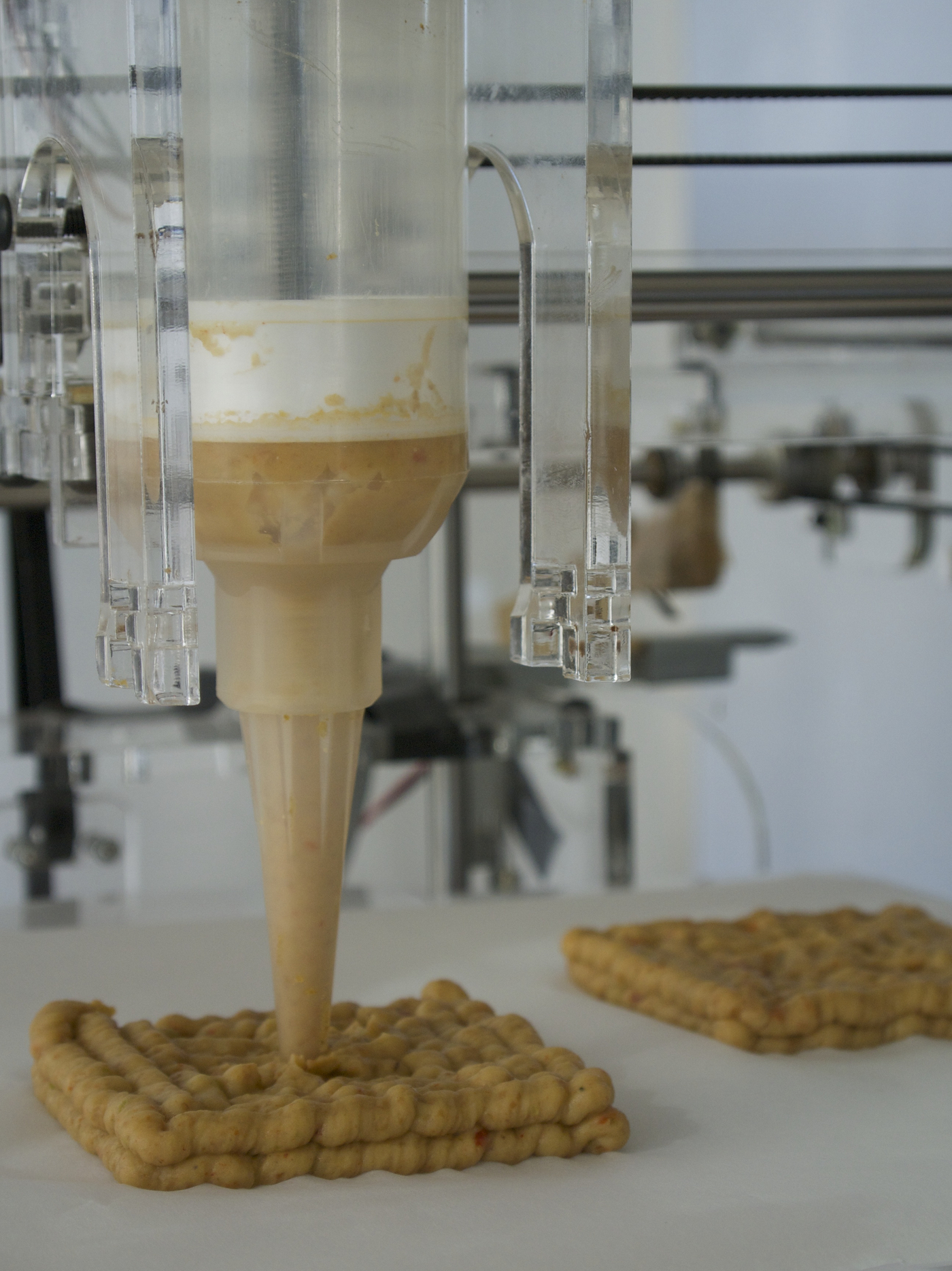 Here, the Foodini prints up the bread for a burger. The 3-D food printer will come with five ports to fill with homemade doughs, sauces or fillings.

To create the food printers, 3D Systems teamed up with engineers over at the The Sugar Lab in Los Angeles, which had already adapted a regular inkjet printer for the kitchen. The engineers had replaced the ink cartridges with ones that could hold water, sugar or chocolate.

"What's happening in this machine is that it's basically spreading out a fine layer of sugar," a spokeswoman for 3D System told the BBC Wednesday about the ChefJet. "And it's using an inkjet print head to paint on top of that sugar with water. And that allows the sugar to recrystallize and harden into a 3-D printed object."

Of course, the ChefJet isn't the only 3-D food printer in development.

The pasta giant Barilla is said to be working with a Dutch company to put a new twist on fusilli and rigatoni: "Barilla aims to offer customers cartridges of dough that they can insert into a 3-D printer to create their own pasta designs," The Guardian reported last week. "But the company declined to give further details, dismissing the claims as 'speculation.' "

Meanwhile, a team in Barcelona is probably the closest to getting printed pasta boiling on your stove.

They have developed an appliance, called The Foodini, that automatically prints items like ravioli, gnocchi, pizza and quiches on a baking pan. And then you pop them in the oven to cook.

"We recently made a 'designer fish and chips' with the Foodini," says Lynette Kucsma, the co-founder of Natural Machines, which makes the device. "We printed up mashed potatoes in the shape of a honeycomb and then filled each hole with fish or mashed peas."

The Foodini is still in the early stage of development. Kucsma and her team have a working prototype of it, but they won't start manufacturing it for another six months or so, she says.

In the end, Kucsma hopes the device will not only speed up home cooking but also get kids more interested in healthful foods.

"I have two young kids," she tells The Salt. "They are suspicious of anything green on the plate. They wouldn't touch a spinach quiche I made" — until she printed out the dish in the shape of a dinosaur and a butterfly.

"They actually ate every single one of the dinosaur quiches," Kucsma says. "I couldn't believe it. It was the exact same recipe. It was just making it fun for kids so they'd try new foods."

Still, at about $1,300 for each Foodini, that's a pretty pricey bite of spinach. 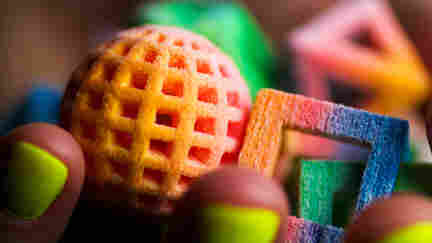 We may not be able to 3-D print an apple pie or Peking duck yet. But you can now make these rainbow sugar spheres and cubes with a $10,000 ChefJet Pro 3-D food printer. 3D Systems hide caption