Accessibility links
Borscht Make Your Heart Beet? They're Serving 70,000 Gallons In Sochi : The Salt Organizers of the Winter Games are preparing to serve up quite a bit of the hearty, deep-red Russian soup. Which is kind of ironic, says Russian food writer Anya von Bremzen, since borscht carries with it complicated political implications. And not all borschts are created equal, she warns. 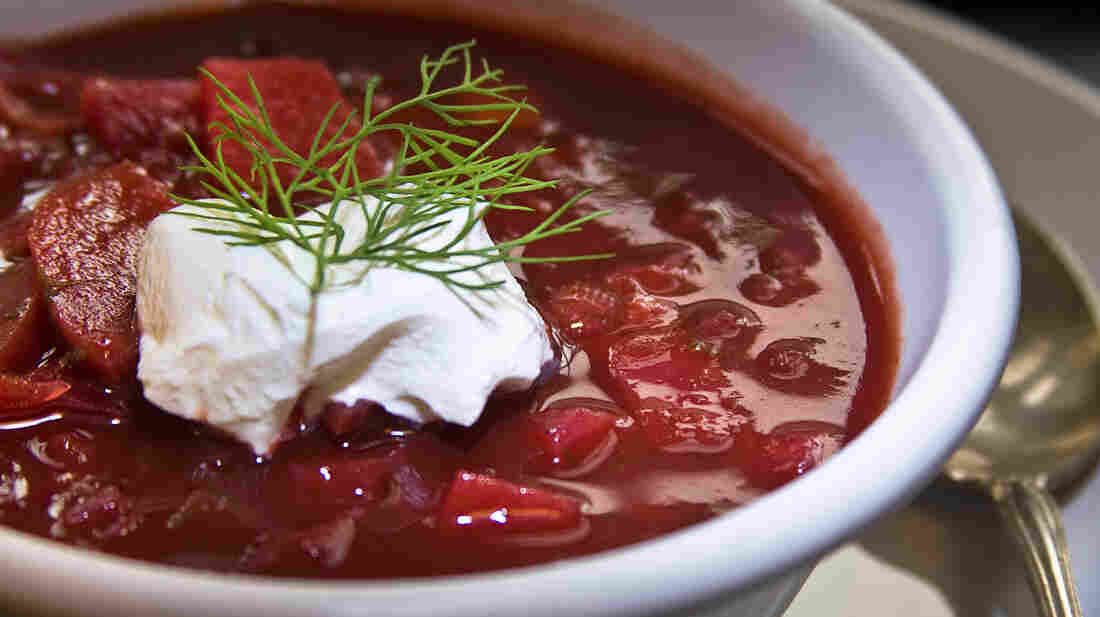 There are dozens of varieties of borscht — but at its most basic, it's a beet soup with potatoes, tomatoes and often beef or pork. Flickr/Liz West hide caption 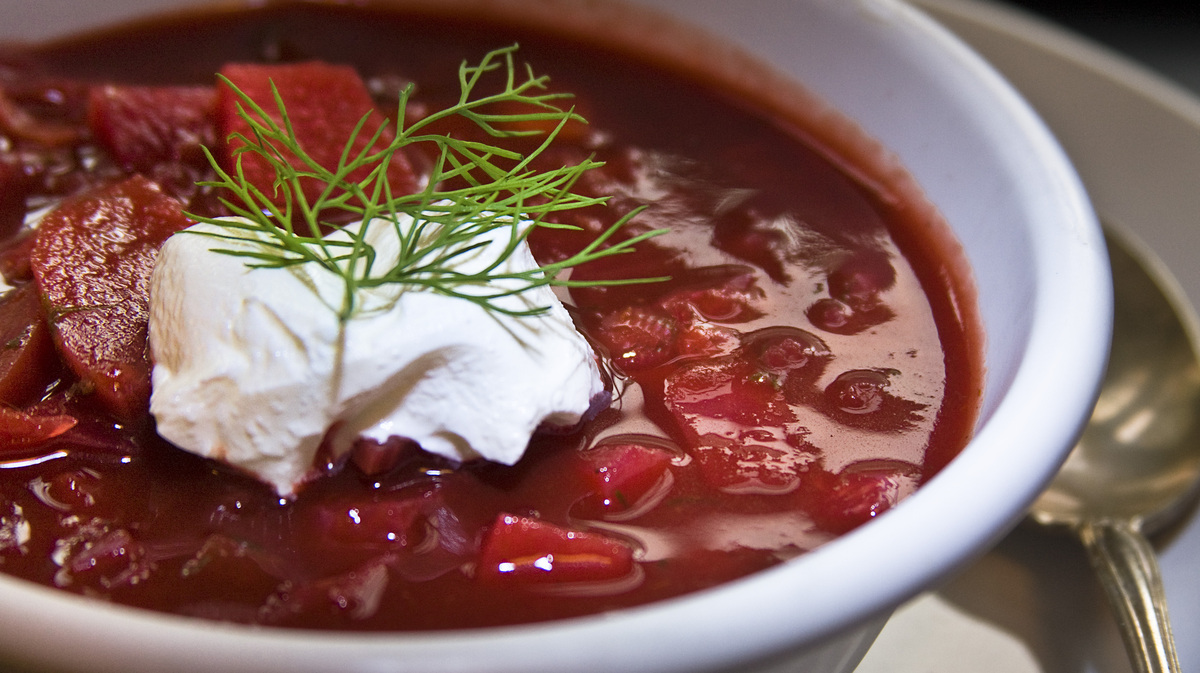 There are dozens of varieties of borscht — but at its most basic, it's a beet soup with potatoes, tomatoes and often beef or pork.

Russia's Soviet days are well behind it, but if you're headed to Sochi for the Winter Olympics, your dining options will still run deep red — as in borscht.

Organizers in Sochi expect to serve 70,000 gallons of this Russian staple — a hearty soup whose color comes from beets — to spectators. Borscht has graced both the high table of the Kremlin and the lowly tables of peasants across the former Soviet Union.

But not all borscht is created equal, says Anya von Bremzen, who considers herself something of an expert in cooking up a pot. She's the author of Mastering the Art of Soviet Cooking: A Memoir of Food and Longing. She tells All Things Considered host Melissa Block that defining borscht is complicated.

For one thing, it can be served warm or cold, spelled "borscht" or "borshch." But at its most basic, it's made with beets, potatoes, tomatoes and often beef or pork.

The politics of borscht are also complex. The soup is the national dish of Ukraine — which adds some culinary geopolitical irony to the Sochi Olympics, Bremzen says.

"[At] the Russian Olympic Games, which are the pet project of Vladimir Putin, they're serving all these gallons and gallons of borscht," she says. "Whereas in the Ukraine ... as part of an anti-Moscow, anti-Putin protest, they were also serving borscht, affirming that it's Ukraine's national dish."

Growing up in the Soviet Union, Bremzen sampled many borscht varieties, which she says ranged from "vile" to delicious.

"It's such a symbolic dish that it has all these conflicting memories and associations, like everything we had in the Soviet Union," she says.

Many Americans might recognize a Jewish version of borscht that is cold and sweet. But Bremzen says a Ukrainian will insist that borscht include pork and have a dollop of sour cream on top.

"Pork and sour cream — it's as anti-Jewish as you can get," she says. "But both versions are correct."

She says the institutional borschts served in Soviet Union-era schools and prisons were flavorless and greasy. But she describes her mother's recipe — a frugal vegetarian version made with a can of tomato paste and a "forlorn" beet — as homey. Her father also prepared an "extravagant" borscht (that recipe is below).

"My father is a very meticulous cook. He actually made it by juicing the beets and carrots, and it was loaded with meat. And he added beans in the western Ukrainian manner. He got the recipe from a Ukrainian neighbor we had in the communal kitchen [back in the Soviet days], where 18 families shared one kitchen," she says.

Foodies who are Sochi-bound for the games, which begin Feb. 7, should look for a borscht that has a slightly sweet and sour aroma with earthy vegetable smells, Bremzen advises. Even so, she warns, finding a great bowl might prove quite the challenge, she says.

"How can you make a great borscht for that many people?" she muses. "I'm just wondering.

"It might be that institutional kind," she warns. "But maybe with a shot of vodka, [it's] not so bad."

2 pounds beef chuck, shin or brisket in one piece, trimmed of excess fat

1 16-ounce can diced tomatoes, with about half of their liquid

One 16-ounce can kidney beans, drained and rinsed

2 tablespoons sugar, or more to taste

Combine beef and water in a large stockpot and bring to a boil over high heat. Skim and reduce heat to low. Add the whole onions and carrots and the bay leaf and season with salt and pepper to taste. Simmer partially covered until the meat is tender, about 1 1/2 hours. Strain the stock, removing the meat. You should have 11 to 12 cups of stock. Cut the beef into 1 1/2-inch chunks and reserve.

While the stock cooks, preheat the oven to 400 F. Wrap the beets separately in aluminum foil and bake until the tip of a small knife slides in easily, about 45 minutes. Unwrap the beets, plunge them into a bowl of cold water, then slip off the skins. Grate the beets on a four-sided box grater or shred in a food processor. Set aside. Strain the mushroom soaking liquid and save for another use. Chop the mushrooms.

In a large, heavy soup pot, cook the bacon over medium-low heat until crispy. Remove with a slotted spoon and reserve. To the bacon drippings, add the chopped onion, mushrooms, diced carrot and green pepper, and cook until softened, about 7 minutes, adding a little butter if the pot looks dry. Add the remaining butter and cabbage, and cook, stirring, for another 5 minutes. Add the paprika and stir for a few seconds. Add the stock, potatoes, tomatoes, apple and the reserved beef, and bring to a gentle boil. Skim off any froth, season with salt to taste, cover, and simmer over low heat until potatoes are almost tender, about 15 minutes. Stir in half of the reserved beets and the beans, and add a little water if the soup looks too thick. Continue cooking over medium-low heat until all the vegetables are soft and the flavors have melded, about 25 minutes more. (The borshch can be prepared a day ahead up to this point. Reheat it slowly, thinning it out with a little water if it thickens too much on standing.)

Before serving, use a mortar and pestle and pound the garlic and parsley with 1 teaspoon of ground black pepper to a coarse paste. Add to the simmering soup along with the reserved bacon, the remaining beets, vinegar and sugar. Adjust the seasoning and simmer for another 5 minutes. Let the borshch stand for 10 minutes. To serve, ladle the soup into serving bowls, add a small dollop of sour cream to each portion, and sprinkle with dill and scallions. Invite the guests to mix the sour cream well into their soup.