Accessibility links
Coffee Myth-Busting: Cup Of Joe May Help Hydration And Memory : The Salt A new study adds to the evidence that among everyday coffee drinkers, the old wives' tale that coffee will lead to dehydration is really just that: a tale. Another study found that caffeine may help to consolidate memories in the short term, but may not help retrieve old memories. 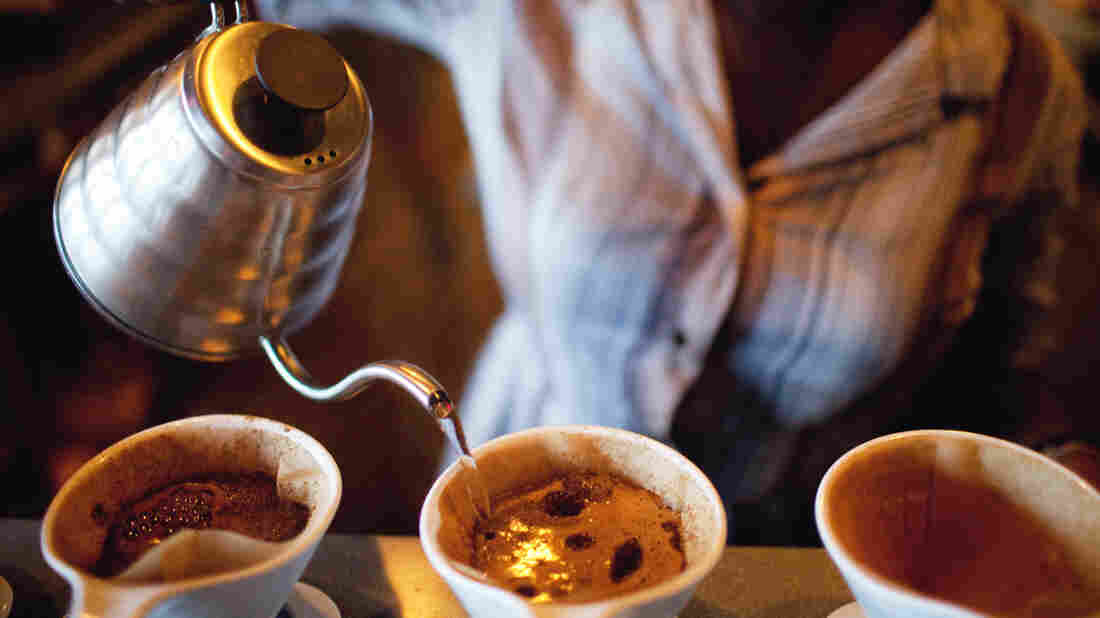 Despite caffeine's many benefits, there's a belief out there that a daily coffee habit can cause dehydration.

So is it true? Not according to the findings of a new study.

Researchers at the University of Birmingham in the U.K. studied the fluid levels of 50 men who had a habit of consuming about three to six cups of coffee each day.

With this kind of moderate coffee consumption, the authors conclude that "coffee ... provides similar hydrating qualities to water."

To compare the hydrating effects of coffee directly with water, each participant completed two phases of the study. In one phase, they drank coffee as their main source of hydration. In the other phase, the participants went off coffee and drank equal amounts of water.

"Caffeine really had absolutely no influence on hydration status," concludes Douglas Casa of the University of Connecticut, a researcher we asked to review the paper. In other words, the coffee didn't prompt the body to pee (or flush out) more fluid.

"It's well understood that if you drink coffee habitually you can develop a tolerance to the potential diuretic effects of coffee," says study author Sophie Killer, a doctoral researcher at Birmingham.

Prior research has already chipped away at the dehydrating myth. For instance, one study found that caffeine didn't hinder hydration among athletes who consumed caffeinated beverages to rehydrate throughout practices in the heat.

This new study adds to the evidence, that among everyday coffee drinkers — say, those of us who routinely sip a cup of Joe or two at the office — the old wives' tale that coffee will lead to dehydration is really just that: a tale.

But it would be an overreach to interpret these findings as coffee is the same as water when it comes to overall health. Too much coffee can lead to jitters. And most experts agree that water or sports drinks are best for rehydrating after fluids have been depleted.

Bottom line: A daily coffee habit won't lead to dehydration. But it's best to limit caffeine to moderate levels to steer clear of jitters and interruptions to sleep.

And, oh, I should mention another new study that links caffeine to enhanced memory.

The research, published in Nature Neuroscience, evaluated the effects of placebo tablets compared with 200 milligrams of caffeine tablets (about as much caffeine as a large cup of coffee) on the memories of participants who were shown a series of images.

One day after the initial viewing of the images, the participants who had been given the caffeine tablets were more likely to distinguish between the images they had already viewed and new, similar images that had been added to the mix.

"We've always known that caffeine has cognitive enhancing effects, but its particular effects on strengthening memories and making them resistant to forgetting has never been examined in detail in humans," wrote Michael Yassa of Johns Hopkins University in a release about the study.

"We report for the first time a specific effect of caffeine on reducing forgetting over 24 hours," wrote Yassa.

There are certainly a lot of questions yet to be answered. For instance, caffeine may help to consolidate memories in the short term. But is it useful in helping us retrieve memories? This study suggests not.

As we've reported, caffeine-containing nectar has been shown to improve the memories of honeybees, so stay tuned — there may be more buzz about the effects of caffeine on memory in research still to come.