Accessibility links
Good News: Americans Are Eating 78 Fewer Calories Every Day : The Salt Americans' eating habits are changing — and so are our attitudes about food, a new USDA report finds. We're dining out less, eating at home more, cutting back on the saturated fat and consuming more fiber. 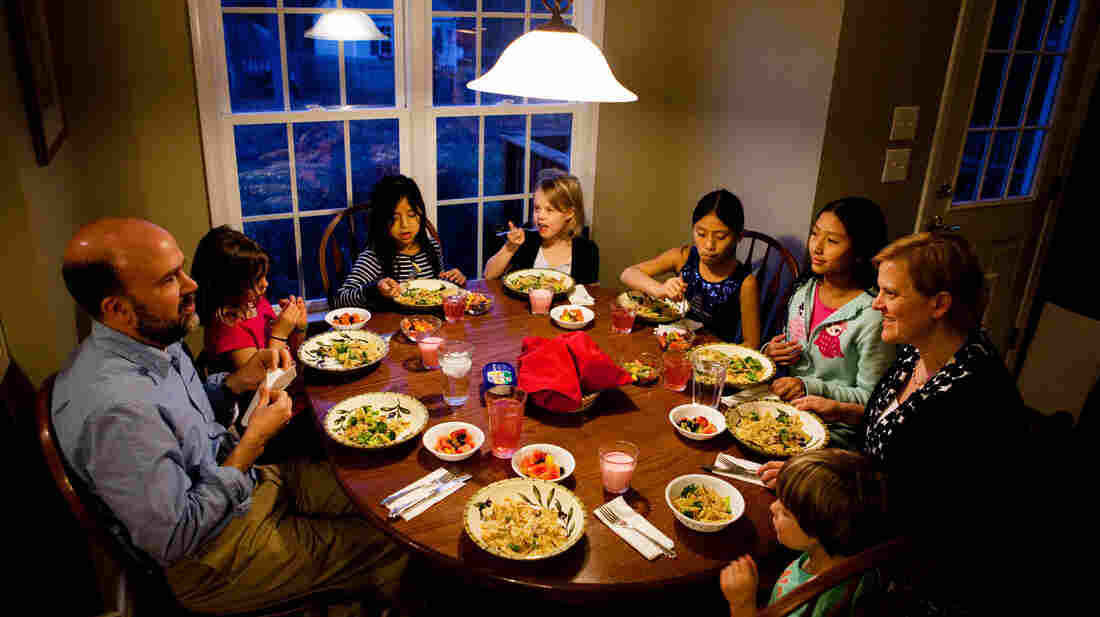 Americans are dining out less and eating at home more, new government research shows. This may mean more family dinners, like this one at the Brown-Spencer home in Mechanicsville, Va. Maggie Starbard/NPR hide caption 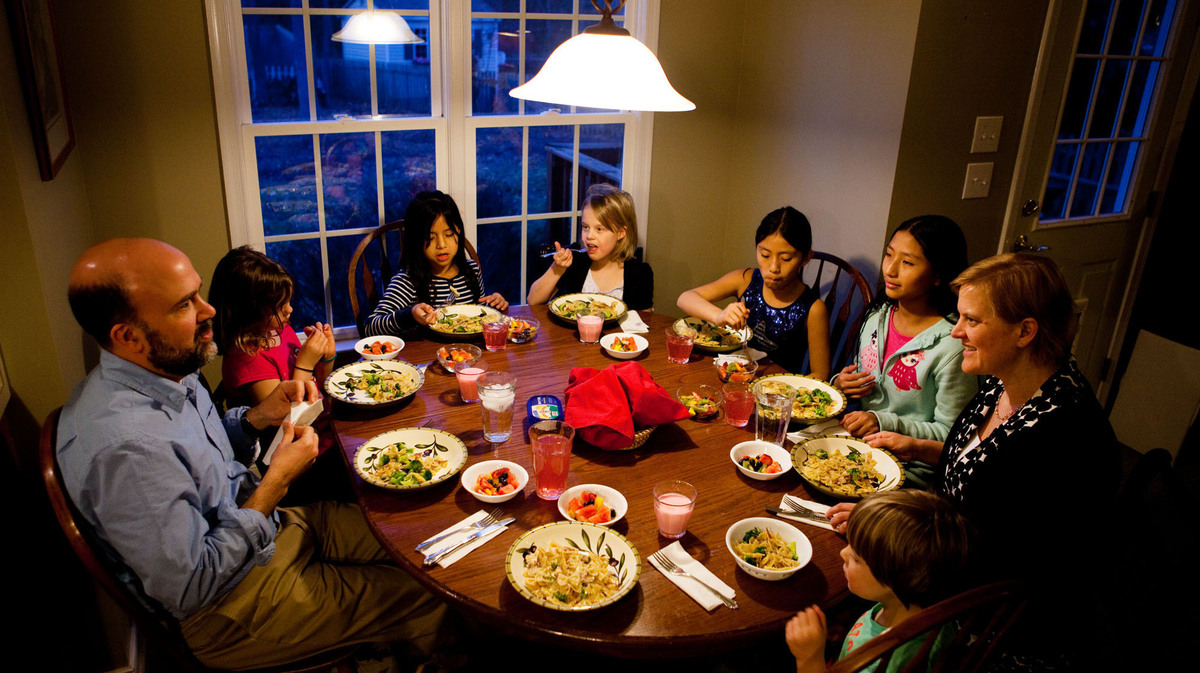 Americans are dining out less and eating at home more, new government research shows. This may mean more family dinners, like this one at the Brown-Spencer home in Mechanicsville, Va.

The U.S. Department of Agriculture has crunched some numbers, and its conclusion is that Americans are munching less. And on more healthful stuff.

On average, working-age adults were eating about 78 fewer calories per day in 2010, compared with five years earlier, according to a report released Thursday.

So what are we eating less of? Saturated fat. Researchers documented a 6 percent decline in calories from saturated fat between 2005 and 2010.

And fiber consumption is up. Fiber from foods fruits, vegetables and whole grains was up by 8 percent compared with 2005.

"We have made significant progress, but our work is not done," Agriculture Secretary Tom Vilsack wrote in a release about the report.

The new report is based on data from the National Health and Nutrition Examination Survey, which collects details on eating habits and other health-related information from a nationally representative sample of about 10,000 people in the U.S.

Where In The World Is The Best Place For Healthy Eating?

Americans cut back significantly (12.9 percent) on the amount of money they were spending on food at restaurants and fast-food joints. On average, Americans were eating three fewer meals out during that time.

Researchers conclude that 20 percent of the improvements in the quality of diet are explained by this drop in eating out.

And with people eating at home more, they tended to eat more frequent family meals, which tend to be more healthful and lower in calories.

What's more, people's attitudes and attention to food also seem to be changing. The report finds that more than 50 percent of older adults reported using the Nutrition Facts Panel when making food choices.

Also, whether it's shows like The Biggest Loser, the makeover of school food, or work-based wellness programs nudging us to exercise more and eat less, more Americans seem to be getting the message.

So, cutting 78 calories may seem trivial. But experts say, if the trend holds, it's more significant than you might realize.

As I've reported, eating 100 fewer calories a day can result in weight loss of almost 10 pounds over the course of a year.

Two caveats: Metabolisms vary from person to person, so this is a rough estimate. And as we've previously reported, there's growing evidence that not all calories are created equal, and when you eat those calories could also make a difference. Still, this simple calculation is a reminder that incremental changes can help chip away at the obesity epidemic.

And as we reported this past summer, top leaders at the Centers for Disease Control and Prevention say we may have started to turn the tide. For the first time, obesity among young children is on the decline in 19 states and U.S. territories.

Of course, as we reported yesterday, in terms of making healthful food affordable and accessible, the U.S. still has plenty of room for improvement.