Accessibility links
Can Mom's Pregnancy Diet Rewire Baby's Brain For Obesity? : The Salt Expectant moms are eating for two, but that isn't a license to indulge. A solid body of research suggests that what happens in utero can set the stage for obesity. And a new study in mice suggests one way that poor maternal diet might play a role: by rewiring a part of the brain that regulates appetite. 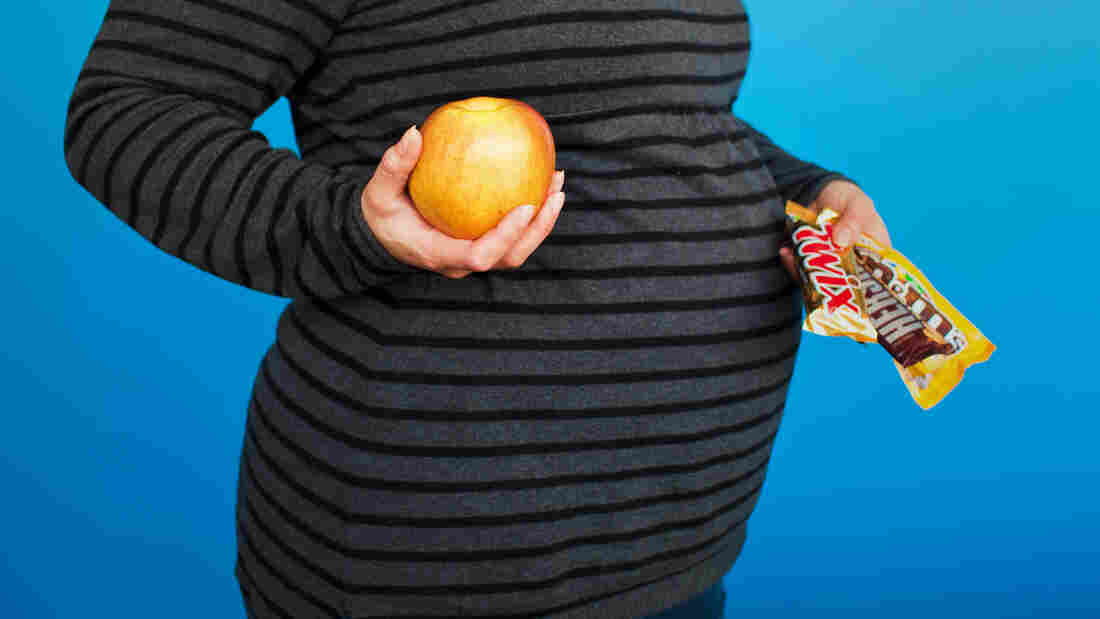 Choose wisely: What Mom eats during pregnancy can set the stage for obesity in her baby. Meg Vogel/NPR hide caption 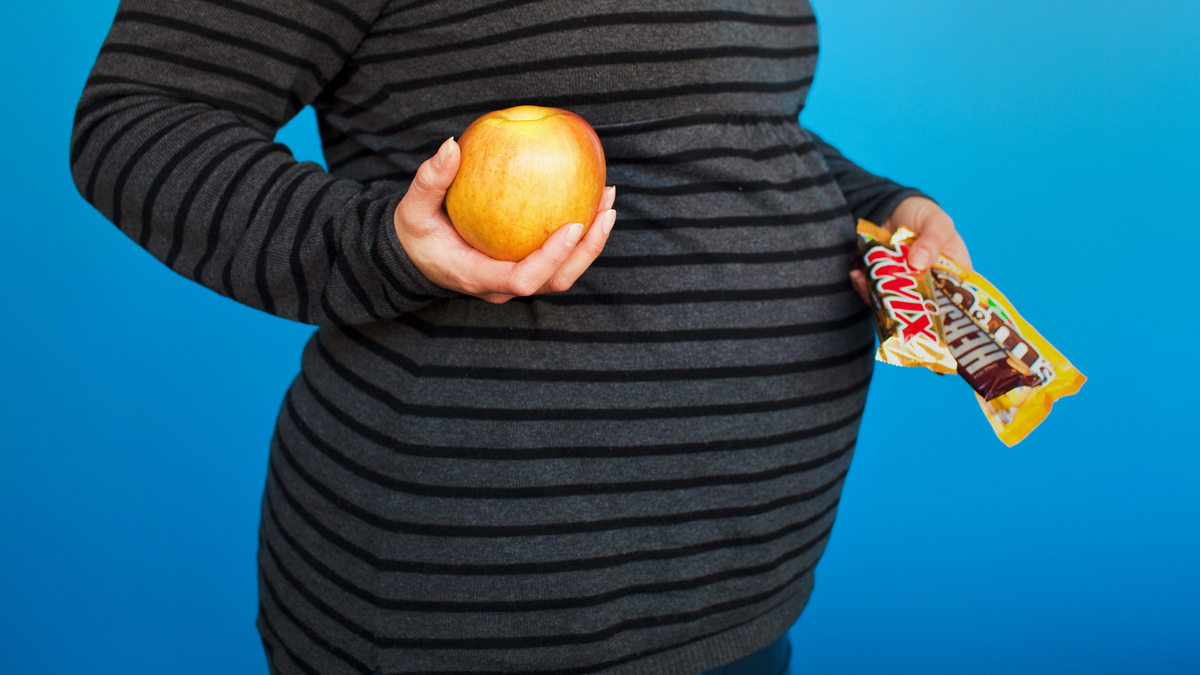 Choose wisely: What Mom eats during pregnancy can set the stage for obesity in her baby.

Moms-to-be are often reminded that they're eating for two. It's tempting to take this as an excuse to go for that extra scoop of the ice cream. (Believe me, I've been there.)

But a solid body of research suggests that expectant mothers should be walking away with the opposite message: Pregnancy should be a time to double-down on healthful eating if you want to avoid setting up your unborn child for a lifetime of wrestling with obesity.

Now, research published this week offers tantalizing clues from mice of one way that a poor maternal diet may be laying the groundwork for obesity: by rewiring a part of the brain that's critical to regulating appetite. And these changes appear to happen in the third trimester of pregnancy, suggest the findings, which appear in the journal Cell.

First, it's crucial to stress that we're talking about mouse moms here, not human ones. Researchers at the Yale School of Medicine and the Max Planck Institute for Neurological Research in Germany used them to find out how maternal diet influenced brain development in offspring.

So they played around with feeding mouse mothers a high-fat diet before and during pregnancy and lactation. Pups born to obese mothers "had different metabolic profiles than those of pups from mothers who were on a normal diet," explains study co-author Tamas Horvath, a professor of neurobiology and obstetrics at Yale.

Specifically, he says, the pups whose mothers ate a high-fat diet while they were in utero had impaired connections in brain neurons that regulate glucose and help control when they're hungry and full and how fat gets broken down.

That wasn't entirely unexpected, since plenty of studies in animals and humans have established that obese mothers beget obese children.

What really surprised the researchers, says Horvath, is that these neural changes also showed up in the offspring of mice who weren't obese but were fed the high-fat diet only during lactation. This period of brain development in mice corresponds to the third trimester of pregnancy in humans.

This suggests that even normal-weight moms-to-be need to watch their diet if they want to avoid setting the stage for obesity in their kids, he says. But it also suggests that researchers should look more closely at late pregnancy as a period when it might not be too late to intervene in a mom's diet to help break the cycle of obesity.

"This study is another important piece to the puzzle that early-life influences can have long-lasting consequences to the offspring," says Dr. David Ludwig, a Harvard researcher who studies obesity in children.

He warns, though, that we should be careful in how far we extrapolate the findings to humans. After all, he notes, "humans and rodents diverged in evolution 60 million years ago."

For one thing, Ludwig says, a high-fat diet for rodents isn't the same as one for humans, so we can't apply the findings directly to human moms. But that said, the general principle that nutrition in the womb and during early life is key to long-term health risks like obesity still applies, says Ludwig, who directs the New Balance Foundation Obesity Prevention Center at Boston Children's Hospital. It's not simply genetics or home environment that explains a family's tendency toward obesity, he says.

Last October, Ludwig and his colleagues published a study of more than 40,000 mothers and their more than 90,000 children. To factor out the role of genes and environment, the researchers looked only at siblings, comparing how much weight a mother gained in different pregnancies and how that related to her children's weight years later. Maternal weight gain, he notes, is a good proxy for the quality of diet during pregnancy.

They found that kids born to moms who put on too much weight — which they defined as 40 pounds or more — during pregnancy had an increased risk of becoming obese even more than 10 years down the road.

The takeaway message for expectant mothers, he says, is that, regardless of your genes, what you eat during those 40 weeks of pregnancy really does matter:

"Genes, at this point, are not modifiable, whereas diet and pregnancy weight gain are."