Accessibility links
Why Letting Kids Serve Themselves May Be Worth The Mess : The Salt Research shows that when kids are allowed to serve themselves, they're less likely to overeat. They also tend to be more open to trying different kinds of foods.

Why Letting Kids Serve Themselves May Be Worth The Mess

Why Letting Kids Serve Themselves May Be Worth The Mess 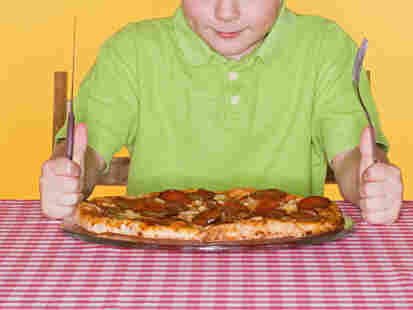 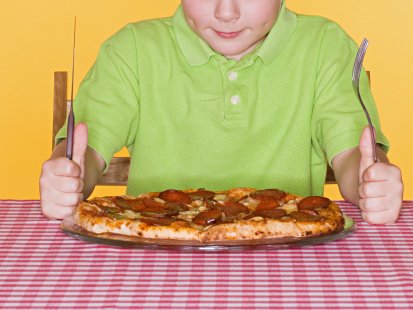 Adults tend to overestimate how much small children can eat, a child development researcher says.

When it comes to feeding little kids, adults know best. But some nutritionists now argue that children could also benefit from a bit of autonomy at mealtimes.

The U.S. Department of Agriculture recommends that parents let kids as young as 2 years old serve themselves at home. And in 2011, the Academy of Nutrition and Dietetics advised that child care providers should serve meals "family-style" — present kids with a few different dishes and allow them to take what they want.

Why? Because there's now research showing that when kids are allowed to serve themselves, they're less likely to overeat. They also tend to be more open to trying different kinds of foods.

Despite this guidance, the majority of parents and most child care centers still make up plates for kids, according to Brent McBride, who directs the Child Development Laboratory at the University of Illinois.

That means they may be missing an opportunity to help kids form good eating habits in the pre-school and kindergarten years, McBride tells The Salt.

"If you serve pre-plated meals to children, the adults are deciding how much to eat," McBride says. And adults tend to overestimate how much small children can eat.

A recent study by McBride and his colleagues found that most independent and government-supported child care centers didn't serve meals family-style more than half of the time. The exception was centers in the U.S. Department of Health and Human Services' Head Start program. They were much better about allowing children to serve themselves — because the program requires teachers to follow the Academy of Nutrition and Dietetics guidelines.

But McBride says that a lot of child care providers feel that serving food family-style just isn't practical. It takes more time, requires a lot more clean-up and often results in some amount of food waste.

Still, many teachers do manage to make it work, McBride says.

"Often adults don't trust children can do it," says Laurel Branen, a dietician and a professor emeritus of food and nutrition at the University of Idaho. "But they just need practice."

At child care centers, Branen tells The Salt, teachers can always supervise to make sure the kids aren't licking the spoons or making a huge mess.

Allowing kids to serve themselves isn't the same as giving them free rein over their diets, Branan says. "[Adults] need to explain what a serving is," she says. "It means 'Take a spoonful and you can always have more.' "

The strategy gets more complicated with kids who don't have access to regular meals at home. These kids may not know when they can expect their next meal so they tend to binge whenever food is available, Branen says. And while these are the kids most at risk of childhood obesity, meals at child care centers are also critical in preventing hunger, she says.

Of course, relinquishing control over serving size isn't easy for adults. "I know this is really, really challenging for parents because you also want to make sure [kids] are eating a balanced diet," says Barbara Fiese, a professor of human development at the University of Illinois.

Initially, it can be hard to watch your child pass on the broccoli time after time, Fiese tells The Salt. But parents should take heart: Kids have to be exposed to new foods 12 to 15 times before they learn to accept them.

Family-style meals are good for kids' development in other ways, Fiese says. When kids handle serving spoons and ladles, they're practicing their motor skills and coordination. And the conversations that occur between the kids and adults during leisurely family-style meals have major social and emotional benefits.

The days of loading up kids' plates and then rewarding them for making it to the "clean plate club," Fiese says, are long gone. That's, at least, as far as these scientists are concerned.