Accessibility links
Making Moonshine At Home Is On The Rise. But It's Still Illegal : The Salt Let's be clear: Making spirits at home with plans to drink it remains against federal law, folks. Even so, more and more people appear to be taking up home distilling as a hobby. For some, it's the first step toward a professional, legit operation.

Making Moonshine At Home Is On The Rise. But It's Still Illegal

Making Moonshine At Home Is On The Rise. But It's Still Illegal 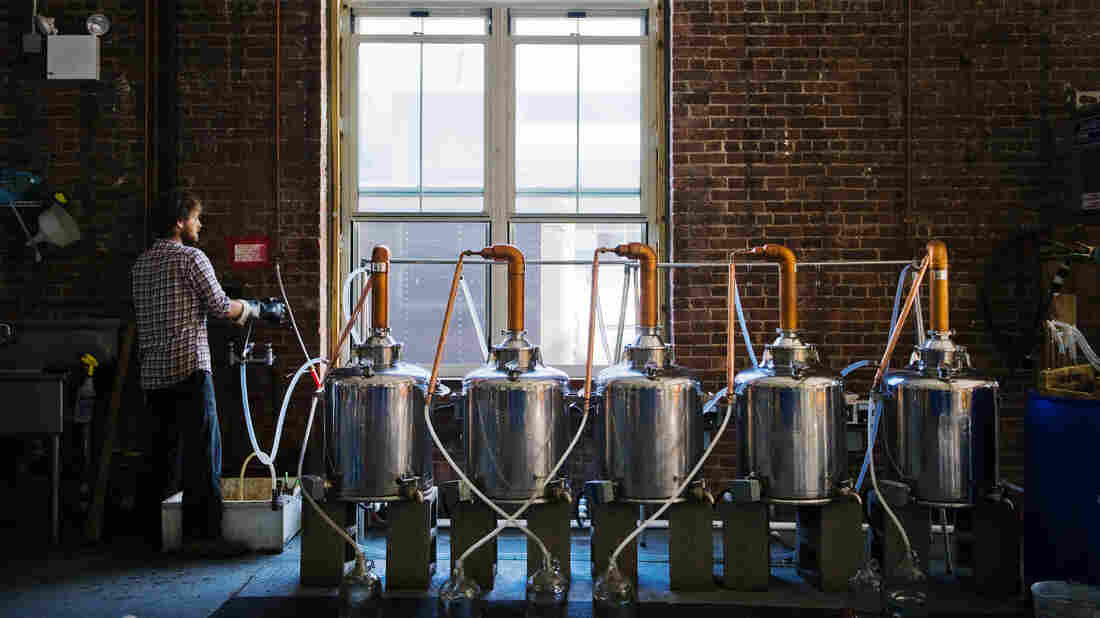 A worker at New York's Kings County Distillery, which opened in 2010. Before going legit with the operation, co-founder Colin Spoelman (not pictured) learned to make moonshine in his Brooklyn apartment without a permit. Courtesy of Valery Rizzo hide caption 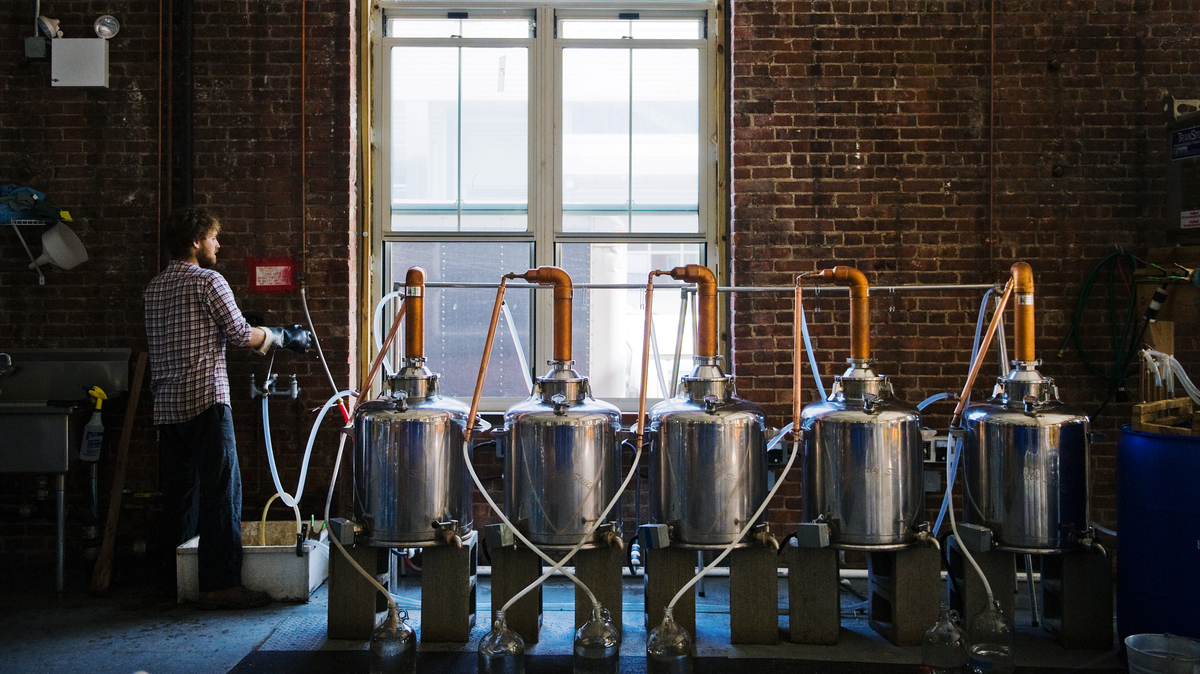 A worker at New York's Kings County Distillery, which opened in 2010. Before going legit with the operation, co-founder Colin Spoelman (not pictured) learned to make moonshine in his Brooklyn apartment without a permit.

Within days after each season premiere and season finale of the Discovery Channel's reality show "Moonshiners," they come — a small but perceptible wave of people — to purchase suspiciously large amounts of corn, sugar and hardy strains of fermenting yeast at Austin Homebrew Supply.

"We know what they're up to," says Chris Ellison, the manager of the Texas store.

That is, it's obvious they're planning to ferment the sugars from grain or fruit juice into alcohol, then distill the resulting midstrength beverage into high-alcohol hooch.

Making spirits at home with plans to drink it is against federal law. Only with the right permits may a person make ethanol, either for use strictly as fuel, or as part of a commercial endeavor — like launching a craft spirits company, of which hundreds have opened nationwide in recent years.

Yet more and more people seem to be making home moonshine, according to sources.

"The interest level is growing rapidly," says Gary Robinson, owner of Moonshine Still Pro, a supplier in Missouri. Robinson sells stills — which are perfectly legal to own — from roughly 3 gallons in capacity to about 13. He ships to all states, but the core regions of his business are the traditional Southeastern moonshine districts and the West Coast.

Mike Haney, owner of Hillbilly Stills in Barlow, Ky., says his sales of ethanol stills have doubled every year for three years since he opened. "Just that someone buys a still doesn't mean they're out to break the law," Haney points out. "A lot of people are making fuel."

"But they might be aging wine in them, or just buying everclear from a supermarket and putting that in the barrel," he says. "Anyone can buy a barrel."

Haney reports that the distilling business seems to be booming globally. He recently shipped equipment to startup distilleries in China and Sweden.

And interest in distilling is on the rise in Portland, Ore., too, according to Duke Geren, of F.H. Steinbart home-brew supplies shop. Geren says many customers seem to be inspired by Discovery's popular ongoing television docudrama, now in its third season. Many others, Geren says, are recent immigrants from Eastern Europe wishing to keep alive old traditions of making chacha, rakya, ouzo, vodka, firewater and grappa.

"People have brought me some very interesting stuff to try," Geren says.

Yet he says he and his colleagues, when they sell a still, must assume that customers are interested in making perfumes, distilled water or some other legal liquid.

When customers let on that they want to make hooch, Geren says he must curb the conversation to remain within the bounds of the law.

"We can discuss with them how spirits are made, but we can't give advice," Geren says. To that end, he may suggest instructional books — like The Alaskan Bootlegger's Bible and Moonshine Made Simple.

Besides the legal issues involved, there are also health concerns to worry about. Moonshine can become tainted with toxic liquids, especially methanol, the form of alcohol reputed to cause blindness and death. Making moonshine also poses obvious risks of fire or explosion.

Laws against moonshine may place those who wish to make their own line of commercial brandy or other spirit in a tricky situation. Robinson, at Moonshine Still Pro, likens existing distillation laws to a sort of Catch-22.

Haney, at Hillbilly Stills, says he guesses most professional distillers first dabbled in their craft illegally.

Colin Spoelman, for one, tells The Salt he learned to make moonshine in his Brooklyn apartment in 2008 without a permit before deciding to make the operation legit.

"Eventually, we got a license to make it legal to do what we were already doing," says Spoelman, co-founder of Kings County Distillery.

While most states prohibit home moonshining, state laws sometimes conflict with federal law. In Missouri, for example, a person 21 or over may produce up to 100 gallons of spirits per year for personal consumption without a permit.

But federal law trumps state law, and to the feds, distilling at home for personal consumption is illegal, period.

"If you distill without permits, you're looking at roughly a dozen felonies," says Tom Hogue, spokesman for the Alcohol and Tobacco Tax and Trade Bureau. "It's not something you want to be doing."