Accessibility links
Should Farmers Give John Deere And Monsanto Their Data? : The Salt Farmers can now deliver data from their fields, minute by minute, to big agribusiness companies like Monsanto or John Deere. Those companies promise to use the data to help farmers make money. But some farmers worry that it could threaten their privacy and give the big companies too much power. 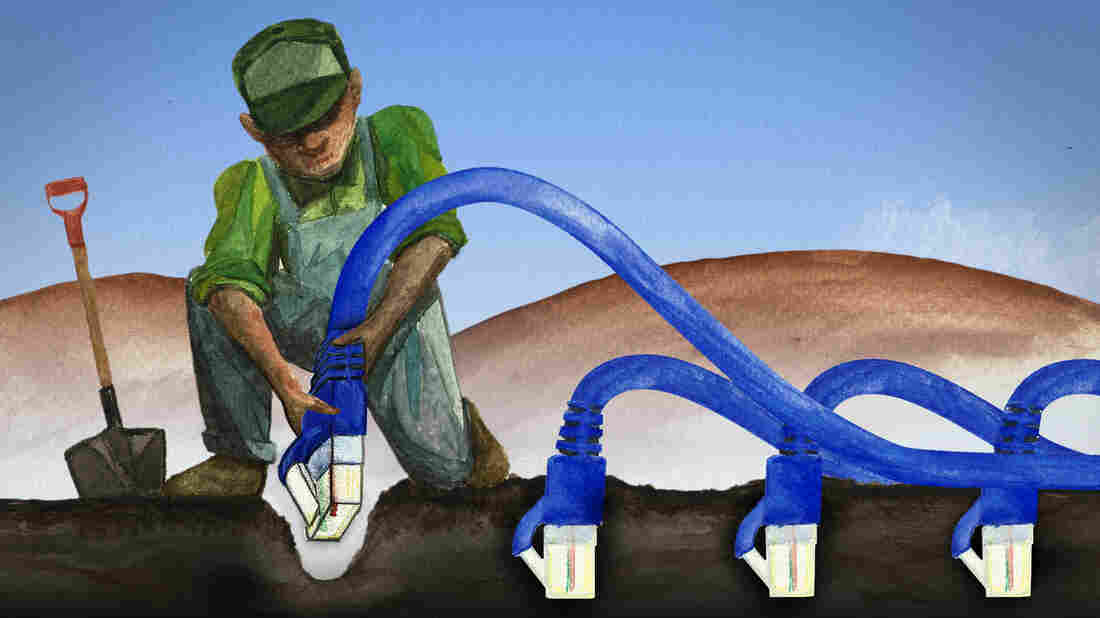 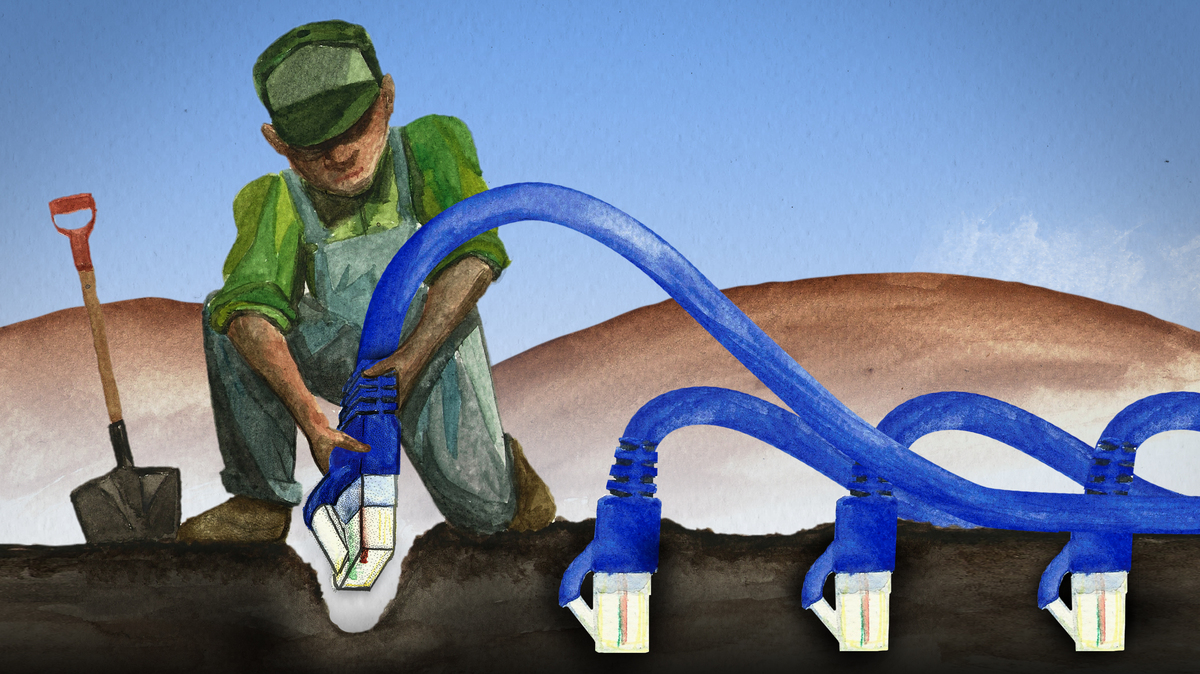 Starting this year, farmers across the Midwest can sign up for a service that lets big agribusiness collect data from their farms, minute by minute, as they plant and harvest their crops.

Monsanto and John Deere are offering competing versions of this service. Both are promising to mine that data for tips that will put more money in farmers' pockets.

But a leading farm organization, the American Farm Bureau Federation, is telling farmers to be cautious. These services, it says, could threaten farmers' privacy and give the big companies too much power.

The data in question come from detailed maps of farmers' fields.

Jonathan Quinn, who grows corn, soybeans and wheat on a large farm in northeast Maryland, pulls out a thick binder, opens it up on his kitchen table, and shows me an example. The rectangular outline of one field is covered with multicolored curved shapes, like a weather map showing areas of different temperatures.

The amount of variation is astonishing. It happens because soil types vary, even within a single field. So does moisture. 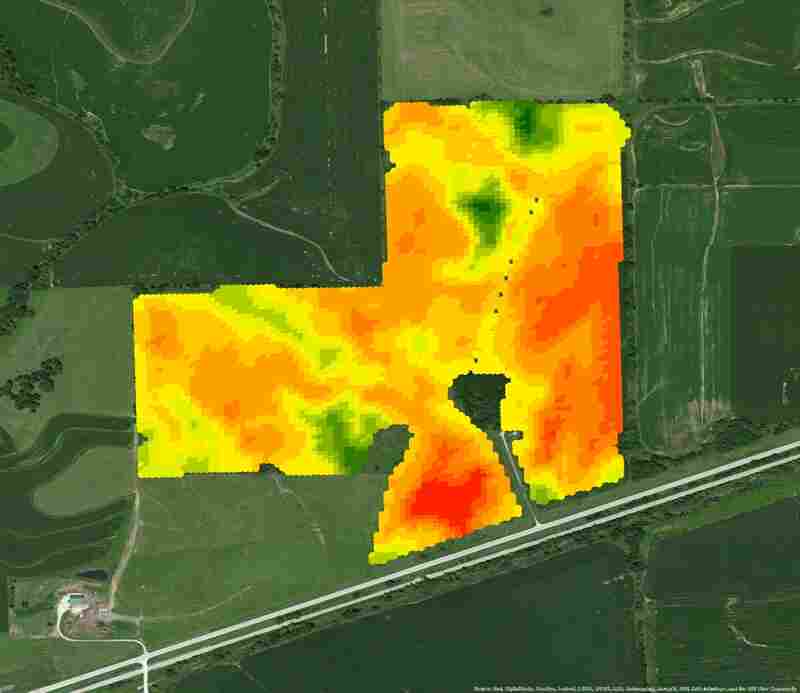 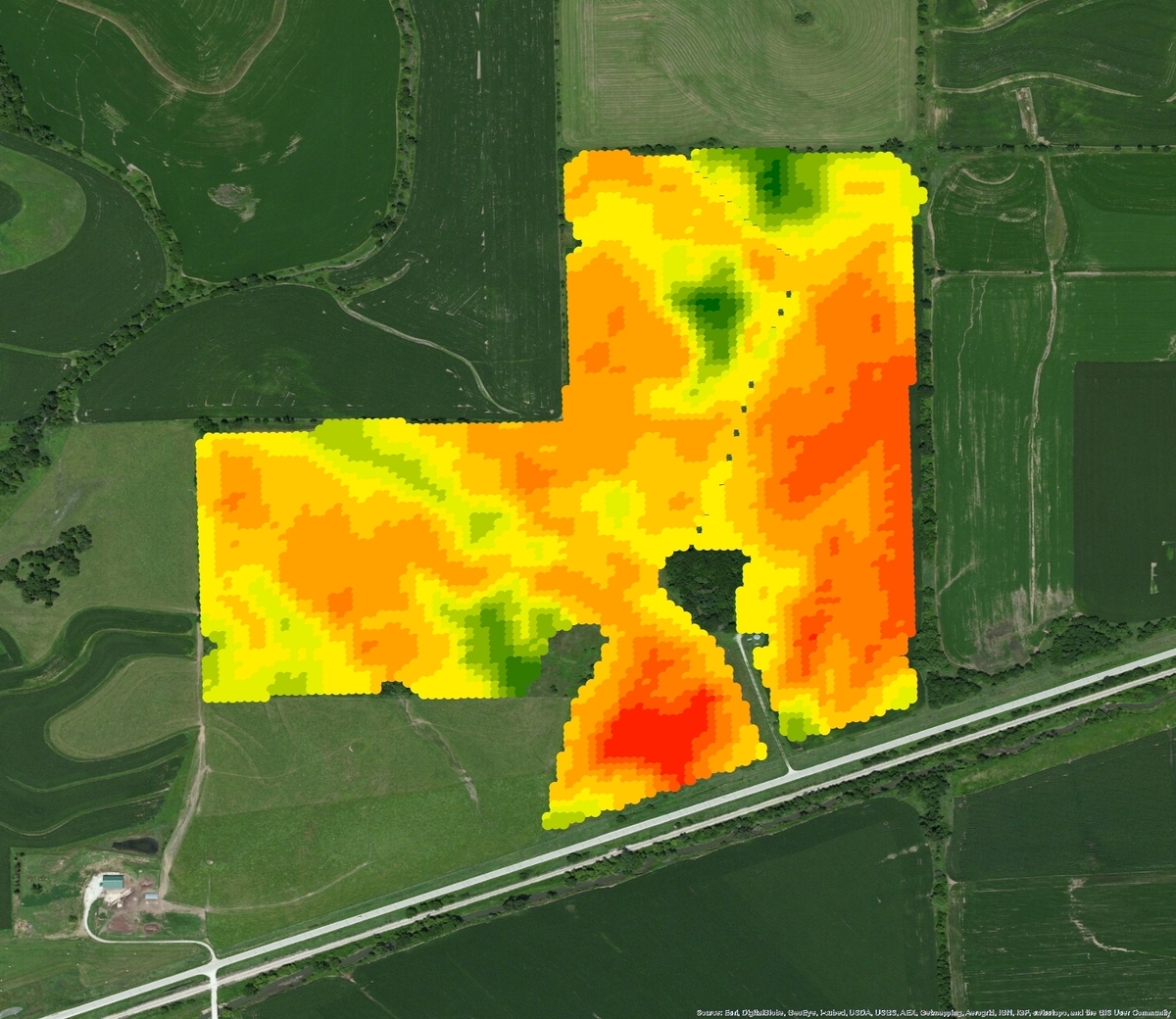 Each box on this Monsanto FieldScripts map represents an 18-by-18-foot unit of field. The colors represent different planting rates.

Quinn pulls out the machine that collects the data for this map. It's a superaccurate GPS receiver — an oversize version of the kind you'd have in your car. At harvest time, it goes along in the combine, recording how much grain comes from every spot.

Later, at planting time, the receiver controls the planting machinery, placing seeds closer together where the soil is more fertile, or switching seed varieties to match conditions in different parts of the field.

Essentially, the planter is following a pre-programmed "prescription" for each part of the field. "It's all done on software," Quinn explains. "It's loaded onto a thumb drive; you stick the thumb drive into this [GPS display], and when you drive across the field, it automatically knows where it is because of the GPS."

Until now, all this information about his planting and harvest stayed in Quinn's hands.

But this year, he's taking the next technological step, participating in an experimental version of the data-sharing system that Monsanto is rolling out commercially in the Midwest.

Monsanto thinks it can help farmers come up with the perfect prescription of seeds for their soil and weather because the company will have more data than any one farmer can collect or analyze. It will have more detailed soil maps and information from many other fields with similar soil conditions. 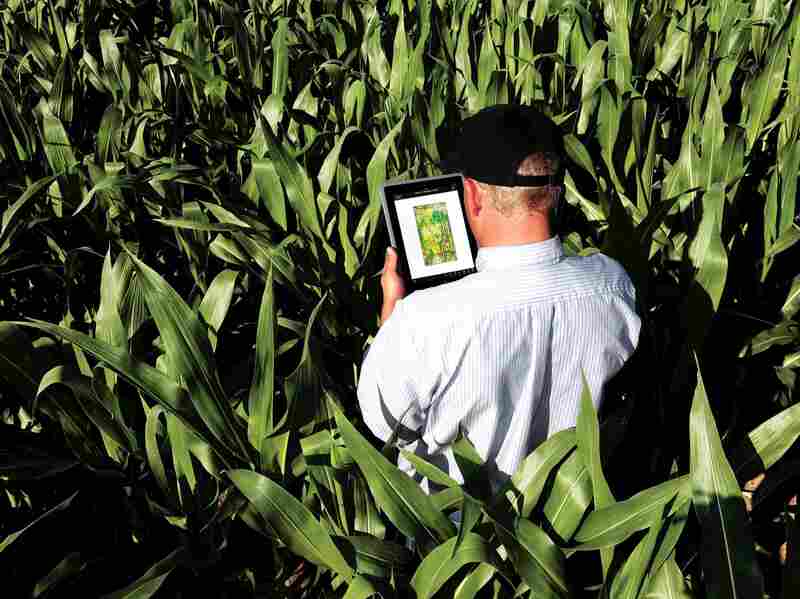 Companies, like John Deere, that are collecting farmers' data may be able to see how much grain is being harvested, minute by minute, from tens of thousands of fields. Steve Dolan/Visual Services-East Moline hide caption 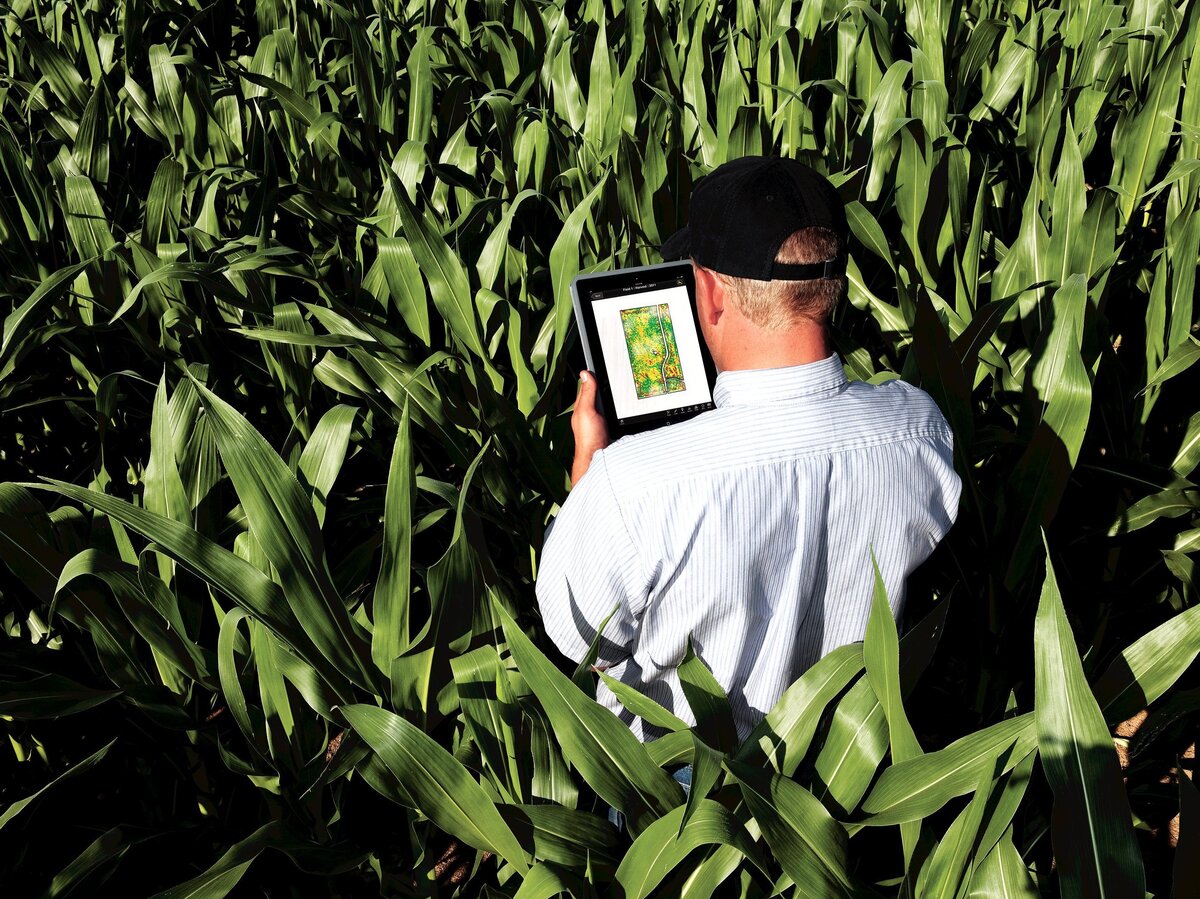 Companies, like John Deere, that are collecting farmers' data may be able to see how much grain is being harvested, minute by minute, from tens of thousands of fields.

Eventually, it will have field-by-field weather predictions from a high-tech venture called the Climate Corp., which Monsanto bought last year for $1 billion. (The New Yorker published an interesting profile of the Climate Corp. last November.)

"I've had people ask me, 'Why should Monsanto have all your information?' " Quinn says. "My theory is, if they have my information, and they're out there working with me, I'm hoping that they're going to bring me a better product. And them having my information doesn't bother me."

John Deere, the big farm machinery company, is offering something similar in collaboration with other big seed companies.

Both companies are promoting this as a better version of what farmers do already. But the American Farm Bureau Federation is telling its members: Be careful. This is different.

Mary Kay Thatcher, the farm bureau's senior director for congressional relations, says farmers should understand that when data move into the cloud, they can go anywhere.

For instance: Your local seed salesman might get the data, and he may also be a farmer — and thus your competitor, bidding against you for land that you both want to rent. "All of a sudden he's got a whole lot of information about your capabilities," Thatcher says.

Or consider this: Companies that are collecting these data may be able to see how much grain is being harvested, minute by minute, from tens of thousands of fields. That's valuable information, Thatcher says. "They could actually manipulate the market with it. They only have to know the information about what is actually happening with harvest minutes before somebody else knows it. I'm not saying they will," says Thatcher. "Just a concern."

Both Monsanto and John Deere say that they'll share an individual farmer's data only with people whom that farmer wants to see the information.

"In our mind, that data is just as important as a person's banking information," says Chris Batdorf, a manager with John Deere's Intelligent Solutions Group.

Batdorf also says that his company won't use the overall, aggregated data — for instance, harvest totals from whole groups of farms — to play in commodity markets. "John Deere will not do that," he says. "We don't want to do anything with markets or forecasting with this data." A Monsanto spokesperson said the same.

But many of the rules for how these data will be shared, and how they can be used, haven't been written yet. These data collection programs are just getting off the ground, and they're still evolving.