Accessibility links
An Innovative Plan To Reel In Sport Fishermen To Feed The Hungry : The Salt Fish is an important part of a healthful diet, but it can be hard to come by for groups that feed the hungry. A brand-new scheme being launched this week in Maine aims to change that, by getting the state's many sport fishermen to donate catch that would otherwise be discarded. 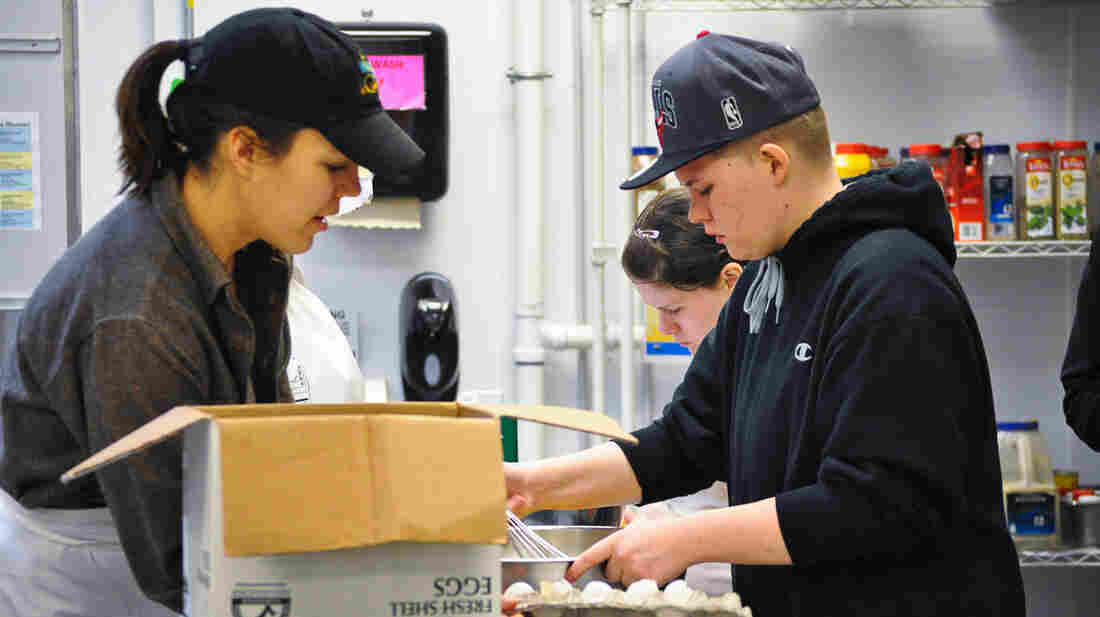 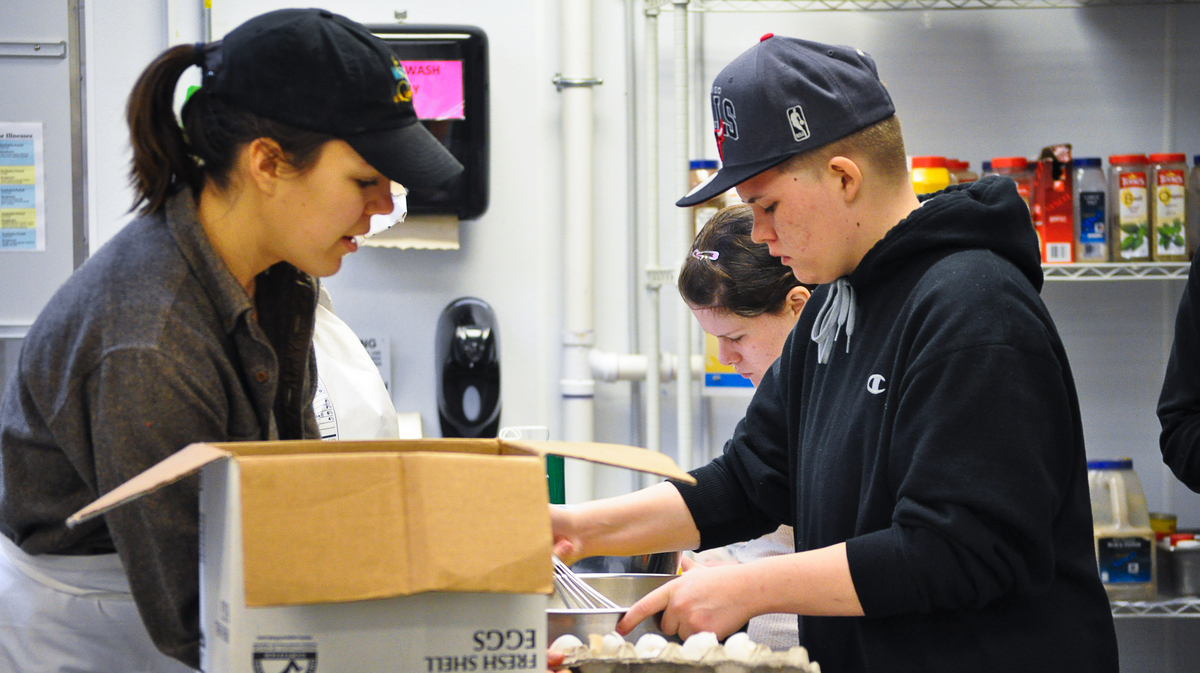 Portland, Maine, native Hollis McLaughlin's recollection of his mother's fish cookery produces a wistful expression as he takes a bite of the fish cakes given to him as part of the regular Wednesday night meal he is served free of charge at the Parkside Neighborhood Center.

McLaughlin's mother, Kay, worked for over 30 years on Portland's waterfront, picking lobster and crab and packing sardines. And she made fish cakes, too, for her eight children from whatever white fish was available on any particular day.

But she certainly didn't use the Martha Stewart recipe that Carly Milkowski, resource coordinator at Wayside Food Services, a hunger relief operation, tapped as the basic formula for the 100 fish cakes served to the 30 or so clients last Wednesday at Parkside.

The 62-year-old McLaughlin diplomatically refused to say which fish cake he liked better. "But I'm having seconds of these now," he said, adding that he'd love to have more fish in general on his plate at any of the free meals he receives weekly around the city.

McLaughlin may soon get his wish, thanks to an innovative new partnership between Wayside and the Maine Chapter of Hunters for the Hungry, a national organization that matches up hunters who harvest more game than they can consume themselves with soup kitchens and food pantries that need proteins of all kinds to feed their patrons. 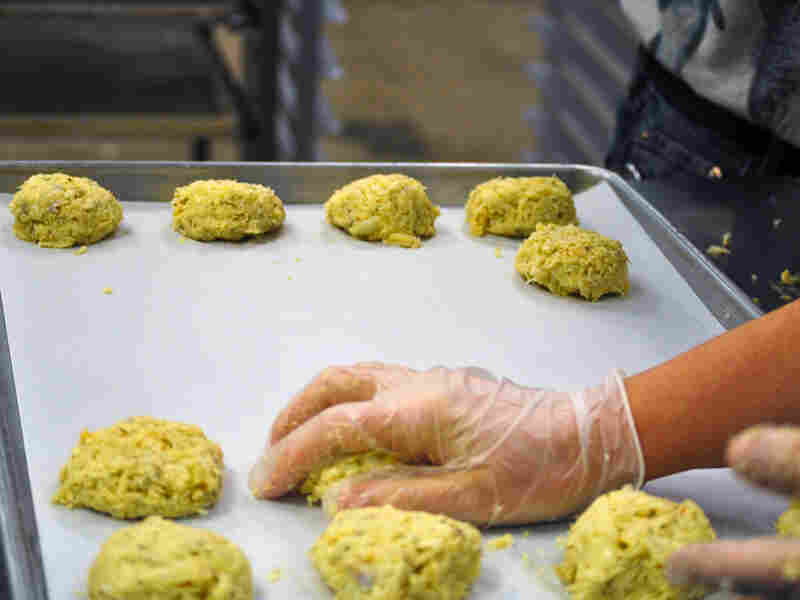 Students prepare fish cakes that will be part of a free dinner offered at Parkside Neighborhood Center in Portland, Maine. Courtesy of Samantha Laster hide caption 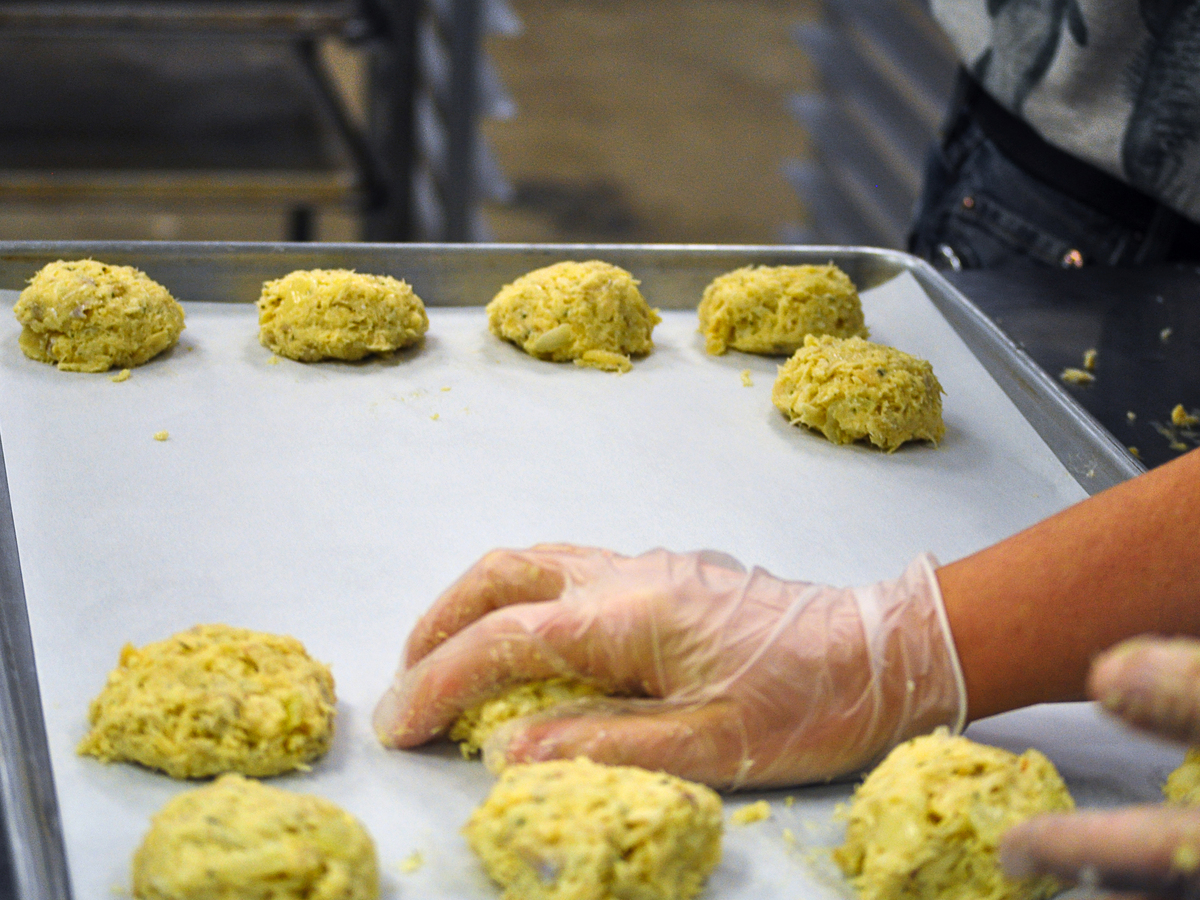 Students prepare fish cakes that will be part of a free dinner offered at Parkside Neighborhood Center in Portland, Maine.

The Maine Hunters for the Hungry program is one of the few administered by the state government. The state department of agriculture and food assistance foots the bill to process the meat, which then gets distributed.

Since 1996, the program has accepted bear, deer and moose donations. This year the total take was 5,500 pounds of game. But a brand-new scheme being launched this week will bring sport fishermen into the fold — and hopefully, a lot more fish into soup kitchens that help feed the hungry.

That's a big deal, because despite its importance to a healthful diet, fish can be hard to come by for food assistance organizations like Wayside.

Wayside rescues food and prepares it into meals that are served at community centers and churches throughout the city. Don Morrison, Wayside's operations manager, says his group serves up to nine meals weekly, but fish is on the menu only once or twice monthly. Even with the understanding that these meals are meant to be supplemental to clients' whole diets, Morrison concedes that rate doesn't make a big dent in the USDA recommendation of two servings of fish weekly.

Morrison needs about 100 pounds of fish to produce the 500 meals that Wayside distributes to its lunch and dinner clients, mostly working poor, in any given week. Currently, he relies on periodic fish donations from Sysco, local fishmongers Harbor Fish and Brown Trading Co., and Salt & Sea, a community-supported fishery.

"The barriers to rescuing good fish are high because of its short shelf life," says Morrison. Partner wholesale and retail suppliers currently work with Morrison to freeze fish for Wayside that would go off before their next retail opportunity.

"We're getting great fish. But it takes a while to add up to the volume we need," he says, adding that multispecies dishes like fish cakes, casseroles and chowders make it to the menu most frequently.

Morrison hatched a new fish acquisition plan with Jason T. Hall, director of the state's emergency food assistance program: They decided to harness the fish that gets wasted at the state's many fishing derbies.

"There are only a couple of winners at each derby," explains Hall. "But hundreds of fishermen are pulling up and holding onto their three biggest fishes until the end of the day, when the judging takes place." The losing fishes — most often brown and brook trout — are often just discarded.

The pair will be setting up a tent at both the Crystal Lake Ice Fishing Derby in New Gloucester on Jan. 25 and the Sebago Lake Rotary Ice Fishing Derby on Feb. 15-16. Donated fish will be put on ice and brought to Salt & Sea's facility to be filleted.

It's not yet known how much fish these efforts will yield, but Morrison and Hall are hoping to pull in about 150 pounds of fish at Crystal Lake. And they have both heard rumors of upwards of 1,500 pounds of fish going to waste at last year's Sebago Lake event.

"Those are the ones we want to catch," says Morrison, an avid all-season fisherman and most-of-the-time pescatarian.

Morrison also has his eyes on the big ocean fishing competitions that take place throughout the Casco Bay region in the summer.