Accessibility links
Turns Out The Ancient Greeks Were Quite The Grill Masters : The Salt For a long time, archaeologists weren't sure what to make of the cookware excavated at ancient Mycenaean ruins in Greece. That is, until one researcher built replicas of the vessels to try to cook just like the Mycenaeans did.

Turns Out The Ancient Greeks Were Quite The Grill Masters

Turns Out The Ancient Greeks Were Quite The Grill Masters 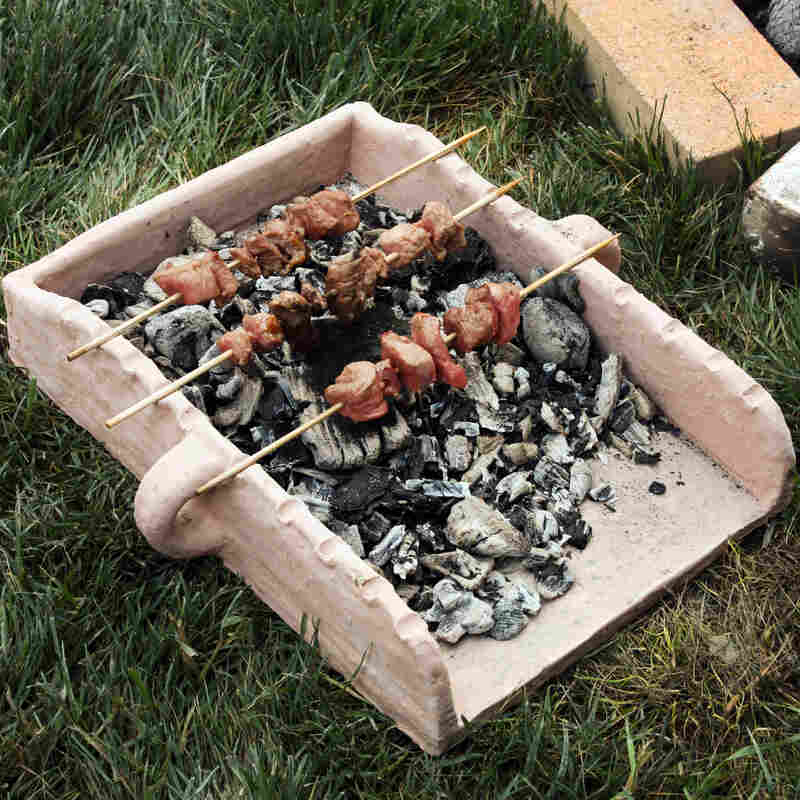 Souvlaki skewers in a replica of a tray the Mycenaeans used to prepare their food in ancient Greece. Courtesy of Julie Hruby hide caption 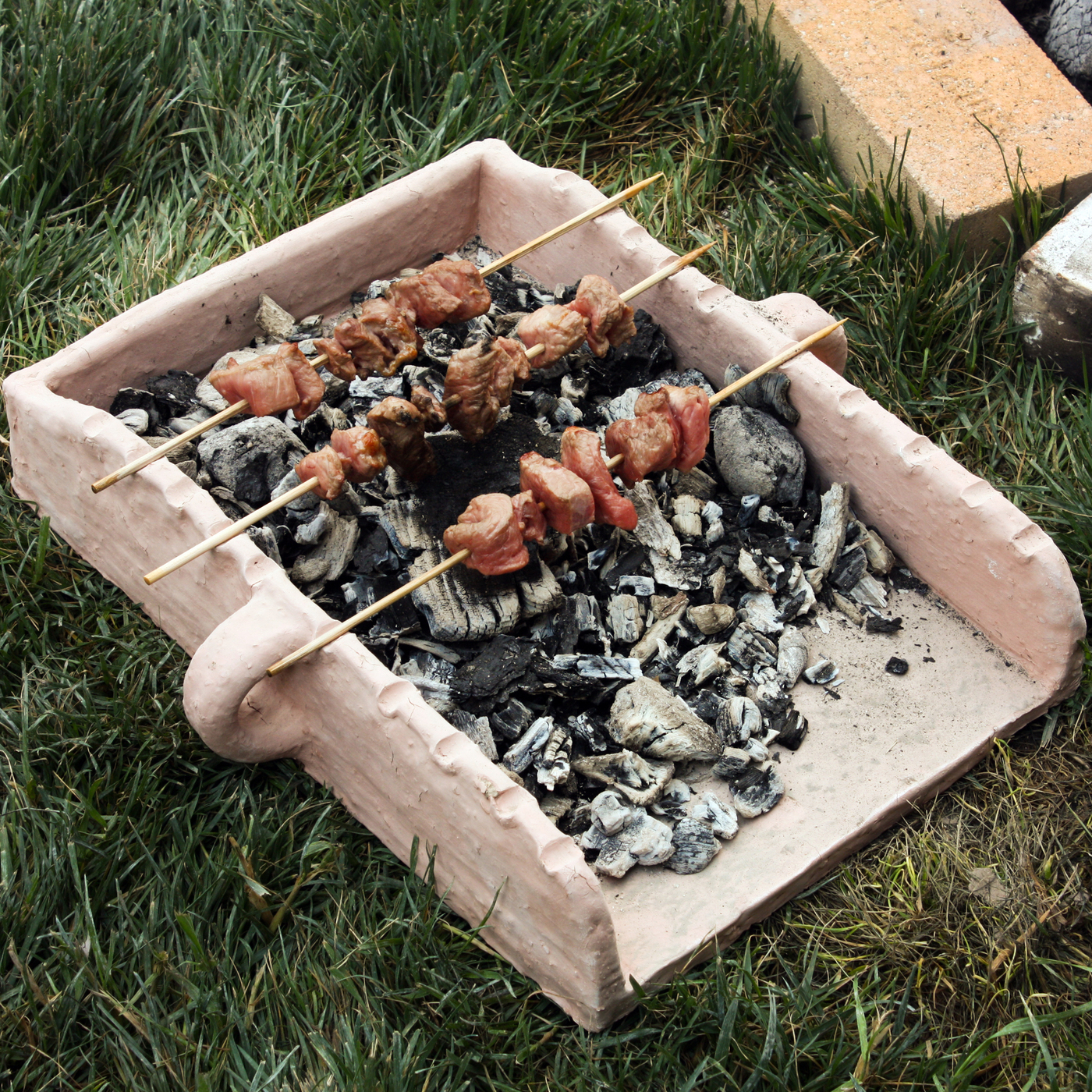 Souvlaki skewers in a replica of a tray the Mycenaeans used to prepare their food in ancient Greece.

Mycenaean civilization, the forerunner to classical Greece and the backdrop for the Illiad and the Odyssey, is best known for its lavish palaces and treasure-filled tombs.

But thanks to one enterprising researcher, we've learned that the Mycenaeans also knew how to throw a pretty mean barbeque.

For a long time, archaeologists couldn't figure out how ancient Greeks used the cookware found at excavation sites from the Mycenaean period, which lasted from 1600 to 1100 B.C.

The mysterious wares included ceramic trays for skewered meat — known as souvlaki in Greece. But archaeologists disagreed over whether the trays were meant to be placed over a fire to catch drippings, or if they worked more like a portable barbeque pits to hold coals.

They also found griddles they assumed were for making bread. On one side, the griddles were smooth, with the opposite side textured with small perforations. The archaeologists weren't sure which side went up.

So Julie Hruby, an assistant professor of classics at Dartmouth College, decided to investigate — by attempting to cook Mycenaean style. Hruby, along with ceramicist Connie Podleski, re-created the cookware and got to grilling. Hruby says it wasn't easy to find materials that resembled ancient Greek clay. And sculpting without a potter's wheel took a long time.

But the effort was well worth it to uncover the ancient Greek grilling technique. When they tried placing the souvlaki trays on top of hot coals, the meat didn't get hot enough. But when they put the coals directly in the pan, the meat cooked perfectly. 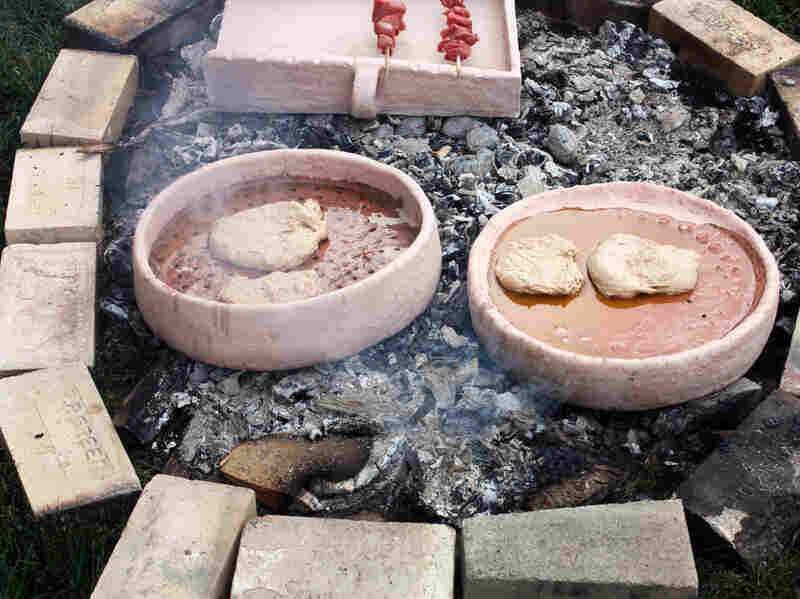 A replica of a perforated griddle is filled with dough to demonstrate how the ancient Greeks made bread. Courtesy of Julie Hruby hide caption 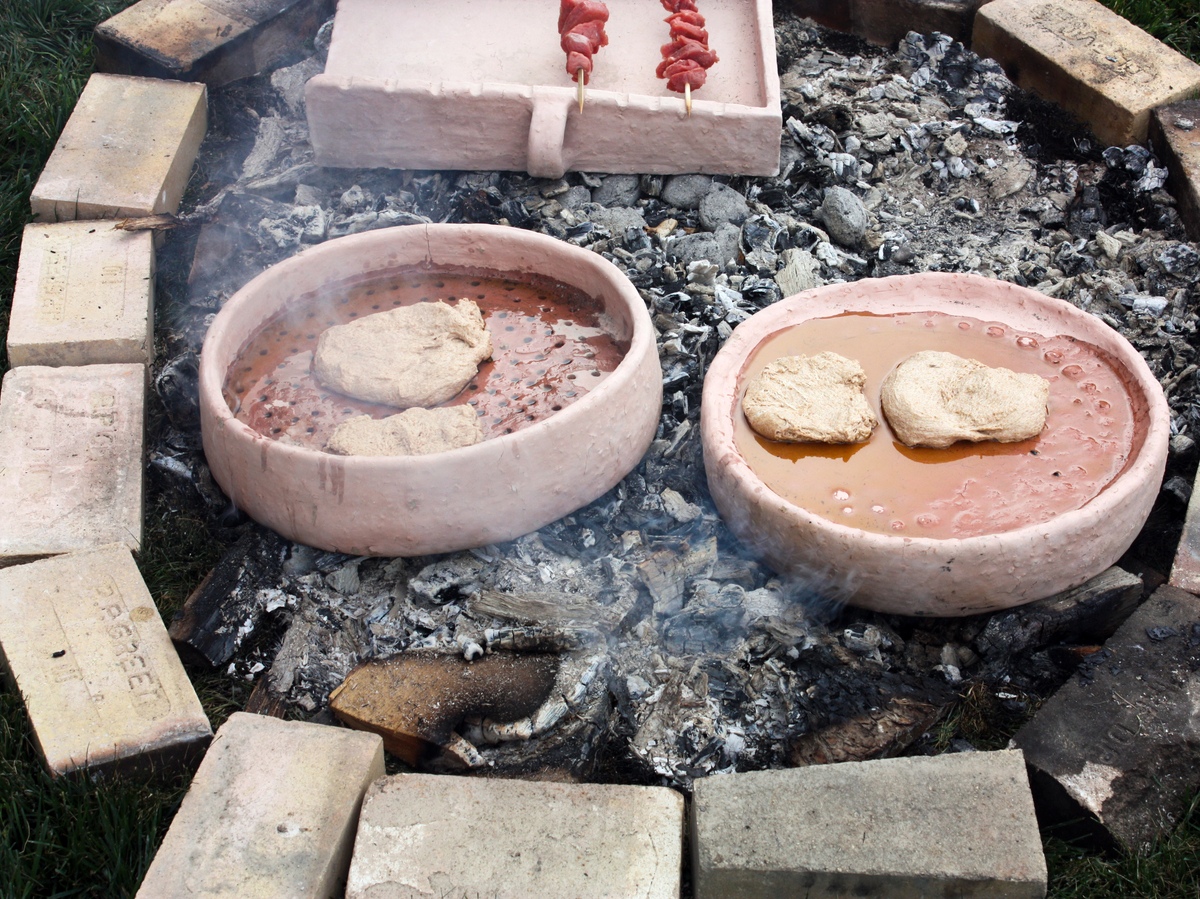 A replica of a perforated griddle is filled with dough to demonstrate how the ancient Greeks made bread.

As one of Hruby's colleagues, Bartek Lis from the Polish Academy of Sciences, had guessed, the souvlaki tray was designed to be portable. "The trays would have been good for travel or picnics," Hruby tells The Salt.

Portable cookware was pretty cutting-edge for the Myceneans, since most of their meals were prepared over a large hearth. And though the ancient grills were made out of clay, they were inconveniently heavy. So the Mycenaeans' grill wasn't too different than the ones we use now for tailgating.

As for the griddles, Hruby and Podleski realized the perforations were actually an ancient non-stick technology. When covered in a couple of cups of oil, the textured griddle made a nice flatbread. It was pretty advanced for its time, as Hruby noted at the Archaeological Institute of America's annual meeting, where she presented the findings earlier this month.

Because these types of vessels appear most among the ruins of large palaces, Hruby figures that they were primarily used by professional cooks who worked for the nobility.

Ancient tablets also give us an idea about what ingredients the Myceneans had available. Hruby says they might have eaten beef, pork or mutton as their protein. For their bread, they probably noshed on wheat, barley or emmer, a type of farro.

But despite what now seems like a relatively simple diet, Hruby says that the Mycenean palaces fostered a lot of culinary innovation. Before the Mycenean age, and even during, Hruby says, a lot of the cooking was done in jars.

So next time you fire up your grill at a tailgate party or indulge in a quick bite of souvlaki from the local Greek joint, the ancient Myceneans are probably looking on with pride.