Accessibility links
Farm Bill Charts New Course For Nation's Farmers : The Salt The House on Wednesday approved a five-year compromise farm, signalling perhaps the final stretch for a two-year legislative battle. Because so much of the spending in the measure depends on enrollment in programs like food stamps, it's hard to know if it will save taxpayers money. 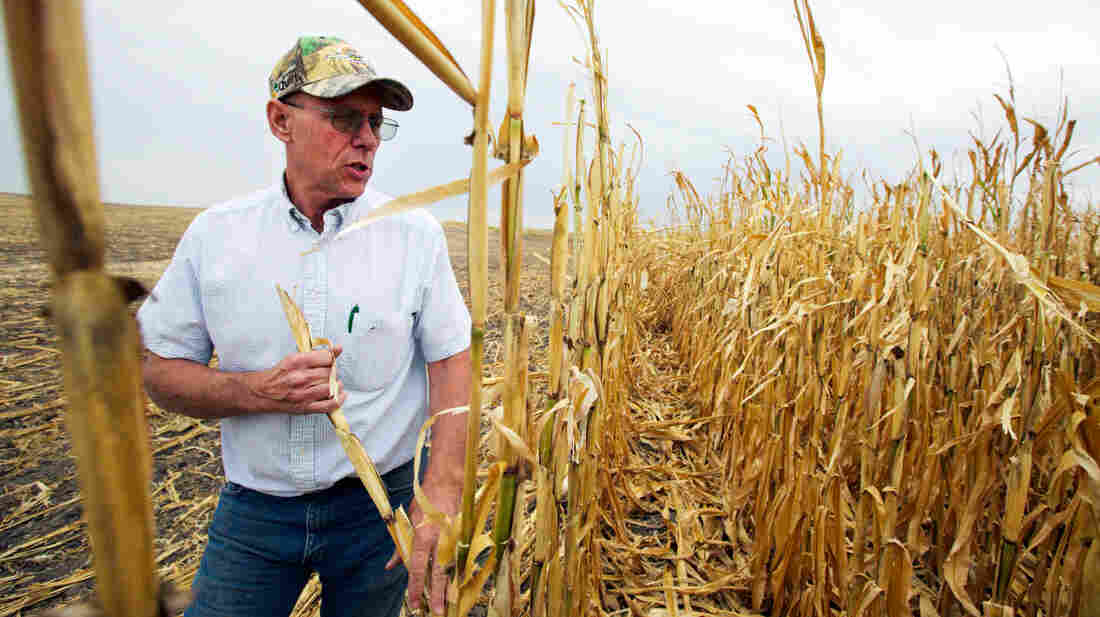 Farmer Steve Henry of Arapahoe, Neb., looks at a patch of corn that failed due to drought last September. The new farm bill would expand crop insurance for farmers. Nati Harnik/AP hide caption 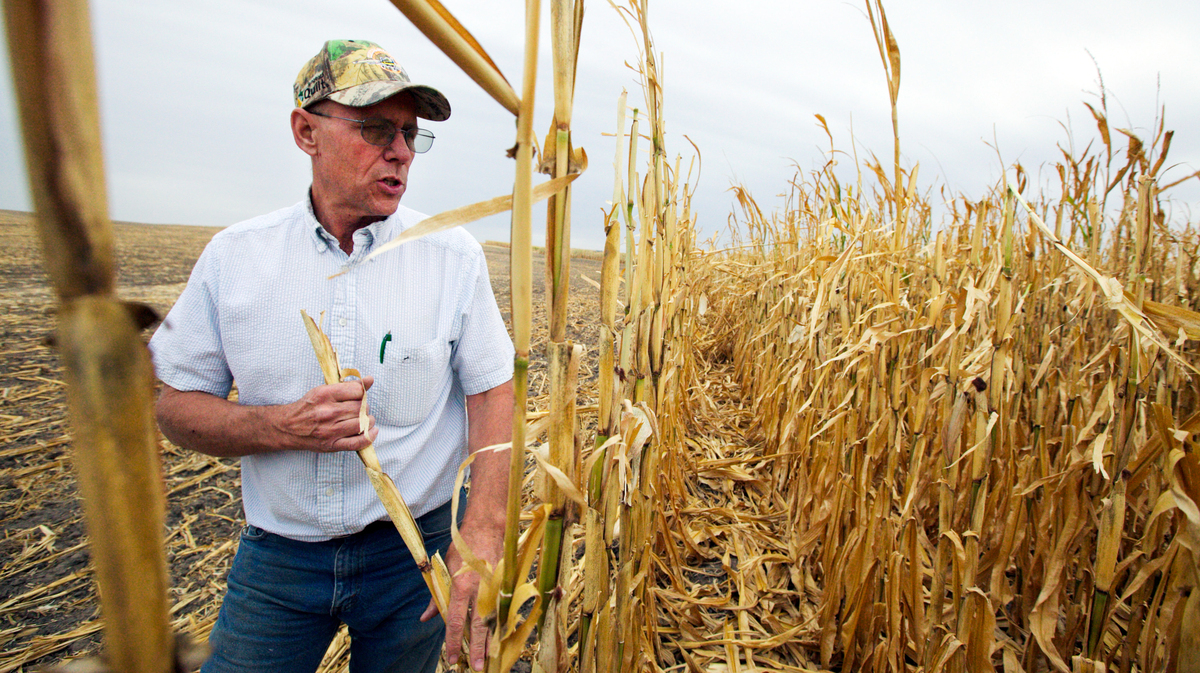 Farmer Steve Henry of Arapahoe, Neb., looks at a patch of corn that failed due to drought last September. The new farm bill would expand crop insurance for farmers.

The House on Wednesday passed a new five-year compromise farm bill. The bill now moves to the Senate for a vote.

The farm bill — the result of a two-year-long legislative saga — remains massive. The bill contains about $500 billion in funding, most of which is pegged to the food stamp program, officially called the Supplemental Nutrition Assistance Program (SNAP).

But the farm bill, as you might expect, also charts agricultural policy for the nation's farmers. And the farm programs within this farm bill have been hotly contested.

Altering The Farm Safety Net: Perhaps the most significant change to agricultural policy this farm bill would make is ending the subsidy known as direct payments – government payments to farmers based only on the number of acres of farmland they own, not on the condition of their crop. Instead, crop insurance will become the bedrock of the federal farm safety net.

The new bill would expand crop insurance and continue to subsidize farmers' plans. Under the program, the federal government covers losses from slips in revenue or crop yield.

Ultimately, it's impossible to know how much crop insurance will cost in the future, as payouts depend largely on the weather. Payments are high in times of drought or unseasonable cold.

"If we have good weather over the next five years, the government will spend less on farm programs than they have historically," said Art Barnaby, an agricultural economist at Kansas State University.

Of course, a repeat of the 2012 drought would cause crop insurance payments to skyrocket.

The Meat Industry Isn't Cool About COOL: If many commodity crop farmers are pleased with this version of the farm bill, many in the meat industry are not.

Some of the largest meat industry groups say they oppose the compromise farm bill, in part because it fails to strip out rules for country of origin labeling, known as COOL. Under the rules, which are currently on the books, meatpackers have to label where animals were born, raised and slaughtered.

"They basically slapped the face of the livestock industries in this country," said Scott George, a Wyoming rancher and president of the National Cattlemen's Beef Association.

Other groups that oppose this version of the farm bill include the American Meat Institute, the National Pork Producers Council and the National Chicken Council. The groups say the rules are a bookkeeping nightmare, and having to separate animals based on where they were born is next to impossible.

"The implementation of these new standards will cost the industry in excess of $100 million," George said. "Those $100 million are going to come right out of the hands – the pockets – of the producers sitting right here on the farms and ranches."

How Much Money Is Being Saved? Ask Again Later: There's lots of money in the farm bill. And because so much of the spending depends on enrollment in programs like food stamps and even on the weather, it's hard to know if this farm bill will save taxpayers money or not. Chad Hart, an agricultural economist at Iowa State University, will be watching.

"From a taxpayer perspective, the key is 'What does it average out to be over time?'" Hart says.

And from a farmer's perspective, the vagaries of weather, pests, crop prices and market forces are all elements they balance every day. So a farm bill that embraces that is one that most farmers can live with.