Accessibility links
For A Twist On The Lunar New Year Dumpling, Add Green Tea : The Salt A Chinese cookbook author remembers her childhood in China, where dumplings were steamed to conserve precious cooking oil. Recently she gave her favorite steamed dumplings an update. 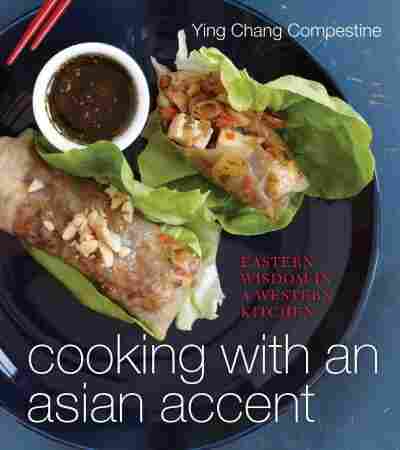 Cooking With An Asian Accent

Eastern Wisdom In A Western Kitchen

Friday is New Year's for the millions of people around the world who celebrate the Lunar New Year. This year is the Year of the Horse.

On Morning Edition, Ying Compestine, a cookbook and children's book author, talks about her favorite dish for the holiday: steamed dumplings infused with green tea. They appear in her most recent book, Cooking with an Asian Accent.

The New Year holidays of Compestine's youth were very austere. She came to the U.S. as a grad student in the 1980s, but she grew up in Maoist China.

Although children were supposed to get haircuts and new clothes — so that evil spirits wouldn't recognize them — sometimes her family couldn't afford new clothes.

Cooking for the holiday could also be tough going.

"I remember my mother ... in China, she would cook on the coal stove," Compestine says. "And first, you know, we have to go out and wait in a long line to buy the coal, and then light the stove. It's a really difficult process lighting that coal stove."

Today, Compestine's kitchen in California is outfitted with beautiful appliances.

"I can do things in one day my mother would take for weeks to do," she says.

The dish she most remembers making during her childhood in China is steamed dumplings — steamed, not fried, because oil was rationed.

"When I was writing my cookbook I decided I want to make it even more interesting, so I added the green tea in the water when I steamed my dumplings," she says. "So that gives the dumplings a very fresh, special flavor."

Compestine says she prepares a lot of other traditional dishes for the holiday — like ribs for strength, fish for abundance, long noodles for a long life, rice pudding and rice cake.

"At New Year's you always have so much food, but the dumplings [are] the center point because that's when everybody really gets to sit down to talk, to visit," she says. In her home, everyone makes their own dumplings from an assortment of meat and vegetable fillings she assembles for them. 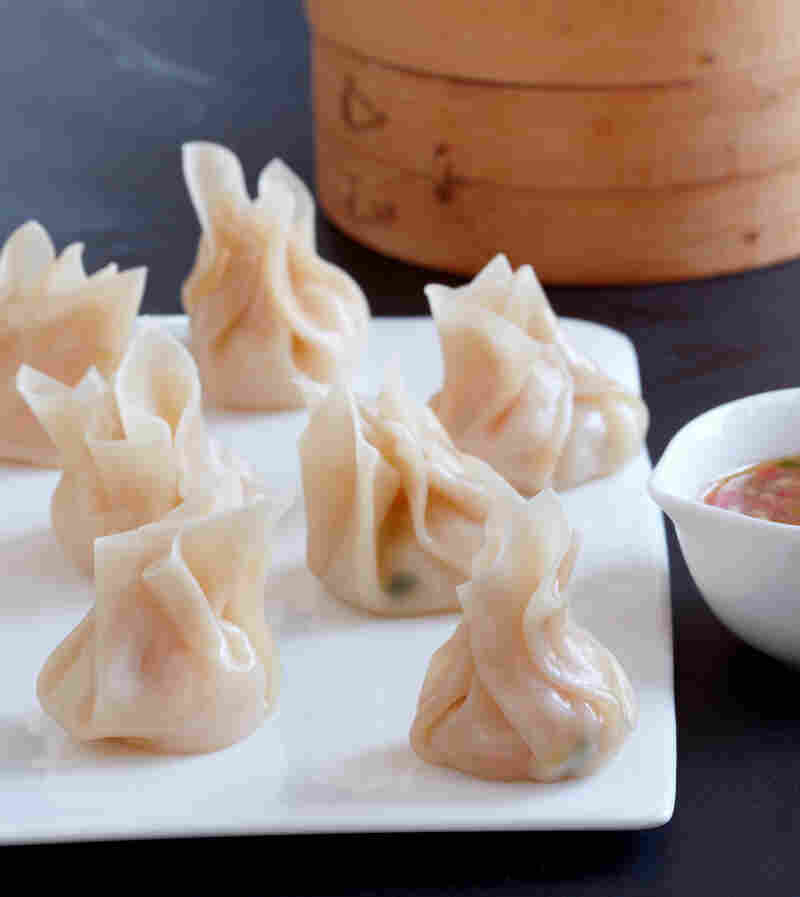 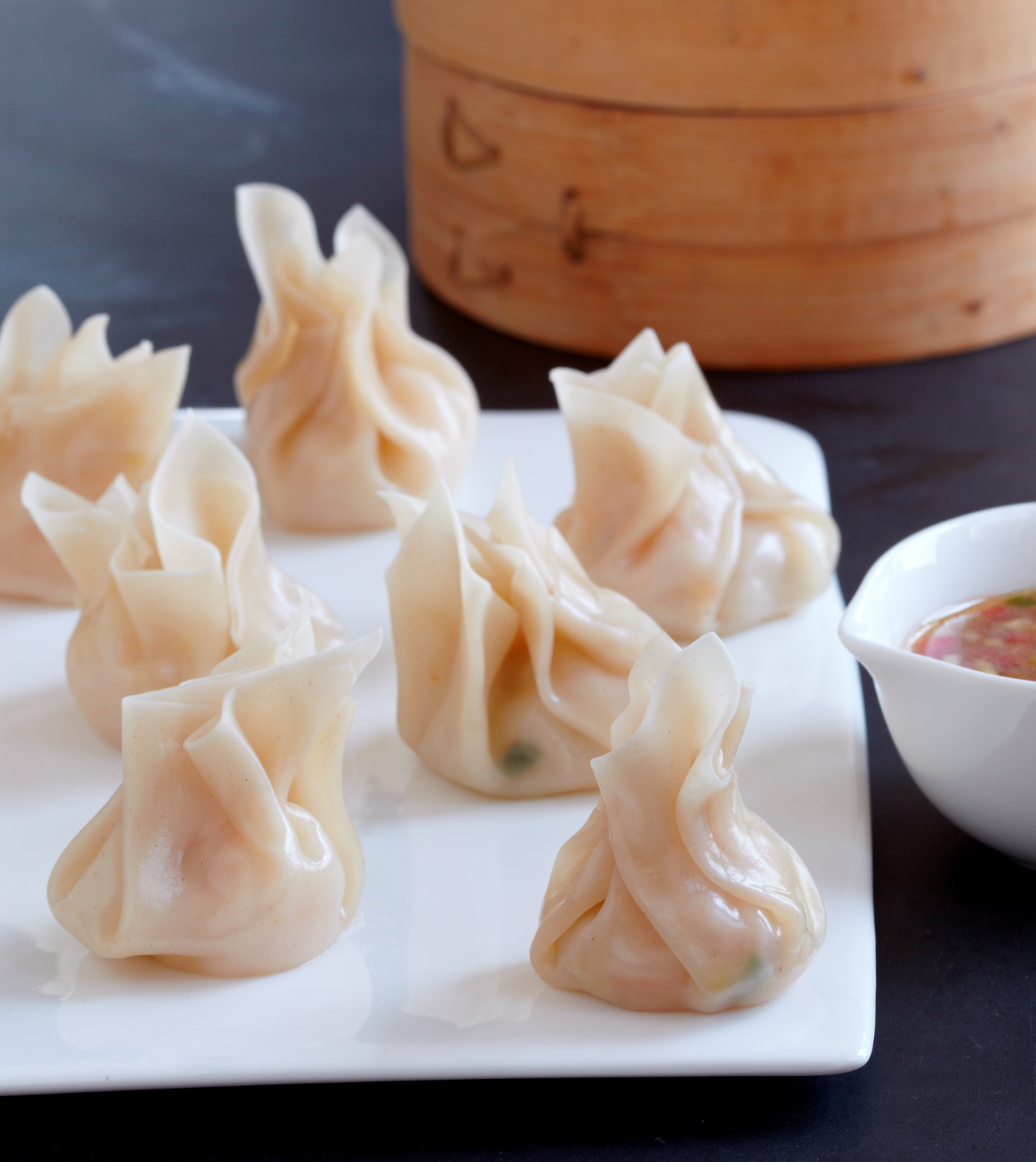 Every region in China has its own local specialties, yet no matter where you go, you can always find delicious dumplings like these. Traditionally, the steamer is greased with oil to prevent the food from sticking. I've come up with a simple, healthy method that achieves the same result, placing each one on a disk of thinly sliced carrot. Once cooked, the carrots make a sweet, tender accompaniment to the green tea–infused dumplings.

If your steamer is not large enough to steam all the dumplings at one time, you can either use stackable steamer baskets or steam the dumplings in batches.

Chili-garlic sauce, available in the Asian section of most grocery stores

1. To make the filling: Heat the oil in a wok or nonstick skillet over medium high heat. Add the ginger and leeks and sauté for about 2 minutes, or until soft.

How To Make A Chinese New Year-Worthy Potsticker

2. Combine the leek mixture with the shrimp, rice wine, pepper and salt in a large bowl and mix well.

3. Prepare a space for assembling the dumplings: a bowl of cold water, the wonton wrappers, the bowl with the filling, and the steamer basket. Cover the wrappers with a moist paper towel to prevent them from drying out as you work.

4. Arrange the carrot slices in a single layer in the steamer.

5. To assemble the dumplings: Working with one wrapper at a time, dip all four edges into the cold water. Holding the wrapper flat on your palm, place about 1 teaspoon of filling in the center of the wrapper. Bring the four corners of the wrapper up over the filling. Pinch the edges together tightly. Set each dumpling on a carrot slice, leaving a little space between each dumpling. Repeat with the remaining wrappers and filling.

6. Fill a large pot or wok with water for steaming. Bring the water to a boil. Add the tea bags to the water. Set the steamer in the pot. The water should not touch the steamer. Cover and steam until the dumpling skins are translucent, 10 to 12 minutes. Serve warm with the chili-garlic sauce.