Accessibility links
All Hail The Asparagus Queen! How Ag Pageants Lure New Contestants : The Salt Some farming communities are struggling to find enough contestants for the pageants that crown monarchs like the Asparagus Queen and Beef Queen. So they are relaxing the pageant rules to spice up the competition. 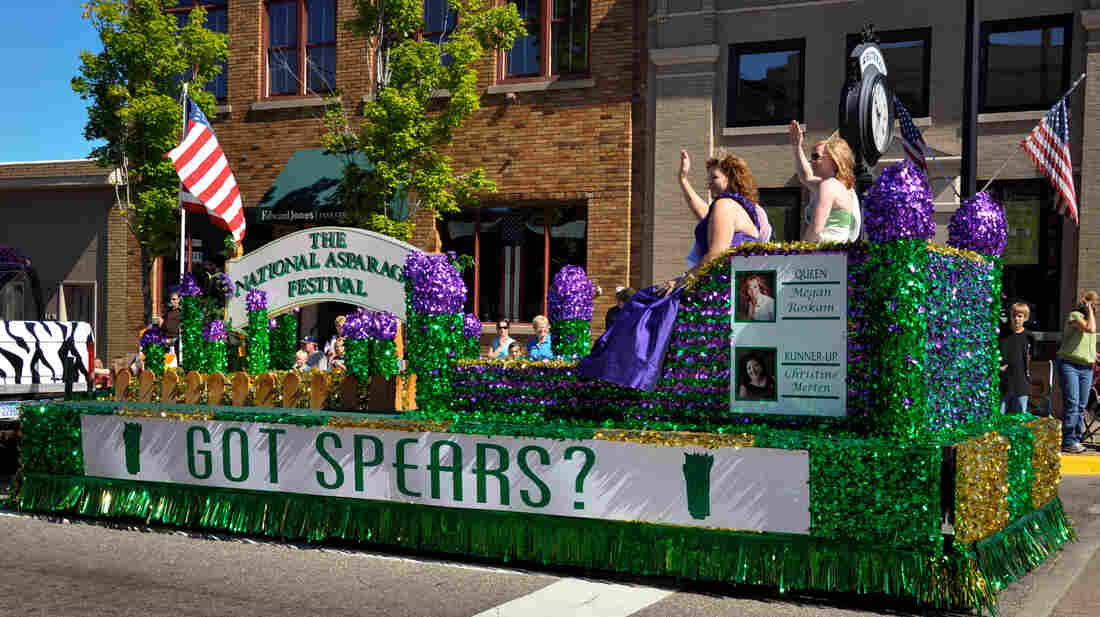 The 2011 Asparagus Queen, Megan Roskan, and runner-up Christine Merten wave to spectators during an Independence Day parade in Whitehall, Mich. With interests waning in agricultural pageants, organizers are relaxing the requirements to encourage more people to apply. Courtesy of Phil Squattrito hide caption

Think you've got what it takes to be the Asparagus Queen?

Mainstream beauty pageants still get tons of applicants every year (even after the dip in participation during the 2008 recession). The same can't be said for the rural festival pageant circuits, The Wall Street Journal's Lindsay Gellman tells Audie Cornish on All Things Considered.

Be it pecans, asparagus or watermelons, many farming communities have also had a tradition of granting their prized commodity crops their very own monarchs. However, interest among young women is waning and the crop of candidates is dwindling, says Gellman, who covered the phenomenon in a recent story.

The reason is partly financial strain — the tab for the dress, jewelry and professional makeup services can easily add up to hundreds of dollars. Gellman adds that there may also be a changing attitude toward pageants that makes them less appealing for younger women.

"The participation level is [also] an important indicator of the strength of the community engagement and pride in the cultural commodity it's tied to," says Gellman.

In Alaska, A Pageant For The Humble Spud

But local communities aren't giving up on the traditions just yet. And many have turned to changing the rules to spice up the competition.

Put Some Sizzle In Your Halloween Costume ... With Sausage?

Take, for example, the annual pageant held by the National Asparagus Festival in Oceana, Mich.

For years, the title of Mrs. Asparagus was traditionally reserved for farmers' wives. But there wasn't much of a competition two years ago when one of only two participants dropped out at the last minute. By default, the crown went to the one remaining candidate.

"The goal of this pageant is to select a farmer's wife-type to represent the asparagus industry," Gellman says. "And so to not have a choice of women is very awkward."

So organizers decided to throw out the wedding ring requirement, change the title to Asparagus Queen and open up the competition to both single and married women.

They're not the only ones, though. Other pageants are also finding ways to garner more interest: The Ohio Beef Queen has become the gender-neutral Ohio Beef Ambassador; Ms. Kumquat is now crowned alongside a Mr. Kumquat in Dade City, Fla. And the board members of Louisiana's Shrimp and Petroleum Festival are personally calling up qualified young women to compete.

The number of applicants for the Shrimp and Petroleum Queen rose because, Gellman says, "It's very hard to turn down a personal telephone invitation."