Accessibility links
Wine Wisdom With A Wink: A Slacker's Guide To Selecting Vino : The Salt Bewildered in the wine aisle or staring at a wine menu? A cheeky chart offers solid advice on getting the most bang for your buck, whether you're looking for wines to cook, date or get drunk with. 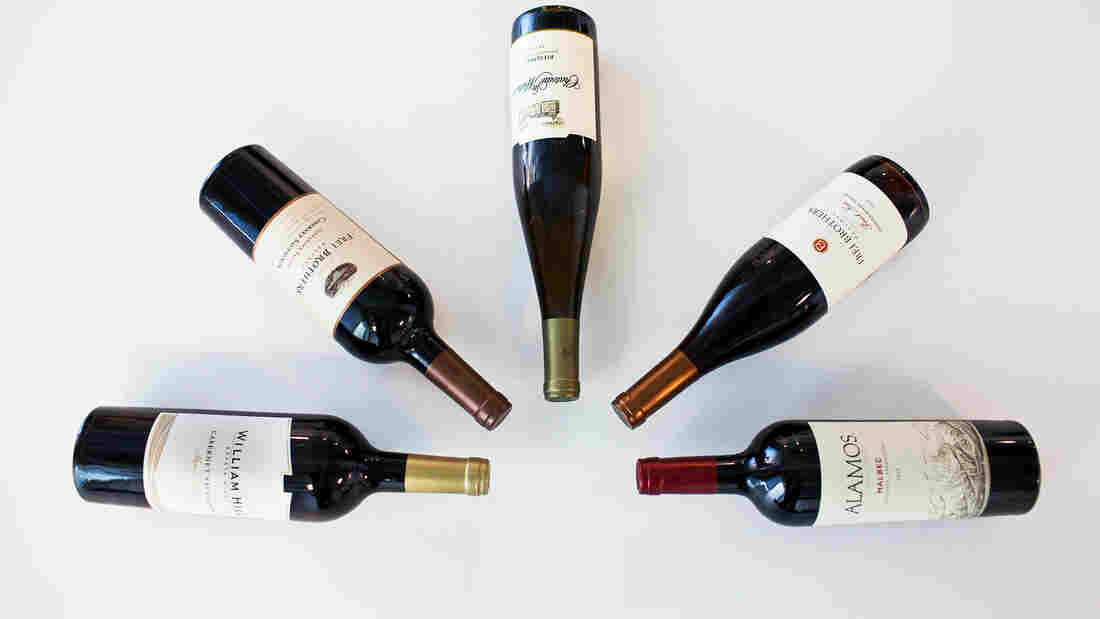 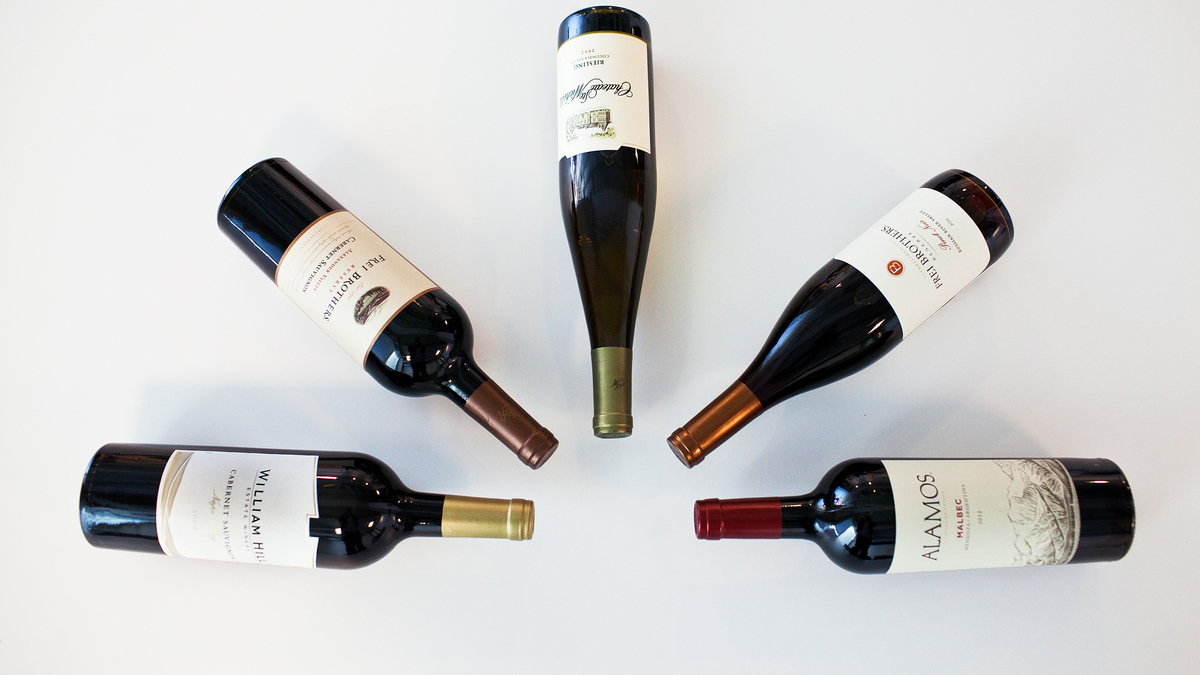 Having trouble picking the perfect wine?

A few months ago, we told you all about the bologna advice swirling around in the wine-tasting world. And then we offered you a few tips to quickly master the art. (Yes, it is highfalutin, but there is some real science behind it.)

Now we've decided to do the same with wine selection.

Turns out, picking out a great bottle at Safeway, or even just a glass while out for a nice meal, isn't as hard as some wine connoisseurs might make you think.

Just ask Madeline Puckette, who runs the website Wine Folly. She's a graphic designer and certified sommelier — that person in fancy restaurants who helps you decide between a California cab or an Oregon pinot. She has combined the two skills to create an infographic that boils down wine selection to a flowchart. (Here's a full version of the graphic for you to explore.)

The chart bases its recommendations on essential questions like: 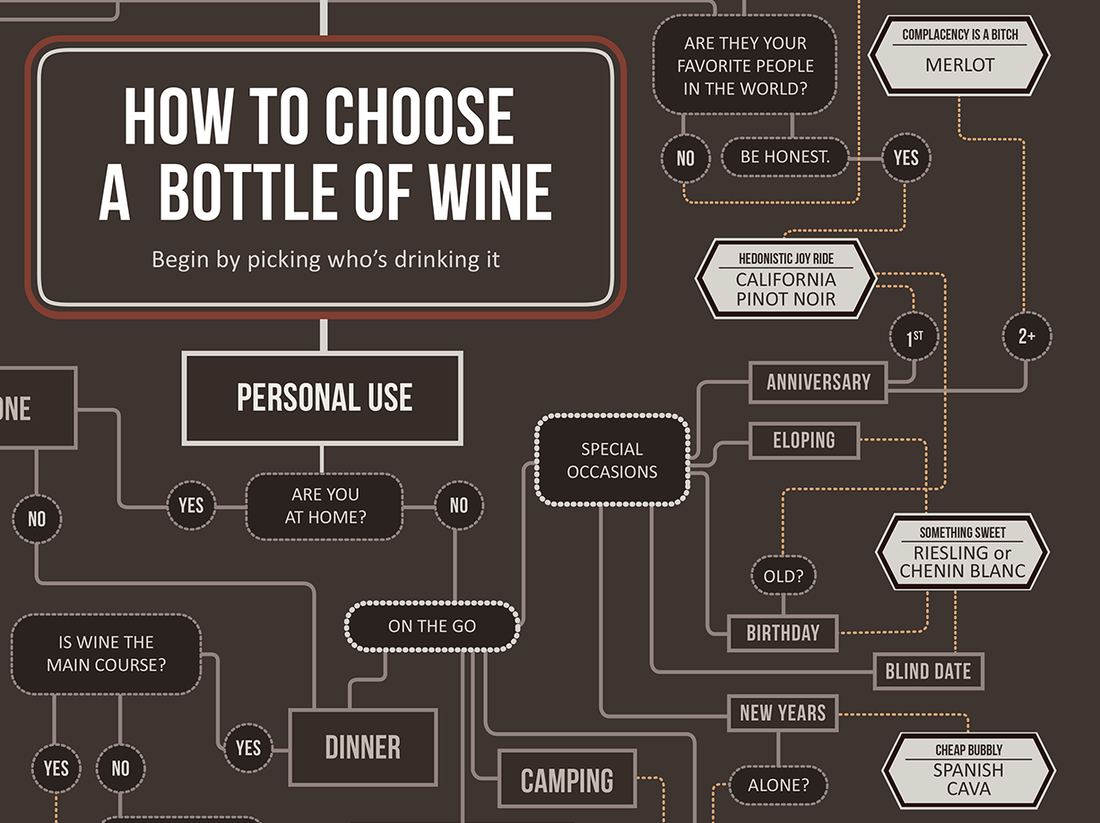 Wine Folly's cheeky flowchart also has some useful bits of wisdom: For blind dates and birthdays, try a sweet variety, such as a riesling. But for occasions that call for cheap bubbly, pick up a Spanish cava. Courtesy of Wine Folly hide caption 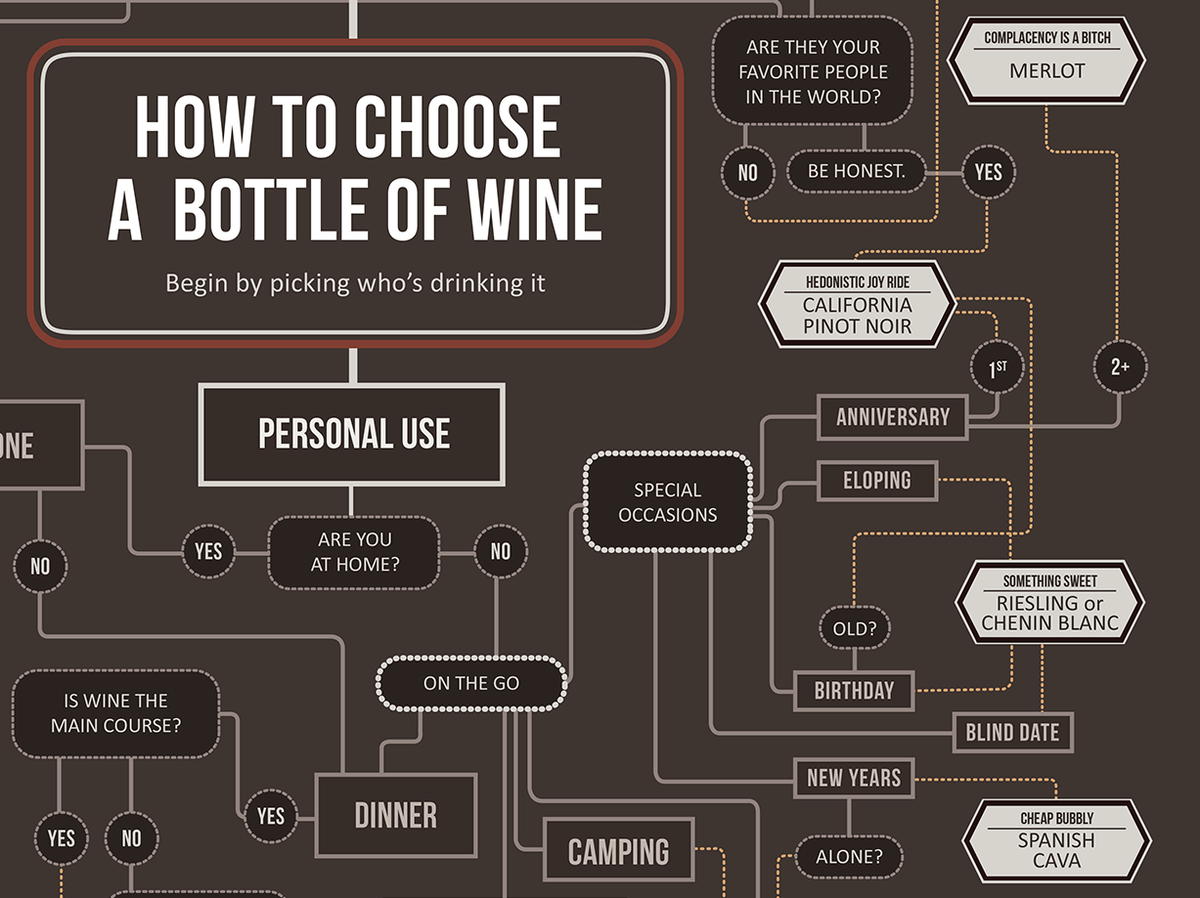 Wine Folly's cheeky flowchart also has some useful bits of wisdom: For blind dates and birthdays, try a sweet variety, such as a riesling. But for occasions that call for cheap bubbly, pick up a Spanish cava.

Yes, the infographic is a bit tongue-in-cheek. For instance, Puckette suggests a bottle of merlot for your second anniversary because "complacency is a b*tch," while anniversary numero uno, on the other hand, earns a "hedonistic joyride" of a California pinot noir.

But between the wine jokes and cheeky bits of wisdom there is solid buying advice for newbies. Here are four rules of thumb that will take you far when selecting wines:

1. If you can't pronounce the words on the wine list, ask for the "Coat Do Roan:" This rule comes straight off of Puckette's flowchart, and we love it.

Cotes du Rhone (pronounced Coat Do Roan — no "s") is a red wine from southern France made with a cornucopia of grape varieties (the Frenchies name their wines by region, not by the type of grape, as Americans and Aussies do).

French wines can be uber expensive in the U.S. But Cotes du Rhone gives you the biggest bang for the buck.

"The best Cotes du Rhone are only about $15. It's the best taste for the dollar," Puckette tells The Salt. "On the other hand, if you want to enjoy the best Burgundy, you're going have to pay about $50 to $80."

Plus, the Rhone region pumps out a boatload of Cotes du Rhone each year. So chances are, you'll run across it at French restaurants or on the grocery shelf.

2. When your only choices are cheap ones, take a cab: Making wine with the grape variety cabernet sauvignon is easy peasy. The cab fruit thrives even under less-than-ideal conditions. So it's hard for winemakers to mess up a bottle of cabernet sauvignon, even when they're working with cheap grapes.

That means cab sauv (as wine lovers sometimes say) is the go-to wine when you are penny-pinching or your only choices are low rent. Even at bargain-basement prices, these wines can be drinkable.

So when the vino is served in plastic cups (hello, transatlantic flight) or from 1.5-liter bottles (hello, intermission at the local theater), your best bet is the cabernet sauvignon.

For those on a budget who prefer a white, go with chardonnay. It may have some fake vanilla or oak flavors added, but at least the wine will taste like something.

3. For fancy noirs, think pinot: Oh, pinot noir, you're so picky! The pinot noir grape is the opposite of cabernet sauvignon: It's hard to grow and do right.

"Thin-skinned and temperamental," Paul Giamatti's character says about the grape in the 2004 movie Sideways — a film that, among other things, can be read as one man's singular obsession with pinot. "Only somebody that really takes the time to understand pinot's potential can then coax it into its fullest potential ... then ... its flavors are the most haunting and brilliant, thrilling."

And Puckette agrees. She recommends buying this "hedonisic joy ride" for "wine lovers" and "your favorite people in the world." Or to help you get through a dreaded birthday.

But all hedonism comes at a cost. To enjoy the pinot joy ride, you'll have to be willing to fork over about $20 bucks for a bottle or $10 for a glass at a restaurant. Cheap pinots just aren't very good or worthy of your taste buds.

4. For cooking, remember the sauvignon blanc: Puckette performed some experiments with a chef cooking with different types of white wines. Her conclusion? Sauvignon blanc was the best for use in white sauces, because it adds a jolt of acidity, like a lemon or lime. And decent ones are readily available for about $10.

"Sauvignon blanc is a wonderful wine to cook with," she says. "Why add lemon to a sauce when you can add a wine that's got more acidity? Plus, sauvignon blanc adds a herbaceous character, adds a little spice to the sauce."

When a recipe calls for reds, try a Chianti or sangiovese.