Accessibility links
The Full-Fat Paradox: Whole Milk May Keep Us Lean : The Salt Two recent studies add to the growing evidence that consuming dairy fat may actually fend off weight gain. Experts say it may be time to revisit the assumption that when it comes to dairy, fat-free is always best. 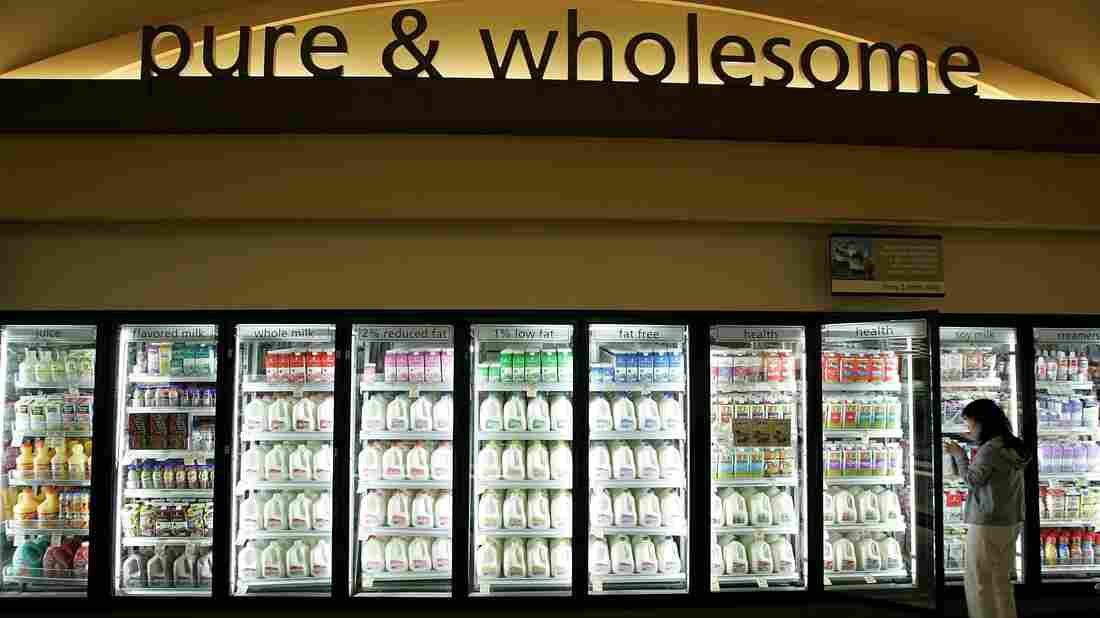 A customer shops for milk at a Safeway in Livermore, Calif. Although it may seem counterintuitive, there's growing evidence that full-fat dairy is linked to reduced body weight. Justin Sullivan/Getty Images hide caption 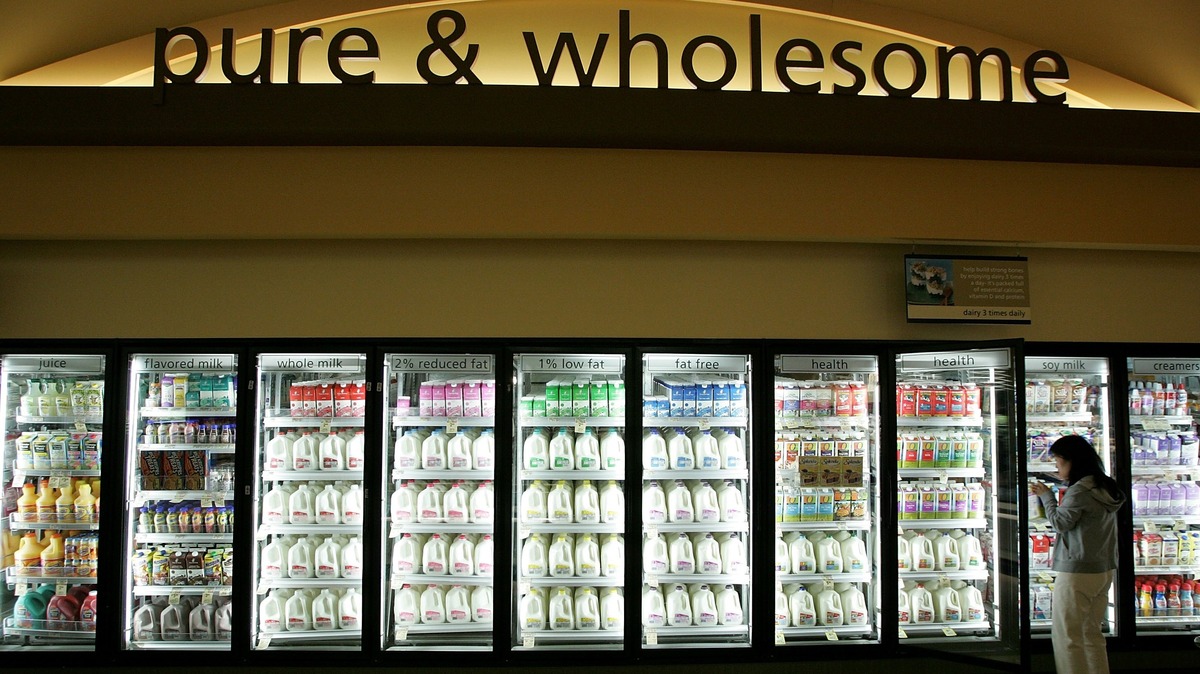 A customer shops for milk at a Safeway in Livermore, Calif. Although it may seem counterintuitive, there's growing evidence that full-fat dairy is linked to reduced body weight.

I have to admit, I melt at the creaminess of full-fat yogurt.

It's an indulgence that we're told to resist. And I try to abide. (Stealing a bite of my daughter's YoBaby doesn't count, does it?)

The reason we're told to limit dairy fat seems pretty straightforward. The extra calories packed into the fat are bad for our waistlines — that's the assumption.

But what if dairy fat isn't the dietary demon we've been led to believe it is? New research suggests we may want to look anew.

Consider the findings of two recent studies that conclude the consumption of whole-fat dairy is linked to reduced body fat.

In one paper, published by Swedish researchers in the Scandinavian Journal of Primary Health Care, middle-aged men who consumed high-fat milk, butter and cream were significantly less likely to become obese over a period of 12 years compared with men who never or rarely ate high-fat dairy.

Yep, that's right. The butter and whole-milk eaters did better at keeping the pounds off.

"I would say it's counterintuitive," says Greg Miller, executive vice president of the National Dairy Council.

The second study, published in the European Journal of Nutrition, is a meta-analysis of 16 observational studies. There has been a hypothesis that high-fat dairy foods contribute to obesity and heart disease risk, but the reviewers concluded that the evidence does not support this hypothesis. In fact, the reviewers found that in most of the studies, high-fat dairy was associated with a lower risk of obesity.

"We continue to see more and more data coming out [finding that] consumption of whole-milk dairy products is associated with reduced body fat," Miller says.

It's not clear what might explain this phenomenon. Lots of folks point to the satiety factor. The higher levels of fat in whole milk products may make us feel fuller, faster. And as a result, the thinking goes, we may end up eating less.

Or the explanation could be more complex. "There may be bioactive substances in the milk fat that may be altering our metabolism in a way that helps us utilize the fat and burn it for energy, rather than storing it in our bodies," Miller says.

Whatever the mechanism, this association between higher dairy fat and lower body weight appears to hold up in children, too.

As we reported last year, a study of children published in the Archives Of Diseases in Childhood, a sister publication of the British Medical Journal, concluded that low-fat milk was associated with more weight gain over time.

"It really surprised us," study author Mark DeBoer, a pediatrician at the University of Virginia, told us.

So, where does this leave us, the rule-followers, who have complied with the skim-milk-is-best edict?

Well, opinions differ. The recommendations that led to the fat-free dairy boom were, in part, born out of concerns about cholesterol.

Whole-milk dairy products are relatively high in saturated fat. And eating too much saturated fat can increase the risk of heart disease. So many experts would agree that adults with high cholesterol should continue to limit dairy fat.

But it's also becoming clear that there are benefits to full-fat dairy, too, at least for some consumers.

It's unclear whether more people are opting for whole milk products. Though nonfat and low-fat still dominate dairy sales, the organic sector is experiencing an uptick in whole-fat sales.

"We definitely in the last few years are seeing a trend toward the whole-fat products," George Siemon, CEO of farmer-owned Organic Valley, told us. His company's sales of whole-fat milk are up 10 percent, he says. And sales of skim milk have trailed off. Also, there's been a boom in butter sales.

So, stay tuned. Though it's a sounds-too-good-to-be-true finding, researchers are continuing to investigate how dairy fat may help people control their weight.