Accessibility links
Why Some Olympians Load Up On Salad Instead Of Pasta : The Salt From cross-country skiers to ski jumpers, elite athletes can have very different fueling priorities. Endurance winter athletes may need up to 5,000 calories on competition day, while ski jumpers hoping to stay light and lithe might limit themselves to 1,800 calories or less a day. 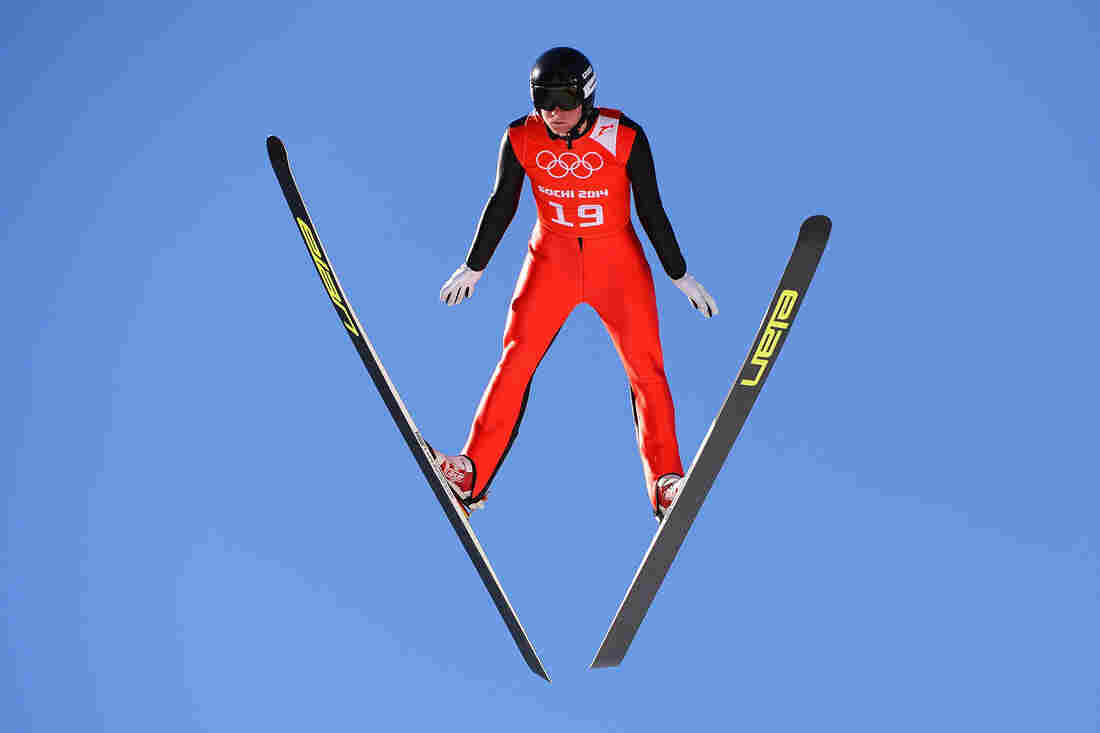 Peter Frenette of the United States jumps during training for the Men's Normal Hill Individual ahead of the start of the Sochi Games. Lars Baron/Getty Images hide caption 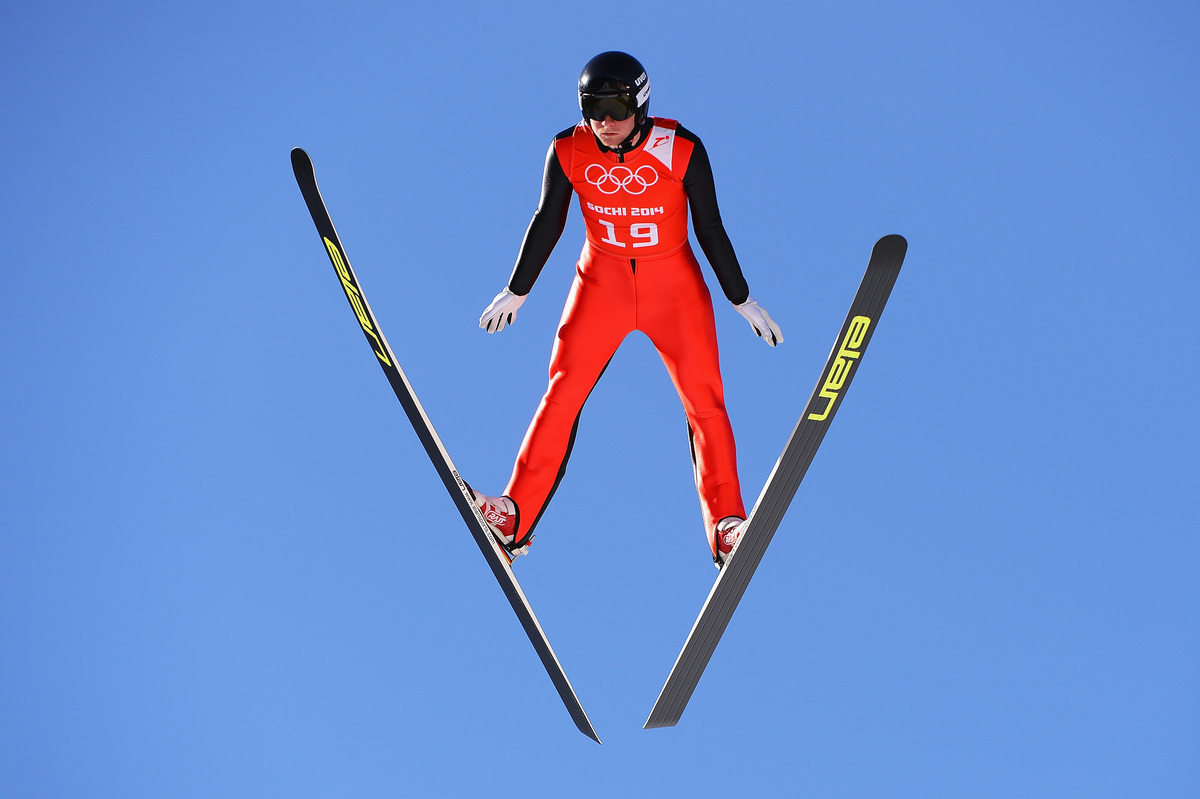 Peter Frenette of the United States jumps during training for the Men's Normal Hill Individual ahead of the start of the Sochi Games.

When we imagine Olympic athletes at the table before the most important competition of their lives, we might picture a huge plate of pasta, with Gatorade to wash it down and a well-deserved ice cream sundae for dessert.

Turns out, they might be preparing with a salad, a glass of beet juice and some almonds.

As we reported back in 2012 during the London Games, athletes actually deploy a pretty wide range of fueling strategies to coax peak performance from their bodies. Those strategies depend a lot on the demands of the sport — whether it's endurance or aesthetic — and maybe even a desired body shape (think speedskating).

Before Marathoners Had Energy Bars ...

For the Summer Games, there was Michael Phelps' legendary 12,000-calorie binge. On the other end of the spectrum were the wrestlers consuming just 1,200 calories the day of competition to make weight.

Winter athletes are just as likely to have specific calorie needs and goals, Nanna Meyer, senior sport dietitian for the U.S. Olympic Committee and a professor of sports nutrition at the University of Colorado, Colorado Springs, tells The Salt. In Sochi, Meyer is cooking for and advising the speedskaters. She's also blogging enthusiastically from such venues as the Olympic Dining Hall and the local grocery store. (According to Meyer, the food in Sochi is excellent — better even than in Turin, Italy.)

Meyer, who published a paper on sports nutrition for winter Olympians in 2011 in the Journal of Sports Science, says choosing the right fuel is most challenging for cross-country skiers competing in long events. They're advised to load up on carbs before competition (three to five hours beforehand is the recommended time frame), but they sometimes don't manage to get enough, and their performance suffers as the glycogen in their muscles is depleted. Meanwhile, some ski jumpers are aiming to reduce their body weight and don't need nearly so many carbs. (The lighter the jumper, the longer the jump, the thinking goes.)

Meyer helped us put together the table below to show just how much energy winter Olympians aim to take in, by sport. She cautions that many of these numbers are rough estimates, and even within sports, male and female athletes may eat very different amounts.

According to Meyer's research, more elite winter athletes have been trying to maintain lean and muscular physiques, and even intentionally low body weight, in recent years. But this has also heightened the risk of eating disorders, which she says have been documented among figure skaters, freestyle aerial skiers, cross-country skiers, biathletes, ski jumpers and Nordic combined athletes.

The sports dietitian's job is to help bring some order to athletes' diets, whatever their goals. "We help athletes build their plates, steer them away from McDonald's, and keep them excited with interesting new things in snacks and familiar things shortly before, during and after exercise (which would be their training or competitions)," writes Meyer on her blog. 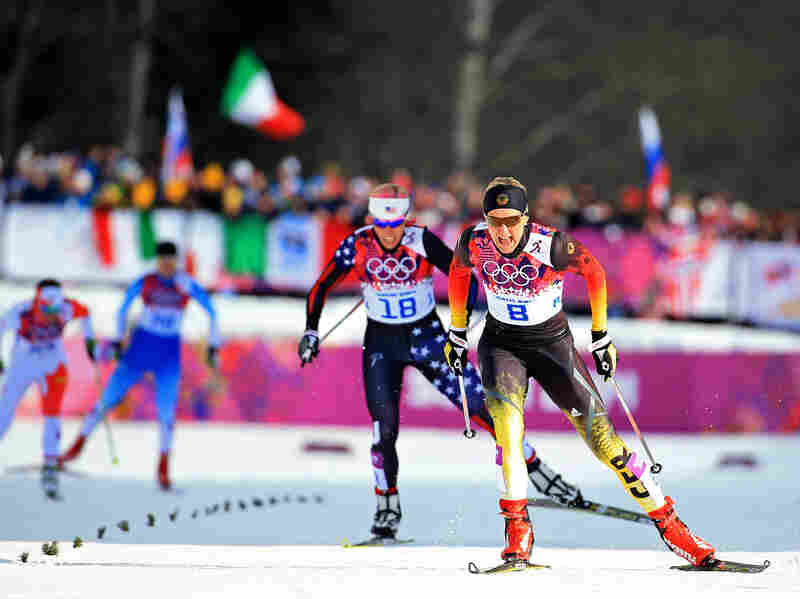 Kikkan Randall of the United States (left) and Denise Herrmann of Germany compete in the finals of the Ladies' Sprint Free during the Winter Olympics in Sochi, Russia. Richard Heathcote/Getty Images hide caption

That sometimes means juicing fruits and vegetables, which Meyer was doing last week, or having easy-to-eat processed foods at the ready. "Specific event needs may be energy bars (either with higher carbohydrate or protein content), gels with concentrated amounts of carbohydrate (some with caffeine), Shot Bloks (just like gummy bears with a sport nutrition twist), protein bars for recovery, powders for during and after exercise and so forth," she says.

But don't bet on these regimens sticking around for long. The field of sports nutrition is evolving fast and has come a long way since Meyer's days as a member of the Swiss alpine ski team about 35 years ago.

"When I was an athlete, all we had was bars and a sport drink. ... Nowadays, we have anything from gooey, slobbery, sweet, viscous liquid or gummy bears with a touch of salt. Sport nutrition has taken its twists and turns," she blogs from Sochi.

For more NPR coverage from the Sochi games, check out our sister blog, The Edge.