Accessibility links
What Honest Abe's Appetite Tells Us About His Life : The Salt Abraham Lincoln is known as one of America's greatest presidents. Turns out, he was also a cook who used to join his wife in the kitchen after work. In her new culinary biography of Lincoln, a food historian walks us through his life with stories — and recipes — of what he ate, cooked and served.

What Honest Abe's Appetite Tells Us About His Life

What Honest Abe's Appetite Tells Us About His Life 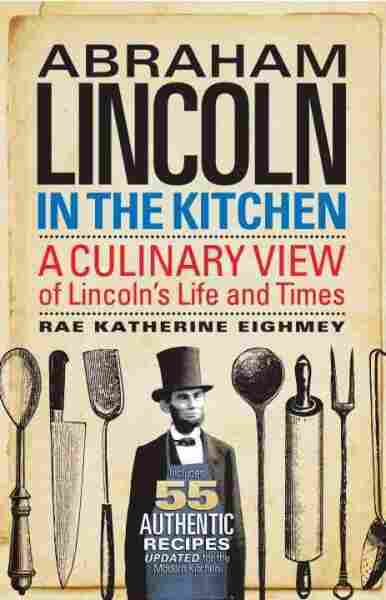 Abraham Lincoln in the Kitchen

A Culinary View of Lincoln's Life and Times

Most people know Abraham Lincoln for his achievements as president. He issued the Emancipation Proclamation and held the nation together through the trauma of the Civil War. His Gettysburg Address is one of the best known in American history.

But what you might not know is that Lincoln cooked.

From his childhood to his days in the White House, food played an integral part in shaping Lincoln's life, food historian Rae Katherine Eighmey tells Tell Me More's Michel Martin.

Eighmey's new book, Abraham Lincoln in the Kitchen: A Culinary View of Lincoln's Life and Times, looks at our 16th president's life through the extraordinary stories of what he ate, cooked and served, along with recipes modified for the modern kitchen.

"By looking at his life through the foods that he ate or may have eaten, or was exposed to, you're able to build a picture of him as a human man and as a family man," she says.

What piqued Eighmey's interest was a simple tale of Lincoln putting on a blue apron after a day's work at his law office and helping his wife cook dinner. From there, Eighmey investigated stories of him cooking for the family after his mother died, cooking for his brothers as they journeyed down to New Orleans on a flatboat and of how the famous Mary Todd Lincoln white almond cake came to be. (Note: Modern recipes for the dessert are far easier than the original.)

Lincoln's cooking skills, says Eighmey, were part and parcel of the survival skills he needed during his hardscrabble upbringing. "Like any pioneering child, you live in a one-room log cabin, you are essentially raised in the kitchen. When Lincoln's mother died [when he was 9], he and his sister had to take over taking care of themselves and their father."

During one of their famous debates — which helped catapult Lincoln into the national spotlight and eventually, the presidency — Lincoln grew tired of the constant false praises from Douglas. So, to make him stop, Lincoln told a story from his childhood.

He talked about how he once shared gingerbread cookies his mother made with a neighboring boy, who then told him that "there's nobody who likes gingerbread as much as I do, and nobody who gets as little as I do."

Presidential Foods And What They Say About Our Leaders

"So Lincoln was contrasting that to how he doesn't get much flattery, and here Douglas was heaping it on him, you know, falsely," Eighmey says.

But the story doesn't just end there. In a way, Eighmey is also a detective, analyzing the stories to unravel recipes that Lincoln and his family likely used back in the 1800s.

For the gingerbread story, Eighmey says, the clues were Lincoln's description of the cookies: that they were made from sorghum flour and ginger, and that he could stuff them in his pocket, which meant that the cookies were sturdy in texture. Using that as the starting point, she sifted through old cookbooks to find the closest recipe that fit those elements.

After Lincoln died, Eighmey says, many mourning Americans began to "savor his life through food," giving rise to recipes in his honor such as "the Lincoln cake." There are several different cake recipes with this name from that era, she says. (Her book includes one for a large, lightly fruited cake.)

So what do you eat if you want to honor Lincoln's life this Presidents Day? Well, Eighmey suggest apples, which were his favorite food, and corn cakes.

"He was said to have eaten those as fast as two women could prepare them," she says.

Read an excerpt of Abraham Lincoln in the Kitchen