Accessibility links
How Tracing The Oil In Your Pop-Tarts May Help Save Rain Forests : The Salt A Kellogg shareholder helped nudge the company to buy palm oil that's fully traceable to its source. The hope is that more transparency in the industry will prevent environmental and labor abuses. 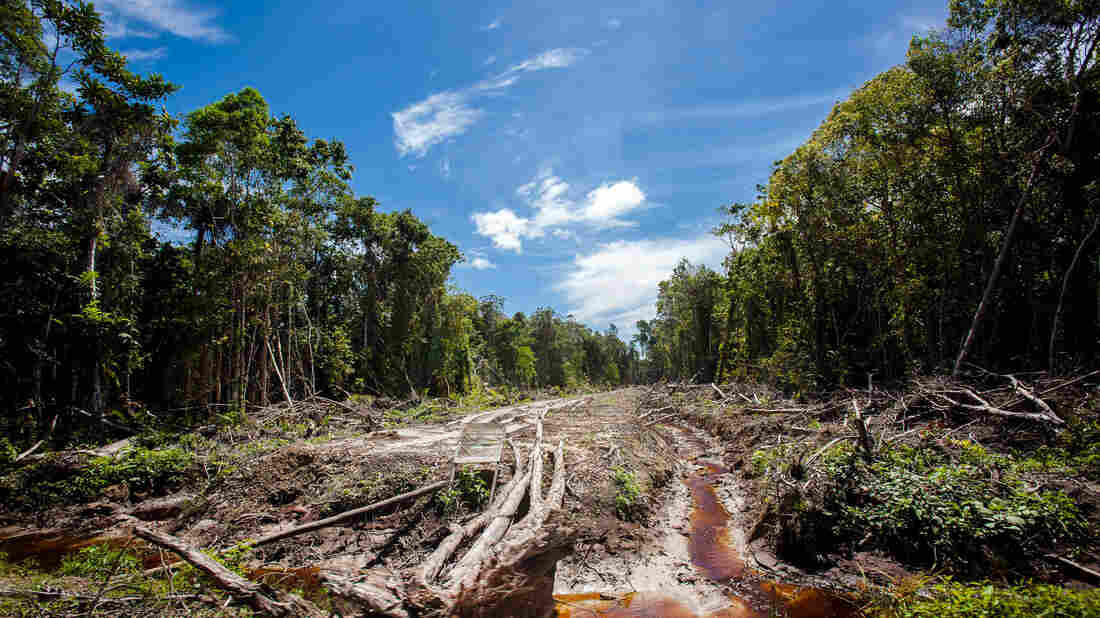 An access road is constructed in a peatland forest being cleared for a palm oil plantation on Indonesia's Sumatra island in 2013. Chaideer Mahyuddin/AFP/Getty Images hide caption 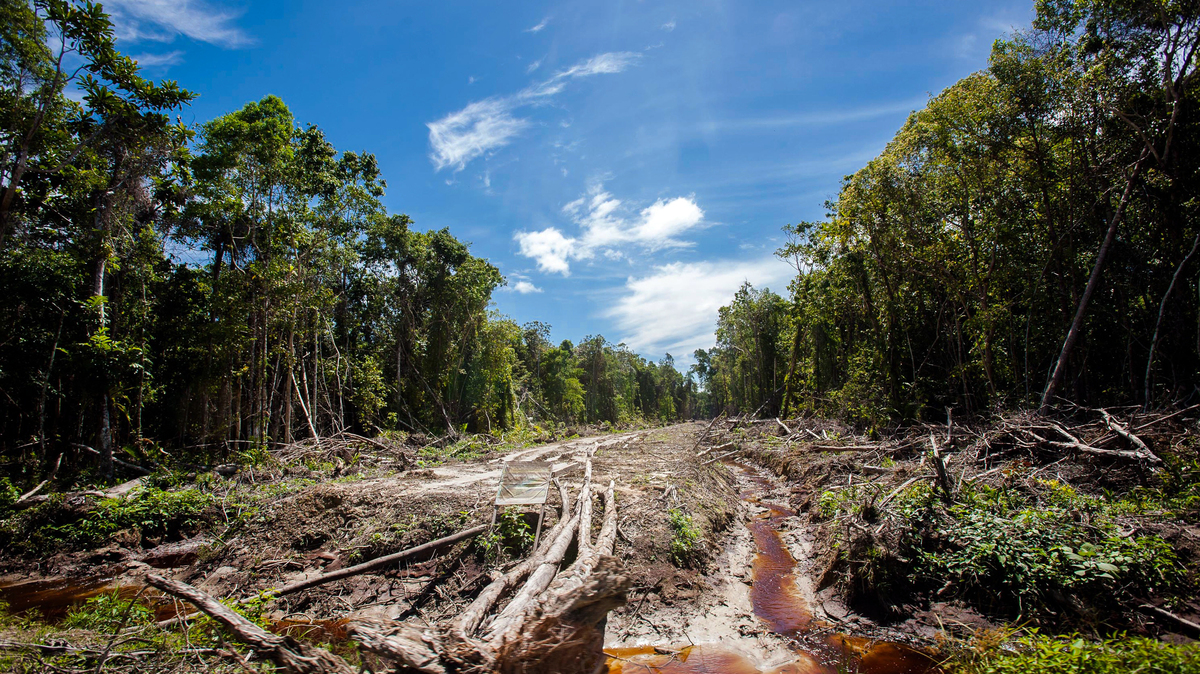 An access road is constructed in a peatland forest being cleared for a palm oil plantation on Indonesia's Sumatra island in 2013.

If you think a small shareholder can't get the attention of the multibillion-dollar palm oil industry, think again.

Lucia von Reusner lives half a world away from the palm oil plantations in Southeast Asia that have become notorious for environmental, labor and human rights abuses.

So, how did she nudge for change? She couldn't tell palm oil plantations in Indonesia to clean up their act. But, as a Kellogg shareholder, she figured out how to put pressure on the company to use its leverage to push for change.

Palm oil, of course, is the fat that lubricates so many of our packaged snacks today, from Pop-Tarts and Eggo waffles to soaps and other personal products. And global demand for palm oil has grown quickly.

The clear-cutting of precious forests in countries like Indonesia and Malaysia to grow the oil palm trees has been well-documented. More recently, an investigation by BloombergBusinessweek into human rights abuses on Indonesian palm oil plantations and an Accenture analysis that described the use of child labor have raised more awareness about other unsavory realities in the industry.

Von Reusner, who works as a shareholder advocate for Green Century Capital Management, a mutual fund company that attracts green-minded investors, saw an opportunity to do something about it.

She got on an earnings conference call in August 2013 with the CEO of Kellogg and asked this question:

"As a company publicly committed to sustainability, how will Kellogg ensure that the Kellogg brand is not associated with illegal deforestation?"

One of Kellogg's main suppliers of palm oil, Wilmar, has, in the past, been ranked among least sustainable companies in the world by Newsweek's green rankings. 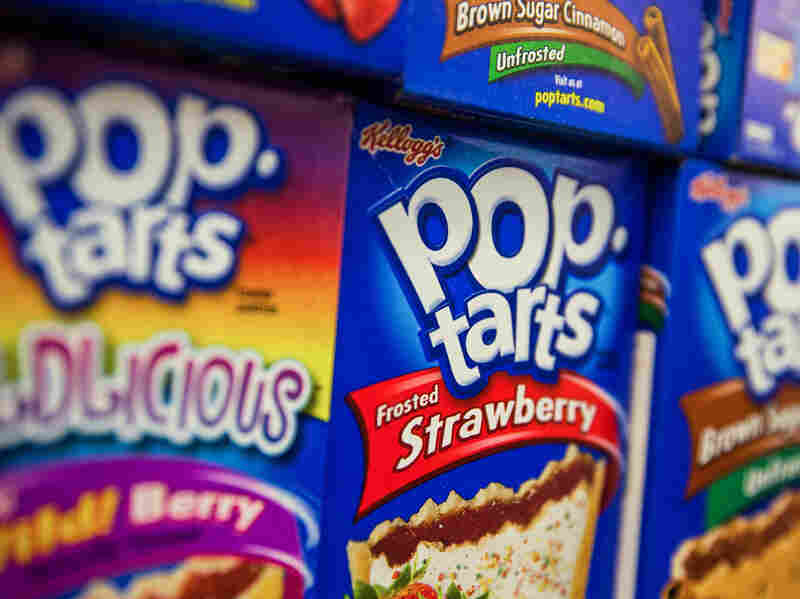 Kellogg, maker of Pop-Tarts, announced Feb. 14 that it will buy palm oil — an ingredient in Pop-Tarts — only from companies that don't destroy rain forests where palm trees are grown. Andrew Burton/Getty Images hide caption 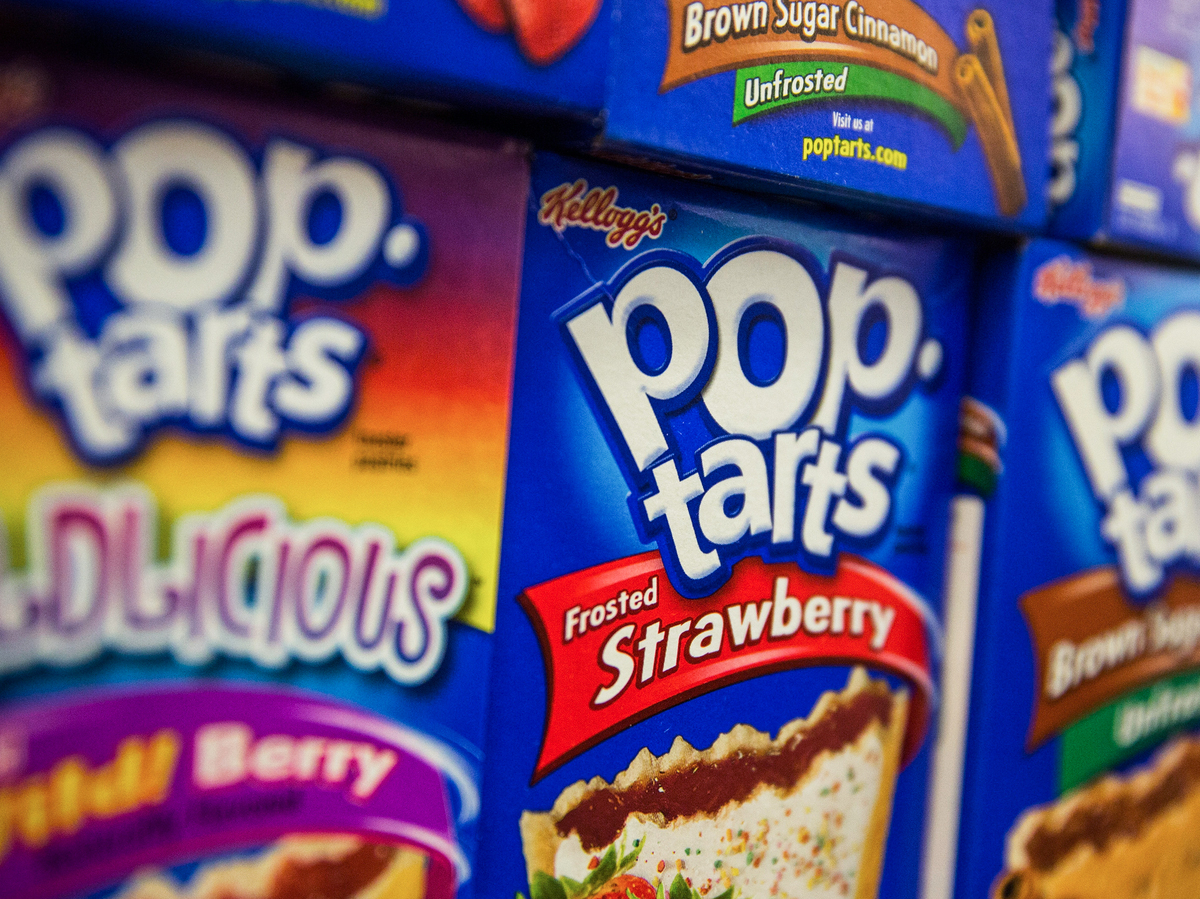 Kellogg, maker of Pop-Tarts, announced Feb. 14 that it will buy palm oil — an ingredient in Pop-Tarts — only from companies that don't destroy rain forests where palm trees are grown.

Von Reusner's questioning garnered lots of attention and was picked up by Bloomberg News. And she filed a shareholder proposal aimed at getting Kellogg to make changes.

Now, keep in mind her mutual fund is a tiny investor in Kellogg. (Kellogg has $21 billion in publicly traded shares. Green Century owns about $180,000 worth.) But von Reusner didn't see this as an obstacle.

'"As a shareholder in Kellogg, Green Century has a direct voice that management was obligated to respond to," von Reusner tells us.

The chief sustainability officer at Kellogg, Diane Holdorf, says that even before this shareholder petition was filed, the company was already at work drafting a new policy on palm oil.

And this month, Kellogg released a new global commitment to work with palm oil suppliers to buy oil that is fully traceable to its source.

In a press release, the company wrote, "Kellogg is working through its supply chain — from suppliers to processors to growers — to ensure that palm oil it uses is sourced from plantations that uphold the company's commitment to protect forests and peat lands, as well as human and community rights. "

Kellogg had already made substantial efforts to engage with its suppliers to change how it sources palm oil. And the company has been procuring oil produced to standards set by the Roundtable on Sustainable Palm Oil.

But it seems that von Reusner's actions may have been a nudge to the industry to go yet a step further. And there has been a chorus of voices joining her. For instance, multiple groups had been leaning on Kellogg to end its partnerships with supplier Wilmar.

Then, in December of last year, Wilmar announced a No Deforestation, No Exploitation policy, which advocates like von Reusner and Forest Heroes consider a big victory.

So if Kellogg and Wilmar are stepping up to make this new commitment, who's next? As we've reported, Dunkin' Donuts made changes after New York State Comptroller Thomas DiNapoli, who oversees the state's public pension fund, made a stink.

The folks at the Rainforest Action Network have a campaign targeting 20 snack-food-makers to make changes in the way they source palm oil.

Now, lots of advocates say the commitment made by Kellogg is encouraging.

"It's a very hopeful sign," says Laurel Sutherlin of the Rainforest Action Network. "But it's too early to say, 'Problem solved.' "

Sutherlin says it's important to keep pressuring companies to act on the commitments they're making.