Accessibility links
Cholent: The Original Slow-Cooked Dish : The Salt A stewed dish cooked very low and slow, cholent has roots in the Jewish Sabbath. This ancient stew directly inspired the Crock-Pot – and maybe the French cassoulet and Boston baked beans as well. 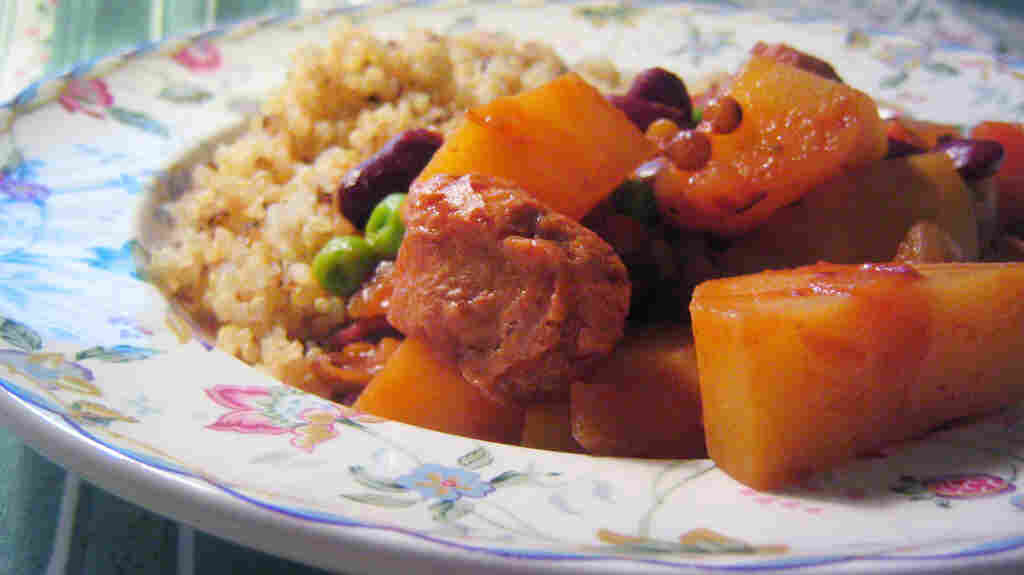 While traditional cholents feature meat and beans cooked for a whole day, some modern versions, like this one, use vegetable protein and a quick braise. rusvaplauke/Flickr hide caption 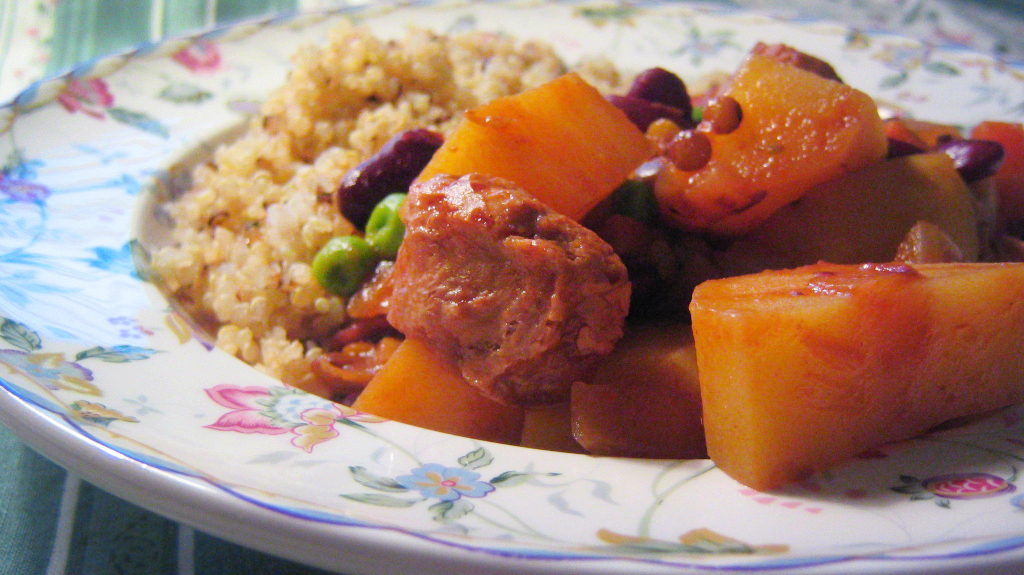 While traditional cholents feature meat and beans cooked for a whole day, some modern versions, like this one, use vegetable protein and a quick braise.

This chilly winter, many of us have warmed ourselves — and our kitchens — with long-cooked meals. Roasts, beans, and stews have been in heavy rotation. But there's a dish called cholent that isn't just cooked for a few hours — it's cooked for a full day.

Cholent is rooted in the Jewish Sabbath, which traditionally prohibits work from sundown Friday to sundown Saturday. Under some interpretations, this includes prohibitions on even turning on the oven or stove. So for those who want to have a hot meal (and many feel a religious imperative to do so), the solution is to set up a stewed dish cooking low and slow on Friday, long before the sunset. Over a day of slow cooking, flavors infuse, beans soften, and tough cuts of meat become tender. By the time synagogue services are complete on Saturday afternoon, the rich, flavorful stew is ready to ladle out.

Food historian Gil Marks has traced cholent's journey over the past thousand years, as it moved with Jewish communities through different countries.

"The dish comes out of the Middle East, and then it spreads to North Africa, and by the 9th century, it's already found in Spain," Marks says.

The dish eventually made its way to Eastern Europe — the term cholent refers to this version, which is most common in America. Eastern European (Ashkenazi) cholent usually features beans, barley, and some sort of meat. The seasoning will vary. Marks points to Hungarian recipes with paprika, peppered Lithuanian variations, and Polish cholents flavored with little more than onions and garlic.

The surviving versions from the Middle East through North African vary as well — from Iraqi tbit featuring a whole chicken stewed overnight with rice, to turmeric- and cumin-scented Moroccan stews with long-cooked eggs that become caramel-colored.

And Marks maintains that cholent didn't just change shape in different countries — it gave rise to new dishes. Cassoulet is a classic Southern French dish, but Marks thinks it has its roots in cholent.

"We do find a number of French sources from the Catholic church forbidding Christians from eating a long-cooked bean dish because it's Jewish," he says.

And Boston baked beans may seem like a dish born in America, but Marks maintains that it came from a version of cholent made by Sephardic Jews – those of Spanish, Portuguese, Middle Eastern and North African descent.

Marks says the Puritans learned this version of the dish – called shachna -- from Jews they met during their time in Holland.

Unfortunately, these cholent theories on Boston baked beans and cassoulet can be difficult to really prove. But cholent has changed modern American cooking in ways that are undeniable.

Inventor Irving Naxon came up with over 200 patents, for everything from washing machines to sending data over telephone wires. But one of his most popular ideas was inspired by his mother's stories of making cholent in Lithuania.

"She would walk it over to the village bakery, where, as the ovens were turned off for the Sabbath, the pot of cholent would be put in the oven," explains Naxon's daughter, Lenore. "And that slow residual heat over the course of the 24 hours would be enough to cook the cholent."

After the Saturday religious services, the kids would pick up their pots for a warm Sabbath meal.

"So my father heard that story, and thought, hmm, well how can I take the crock and electrify it with some slow, even heat?" Lenore Naxon remembers.

The resulting invention was first called the Naxon Beanery — but you might know it better as the Crock-Pot. It's an idea that went from the Middle East, to a little shtetl in Lithuania, to millions of American homes. And in some of them, it's still being used to make cholent.

This recipe comes from Devora Wilhelm of Portland's Maimonides Jewish Day School — it originally came from her mother, who got it from a Hungarian friend. Wilhelm stresses that you should feel free to tailor your cholent to your taste — use waxy or starchy potatoes, chickpeas or kidney or pinto beans. As Wilhelm encourages, "it doesn't matter, it's cholent — do what you want."

6 onions, peeled and sliced or diced in large pieces (they'll nearly melt by the end, so don't worry)

Heat oil in a medium heat over a large pot (or, if you have a stovetop-friendly slow cooker, you can use that). Saute the onions until soft and translucent. If you've used a separate pot, transfer to a slow cooker a this point. Add the beans, barley, and potatoes, and cover with water up to a few inches from the top of the cooker. Add the seasonings, then taste the water and adjust as needed to have a combination of flavors to your liking. Add the chicken, and add additional water if needed so that it's between 1-2 inches from the top of the crock.

Cook the cholent on high for three to five hours. Taste and adjust seasonings as needed, then turn to low and cook until the next day. Enjoy warm for lunch (although Wilhelm's children have been known to dip into it for breakfast).