Accessibility links
New Rules Would Curb How Kids Are Sold Junk Food At School : The Salt Schools have made big strides in meeting standards for healthier meals, but students are still bombarded by junk food marketing. The first lady announced guidelines Tuesday that aim to change that. 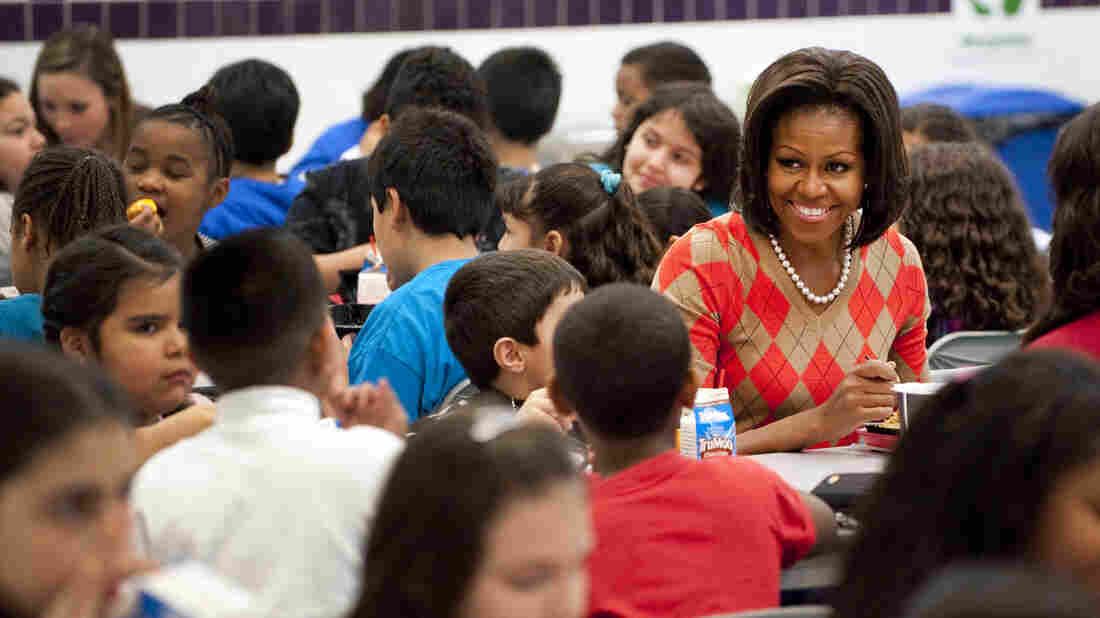 Michelle Obama eats lunch with school children at Parklawn Elementary School in Alexandria, Va., in 2012. The first lady unveiled new guidelines Tuesday aimed at cracking down on the marketing of junk food to kids during the school day. Saul Loeb/AFP/Getty Images hide caption 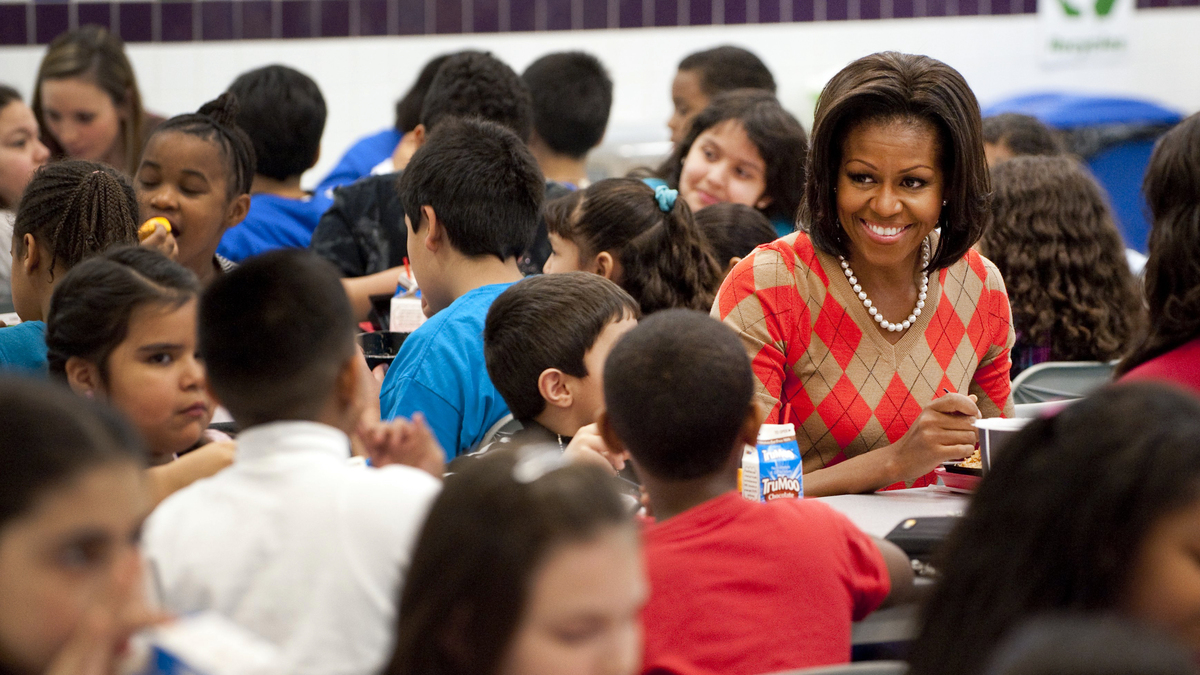 Michelle Obama eats lunch with school children at Parklawn Elementary School in Alexandria, Va., in 2012. The first lady unveiled new guidelines Tuesday aimed at cracking down on the marketing of junk food to kids during the school day.

If you want to teach kids to adopt healthier eating habits, it's probably unwise to give them coupons for fast food chains at school.

And those advertisements for sugary sodas on the gymnasium scoreboard? Seems like another mixed message schools are sending kids.

That's why the White House and U.S. Department of Agriculture proposed new school wellness guidelines Tuesday aimed at cracking down on the widespread marketing of less-than-nutritious foods to kids on campus during the school day. Even though 90 percent of school districts are now meeting the overhauled nutrition standards for school lunches, students are still being flooded with advertising for junk food in schools, according to first lady Michelle Obama.

"The idea here is simple: Our classrooms should be healthy places where kids aren't bombarded with ads for junk food," said Obama, who joined USDA Secretary Tom Vilsack to announce the guidelines. "Because when parents are working hard to teach their kids healthy habits at home, their work shouldn't be undone by unhealthy messages at school," she added in a statement.

And that messaging is everywhere: Food and beverage companies spent $149 million to market their products in schools in 2009, according to the Federal Trade Commission. Advertising for sodas and other sugary drinks accounted for more than 90 percent of this spending, followed by fast food.

Beverage companies used to sell a lot of sodas in schools. Nowadays, their vending machines are selling juice and water instead. Even so, critics note, the same companies are still selling directly to kids.

Meanwhile, nearly two-thirds of elementary-school kids receive coupons for fast food at school through programs such as Pizza Hut's Book It! Program, which uses pizza as a reading incentive, according to a study published last month in JAMA Pediatrics.

The proposed rules would limit such exposure by allowing only ads and marketing in schools for foods that meet the Smart Snacks in Schools nutrition guidelines. Those standards, which are set to go in effect in the 2014-2015 school year, stem from the 2010 Healthy Hunger-Free Kids Act. They aim to boost the healthfulness of foods sold through vending machines, snack bars and a la carte in cafeterias.

Under the stricter guidelines, vending machines branded with images of Coke or Pepsi's sugar-sweetened sodas would no longer be allowed in schools. Same goes for branding for sugary drinks and snacks on posters and cups.

The snack rules set limits for how much fat, sugar and sodium snacks can contain. But they only apply during the school day. So foods sold at after-school games, for instance, are exempt.

"Given the high rates of childhood obesity and children's poor diets, it doesn't make sense to advertise and market unhealthy food to children at all, much less in schools," Margo Wootan, nutrition policy director for the Center for Science in the Public Interest, said in a statement. "Parents know from experience, and studies show, that food marketing affects kids' food preferences, food choices and health."

Others applauded the new guidelines but worried that they didn't go far enough.

For instance, the new rules wouldn't ban charity events linked to fast food chains such as McCare nights — fundraisers in which students and their parents are encouraged to eat at their local McDonald's. The franchise then donates a portion of sales to the school.

"We'd love to see the Let's Move! campaign take on this predatory marketing to kids that happens across the board," says Sriram Madhusoodanan, a senior organizer with Corporate Accountability International, a watchdog group that has been calling on McDonald's to stop such marketing to kids.

Indeed, it's still unclear just how the guidelines, which have yet to be finalized, will be applied. In part, that's because schools will be given leeway to decide for themselves what constitutes unacceptable marketing.

And the Associated Press reports that the rules will make some exemptions for big infrastructure costs:

"That scoreboard advertising Coca-Cola, for example, wouldn't have to be immediately torn down. But the school would have to get one with a healthier message the next time it was replaced."

Also announced Tuesday: an expansion of efforts to feed hungry kids through school. Starting on July 1, more than 22,000 schools nationwide serving mostly low-income kids will be allowed to serve all students free breakfasts.

"Right now, millions of children in this country are showing up to school hungry every day," the first lady said.

As we recently reported, more than 21 million schoolchildren ate free or reduced-priced lunches last year. Under the expanded program, an additional 9 million kids will be eligible to receive the free meals, Obama says.