Accessibility links
Chickens That Lay Organic Eggs Eat Imported Food, And It's Pricey : The Salt America's farmers aren't growing enough organic corn and soybeans for our organic animals. Farmers in China, India and Argentina are filling the gap, but tight supplies have led to shortages. 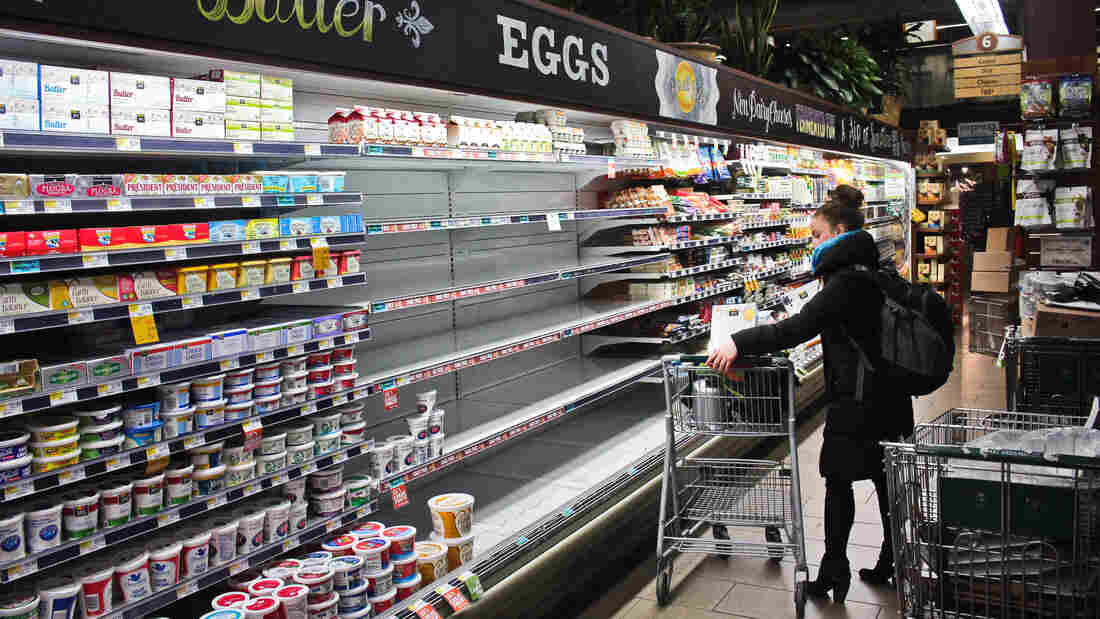 Empty shelves where eggs should be at a Whole Foods Market in Washington, D.C. The store blames increased demand for organic eggs. Dan Charles/NPR hide caption 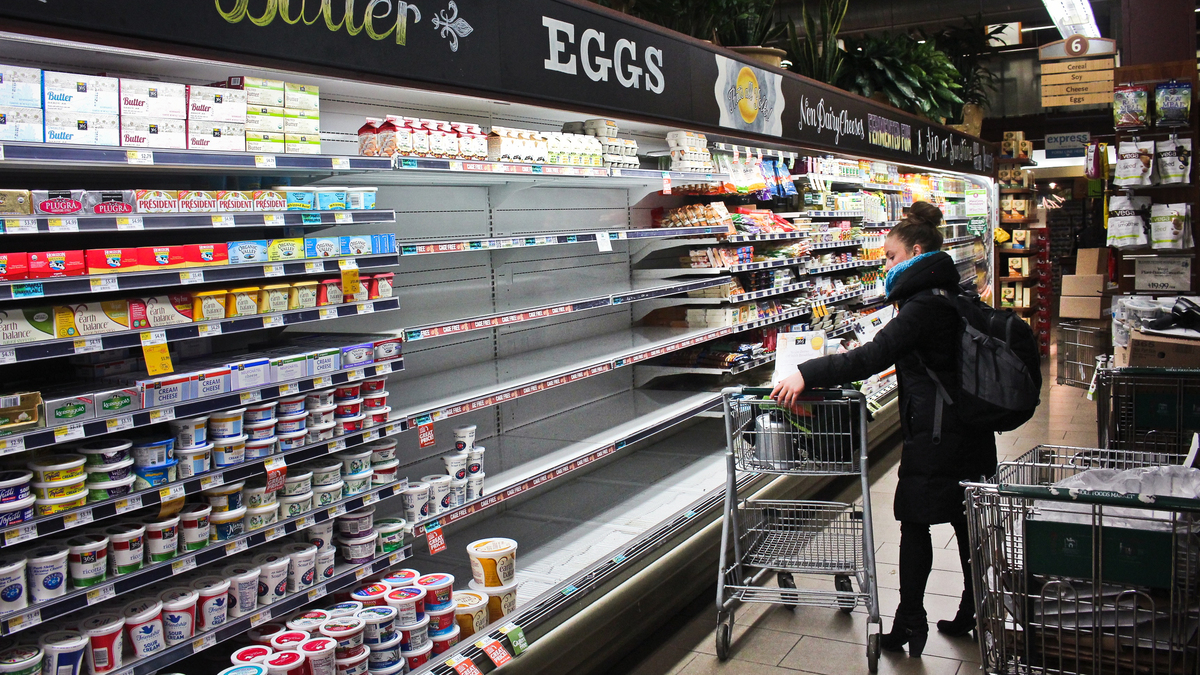 Empty shelves where eggs should be at a Whole Foods Market in Washington, D.C. The store blames increased demand for organic eggs.

The other morning, I found myself staring at something strange and unfamiliar: empty grocery shelves with the word "eggs" above them. The store, a Whole Foods Market in Washington, D.C., blamed, in another sign, the dearth on "increased demand for organic eggs."

This scene is unfolding in grocery stores across the country. But Whole Foods' sign wasn't telling the whole truth. Demand for organic eggs is indeed increasing, but production is also down.

The reason behind that shortfall highlights an increasingly acute problem in the organic industry.

Who's filling that gap? Increasingly, farmers in China, India and Argentina.

It's led to the following situation, which on the face of it seems bizarre. The U.S., a soybean superpower, ships conventional soybeans all over the world to feed animals in places like China. Meanwhile, in China, farmers are growing organic soybeans and sending them here.

The U.S. now gets more than half of its organic soybeans from abroad. The biggest suppliers are China and India.

And the stream of imports is growing. Last year, for the first time, the U.S. imported significant amounts of organic corn, too. This also went for animal feed. 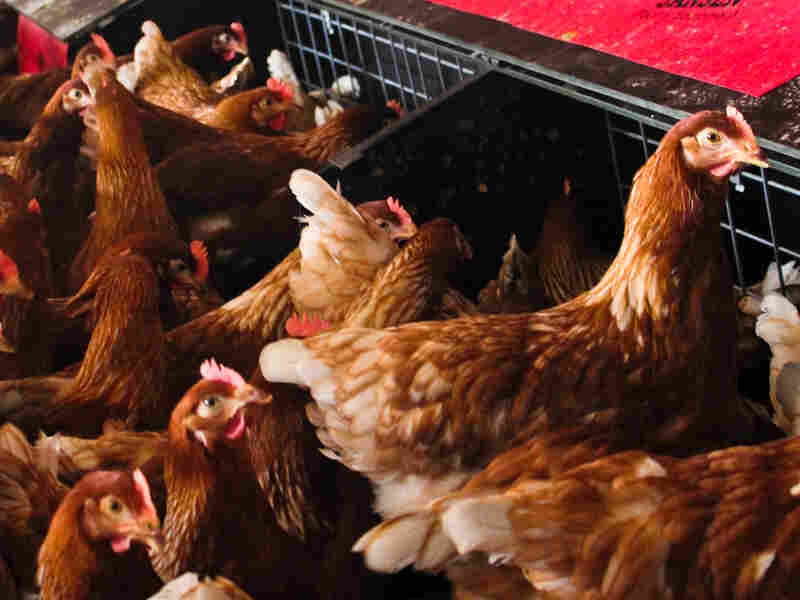 These free-range chickens are getting conventional feed. They lay eggs for Sauder's Quality Eggs in Pennsylvania. Dan Charles/NPR hide caption 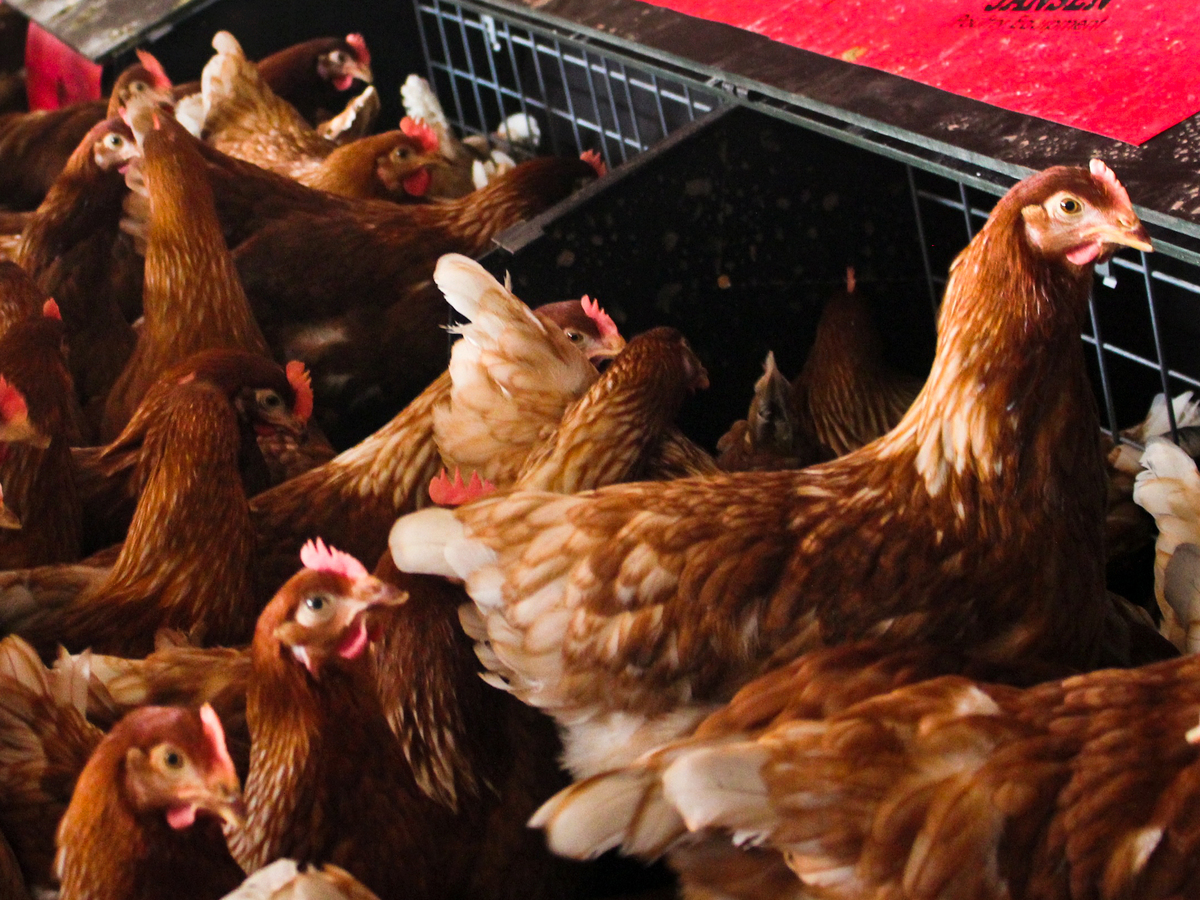 These free-range chickens are getting conventional feed. They lay eggs for Sauder's Quality Eggs in Pennsylvania.

Eggs were plentiful at the time, as they usually are during summer, so some egg producers decided to shut down their organic production for a while. They got rid of some flocks, and switched others over to conventional feed. The eggs from those flocks still could be sold as "free range" eggs, since all organic chicken houses fit the definition of "free range."

Clarkson, the grain dealer, says it's difficult to persuade most U.S. farmers to make the switch to organic production. The financial incentives are there, he says. Farmers can sell organic soybeans for twice what they'd get for conventional beans. "This should be almost a no-brainer," Clarkson says. "But it's not."

Farmers say there are a series of obstacles to growing organic soybeans. Allen Williams, a farmer near Cerro Gordo who does grow organic crops, says part of the resistance come from deeply rooted attitudes about farming. "In this area, a good farmer is one who keeps his farm very well maintained, and that means weed-free," he says. "Organic definitely isn't weed-free."

There also are practical reasons. Growing organically can mean more work, clearing weeds by hand. Also, organic soybeans may be profitable, but farmers can't grow organic soybeans on a particular field every year; they'd have too many problems with pests. The crops that they grow in other years, such as wheat, may not bring in as much money.

Farmers in China or India, on the other hand, often rely heavily on hand labor for weed control already. Their yields and profits from nonorganic crops aren't as high. So switching to organic is both less difficult and more rewarding.

Many people in the organic industry are unhappy about the situation. Judging by the reaction of Elissa Rubin, shopping for eggs at the Whole Foods, consumers may not like it either. "Wow. They're importing organic feed from those countries? That's amazing," she said. "Seems to go against the grain of helping sustainability and the environment."

Some in the organic industry don't trust the imports. Even though Chinese and Indian farms have to get the same organic certification as American farms, the skeptics think some foreign suppliers may be cheating, selling soybeans that weren't actually grown according to organic rules.

Clarkson, the grain trader, says he does have to be on his guard, "but last year, when the USDA National Organic Program's enforcement folks were looking into this, most of the people who were ejected from the organic world for fraud happened to be good old faithful Americans," he says. "A few happened to be Chinese. No matter where you are, you need to know your chain of supply."

That supply chain, reaching all the way back to certified organic soybean fields in China or India, has become the key to putting organic eggs and chicken meat on America's grocery shelves.