Accessibility links
In The New Globalized Diet, Wheat, Soy And Palm Oil Rule : The Salt People around the world are eating a wider range of foods. But as a whole, we are increasingly reliant on a few crops. Researchers say that increases the risk of agricultural disaster. 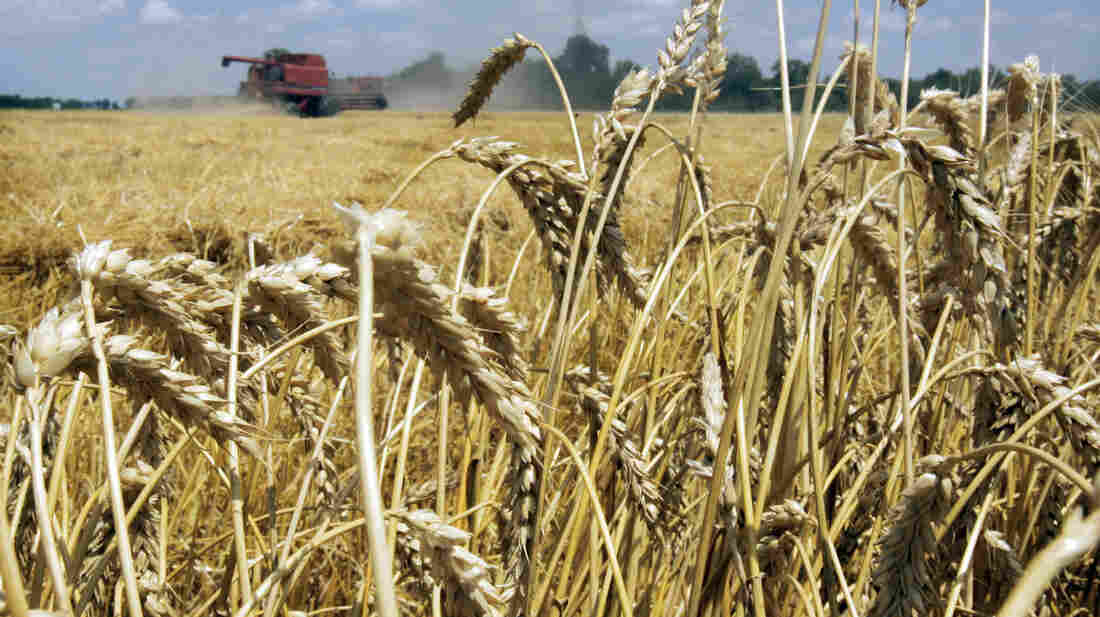 The world is increasingly relying on a few dozen megacrops, like wheat and potatoes, for survival. Above, a wheat field in Arkansas. Danny Johnston/AP hide caption 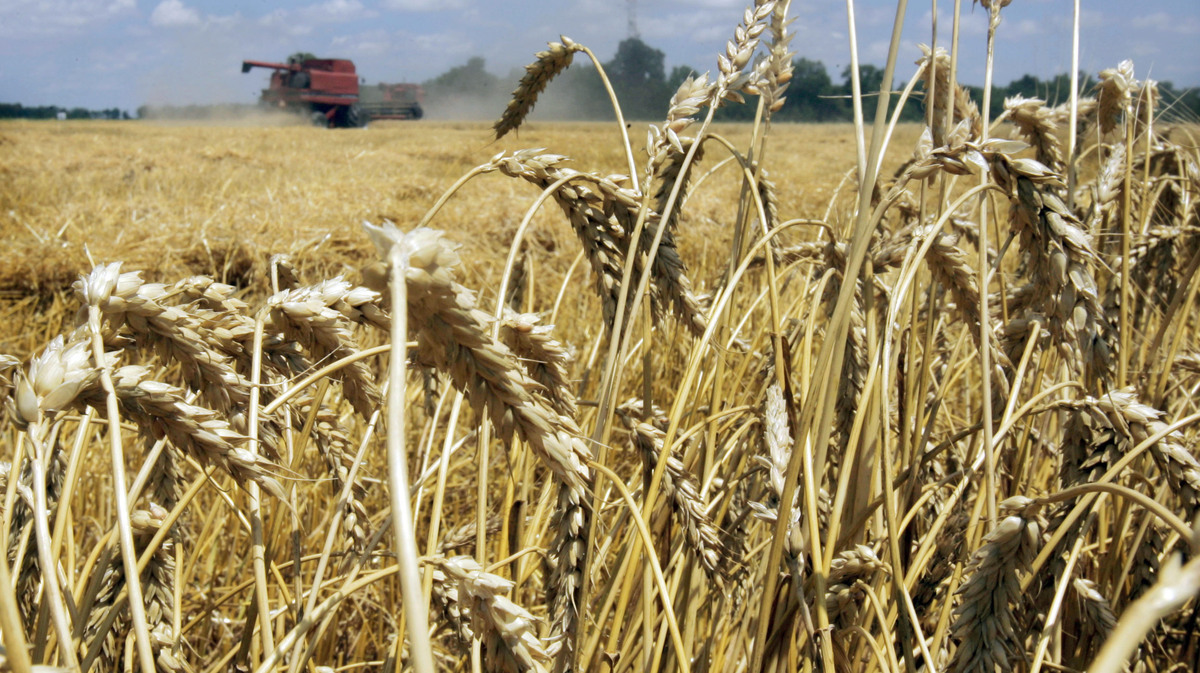 The world is increasingly relying on a few dozen megacrops, like wheat and potatoes, for survival. Above, a wheat field in Arkansas.

These days you can fly to far corners of the world and eat pretty much the same food you can get back home. There's pizza in China and sushi in Ethiopia.

A new scientific study shows that something similar is true of the crops that farmers grow. Increasingly, there's a standard global diet, and the human race is depending more and more on a handful of major crops for much of its food.

At the same time, all over the world, people are eating a bigger variety of foods. But until now, no one had crunched the numbers to see whether global diets were overall getting less — or more — diverse.

"We wanted to know, really, how many crops feed the world, and what's happening with them," says Colin Khoury, a visiting researcher at the International Center for Tropical Agriculture, or CIAT, in Cali, Colombia.

Khoury and his collaborators went through 50 years of data collected by the United Nations' Food and Agriculture Organization. And they uncovered two big trends. 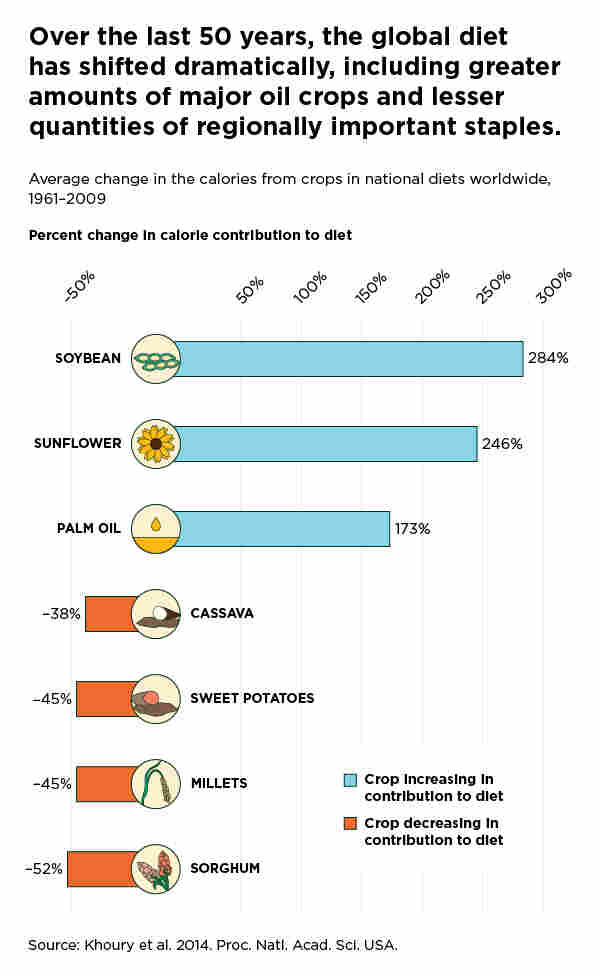 The first: "Hey, actually, there's places where diets are diversifying, where they're adding crops," says Khoury.

In parts of Asia, such as China, rice is a declining portion of the average person's diet as they add other foods that are now more available. In the U.S., meanwhile, people are eating more imported foods, like mangoes and coconut water.

But here's the second discovery: Those bigger menus of food also are getting more and more similar to each other, from Nanjing to Nairobi. Everybody is relying more and more heavily on a few dozen global megafoods.

Many of those foods are part of what you'd call a standard Western diet, including wheat, potatoes and dairy. But other megacrops come from the tropics, such as palm oil. "It's grown on a large scale in Malaysia and Indonesia, but it's become a global commodity in diets essentially everywhere," says Khoury.

Smaller crops, meanwhile, are getting pushed aside. Sorghum and millet, for instance, are grown quite widely around the world, but they're losing out to corn and soybeans. Other small crops that you only find in certain areas could disappear altogether.

"In the Andes, aside from the potato, most of the rest of the traditional roots and tubers, crops like oca and maca, are declining in the amount of production and the amount of consumption," says Khoury.

A lot of things are driving this trend, he says. There's a rise in international trade, but also "people moving to cities, having more access to supermarkets, to fast food, having less time to cook, not having gardens."

The trend toward greater dependence on fewer crops continues, Khoury says. And so do the risks. It's dangerous to depend on just a few crops, because any one of them could be hit by some disaster, such as disease.

But governments and international organizations can still help to safeguard diversity in food sources. They can act to preserve the many genetic varieties of megacrops that still exist, and also preserve and encourage cultivation of minor crops, he says.

Rachel Laudan, a historian at the University of Texas and author of Cuisine and Empire: Cooking in World History, says it's important to remember that what drives the rise and fall of crops is demand for them after they've been transformed into something mouth-watering. "They're only interesting if they've been processed in some way," she says.

That's what turned wheat into a megacrop. Root crops, by contrast, were difficult to store, transport or process into interesting foods.

We could still turn some of these minor crops into attractive foods if there's enough interest in them, she says. In fact, interest may be reviving.

Consumers in the U.S. and Europe are snapping up little-known tropical fruits and so-called ancient grains, like farro and quinoa. Perhaps some of those minor crops can get their own spot on the global menu.