Accessibility links
Moo-d Music: Do Cows Really Prefer Slow Jams? : The Salt Some farmers have long sworn by mellow tunes to boost Bessie's milk production. The science is hardly conclusive. But a study hints at what might top the barnyard playlist. (Psst: They liked R.E.M.) 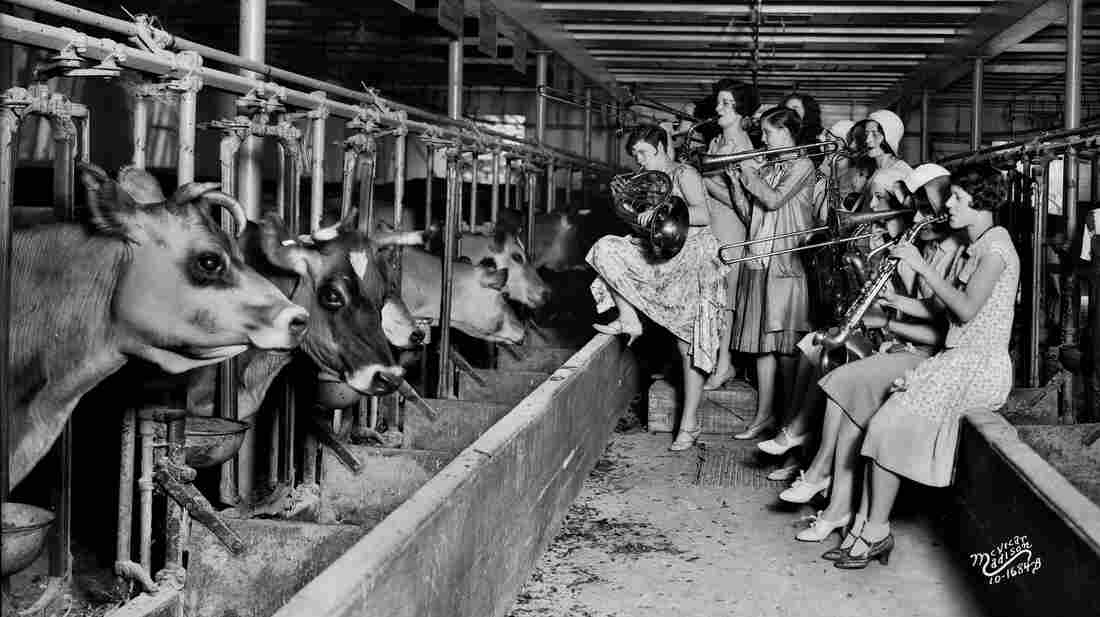 The Ingenues, an all-girl band and vaudeville act, serenade the cows in the University of Wisconsin, Madison's dairy barn in 1930. The show was apparently part of an experiment to see whether the soothing strains of music boosted the cows' milk production. Angus B. McVicar/Wisconsin Historical Society hide caption 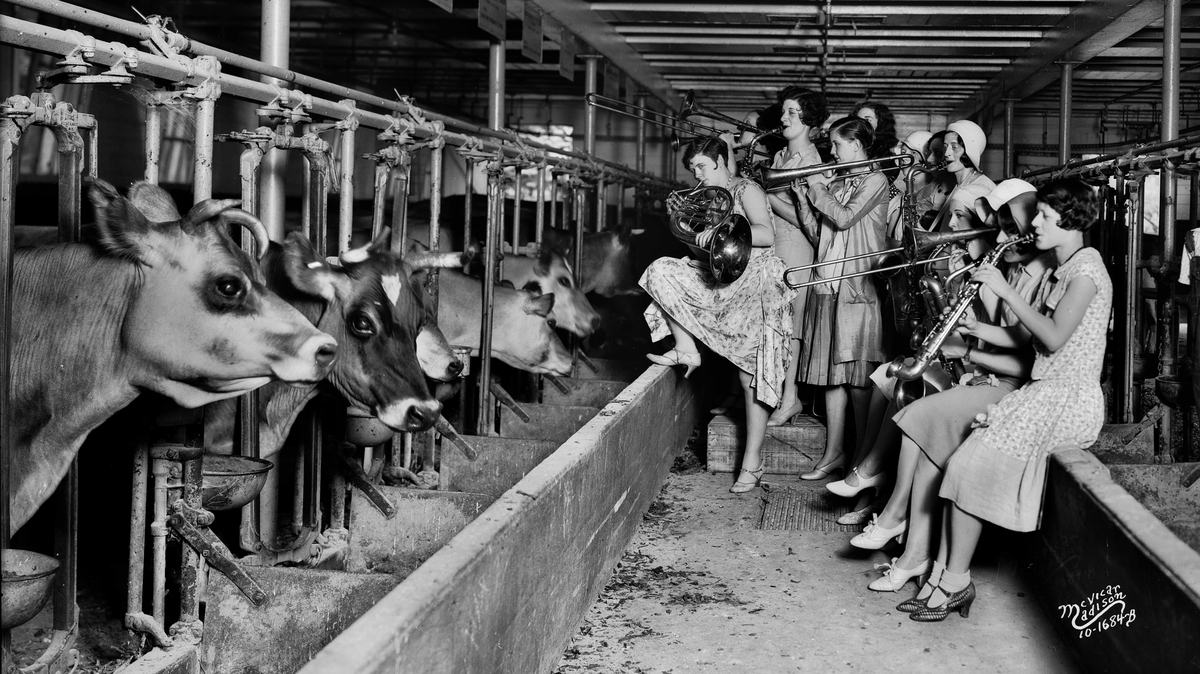 The Ingenues, an all-girl band and vaudeville act, serenade the cows in the University of Wisconsin, Madison's dairy barn in 1930. The show was apparently part of an experiment to see whether the soothing strains of music boosted the cows' milk production.

So what do cows consider to be good mood music for milking? Here's what that 2001 study from the University of Leicester found, in no particular order. (Sadly, no word on where the cows fell on Barry White.):

When it's time to buckle down and focus, plenty of office workers will put on headphones to help them drown out distractions and be more productive. But can music also help dairy cows get down to business?

Some dairy farmers have long suspected that's the case. It's not unheard of for farmers to play relaxing jams for their herds to boost milk production, as the folks at Modern Farmer recently reported.

A tantalizing 2001 study out of the University of Leicester in the U.K. appeared to lend credence to those claims. It found that milk production went up by as much as 3 percent when cows listened to slow tunes like R.E.M.'s "Everybody Hurts" and Simon & Garfunkel's "Bridge over Troubled Water," rather than faster songs.

Less popular among these bovine beat lovers? The Beatles' "Back in the U.S.S.R.," Jamiroquai's "Space Cowboy," and Supergrass' "Pumping on Your Stereo." (Yes, it was most definitely 2001.) Apparently, slow songs with less than 100 beats per minute hit the milking sweet spot, the researchers found.

"It seems that slow music had the effect of alleviating stress and relaxing the animals, which resulted in greater milk yields," Adrian North, a music researcher and one of two psychologists who conducted the study, said at the time the findings were released.

We loved the idea of Bessie and friends as music aficionados. Alas, the science of music and milking remains sketchy at best, says Anne Marie de Passille, a Canadian research scientist who studies cow behavior and welfare. (She recently filled us in on another fascinating aspect of the inner lives of cows: "jumping for joy.")

De Passille says no one has replicated the results of that 2001 study — in part because setting up and repeating the kind of controlled, large-scale experiments needed to really nail down the science would be pretty expensive. So for now, the research remains inconclusive.

"We don't really know what the relationship is" between cows' musical preferences and milk production, she tells us.

A herd of French cows gets a jazz serenade from the band New Hot 5.

Even so, that didn't keep British Columbia's BC Dairy Association from milking the concept with an advertising campaign it ran a couple of years ago. Called Music Makes More Milk, the campaign invited the public to create milking tunes for cows and submit them online.

The ultimate judges? The cows themselves, of course: The finalist compositions were played for the animals while they were milked. The winner — selected because cows were most productive when it was played — was this slow number called "A Moo Down Milk Lane." (All of the entries sounded similar to us, frankly. Like Muzak for cows.)

Jeffrey Rushen, de Passille's fellow researcher at Agriculture and Agri-Food Canada, says that whatever effect tunes may have on dairy cows, it's possible that the type of melodies played may be less important than some have suggested.

"It may be more that the music blocks out unpleasant or unexpected noises" — such as from milking machinery, he tells The Salt.

De Passille, too, is skeptical that when it comes to music for cows, one type fits all.

"When you think about it, the chances that all cows would like the same music are really slim," she says. "I think they are individuals, and we didn't select them for their taste in music. ... Why would they all like the same music?"