Accessibility links
Why We Should Quit Tossing Fish Heads And Eat 'Em Up Instead. Yum! : The Salt If you really want to fight food waste, eat fish heads, the U.N. says. They're nutritious and delicious, but most fish heads get thrown back in the sea as trash or turned into livestock feed. 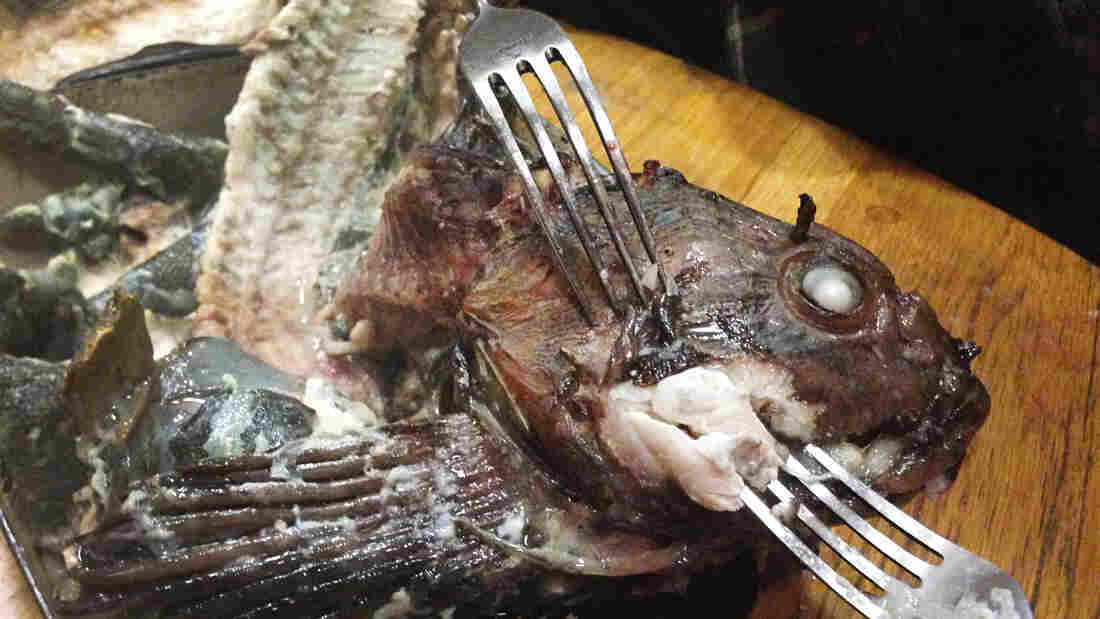 The head of a cabezon fish prepared by the author. Alastair Bland for NPR hide caption 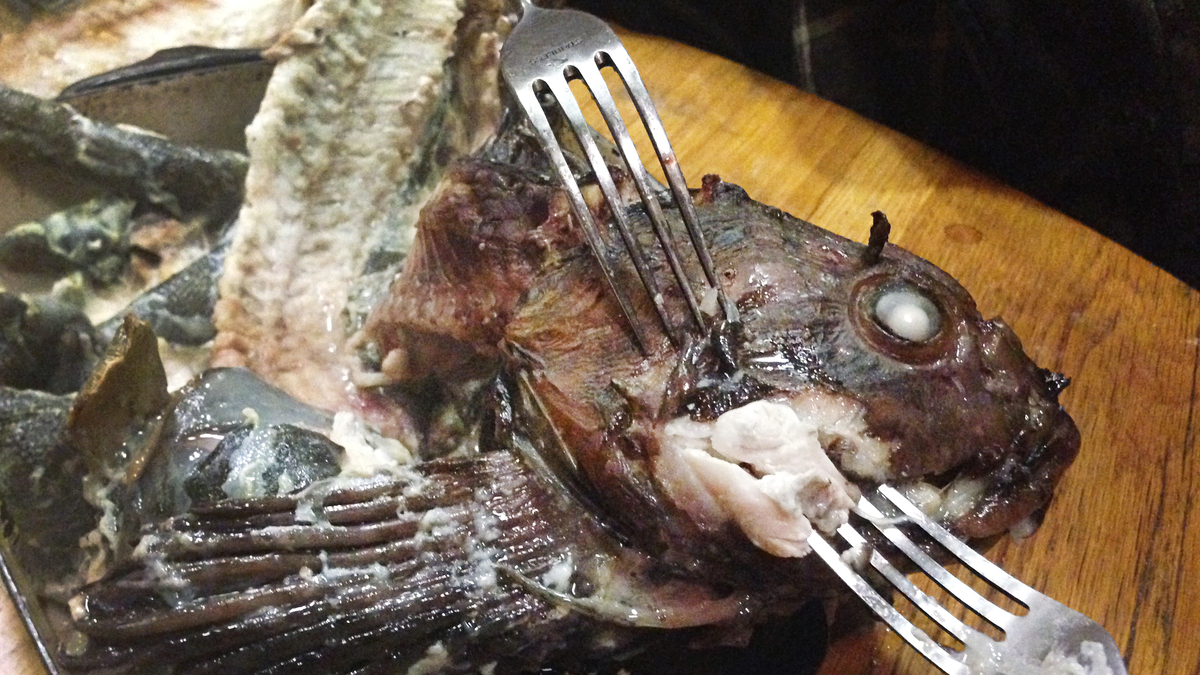 The head of a cabezon fish prepared by the author.

About a decade ago, I backpacked the coastal desert of Baja California, Mexico, feasting daily on snapper and corvina that I caught and grilled whole over driftwood beach fires.

The highlight, for me, were their heads, which oozed with sizzling fat and were packed with extra-tender meat along the jawbones, around the eye sockets, below the gill plates and in the cheeks. Even the eyeballs and the softer pieces of cartilage were delicious. I devoured all but their backbones and ribs, which I threw in the fire pit to char.

But most North Americans and Europeans miss out on the joys of fish heads, preferring to eat only clean, boneless filets. And with little demand for fish byproducts worldwide, most heads, tails and carcasses are processed into livestock feed or farm fertilizer or thrown back into the sea.

The United Nations Food and Agriculture Organization recently called out the absurdity of this waste, suggesting it's time to get more fish heads on people's plates.

"We must ensure that these byproducts are not wasted," Audun Lem, chief of FAO's products, trade and marketing branch, said in a statement.

Norwegian fishermen alone dumped an estimated 220,000 tons of wild fish parts at sea in 2011 after processing their catch on the water, according to a report published in February in the journal Trends in Food Science and Technology. Filleting a fish and tossing the scraps can be extremely wasteful, producing two to three pounds of head and scraps for every pound of boneless, skinless meat, the National Marine Fisheries Service reports. 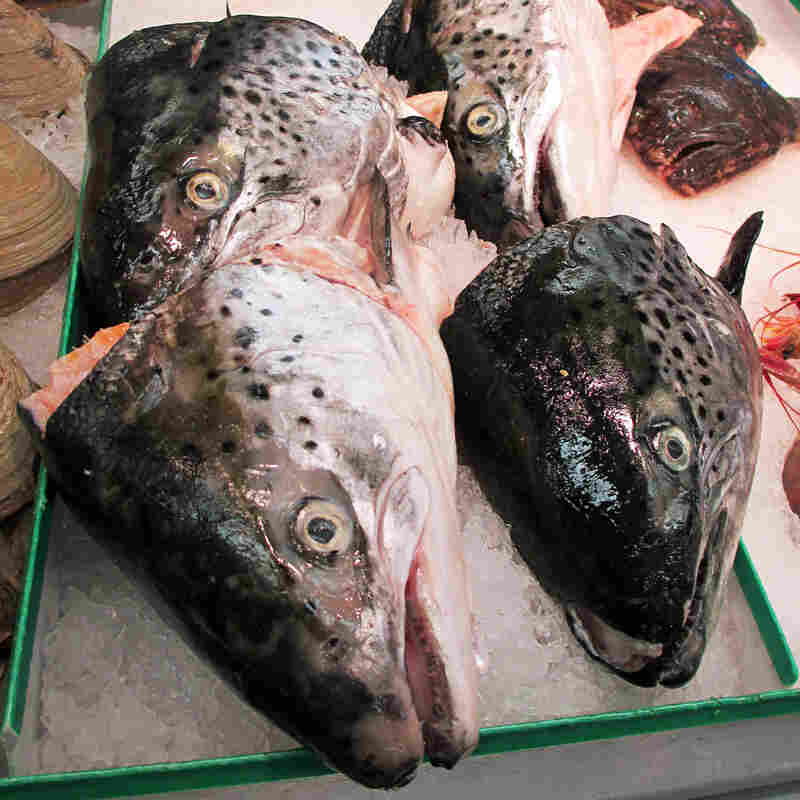 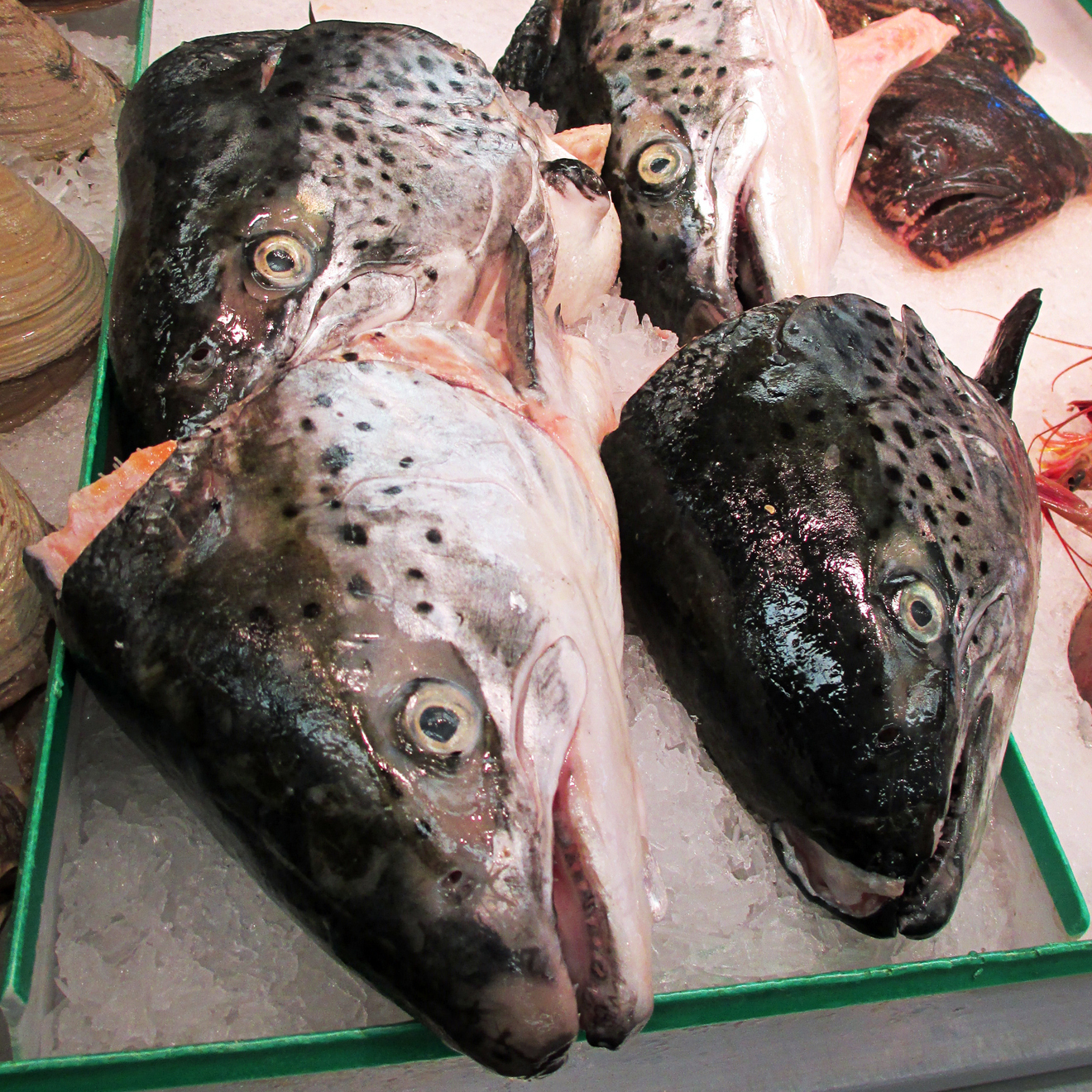 Heads of farmed Atlantic salmon for sale at an Asian-owned grocery store in San Francisco.

Jogeir Toppe, a scientist with the FAO in Rome, studies the economics and logistics of utilizing fish byproducts. He says there are lots of incentives for developing the market for fish heads and bones at a mass scale.

Fish bones, brains, cartilage and fat are nutritious, containing extra-high levels of vitamin A, omega-3 fatty acids, iron, zinc and calcium, according to Toppe. And using such scraps for human food could also benefit the environment by reducing pollution from processing facilities.

"From the nutritional, environmental and economic points of view, it makes perfect sense to use all parts of the fish," Toppe tells The Salt. (The exception, he notes, is shark, orange roughy, swordfish and some tuna heads, because they could contain high levels of mercury and other toxins.)

Of course, eating fish heads isn't a novel idea in many parts of the world. In Southeast Asia, fish head curry is a popular item. Toppe, who has studied diets in Africa, notes people living around Lake Victoria who catch Nile perch fillet the fish and send the meat to Europe. And they get to enjoy the heads and other remains at home.

A few nations, including Iceland, Norway, Scotland and the U.S., send frozen or dehydrated cod and salmon heads to Africa and Asia, and Toppe says entrepreneurs around the world are edging into this business.

Frank Allen runs an operation called Live Online Seafood that transfers frozen cod heads from Alaskan fishing vessels directly to trans-Pacific freighters at the port of Dutch Harbor. From there, the meaty heads are shipped to China and South Korea, where they are prized for making fish soup.

The cod heads, Allen says, include the collar meat behind the gills and amount to about a third of the entire fish. Allen's company currently handles about 40 tons of cod heads per month — less, he estimates, than 1 percent the total amount of cod heads macerated and pumped overboard from Alaskan fish processing boats. He hopes eventually to be delivering cod heads to nations in Africa.

"That's where people really need it the most," Allen says.

Another Alaskan company, called Alaska Marine Nutrition near Kenai, renders salmon heads into oil, which is packed into one-gram capsules and marketed as a nutritional supplement in the U.S.

Co-owner Richard Mullins says that seems to be the most effective way to market the nutritional goodness of fish heads to Americans.

"We have a thing in our culture about eating things with eyes," Mullins says.

But those who want to give fish heads a try can often find salmon heads and other fish scraps at Asian grocery stores and outdoor fish markets.

"I sell all of my salmon byproducts," says commercial fisherman Pat O'Shea, who peddles fish parts, along with steaks and fillets, at San Francisco markets. Filipinos in the area, he says, buys his salmon heads to make a soup called sinigang, while Chinese-American customers often buy the tails to bake and eat like chips.

If you're still leery of trying a whole fish head, then maybe this short film, featuring the song "Fish Heads" by the duo Barnes and Barnes, will stoke you're appetite: "Eat them up, yum!"