Accessibility links
No-Kill Caviar Aims To Keep The Treat And Save The Sturgeon : The Salt A method of extracting eggs from sturgeon without killing or cutting aims to revamp the industry and lower prices for this long-luxe treat. Critics say the idea is great. The taste? That's debatable. 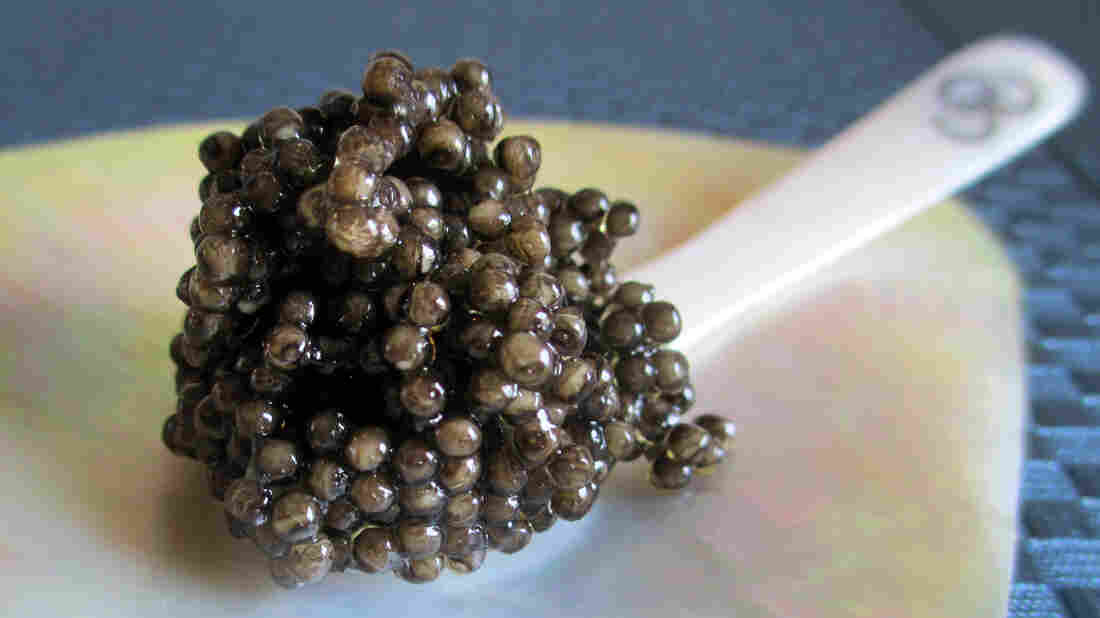 This Vivace "no-kill" caviar was harvested from a Siberian sturgeon via a massage-based technique. The fish didn't die. But did the taste survive? Alastair Bland for NPR hide caption 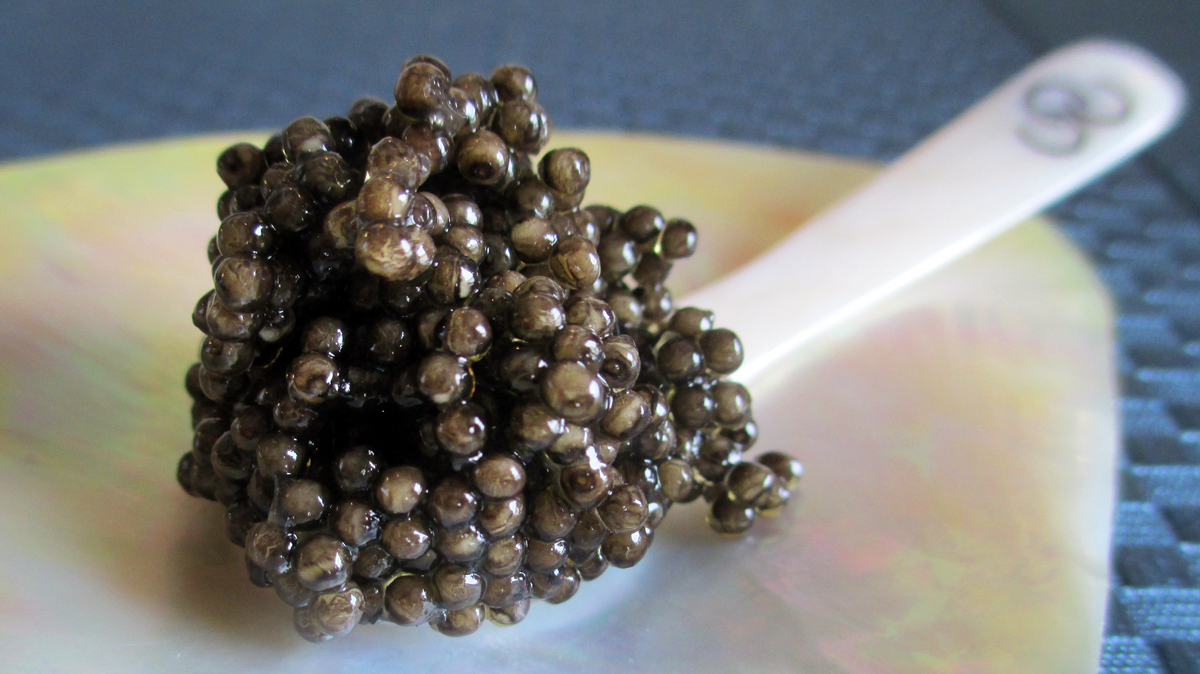 This Vivace "no-kill" caviar was harvested from a Siberian sturgeon via a massage-based technique. The fish didn't die. But did the taste survive?

Caviar was once the food of kings and czars — and for a sturgeon, it meant death.

But a new technique of massaging the ripe eggs from a female sturgeon — without killing or even cutting the fish open— could make caviar more abundant, more affordable, and more accessible to all.

Best of all, says Angela Köhler, the German scientist who has spent nine years developing the new production system, "no-kill caviar" — also being called "cruelty-free caviar" and "correct caviar" by the people marketing it — could help reduce demand for black market caviar and save endangered wild sturgeon from being hunted to extinction.

The idea is to turn the caviar farming industry into something more akin to the commercial production of poultry, eggs or milk. The new method, being practiced at a small farm in Loxstedt, Germany, called Vivace GmbH, involves first viewing a sturgeon's eggs by ultrasound. If they are deemed ready, a signaling protein is administered to the sturgeon several days before the egg harvest.

This, Köhler says, "induces labor" and releases the eggs from a membranous sack in the belly cavity. At that point, the eggs can be pumped from the belly with gentle massaging. Köhler says the process can be repeated every 15 months or so throughout a sturgeon's lifetime, which may last decades.

The method is considered by some an improvement over so-called "C-section caviar" production, which requires making a small incision in the female fish to access her eggs. The operation allows the producer to harvest the roe without using any chemicals to induce egg-laying. But C-sections subject a sturgeon to the risk of fatal infection and can damage the fish's ovaries, reducing future roe yields.

"[The Vivace method] will make caviar production more financially reasonable," Köhler says. "It doesn't make much sense to take a fish that needs seven or eight years to mature and then, when it has its first eggs, kill it."

The Vivace farm in Loxstedt produced only about 1,100 pounds of caviar last year, Köhler says. If demand grows, output could eventually rise to 10 tons per year.

That's still just a tiny fraction of current global output. But if enough other caviar farms adopt her method — which would involve paying money for proprietary information about the process — Köhler says caviar farming could become a relatively cheap endeavor. Supply could increase as prices dive. In the end, low-priced no-kill caviar could undercut the market for illegally produced wild sturgeon caviar.

But some skeptics doubt that no-kill caviar will catch on.

Geno Evans, owner of Anastasia Gold Caviar, in Pierson, Fla., has tried making caviar without killing his fish. He wasn't impressed. In order to massage the roe from the fish's body cavity, he explains, you have to wait until a sturgeon is nearly ready to lay her eggs. For Evans, this resulted in overly oily, soft caviar.

Köhler's method addresses this texture issue by rinsing the tender, overripe roe immediately in a calcium-water solution. This makes the oil-rich pearls durable enough to undergo salting and curing without breaking.

It also improves the texture, according to Deborah Keane, owner of the California Caviar Company, in Sausalito, Calif., currently the only American importer of Vivace no-kill caviar.

"You get what chefs call the 'Caspian pop' — a very firm snap in your mouth as you bite each egg," says Keane.

Wesley Holton, the executive chef of Rose. Rabbit. Lie. in Las Vegas, is among several American chefs using the product. He says Vivace caviar tastes about the same as traditional caviar, but withstands heat better. (The traditional stuff tends to wilt when cooked.)

The Salt sampled the Vivace caviar alongside more traditional styles at Keane's tasting room. The traditional caviar from Acipenser baerii, the Siberian sturgeon, was creamy and buttery, with a pronounced flavor of brine, sardines and smoked salmon.

A similar product made from the eggs of A. transmontanus, the white sturgeon of Western North America, was also buttery smooth, with a salty flavor and an interesting finish of pond water and river fish.

The Vivace A. baerii caviar was entirely different. The tiny black eggs did not melt in the mouth but, rather, popped. Flavor was faint and subdued, with quiet hints of salt marsh and catfish. It was not our favorite of the three.

And then there's the question of price.

For now, an ounce of Vivace will run you $125 to $135 in Keane's shop, compared to $105 an ounce for conventional caviar of the same species. A custom-packed jar of Vivace "golden caviar," taken from albino fish, will fetch up to $800 per ounce.

But Keane argues that if more farms adopt the Vivace method, no-kill caviar could eventually become "an everyday indulgence," bringing costs down to $20 or $30 per ounce.

Which brings us to the ultimate question, as raised by Sacramento, California-area sturgeon farmer Michael Passmore.

"Why would producers of caviar want prices to continue to drop?"