Accessibility links
What Pepsi Can Teach Us About Soft (Drink) Power In Russia : The Salt The soft drink giant is one of the few big U.S. firms with major investments in Russia. And the reasons why say a lot about why the U.S. has less leverage in Russia than it might like. 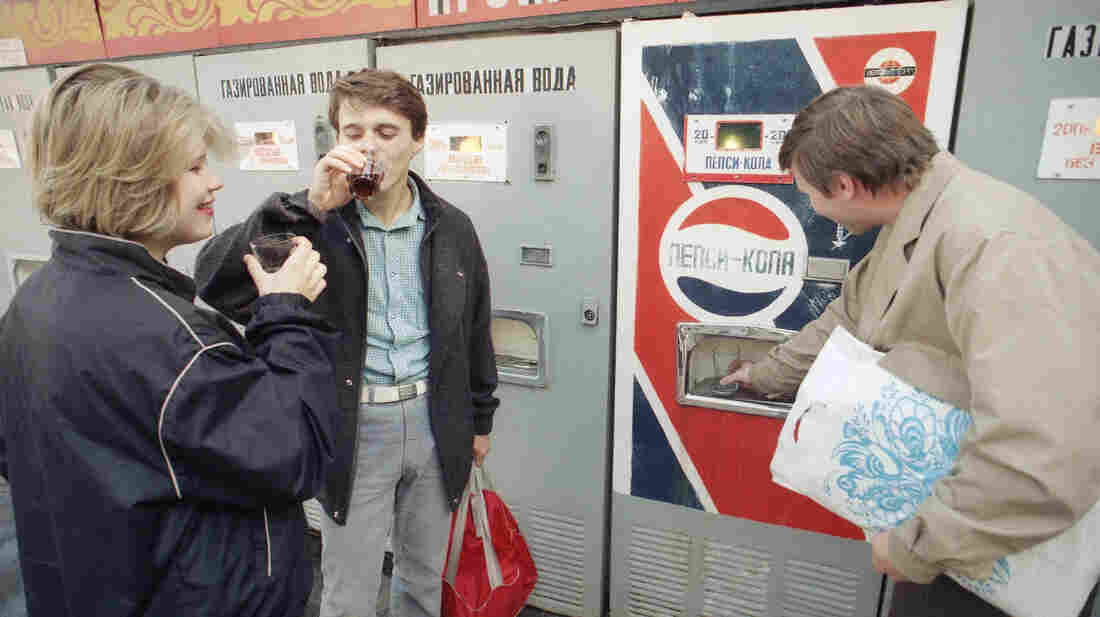 Pepsi was the first American consumer product to be manufactured and sold in the former Soviet Union. In 1991, Russians could buy the soda for 20 kopeks, about 10 cents. Peter Dejong/AP hide caption 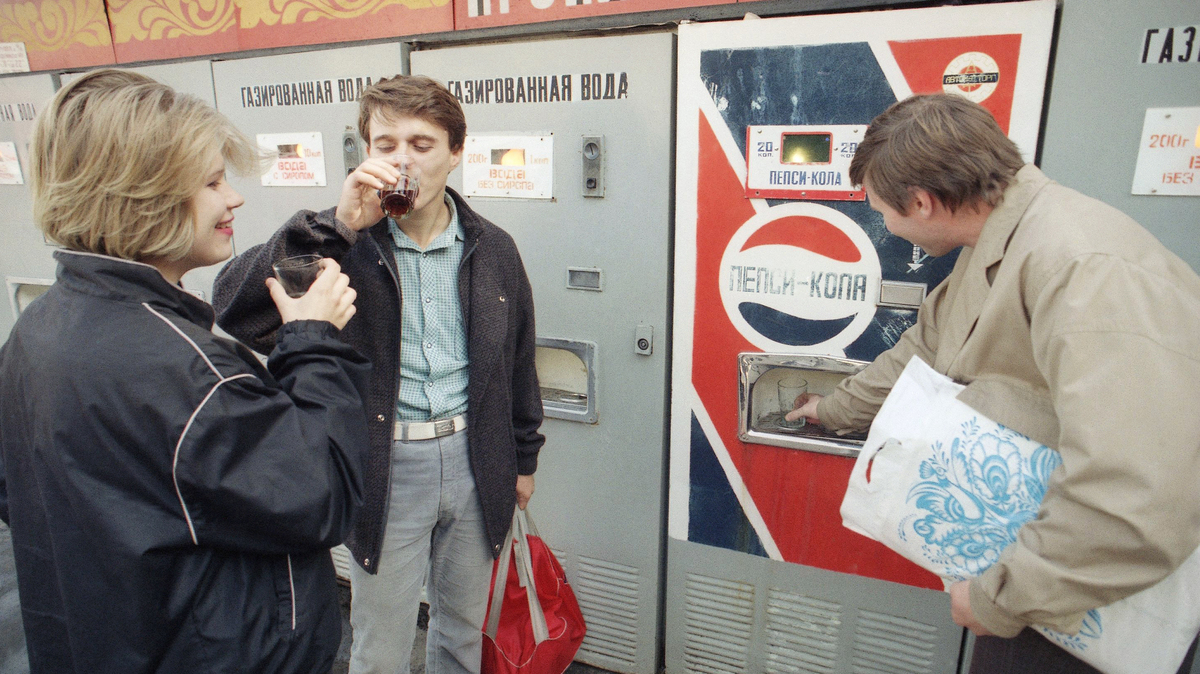 Pepsi was the first American consumer product to be manufactured and sold in the former Soviet Union. In 1991, Russians could buy the soda for 20 kopeks, about 10 cents.

The United States has threatened economic sanctions against Moscow, but America is light on financial leverage in Russia: The country represents less than 1 percent of U.S. trade, and few major U.S. companies have significant investments there.

But one company with a long history in Russia is Pepsi.

1972: A deal is stuck: PepsiCo will manufacture Pepsi in Russia, in exchange for marketing and importing vodka, and other Soviet liquors, to the U.S.

1974: Pepsi becomes the first American consumer product to be produced, marketed and sold in the former Soviet Union.

1990: PepsiCo signs the largest commercial trade agreement in history with the Soviet Union.

So how did the American soft drink giant get its foot in the door to build a major market in Russia?

This story of how Pepsi came to be sold widely in Russia could give us some insight into how the two counties do or don't do business with each other. The relationship dates back to the Soviet era.

During the Cold War, then-Vice President Richard Nixon visited Soviet Russia to meet with Premier Nikita Khrushchev, which produced some memorable moments. The two men stood in front of a microphone and sparred, with the help of interpreters, in a televised session now known as the Kitchen Debate. The 1959 debate, which you can watch on YouTube, is all kinds of historical, nerdy awesomeness.

"You plan to outstrip us, particularly in the production of consumer goods. If this competition is to do the best for both of our peoples and for people everywhere, there must be a free exchange of ideas," Nixon said as Khrushchev began to speak over him. "You never concede anything."

One thing Russia didn't have on us was brown, fizzy, sugary, delicious drinks. At that debate, Nixon and Khrushchev shared a Pepsi.

At the time, this shared drink gave Donald Kendall a bright idea. Kendall, who was a buddy of Nixon's, was the head of Pepsi's international operations at the time.

"[Kendall] went to Russia in 1959 and struck up a good relationship with Nikita Khrushchev," recounts Anders Aslund with the Peterson Institute for International Economics.

Nixon, Khrushchev And A Story Of Cold War Love

Later, the Soviet government itself began bottling Pepsi, but it wasn't the drink we know.

"Pepsi was perceived by the population as a Soviet product, and Soviet products were truly bad," Aslund says. "While Pepsi was reasonably good, it was not as good as Western Pepsi."

Good or bad, Pepsi was the only option.

Then the Berlin Wall fell. When the Soviet Union closed, a form of free enterprise opened. In the 1990s, there was a boom in the U.S., and American companies were looking to grow.

During this time, Pepsi was getting its butt kicked by Coca-Cola all over the world, says Ali Dibadj, a senior analyst with equity research firm Sanford Bernstein who studies packaged goods such as soda and chips. Dibadj says Pepsi had one key element going for it: The company knew a lot about Russia.

"Pepsi had to find a place to grow that was the path of least resistance, and arguably built on the history, since 1959, and the lower penetration by The Coca-Cola Company. Russia was the closest-to-home option, and it wasn't that close to home," Dibadj says.

It worked. Russia is now Pepsi's second-largest market behind the U.S., accounting for roughly 8 percent of sales.

So if Pepsi could become a dominant consumer force in Russia, then why hasn't everyone followed suit?

Well, companies such as Ford, Nike, McDonald's, Boeing and John Deere do have investments in the country, but they don't rely on the Russian market like Pepsi does. The reason, Dibadj says, is that Russia is unpredictable, and so are its consumers.

"The consumer has a history — given communism, given what they've been though — to, at the first sign of fear, shift very quickly to either different pack sizes [or] different brands. And [Russian consumers] have historically been used to lower-quality brands," Dibadj says.

At the first sign of trouble, Russian consumers go from drinking soda to tap water. Not only that, it's really hard for companies to get into Russia. With such a large country, you have to build giant distribution networks, and there's a lot of red tape.

"We don't have a lot of economic leverage," Dibadj says. "There's not a lot of stuff that Russians buy from us, and we don't buy that much stuff from Russia."

It's the age-old chicken and egg problem, says Amit Khandelwal, who teaches at Columbia University's Business School. American businesses, he says, are afraid to invest in Russia because it's risky; and it might be less risky if there were more of a U.S. corporate presence there.

In other words, in order for the U.S. to have more soft power in Russia, the U.S. will have to sell that country more than soft drinks.