Accessibility links
For A Faster-Aged Bourbon, You Need The Motion Of The Ocean : The Salt The longer bourbon ages, the richer its flavor and color. Now, an artisan Kentucky distiller is speeding up nature by sending barrels on boat journeys on the high seas. How does it work? Chemistry. 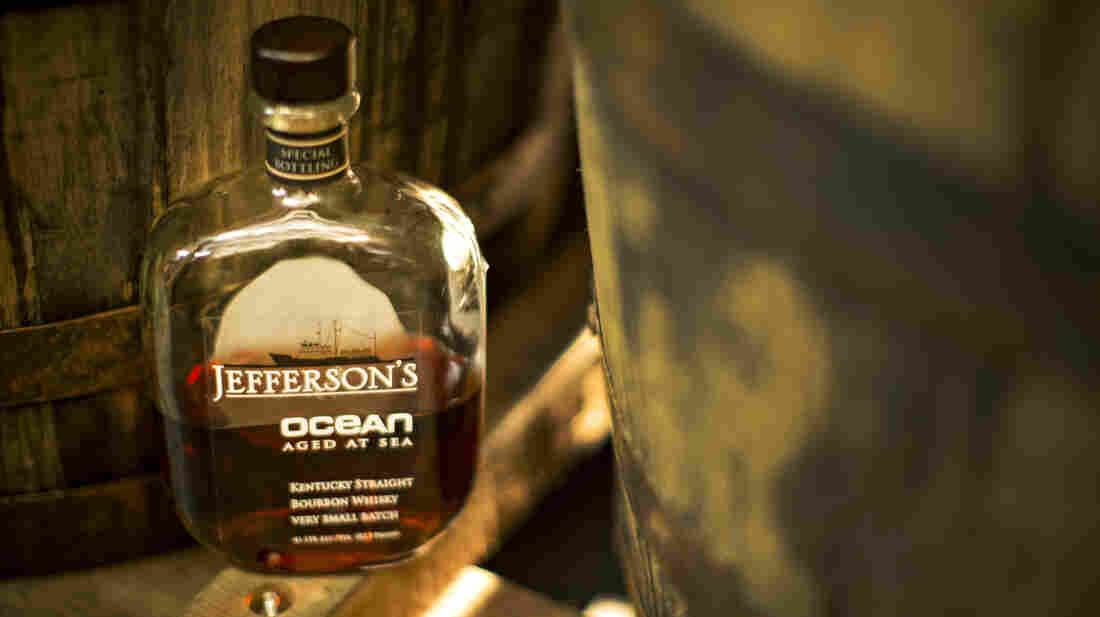 Jefferson's Ocean bourbon is aged on the high seas, a technique that takes advantage of basic physical chemistry. The bottles sell for $200 a piece. Courtesy of OCEARCH hide caption 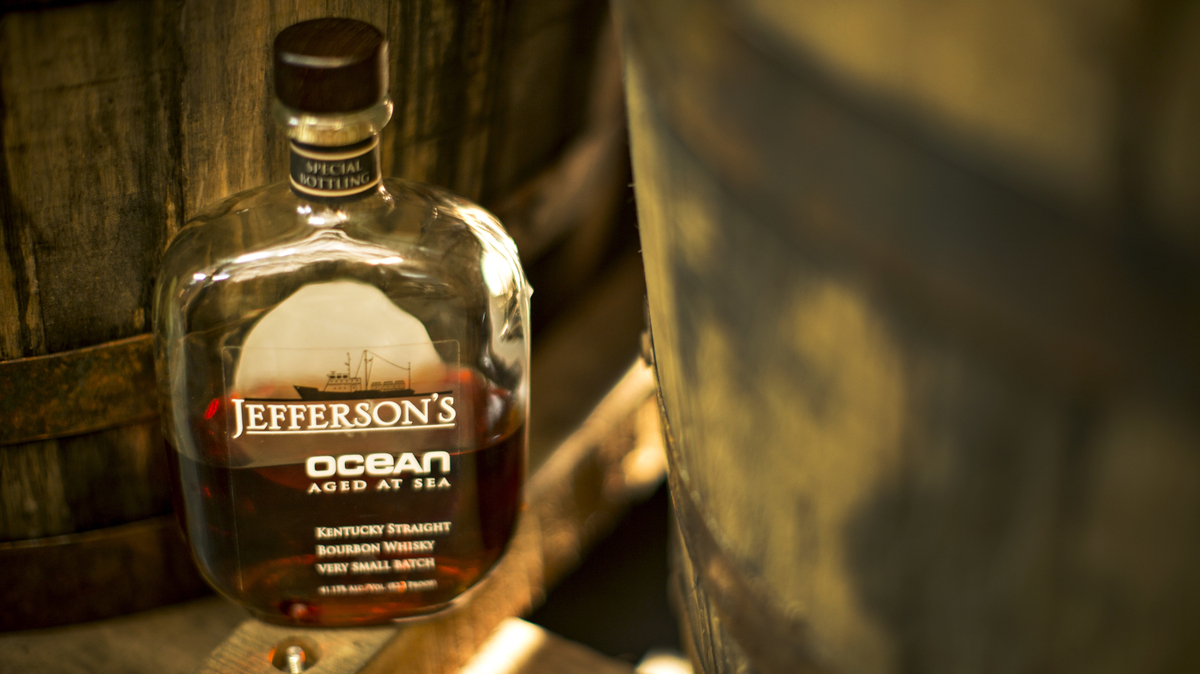 Jefferson's Ocean bourbon is aged on the high seas, a technique that takes advantage of basic physical chemistry. The bottles sell for $200 a piece.

From its earliest days as America's homegrown whiskey elixir, Kentucky bourbon has been traveling on boats.

In fact, boats were a key reason why Kentucky became the king of bourbon. In the late 1700s, trade depended on waterways, and distillers in the state had a big advantage: the Ohio River. They'd load their barrels onto flatboats on the Ohio, which flowed into the Mississippi, taking their golden liquor as far down as New Orleans.

Back then, placing barrels on boats was a necessity. These days, it's become a novelty: Eighth-generation Kentucky bourbon distiller Trey Zoeller is using the motion of the ocean to produce bottles worth $200 each.

"We're going back to how bourbon was initially aged," Zoeller tells The Salt. "The color and flavor came from the rocking on the water. Bourbon was loaded on to ships in Kentucky, and by the time it travelled to the people buying it, the flavor improved."

Bourbon is a family legacy for Zoeller. His great-great-great grandmother was among the first female distillers and his father, Chet, is a bourbon scholar. Zoeller has been in the artisanal whiskey business since the 1990s with his Jefferson's Bourbon. Five years ago, Zoeller was celebrating his birthday on a friend's boat off the coast of Costa Rica. As two Kentucky boys are wont to do, they were raising glasses full of bourbon. That's when Zoeller got the idea to send barrels of bourbon out to sea. 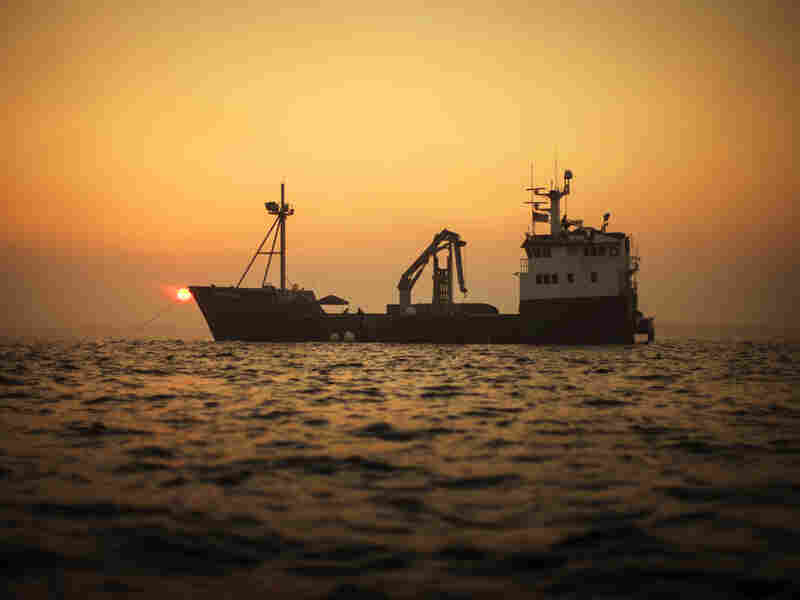 This OCEARCH ship carried Zoeller's first bourbon-aged barrels for three and a half years, covering more than 10,000 nautical miles. According to Tom Collins, a chemist at UC Davis, the higher temperatures of tropical locales, and the swill of the ocean, can accelerate the whiskey aging process. Courtesy of OCEARCH hide caption 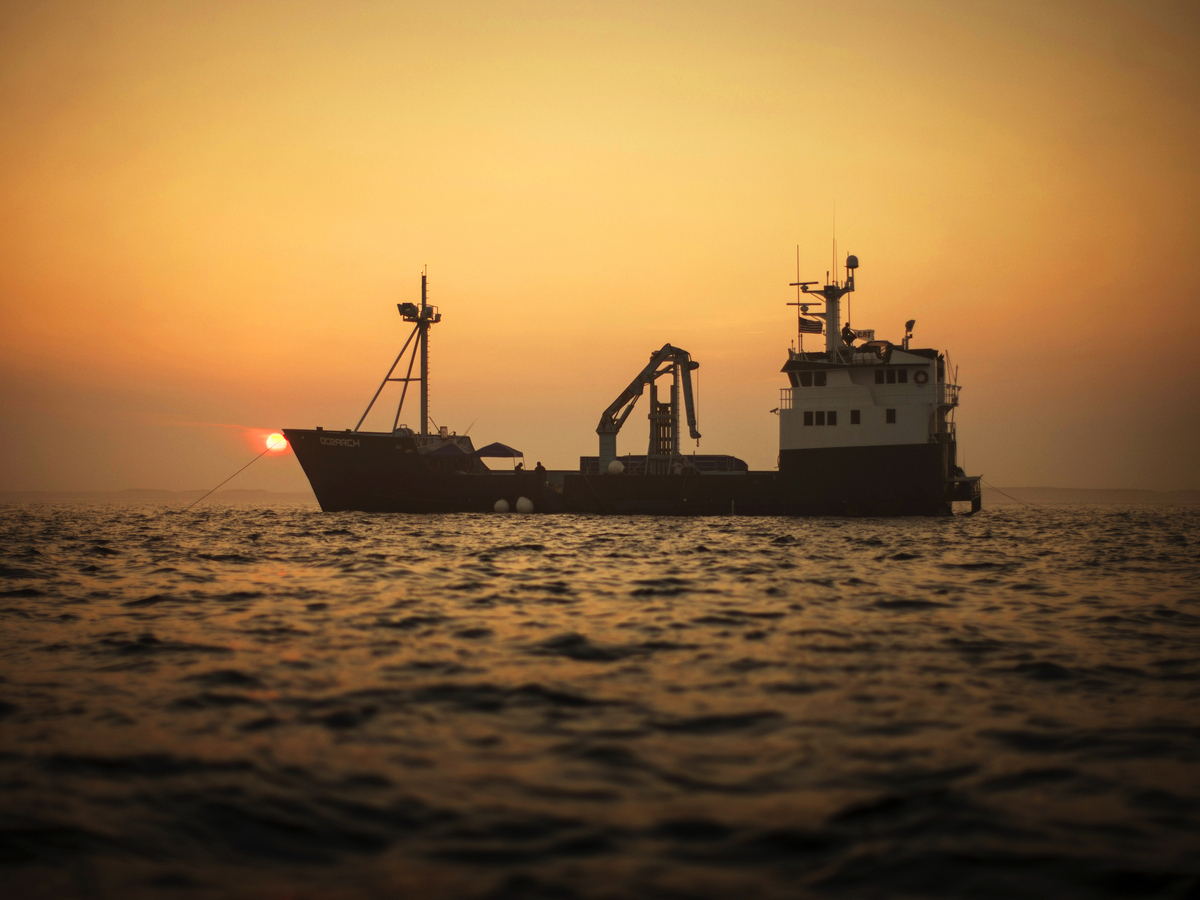 This OCEARCH ship carried Zoeller's first bourbon-aged barrels for three and a half years, covering more than 10,000 nautical miles. According to Tom Collins, a chemist at UC Davis, the higher temperatures of tropical locales, and the swill of the ocean, can accelerate the whiskey aging process.

Chemist Tom Collins, a researcher at the University of California, Davis, who has analyzed the flavor profiles of American whiskeys, says higher temperatures like those found in tropical locales, and the swill of the ocean, can both accelerate the whiskey aging process.

"The daily swing in temperature matters," Collins explains. "As the liquid warms up, it expands into the wood. And then as it cools down, it contracts, which can improve extraction" of compounds from the wood – compounds that give aged whiskey its characteristic flavor. "These reactions are generally favored with higher temperatures."

After his initial revelation, Zoeller sent five barrels of recently distilled bourbon out to sea with Chris Fischer. A high school friend of Zoeller's, Fischer heads OCEARCH, an organization that tracks sharks and other endangered marine life. He kept the barrels on board his ship for three and a half years. Fischer covered more than 10,000 nautical miles, travelling south of the equator and in and out of the Panama Canal six times.

So what happened when Zoeller tapped those first barrels?

"The experiment totally exceeded our expectations," he says. "The bourbon went in clear as water and came out black. Bourbon always picks up color in the barrel, but this 4-year-old bourbon was darker than 30-year-old bourbon."

And the salt air gave the bourbon a briny taste — more similar to an Irish single malt — and coloring like dark rum, Zoeller says.

The unique combination fuelled a buying frenzy among bourbon enthusiasts. Some paid much as a thousand dollars at auction for a bottle — $800 more than the original selling price.

Since those first barrels were shipped out, Zoeller has aged two more generations of his Jefferson's Ocean bourbon on the high seas for roughly three to four years at a time, varying their routes to more than 40 ports — as far north as Scandinavia and south to Africa's Cape of Good Hope. Each batch returns with a different flavor and color.

Zoeller now has nearly 200 barrels traversing the globe, with official tasters monitoring the aging process and flavor at various ports along the journey. But how does he ensure that crew members don't sneak their own samples?

"We've now got it locked up with cameras monitoring the barrels," he says, "but that doesn't mean they can't outsmart me!"