Accessibility links
Save The Escargot! Snail-Devouring Predator Rears Its Head In France : The Salt The New Guinea flatworm is a vicious little thing with an appetite for snails. Its discovery in Normandy has raised concerns about the fate of Europe's snails — and France's famed mollusk appetizer.

Save The Escargot! Snail-Devouring Predator Rears Its Head In France

Save The Escargot! Snail-Devouring Predator Rears Its Head In France 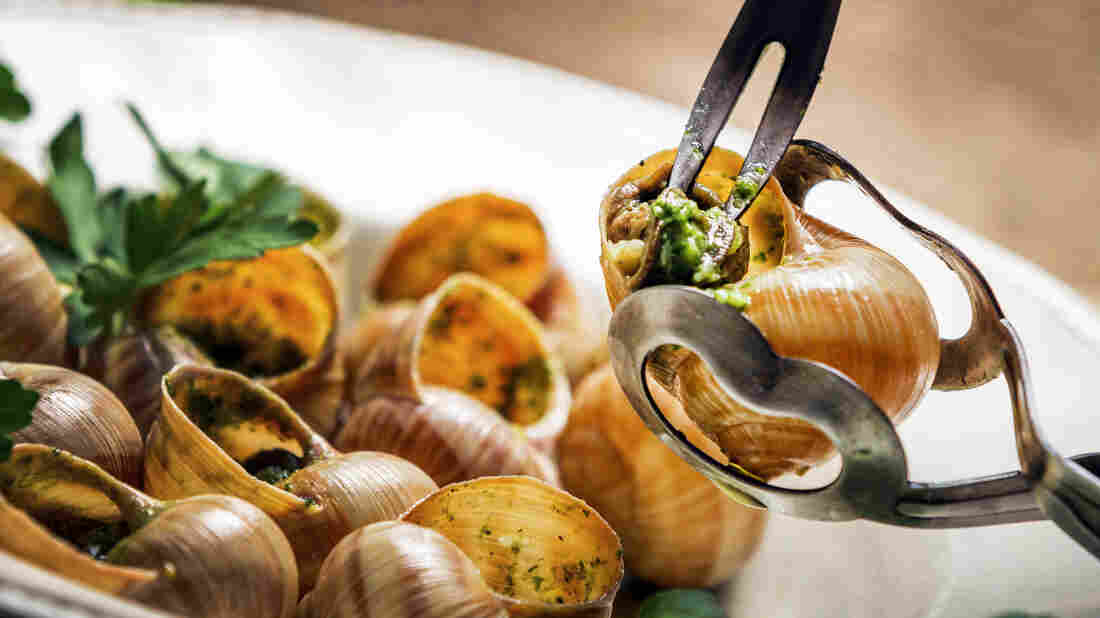 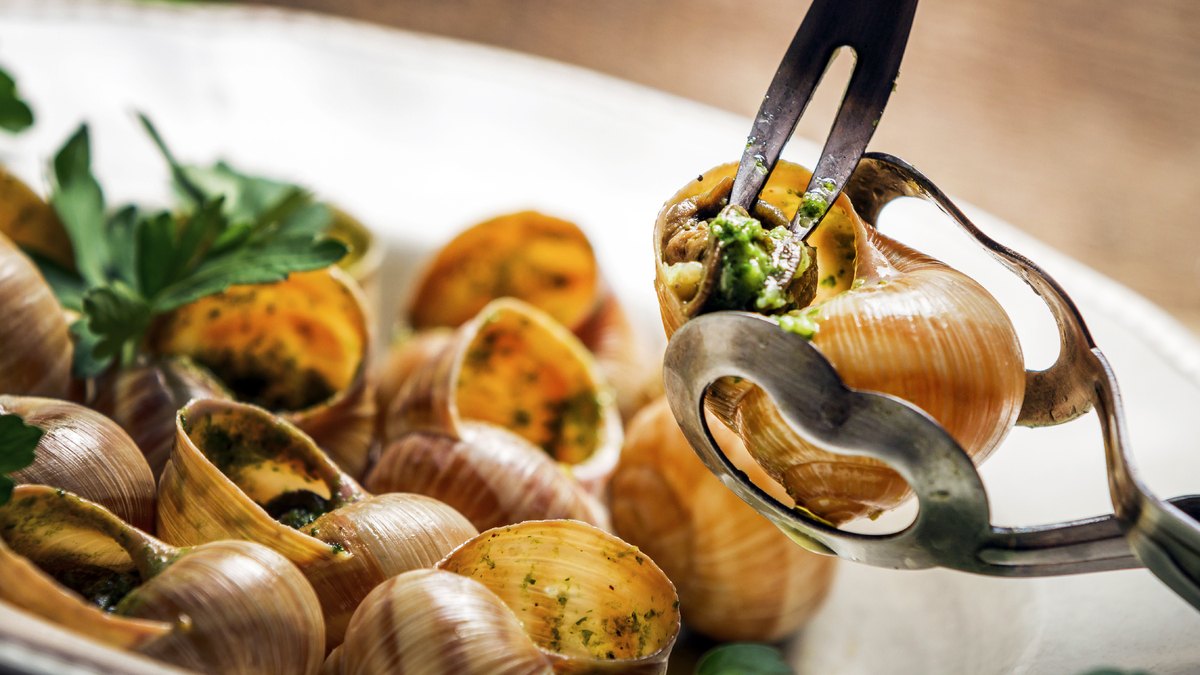 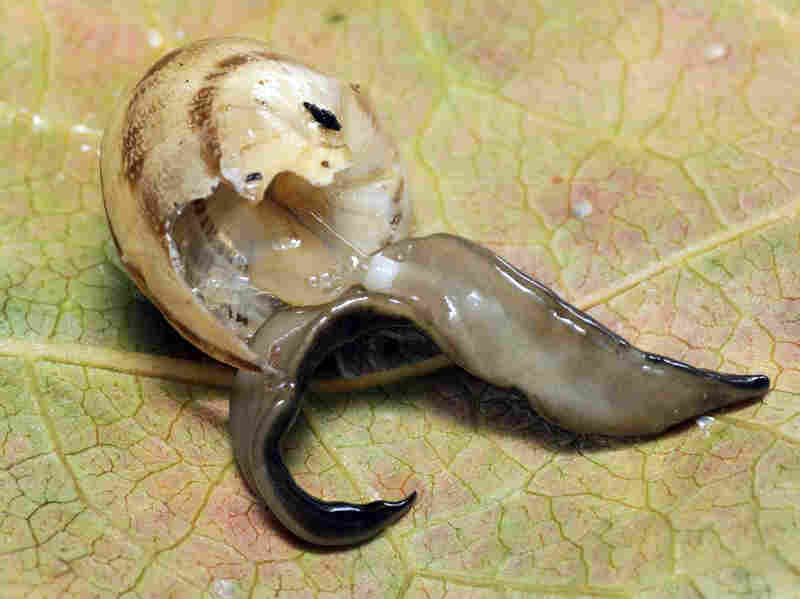 A specimen of Platydemus manokwari collected in a greenhouse at Caen in Normandy. You can see its white pharynx protruding from the underside, ingesting soft tissues of a specimen of the Mediterranean snail. Pierre Gros/PeerJ hide caption 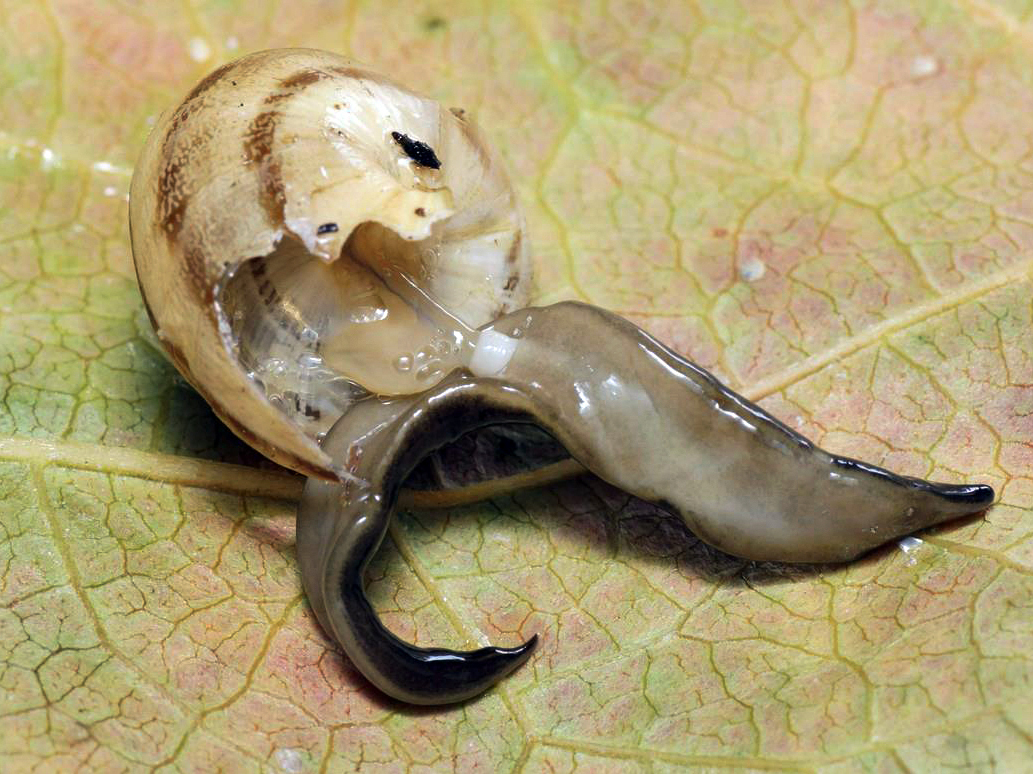 A specimen of Platydemus manokwari collected in a greenhouse at Caen in Normandy. You can see its white pharynx protruding from the underside, ingesting soft tissues of a specimen of the Mediterranean snail.

Oh, no, not the escargot!

A vicious little worm with an appetite for snails has made its European debut. And that has some scientists worried about the future of France's famed mollusk appetizer.

The New Guinea flatworm (Platydemus manokwari) is the lone worm on the Global Invasive Species Database's list of 100 of the world's most dangerous invaders. And last November, it was discovered in a greenhouse in Caen, Normandy.

A team of experts, led by Jean-Lou Justine of France's Museum of Natural History, confirmed the trespasser's identity with molecular gene analysis. Last week, the team published its findings on the worm in PeerJ, marking the first appearance of P. manokwari on European soil.

"All snails in Europe could be wiped out," Justine told Discovery News. "It may seem ironic, but it's worth pointing out the effect that this will have on French cooking."

The voracious interloper hails from the South Pacific, where it thrives on earthworms, insects — and its preferred prey, snails. In fact, P. manokwari is such an effective snail predator that it has been deliberately released into several countries in the Pacific to keep another invader, the giant African snail, under control. It's a strategy some researchers warn is dangerous, because P. manokwari will go after wanted, native snail species as well.

Dr. Leigh Winsor, an adjunct senior fellow at James Cook University and a member of the research team that identified the predator, believes that the flatworm hitched a ride to France on a plant shipped from the Pacific region.

"We've quarantined the botanic gardens in Caen where the flatworm was found, with a prohibition on importing and exporting potted plants to and from other gardens," he tells The Salt.

The news would seem to bode ill for France's snail farmers, whose practice is already dying out. These days, 90 percent of the snails found on the menus of French restaurants actually come from Poland or Romania, according to Yves Détraigne, a French senator.

"Among the 30,000 tonnes of snails consumed in our country each year, only 800 to 1,000 tonnes are produced by 250 to 300 French snail farmers, who guarantee consumers true quality in terms of taste and hygiene," Détraigne reportedly wrote in a letter to the French ministry of agriculture in 2013.

But all may not be lost for the snail farmers of France, says Robert Cowie, a research professor who studies snails and other creatures at the University of Hawaii. For one thing, he says, climate is on the farmers' side.

"The New Guinea flatworm doesn't do well in temperatures below 10 degrees Celsius [50 degrees Fahrenheit], and even in the south of France, winter temperatures drop consistently below that," he tells The Salt. "I don't see it as a major threat to France, but given the effects of global warming, the potential northward expansion of their global range is quite possible."

To date, no other P. manokwari have been sighted in France since the first cagey worm was spotted last fall. Even so, Winsor is encouraging snail farmers throughout the country to quarantine their precious escargot.