Accessibility links
Don't Fear The Fat: Experts Question Saturated Fat Guidelines : The Salt The link between heart disease and saturated fat that scientists have been drilling into us for 40 years is not as solid as many of us once thought. But don't run out and gorge on bacon just yet. 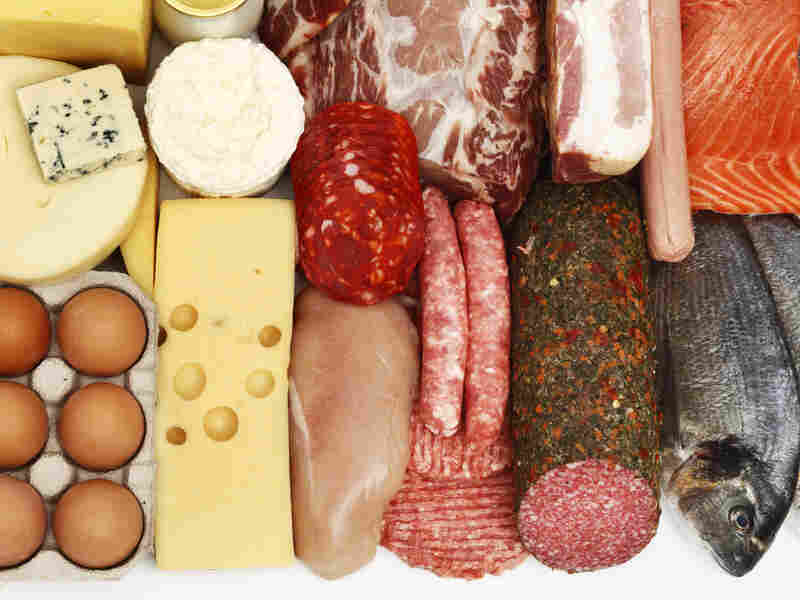 Eating some foods high in saturated fat is not necessarily going to increase your risk of heart disease, a study shows, contrary to the dietary science of the past 40 years. Cristian Baitg Schreiweis/iStockphoto hide caption 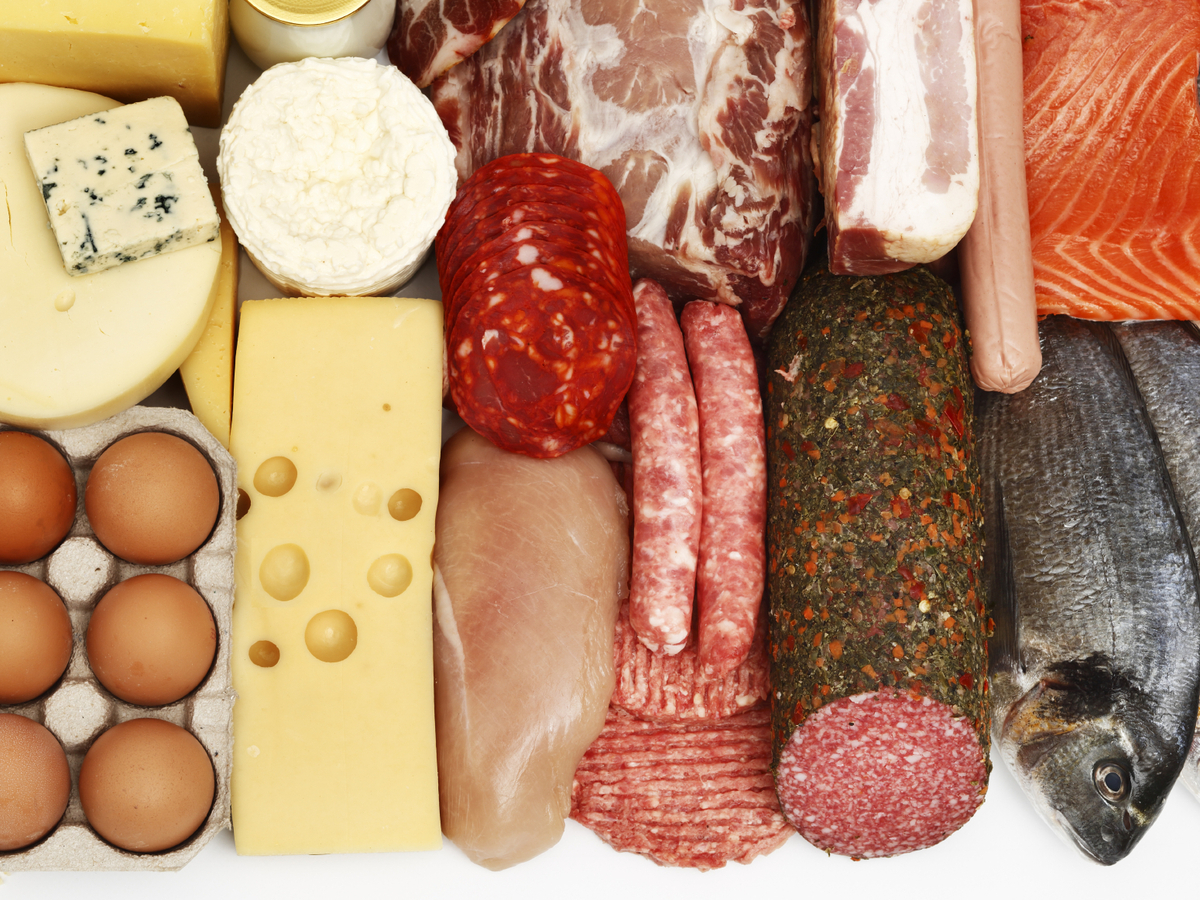 Eating some foods high in saturated fat is not necessarily going to increase your risk of heart disease, a study shows, contrary to the dietary science of the past 40 years.

As a culture, we tend to suffer from the angel-or-devil mindset. Especially when it comes to food.

And for 40 years now, saturated fat — found in high amounts in meat, cheese and other full-fat dairy products — has been one of our top nutritional demons.

The U.S. Dietary Guidelines urge us to limit consumption because of concerns that saturated fat raises the risk of heart disease. But after decades of research, a growing number of experts are questioning this link.

In fact, the authors of a new meta-analysis published in the Annals of Internal Medicine conclude that there's insufficient evidence to support the long-standing recommendation to consume saturated fat in very low amounts.

So, let's walk through this shift in thinking: The concern over fat gathered steam in the 1960s when studies showed that saturated fat increases LDL cholesterol — the bad cholesterol — the artery-clogging stuff. The assumption was that this increased the risk of heart disease.

But after all this time, it just hasn't panned out, at least not convincingly. When researchers have tracked people's saturated fat intake over time and then followed up to see whether higher intake increases the risk of heart attacks and strokes, they haven't found a clear, consistent link.

In fact, the new study finds "null associations" (to quote the authors) between total saturated fat intake and coronary risk. And a prior analysis that included more than 300,000 participants came to a similar conclusion.

So, what explains this? Well, researchers say the relationship between cholesterol and heart disease is a lot more complicated than was once understood. LDL is just one indicator of risk.

What's now thought to be a more important predictor of risk is the ratio a person has of LDL to HDL, the good cholesterol. And there's evidence that, compared with carbohydrates, saturated fat can increase HDL and lower fat deposits in the blood called triglycerides, which, in theory, would be protective against heart disease.

"So when you put this all together," says Dariush Mozaffarian of the Harvard School of Public Health, a co-author of the paper, what you see is that saturated fat has a relatively neutral effect. It's "not a beneficial effect but not a harmful effect. And I think that's what the recent studies show." 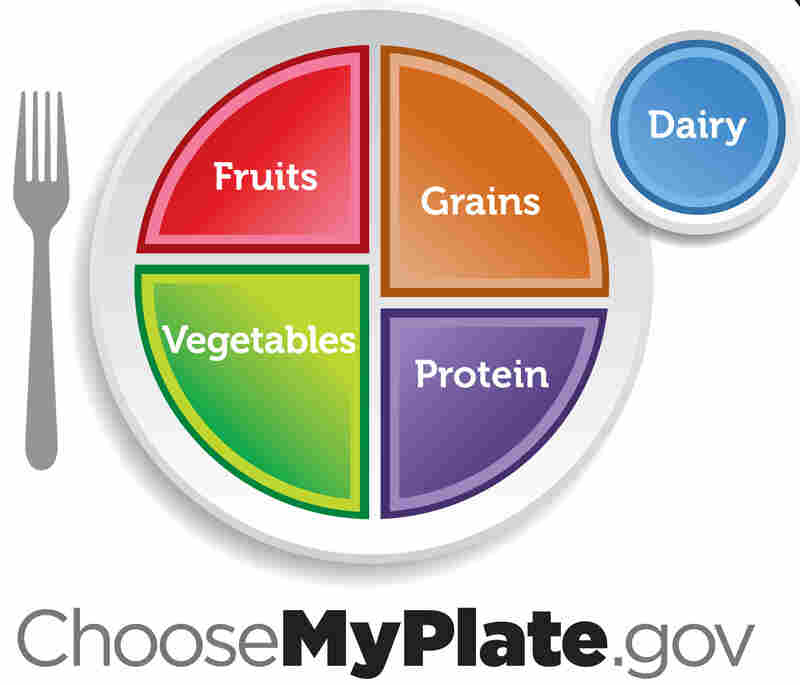 The latest study is a challenge to the U.S. dietary guidelines, which call for consuming mostly low-fat dairy and meat products. USDAgov/Flickr hide caption

So, where does this lead us? Lots of experts say the lesson here is that you can't take a reductionist approach to good health.

Look what happened when Americans reduced fat intake at the height of the fat-free boom in the early 1990s, and compensated by eating lots of carbohydrates. All of the calories from refined grains (think fat-free bagels and low-fat cookies) led lots of folks to gain weight.

"There were definitely unintended, harmful consequences of the low-fat craze," Mozaffarian says.

He says the lesson is to get away from recommendations that are built on single nutrients. A healthful diet, he says, should include a wide variety of minimally processed, whole foods such as nuts and vegetable and olive oils (which have some saturated fat), as well as fish, fruits, vegetables and small portions of animal products such as yogurt and cheese. (Surprisingly, the health-promoting Mediterranean-style diet has about 45 percent of calories from fat, including small amounts of meat.)

So, if you're still asking the question — is saturated fat good or bad? — the answer, Mozaffarian says, depends on what you're eating instead. He points to another study that found replacing saturated fats with carbohydrates has no benefits.

Now, of course, not everyone is convinced by the new studies that question the link between saturated fat and heart disease. Groups including the World Health Organization and the American Heart Association promote a low intake of saturated fat.

And vegan groups do as well. "I think there is support for removing all animal products from the diet for health purposes," says Susan Levin of the Physicians Committee for Responsible Medicine, which advocates vegan diets.

She points out that two population studies (an Adventist Health Study and a European Prospective Investigation into Cancer and Nutrition [EPIC] study) have shown that the fewer animal products you consume, the less likely you are to have diabetes or to be overweight.

Some argue that the type of fatty acids that make up the saturated fat in a food makes a difference, too. For instance, recent studies suggest that the fatty acids in milk and yogurt may be beneficial for heart health. And as we've reported, researchers are actively studying this full-fat-dairy paradox. But processed red meats, also high in saturated fat, are shown to increase the risk of heart disease and certain cancers.

So, saturated fat isn't automatically the bad guy — and shouldn't be demonized, these researchers say. It's just one part of the complex dietary puzzle.

Experts say remember this big picture: Too many calories from any source, whether it's fats or carbohydrates, can lead to weight gain. And it's that extra weight that increases the risk of heart disease.