Accessibility links
A Cold One For Everyone: Craft Beer Sales Surged In 2013 : The Salt If craft beers seem to be everywhere these days, there's good reason: Sales jumped 20 percent in 2013. To stand out in an increasingly crowded field, many brewers are pushing the flavor frontiers.

A Cold One For Everyone: Craft Beer Sales Surged In 2013

A Cold One For Everyone: Craft Beer Sales Surged In 2013 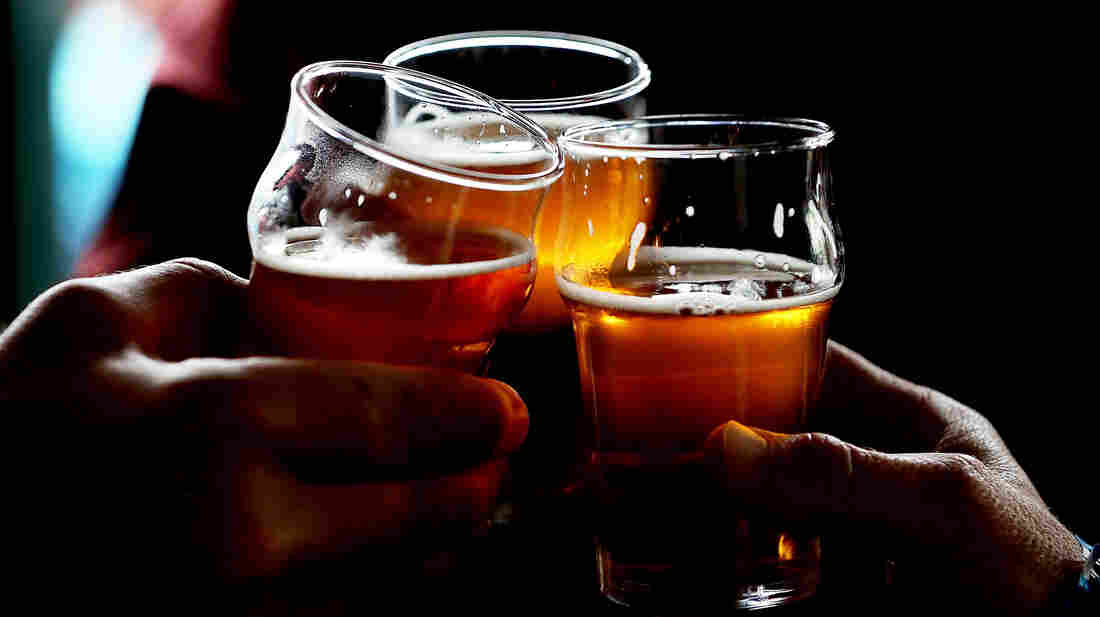 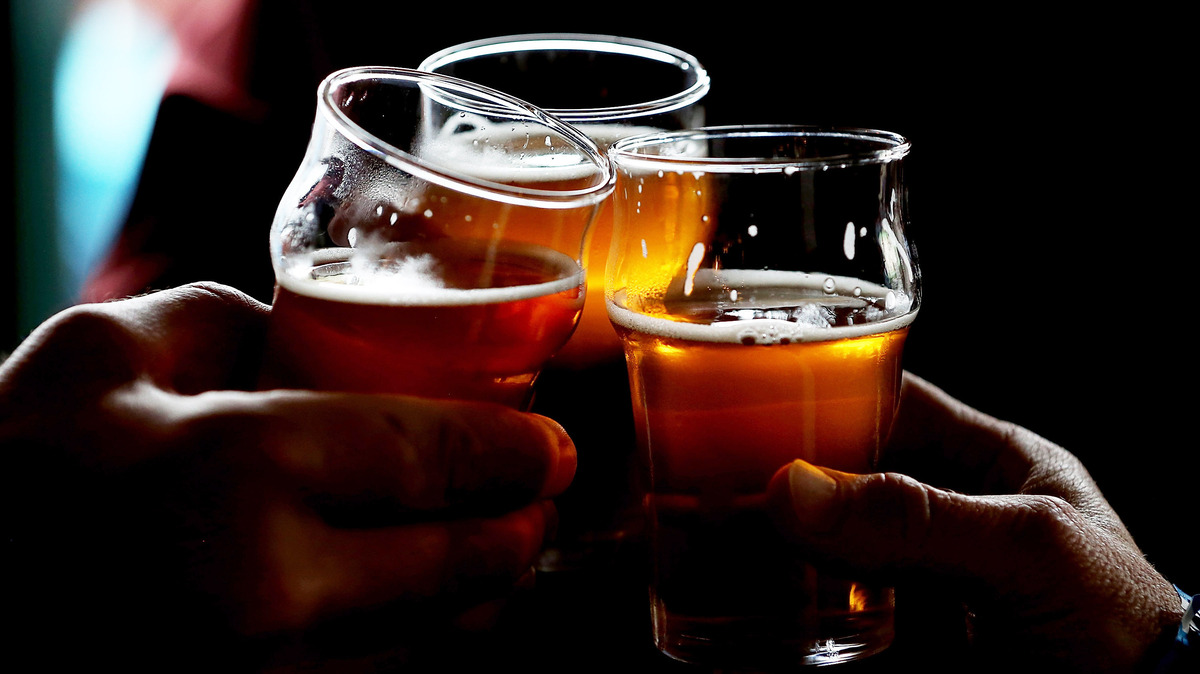 If you think craft beer is seemingly everywhere these days, there's good reason. From bars and restaurants to supermarket aisles, the selection of locally made, often quirkily named brews has grown at an exponential rate.

It may be tempting to mock those bearded hipsters who brew their IPAs with chamomile and white sage or age their lagers in 30-year-old whiskey barrels. But it looks like they're having the last laugh: Craft beer sales jumped 20 percent last year and now make up nearly 8 percent of all beer sales in America, according to new numbers from the Brewers Association, an industry trade group.

"With this stellar year, craft has now averaged 10.9 percent growth over the last decade," says Bart Watson, staff economist at the association. "Beer drinkers are excited about what small and independent brewers are offering, and that is evidenced by the rising production and sales of the craft segment."

And craft breweries are quickly multiplying, too: There were 2,768 of them operating in the United States last year, up from around 2,300 in 2012, according to the association. (A history of craft brewing on the group's site points out that there were only eight craft breweries in the U.S. in 1980 and 537 in 1994.) 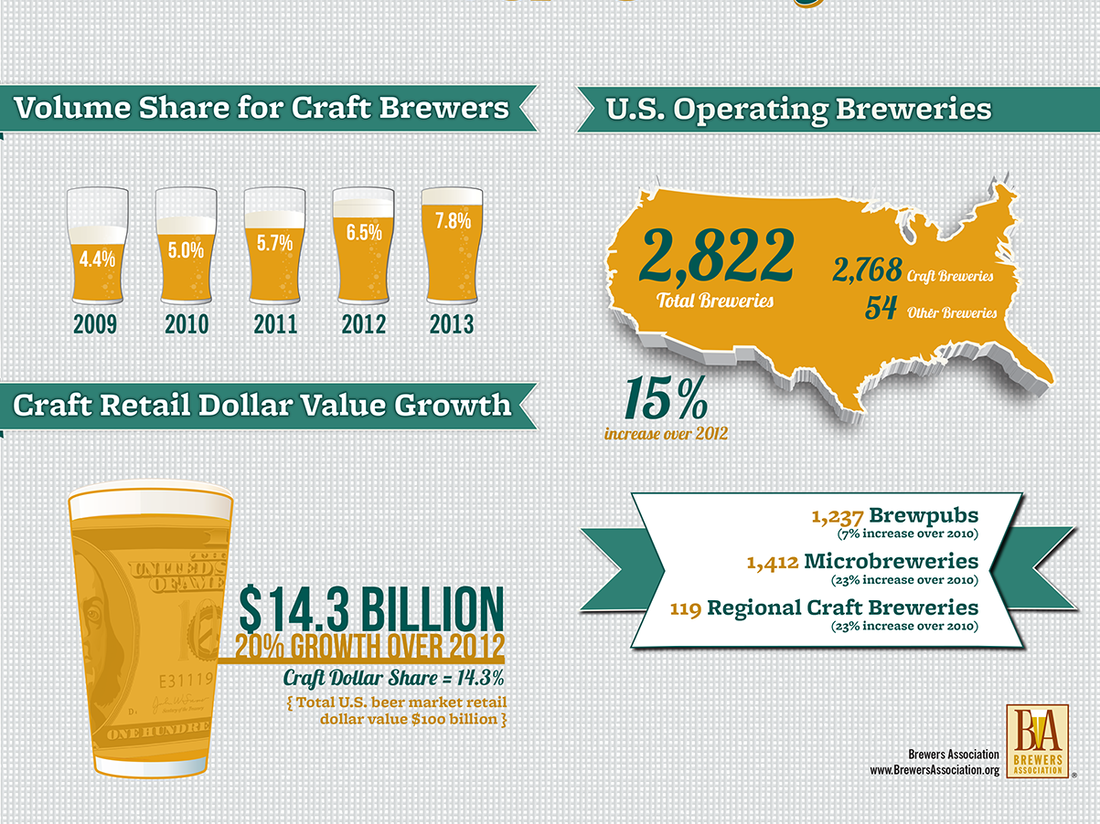 Courtesy of the Brewers Association

To be deemed a "craft" brewery by the association, a facility must be "small, independent, and traditional":

"With craft beer, said contents are more flavorful, aromatic, enjoyable and as complex or simple as one would like," Simpson tells The Salt. "Craft beer is a no-brainer, for anyone who truly loves beer."

Though craft brews may still be the David to Bud's Goliath in terms of overall sales, the number of craft options continues to grow, adding diversity of flavor to the beer market, which is part of the appeal.

These days, there's a craft beer for practically every palate — and price range. For example, there's "Dave," the 19-year-old barleywine that sells for $2,000 in Portland. Some craft beers cater to the gluten-free crowd, while others emphasize their "taste of place" by incorporating local seeds, leaves, roots, fruits and fungi in their recipes.

Indeed, to stand out in an increasingly crowded field, many craft brewers are redefining the frontiers of beer flavor. Witness the rise of sour beers, which offer a tart, crisp taste. And then there are beer-wine mashups that combine two of mankind's oldest beverages.

So who's winning the craft beer flavor wars? We'll get a better sense later this month, when the Brewers Association will release the list of the top-selling craft brewing companies in the country.