Accessibility links
Why 500 Million U.S. Seafood Meals Get Dumped In The Sea : The Salt Nine American fisheries together throw overboard as much as 340 million pounds of fish and other species they were not trying to catch, a report finds. Much of it is perfectly edible fish. 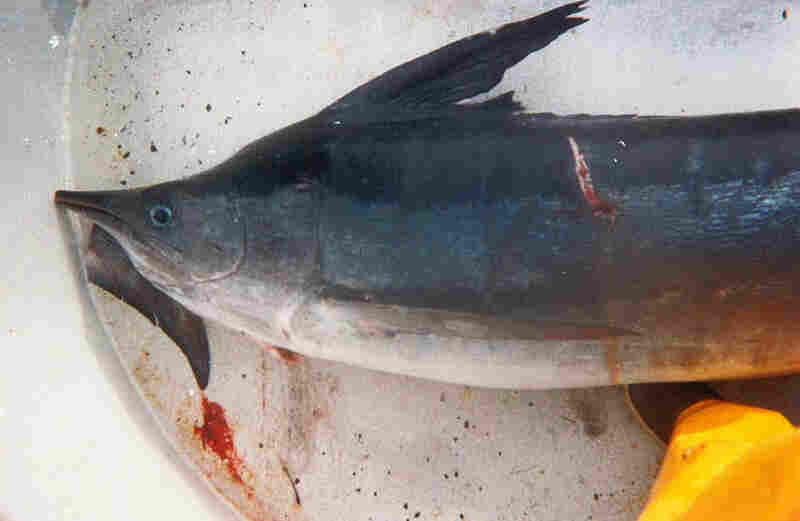 A marlin caught as bycatch by the California drift gillnet fishery. The conservation group Oceana called the fishery one of the "dirtiest" in the U.S. because of its high rate of discarded fish and other marine animals. Courtesy of NOAA hide caption 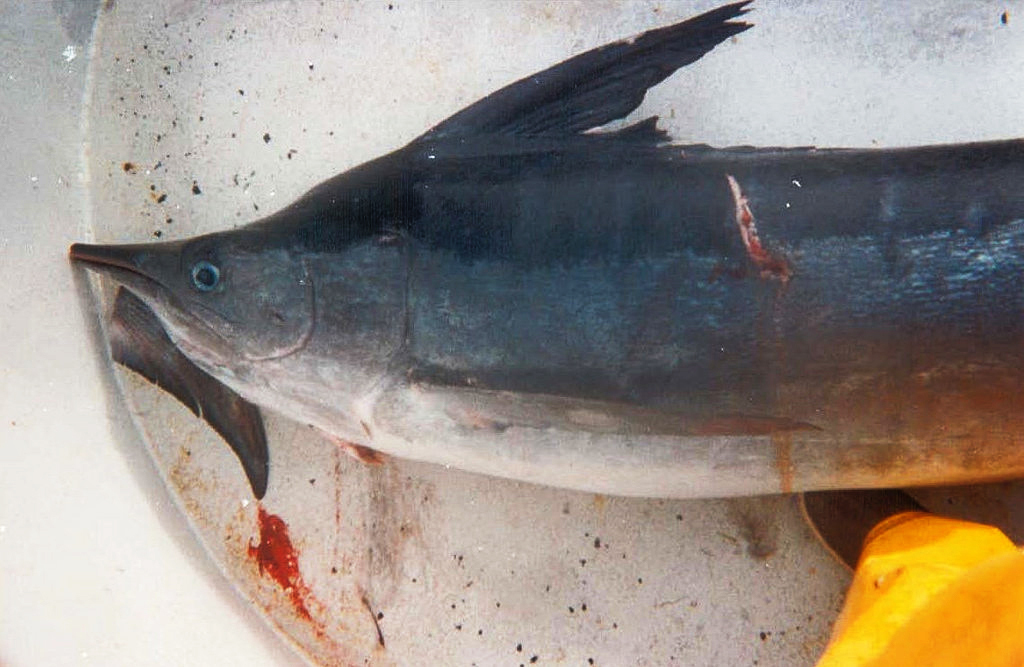 A marlin caught as bycatch by the California drift gillnet fishery. The conservation group Oceana called the fishery one of the "dirtiest" in the U.S. because of its high rate of discarded fish and other marine animals.

Seafood often travels huge distances over many days to reach the people who eat it. And it's often impossible to know where a fillet of fish or a few frozen shrimp came from — and, perhaps more importantly, just how they were caught.

Fortunately, activists are doing the homework for us, and what they're telling us could make your next fish dinner a little less tasty.

According to a report released Thursday by the environmental group Oceana, commercial fishermen in the U.S. annually throw overboard as much as 2 billion pounds of so-called bycatch, much of which is edible fish equivalent to at least a half-billion seafood meals. Incredibly, much of this waste includes some of the most valuable — and delectable — seafood species in the world, like bluefin tuna, swordfish and Pacific halibut.

The report, compiled from data from the National Marine Fisheries Service, a federal agency, singles out the nine most wasteful fisheries in the U.S., who were responsible for 340 million pounds of bycatch in 2011. The "dirtiest" fisheries include the Gulf of Mexico shrimp trawling industry; the California set gillnet fishery, which targets halibut and white sea bass; and the longline fishery for red snapper and grouper. Gillnetted Pacific swordfish, Atlantic swordfish caught on longlines, and cod, haddock, monkfish and flounder caught by North Atlantic trawlers also come from fisheries on the list.

The reason these fisheries are throwing away so many fish? It's mainly the types of commercial gear they're using, which are designed to catch as many fish as possible, says Oceana.

And if you've eaten U.S. shrimp, halibut or red snapper, there's a good chance it has come from one of these fisheries. Their fish and shrimp are sold in markets and restaurants across the U.S. and around the world, according to Gib Brogan, the fisheries campaign manager with Oceana.

"It's being sold all over the place," he says.

Brogan says fishing regulations are partly to blame for wasted seafood. That's because fishermen who have permits to catch certain species must throw back other valuable species they accidentally catch — even if the fish are dead.

For example, trawling vessels in Alaska — boats that drag giant nets behind them to catch flounder and sole — threw back 2 million pounds of Pacific halibut and 5 million pounds of Pacific cod in a single year, according to Oceana's report. Brogan says a lot, if not most, of the bycatch caught with trawl nets, gillnets and longlines is dead or dying by the time it's returned to the water. 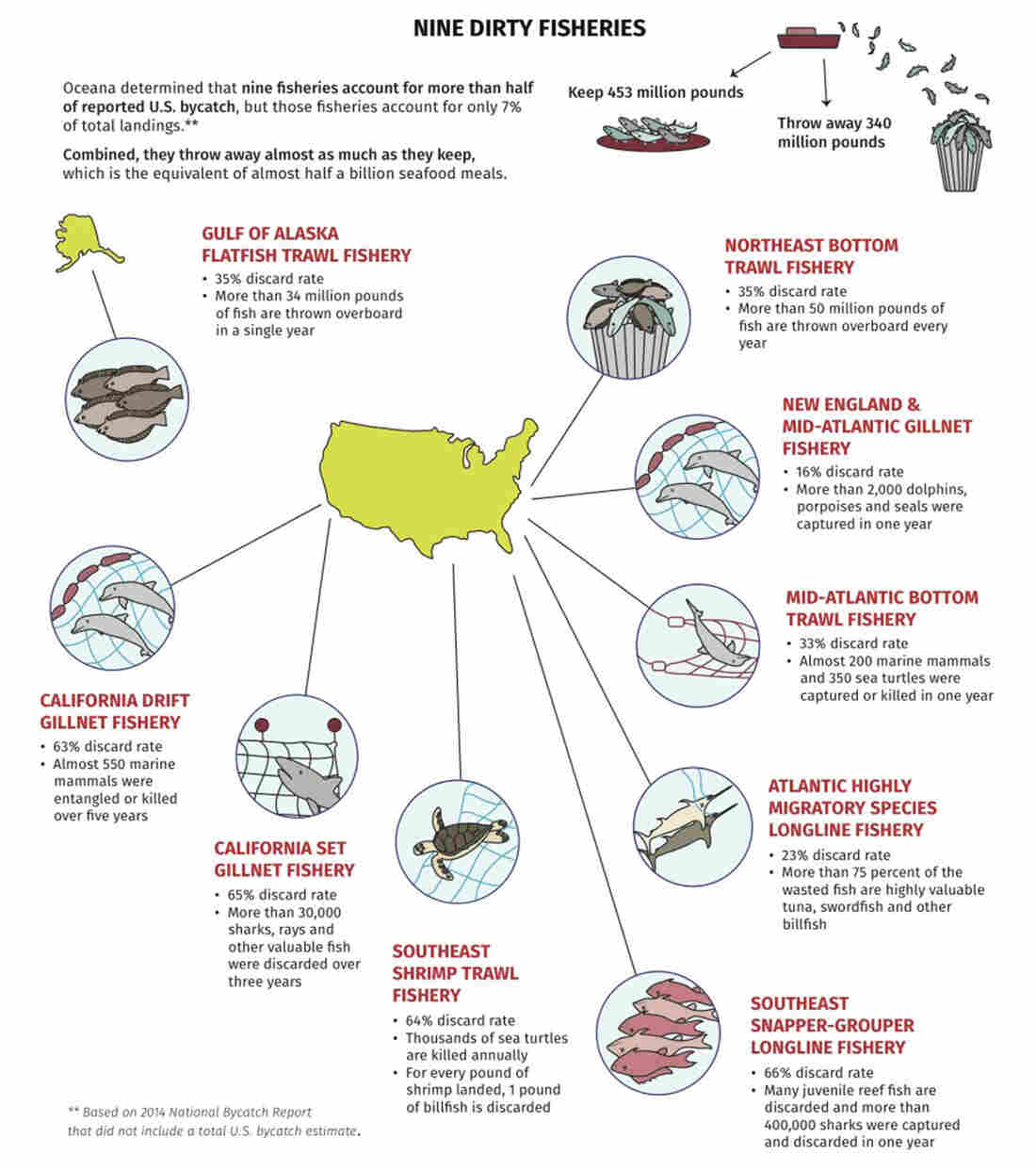 Nine fisheries account for more than half of the reported U.S. bycatch. Courtesy of Oceana hide caption 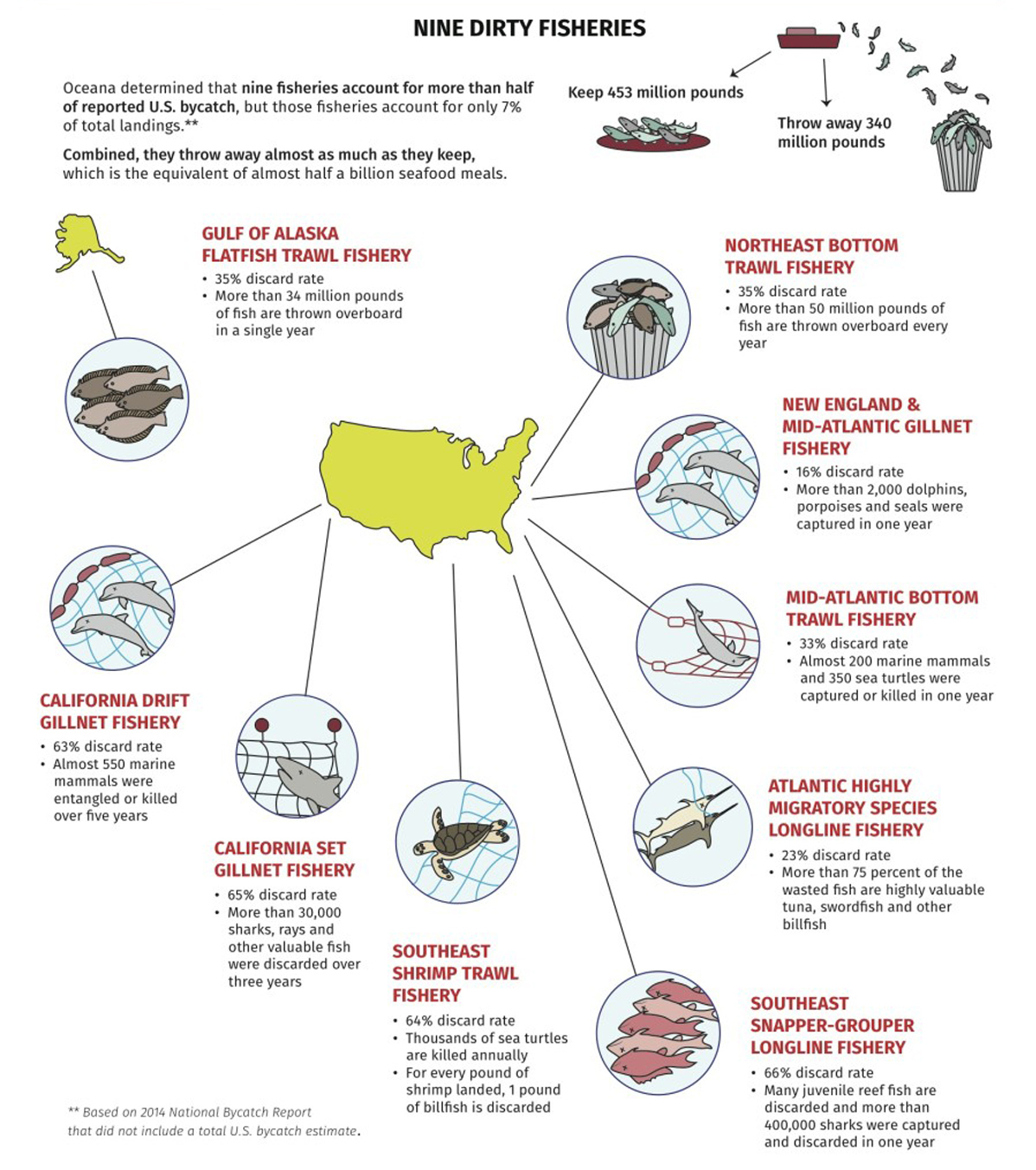 Nine fisheries account for more than half of the reported U.S. bycatch.

The Gulf of Mexico shrimp trawling industry throws back about two-thirds, by weight, of its total catch, the report says. So do swordfish gillnetters in offshore California waters and those fishing closer to shore for halibut and white sea bass. Sea turtles, seabirds and various marine mammals are also among the detritus. Longline snapper and grouper fishermen in the Gulf of Mexico, for example, threw back 400,000 sharks in 2010.

Such information is critical for fishery managers and environmentalists who advocate for catching seafood with more sustainable fishing gear. But unless you study the fishing industry for a living, it's tough for a consumer to avoid these fisheries when shopping for seafood. Nonetheless, groups like Oceana, the Natural Resources Defense Council and the Monterey Bay Aquarium have been trying to educate consumers about the bycatch issue through seafood buying guides and other campaigns.

"As a concept, people get what bycatch is and they don't like it," says Sheila Bowman, with the Monterey Bay Aquarium's Seafood Watch. "But the data is often too hard for shoppers to put into context and act on."

According to Whole Foods Markets, the high-end retailer, 59 percent of its shoppers surveyed in 2013 said they believed how a fish is caught is important. The company has pledged to sell seafood that's as sustainable as possible.

"But most people don't even know what 'gear type' means," says Margaret Wittenberg, vice president of quality standards at Whole Foods Markets. "They care about sustainability, and they want to make a good choice, and they know that we've done the homework for them."

Just as consumers and retailers are starting to understand the severity of bycatch issues, some fishermen also seem to be taking it more seriously. In the Gulf of Mexico, a group of several dozen fishermen catching snapper and grouper have begun using weaker hooks on their longlines that break or bend when large sharks and other potential bycatch species take a bait.

He says the fishermen he represents have made efforts to create demand for lower-value species, like the lane snapper, silk snapper and at least two species of porgy — fish that often get tossed back dead. "Our goal is to have a zero-discard fishery by creating markets for these species," says Brazer.

Tj Tate, with Gulf Wild, a sustainability program that marks seafood with detailed place-of-origin tags, says many fishermen are seeing financial incentive to change their practices and reduce their bycatch.

"It's not effective for fishermen to be spending time handling and trying to release sharks or undersized fish that they can't sell," she says. "They're losing fishing time."

Bowman at Seafood Watch says she supports the efforts of groups like Oceana to inform consumers about wasteful fishing industries. But she notes that in the crusade to curb wasteful fishing practices, less information might sometimes be more.