Accessibility links
Can You Open A Bottle Of Wine With A Shoe? Yes, But It Ain't Pretty : The Salt A YouTube video makes it look so easy: Nine swift strikes against a wall and voila! Your cabernet is ready for pouring. We weren't as successful. But we did figure out the physics behind the trick.

There's a rumor swirling around on the Internet: If you have a bottle of wine, but no corkscrew with which to open it, then a shoe will do the trick nicely.

Well, this French guy from Mirabeau Wine sure makes it look easy. Just nine swift strikes against the stone wall with a man's dress shoe, and voila! The cork slips right out.

Nine swift strikes against the wall and voila! The cork pops right out of the bottle. But does this parlor trick work with the newfangled plastic corks?

But does this parlor trick work with just any shoe — say, even 3-inch heels? And if so, what's the physics behind the cork-popping action?

We decided to try it out here at The Salt, which is, after all, a part of NPR's Science Desk. And we can say, without a doubt, opening up wine with a shoe does indeed work — but it sure isn't easy. (My arms and stomach muscles were sore for days after banging a bottle of cabernet sauvignon against the wall for 10 to 15 minutes.)

And if your wine has one those newfangled plastic corks, then you're out of luck. Those suckers wouldn't budge a millimeter, no matter how hard we pounded the bottle against the wall.

So what pushes the cork out?

"It's actually quite simple," says James Wallace, an engineer at the University of Maryland, who studies fluid dynamics. 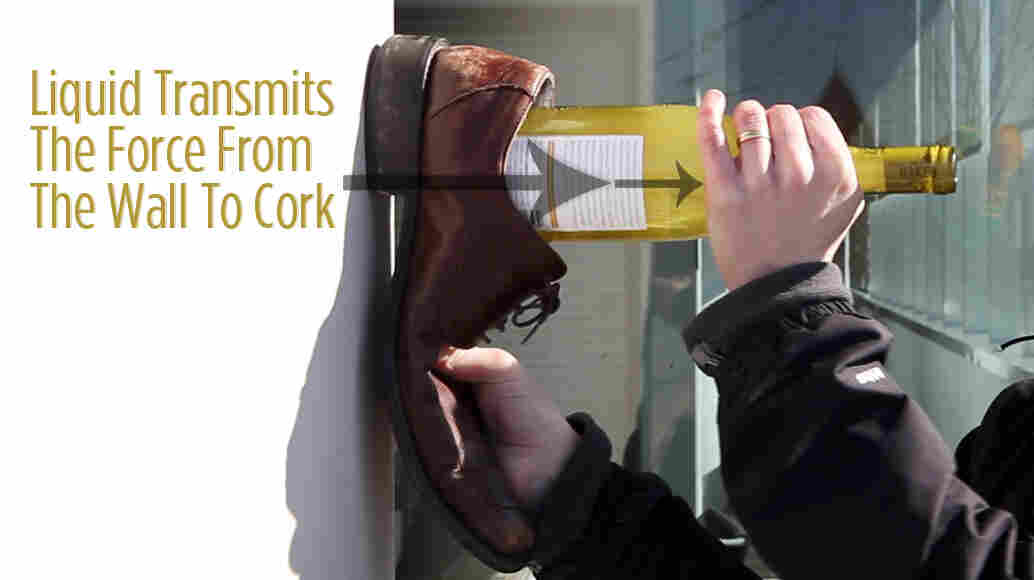 Vino physics: In essence, popping the cork out with a shoe all boils down to how the three phases of matter behave. Liquids like wine act a lot like solids when they're confined. The molecules are close together and rapidly transmit forces from the bottle's bottom to its cork. Meg Vogel/NPR hide caption 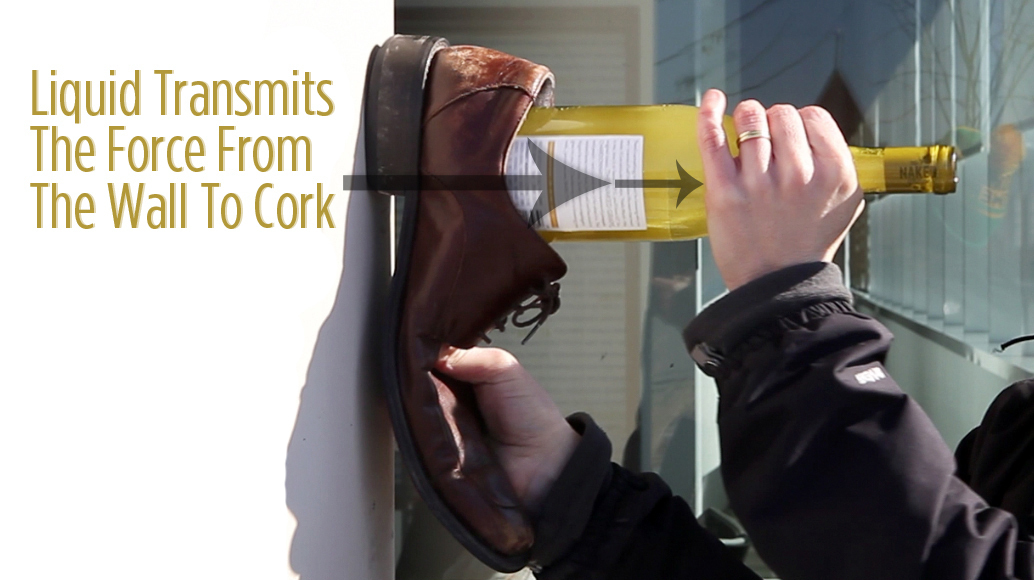 Vino physics: In essence, popping the cork out with a shoe all boils down to how the three phases of matter behave. Liquids like wine act a lot like solids when they're confined. The molecules are close together and rapidly transmit forces from the bottle's bottom to its cork.

"When you hit the bottle against the shoe, the impact of the [shoe against the] wall provides a more or less constant force to the bottle, which is then transmitted to the liquid."

As it turns out, wine is actually a rather good transmitter of force, kind of like a piston.

"The force moves very rapidly down the liquid, just as it would in a solid," Wallace says. "When a liquid is confined, like the wine in the bottle, it can't flow. So the wine is going to act very much like a solid." And those wine molecules are going to transfer that force all way to the cork, making it pop out.

But you can't just grab any boot, sneaker or loafer to open the bottle.

Shoes with soles that are too cushioned, like running shoes, don't work at all, Wallace says: "A running shoe is made with some kind of compressible material that can deform. So the force of the wall is being absorbed by the sole. Some of the force moves out to the side. The force is not very concentrated."

Beer-Tapping Physics: Why A Hit To A Bottle Makes A Foam Volcano

Not surprisingly, the pointy 3-inch heel didn't work so well, either. But it's not because the heel is too tall, says Wallace, but rather, the angle of the sole is probably all wrong.

You see, for the maximum force to transfer to the wine, the bottle needs to be perfectly perpendicular to the wall. If the bottle tilts at all, then some of the force from the wall doesn't get transmitted to the bottle, Wallace says.

In fact, Wallace says you probably don't need a shoe at all to get that bottle open.

"I'd imagine it would work even better if you just hit the bottle against the wall directly," he says. "The bottle is rigid, and the wall is rigid. So there would be very little compression of either material. The energy of the strike would be intensely transmitted into both surfaces."

Of course, with that strategy, you run the risk of breaking the bottle, Wallace says. "The problem is that, without the shoe, you don't know how hard to hit the wall. The sole helps to absorb some of the energy, so you can intuitively calibrate how hard to hit it."

So it may take longer with the shoe to pour your well-earned glass of cabernet. But at least you'll get to drink it instead of wear it.

Editor's Note: Opening wine with this trick comes with some risk. Although we didn't break any bottles during hours of experimentation, broken glass is a serious danger here. So if you decide to try this (and we're not saying you should), please be careful, especially if you're imbibing. Several commenters below tell us they've tried this technique in the past and suffered injuries as a result.