Accessibility links
The Search For The Perfect Cup Of Coffee Can Be Such A Grind(er) : The Salt It's the holy grail of the coffee world: a grinder that optimizes flavor from every bean. An Idaho couple has spent years perfecting a hand-cranked machine that's as good as much pricier models. 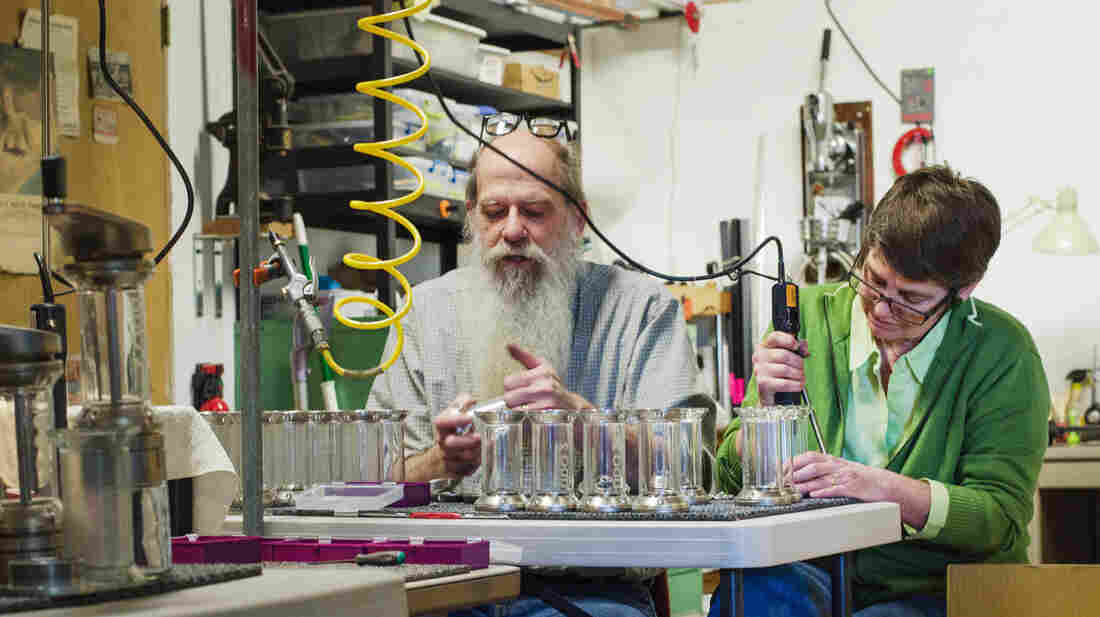 Doug and Barb Garrott assemble a Lido 2 grinder at their home in Troy, Idaho. They've spent the past three years perfecting their design for the hand-cranked machine. Jessica Greene hide caption 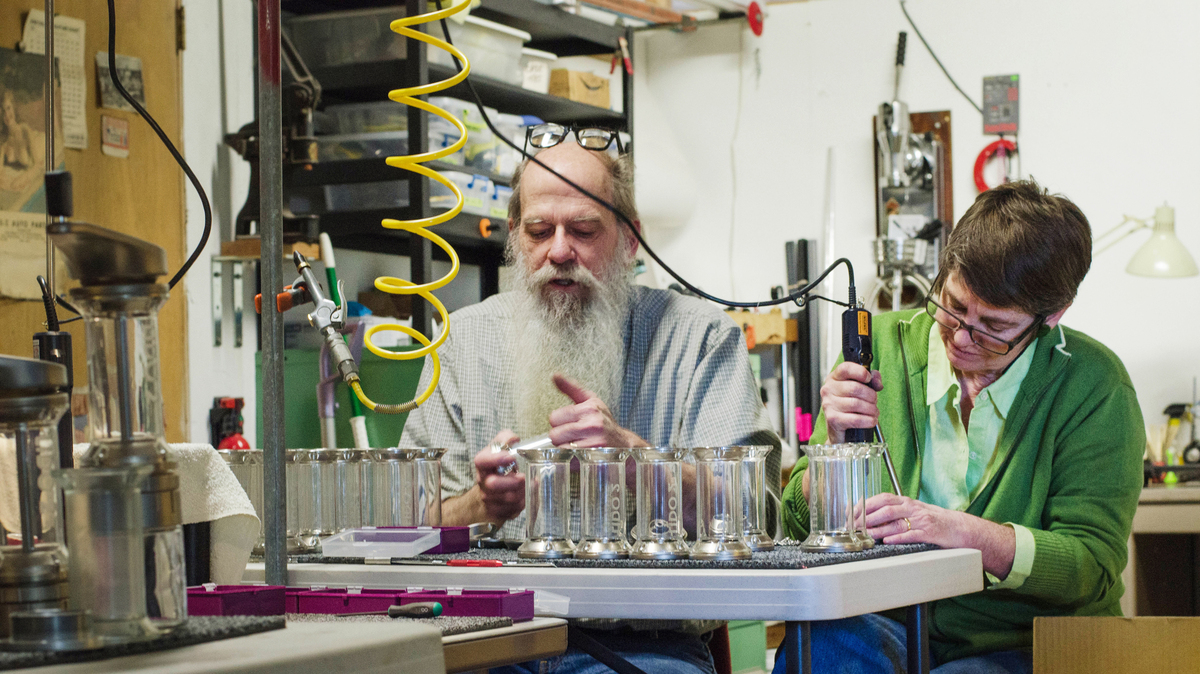 Doug and Barb Garrott assemble a Lido 2 grinder at their home in Troy, Idaho. They've spent the past three years perfecting their design for the hand-cranked machine.

In the tiny town of Troy, Idaho, Barb and Doug Garrott have spent the past three years perfecting a machine that could change the morning routines of coffee drinkers all over the country: a $175 hand-cranked coffee grinder.

It's called the Lido 2, the first run of 500 has already sold out on preorder, and coffee aficionados are asking for more.

Before you spit that cup of coffee all over your screen, consider this: Single cups of pour-over coffee, brewed with nothing but hot water and a paper filter, are replacing shots of espresso as the gold standard of the gourmet coffee world.

People in pursuit of the perfect cup of Joe no longer need to spend thousands of dollars on an espresso machine to brew like a pro. That shift has given rise to a new wave of high-end home coffee lovers (and a wave of articles on the seemingly simple art of making a cup of regular coffee).

But even if good coffee is more accessible than ever, it's not quite as easy as getting good beans, a $10 drip cone and practicing your hot water pour. Without a good grinder to chop those single-origin beans into a consistent size, you might as well be brewing with your grandma's percolator. 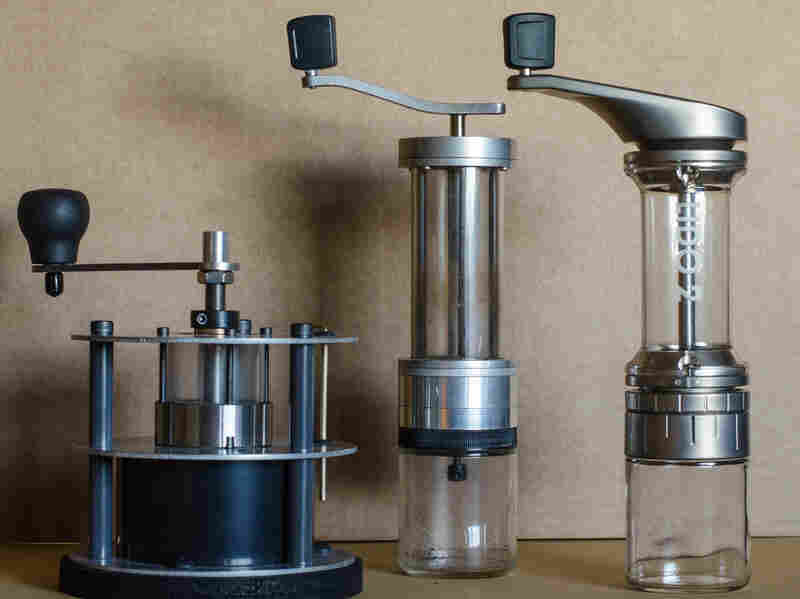 The Lido 2 (far right) is the latest hand grinder produced by the Garrotts. Their previous efforts were the well-regarded Pharos (left) and Lido 1 (center). Jessica Greene hide caption 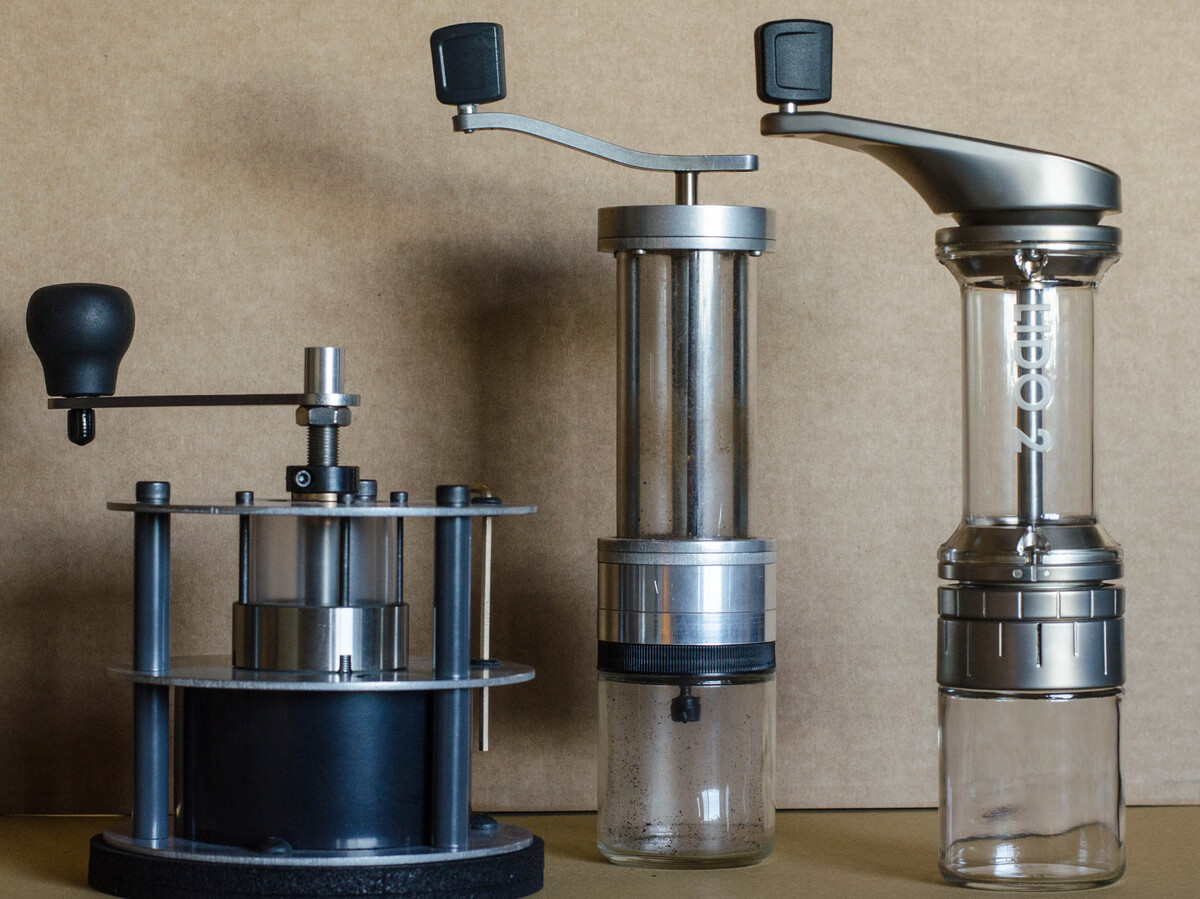 The Lido 2 (far right) is the latest hand grinder produced by the Garrotts. Their previous efforts were the well-regarded Pharos (left) and Lido 1 (center).

Ask anyone in the coffee industry, and they'll tell you: The grinder is the unsung hero of the coffee process. Benjamin Brewer, Blue Bottle Coffee's director of quality control, says the switch from a "crummy" grinder to a more competent machine "totally makes a difference. It's like, oh, we can actually taste the coffee now!"

Making coffee is all about dissolving some of the roasted beans' flavor compounds — including the slightly bitter tang of caffeine — into hot water. Every brewing method is designed to pull out just the right amount. For espresso, that extraction happens when hot water passes through tightly packed, superfine grounds for just a few moments; for French press, when water steeps in coarse-ground beans for a few minutes.

But all of that depends on the coffee grounds being as close to uniform in size as possible. Once you introduce too many big chunks (known as "boulders" in grinder parlance) or tiny microparticles (dubbed "fines"), the extraction gets all out of whack.

The fines give up their flavor too fast, making for a bitter brew, and the boulders hardly give up anything at all, leaving your cup thin and sour. It's the same problem that occurs whenever you cook widely varying chunks of anything all together — potatoes in a pot of boiling water, for instance. The result will come out either cooked to oblivion or underdone.

The whirling blade grinder that most people have at home just doesn't cut it. The blade smashes coffee to smithereens, making boulders and fines all over the place. Instead, the coffee pros use burr grinders, which chew the beans up to a precise, consistent size by funneling them through a set of steel or ceramic teeth.

In other words, a good grinder can make all the difference between a cup of sludge and a rich, aromatic morning mug of Joe.

Which is exactly why the Garrotts set out to make an ideal hand grinder three years ago. "It started out as a winter project to stave off the boredom," Barb says.

She and Doug had been running a business called Orphan Espresso, selling repair parts for vintage espresso machines and old-timey wood-box coffee grinders. They'd found themselves disappointed with most of the hand grinders on the market, vintage and new. So, they figured, they might as well make one themselves.

Since their first machine debuted in 2011, they've sold over 1,500 grinders, mostly to the self-selecting coffee obsessives on forums like Home Barista and CoffeeGeek. Each one was painstakingly put together by hand in the workshop next to their house. Now, with the Lido 2, they've gone through the hoops to mass manufacture their parts in Taiwan, but are still assembling their first run of 500 at home.

The $175 price tag comes from using professional-grade parts, cast metal construction and lots of attention to detail. They also added adjustment mechanisms to stop the teeth from wobbling while crushing up beans. That means the grind is more regular, and more consistent, than many of the hand grinders on the market.

But why make, or buy, a hand grinder at all?

Simply put, they deliver the same quality as motorized machines at a fraction of the cost. There are other hand grinders that are even cheaper than the Lido 2, such as the Hario Slim ($50) and Porlex Mini ($70). But die-hard coffee lovers contend that with sub-$100 models, you'll have problems with inconsistent grinds.

Joshua Viau, a regular Home Barista contributor, says the appeal of the Lido 2 and other serious hand grinders goes beyond mechanics.

"You taste differences in the cup, but it's more than that. These feel like tools, like something that lasts." Grinding every morning, he says, "you form a bond with it."

An earlier version of this story stated that the price of the Porlex Mini grinder is $7. The actual price is $70.