Accessibility links
Why We Got Fatter During The Fat-Free Food Boom : The Salt In the 1970s, the U.S. Dietary Goals advised Americans to cut back on fat and eat more carbs to lower the risk of heart disease. But some experts say this high-carb, low-fat diet helped fuel obesity.

If you want to trace Americans' fear of fat, the place to start is the U.S. Senate, during the steamy days of July 1976.

That's when Sen. George McGovern called a hearing to raise attention to the links between diet and disease.

And what was the urgency? The economy was booming, and many Americans were living high on the hog. A 1954 Capitol Hill restaurant menu offers a glimpse of what lunch looked like then: steak with claret sauce, buttered succotash and pineapple cheesecake. But soon, that prosperity began to cast a dark shadow within the halls of Congress. 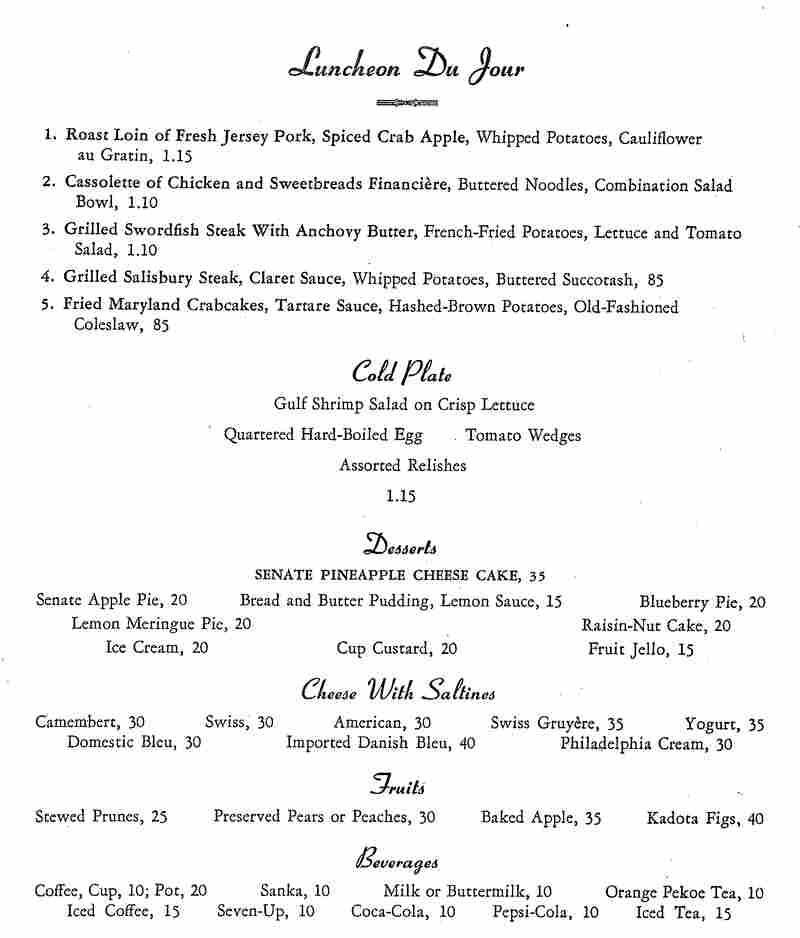 A 1954 menu from a Capitol Hill restaurant Courtesy of U.S. Senate hide caption 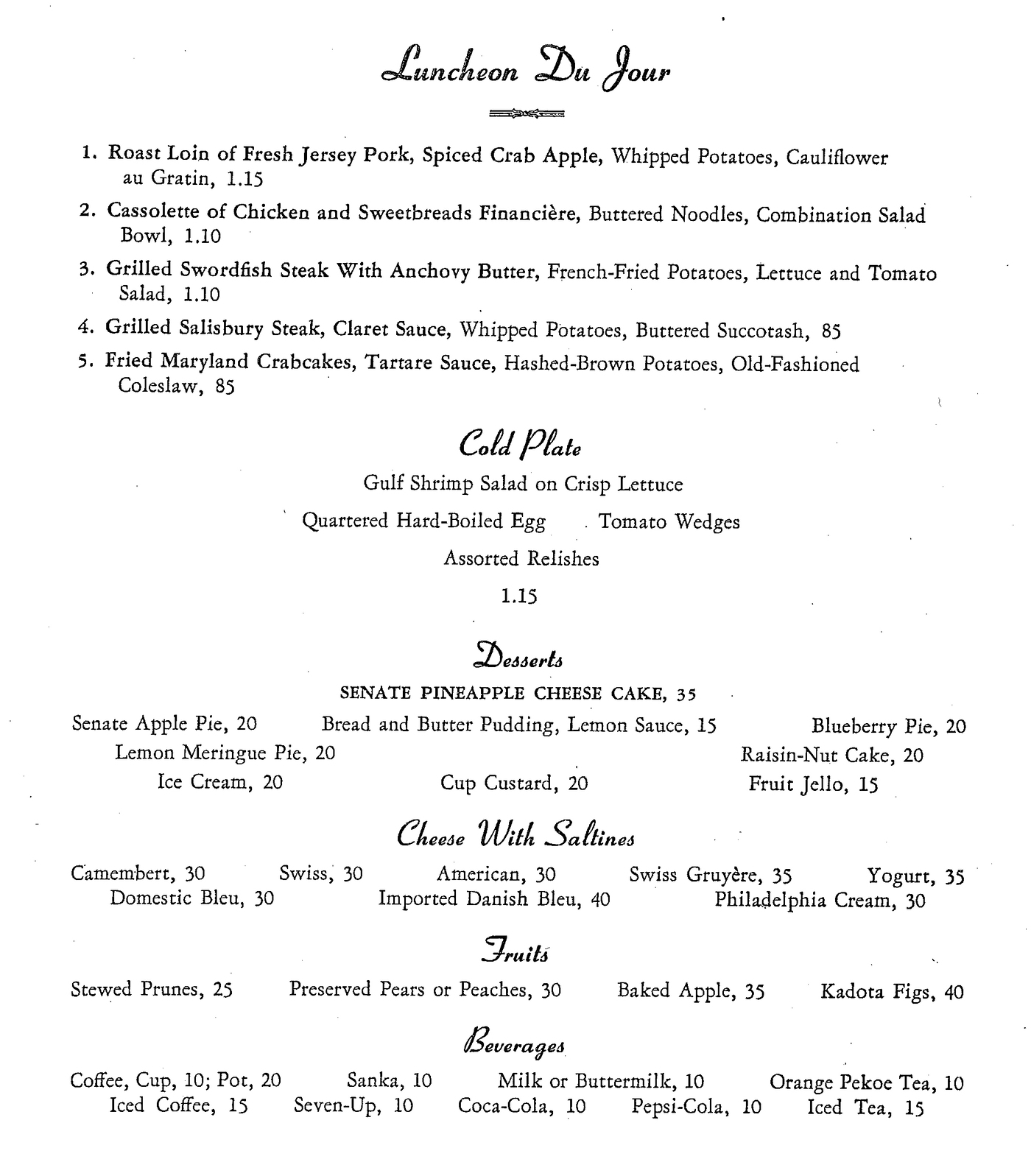 A 1954 menu from a Capitol Hill restaurant

"If you look at the statistics, members were dying at a rather large rate," Senate historian Don Ritchie tells us.

And there was a hint that the American diet might be to blame.

This was an era when it was not uncommon for men to drop dead of heart attacks. By our count, eight U.S. Senators died in office of heart disease during the 1960s and 1970s.

"When you have colleagues who die prematurely," says Ritchie, "that's sort of a wake-up call."

The harms of smoking were already on the radar. The new concern was the connection between diet and heart disease.

Scientists had evidence that foods with saturated fat such as eggs and meat could raise LDL cholesterol. But there were a lot of complexities that scientists didn't yet understand, and not a lot of data.

So, when Sen. McGovern, a Democrat from South Dakota, called his hearing, he summoned the likes of Nathan Pritikin, a longevity guru who believed you could reverse heart disease with diet changes. And he called as a witness a Harvard University professor who pointed to the harms of overconsumption of fat.

The hearing led to the creation of the first set of dietary guidelines for Americans.

"The thinking of the day is that you wanted to reduce fat," says science writer Gary Taubes, author of Why We Get Fat.

He adds that once fat was fingered as the villain, the thinking was that any way Americans could get fat out of their diets would be a good thing. 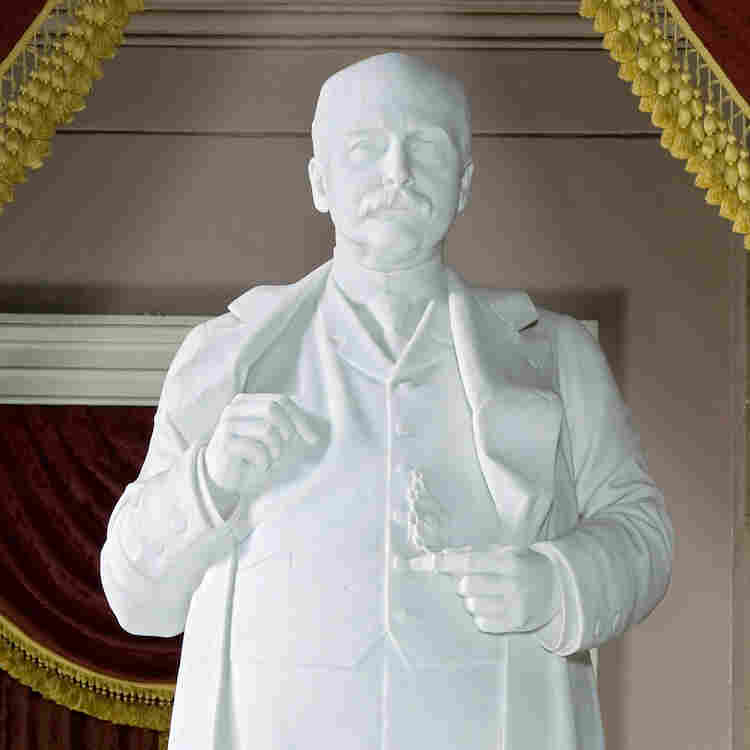 Sen. George Shoup, who died in 1904, was Idaho's first governor. "He protrudes," says Senate historian Don Ritchie. "This was the epitome of success in the late 19th century." But the link between corpulence and power would cast a dark shadow within the halls of Congress. USCapitol/Flickr hide caption 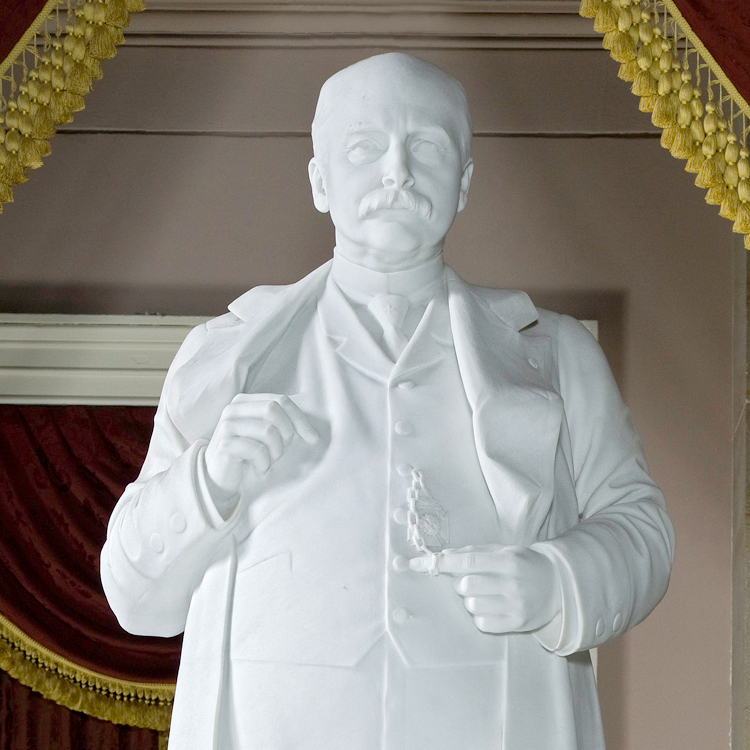 Sen. George Shoup, who died in 1904, was Idaho's first governor. "He protrudes," says Senate historian Don Ritchie. "This was the epitome of success in the late 19th century." But the link between corpulence and power would cast a dark shadow within the halls of Congress.

"And if we did it by merely replacing milk and cheese and fatty meat with carbohydrates, with pasta and potatoes and rice," Taubes says, the theory was that we would live longer, and be thinner.

So, one of the top goals listed in the original dietary goals: eat more carbs.

"In retrospect, it's kind of amazing, but this was the thinking at the time," Taubes says.

Now, to be fair, the kinds of carbs the authors of the guidelines had in mind were whole grains, fruits and vegetables.

But this message was lost in translation. What did Americans hear? Fat is bad; carbs are good.

And the food industry saw the low-fat, high-carb mantra as an opportunity to create a whole new range of products. Fat-free frozen yogurt, fat-free muffins and cookies — the formula was: Take out the fat; add lots of sugar.

By the early '90s, foods with little or no fat were flying off the shelves. Pretzels were good (no fat); nuts were bad (loaded with fat). Baked potatoes were OK, but hold the sour cream. And salads? Sure, greens are great, but no oily salad dressing.

Lots of you told us in our survey that you remember this fat-free mania well, and that it didn't work out so well for you.

Taubes argues that it was not good for the country.

"Right around this time [when people started eating more refined grains and sugar] is when Americans starts getting fatter and fatter, and more diabetic," Taubes says.

So, in trying to address one problem — heart disease — by cutting way back on fat, many experts we talked to agreed that the original dietary goals may have helped fuel other problems, like diabetes and obesity.

In an informal survey, we asked readers of The Salt if they bought packaged food labeled as fat-free during the fat-free marketing craze. 76 percent said yes, and 70 percent told us they ate more refined carbohydrates and sugars as a result.

"There were definitely unintended consequences of the original guidelines," Mary Flynn, a professor of medicine at Brown University, told us.

She says if you look at the results of studies where participants followed low-fat diets, there's no convincing evidence that this pattern of eating cuts the risk of disease.

One of those studies, published in 2006, was part of the Women's Health Initiative that included thousands of women.

It's complicated to look back over 40 years and tease out an independent effect of diet on heart disease. That's because Americans have changed many other habits. For instance, many people stopped smoking, started exercising and began taking statin medicines to control cholesterol.

But what's become clear, Flynn says, is that avoiding fat is not the key to a healthy diet.