Accessibility links
This Pie Chart Is Delicious And Statistically Sound : The Salt Back in 2012, The Salt surveyed readers on their favorite pies during our Pie Week series. Recently, an Australian reader tells us she pie-charted our results with mouth-watering real pie.

This Pie Chart Is Delicious And Statistically Sound

This Pie Chart Is Delicious And Statistically Sound 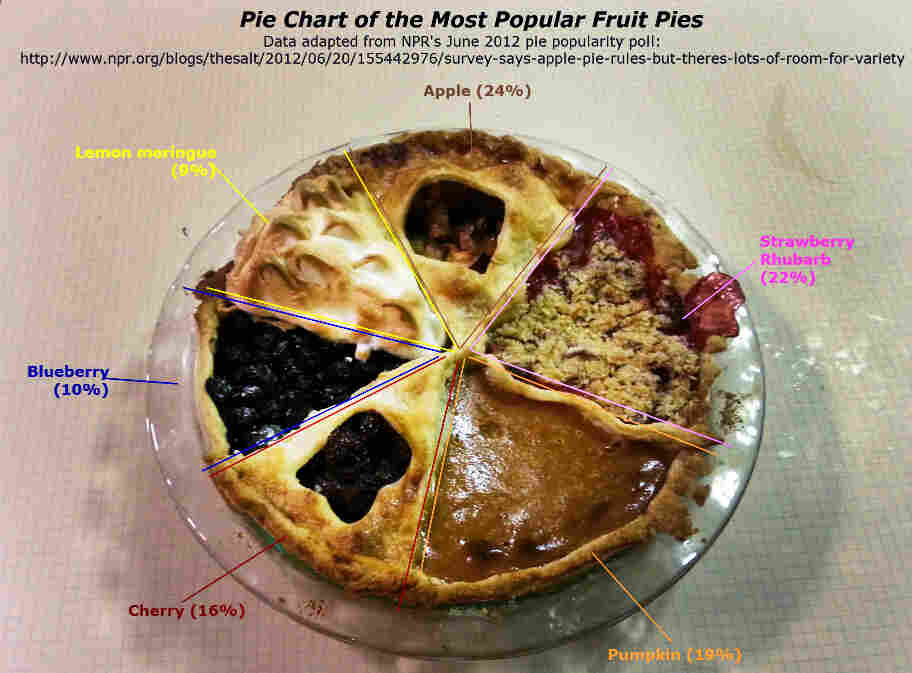 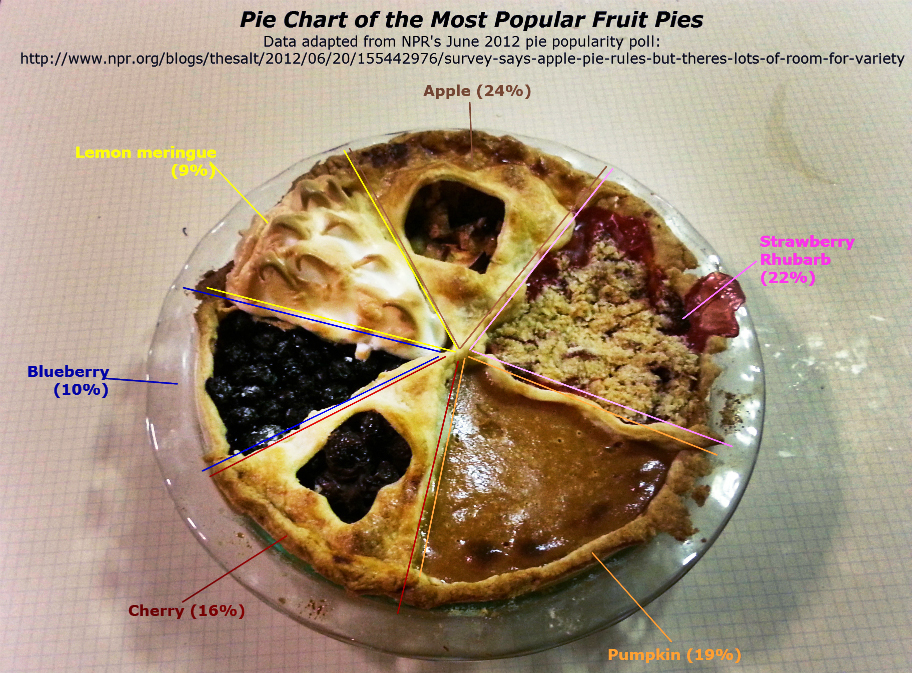 Remember Pie Week? That series of stories, produced with our friends over at Morning Edition in July 2012, was a hit here on The Salt.

Well, thanks to the wonders of Internet search, we have an excuse to revive Pie Week and celebrate the creativity it inspired once again.

Last week via our Twitter account, @NPRFood, we learned that an enterprising Australian baker with a taste for data visualization had gone looking for hard data to make an edible pie chart. Fortunately for us, she discovered the results of our (highly unscientific) survey, in which we'd asked Salt readers to tell us their favorite pie, either to bake or to buy.

We salute Melissa Wakefield, the amateur baker and chart whiz who's also a forensic chemist. Wakefield documented her baking adventure on her blog Healiocentric, which is mostly dedicated to gaming. She writes:

"I'm not sure where exactly I got the idea to do this. I think it was just a combination of rewatching How I Met Your Mother (Marshall's pie chart of bars and bar chart of pies bit) and my desire to practice making pies that coalesced into a grand idea."

And a highly impassioned project it was. Amazingly, Wakefield says this pie — which required two crusts and six separate fillings — was only the third she'd ever baked. And she couldn't stop giggling as she baked it. 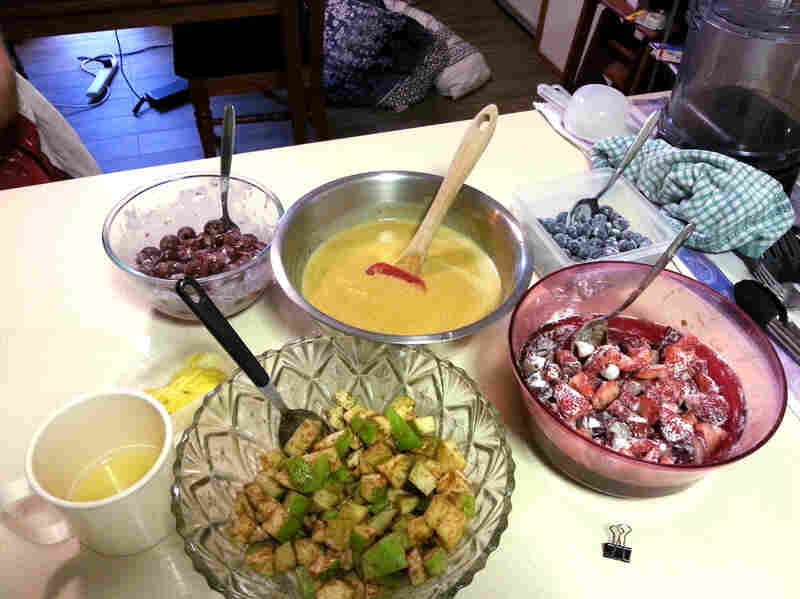 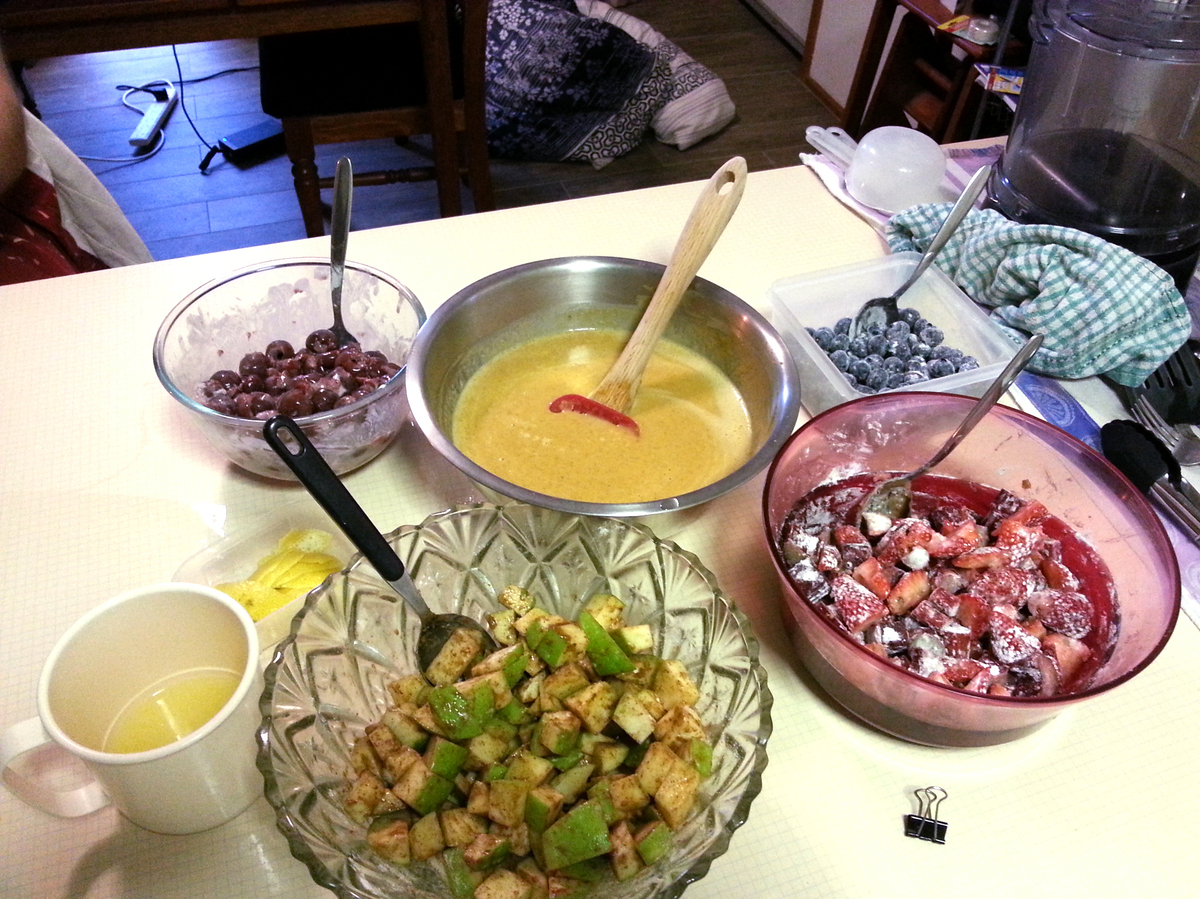 As she writes on her blog, she had to adjust our survey data a bit to make it work. Our readers' favorite pie was "other" — perhaps coconut, peach or some other regional pie? — and she wisely decided to leave out the 4 percent who voted for chocolate cream. That left her with six fruit fillings to make: apple, strawberry rhubarb, pumpkin, cherry, blueberry and lemon meringue.

For the crust, Wakefield made a double batch of Martha Stewart's pate brisee recipe (she made double to be sure she had enough to build the walls dividing the flavors).

Making the walls was tough. "Pie crust dough is not a great construction material," writes Wakefield.

Her favorite flavor? Pumpkin, she tells us in an email. "It's pretty much unheard of here in Australia so I have to order the pumpkin filling [Libby's, of course] over the Internet," she says. "We don't even have the right kind of pumpkins to make our own from scratch." 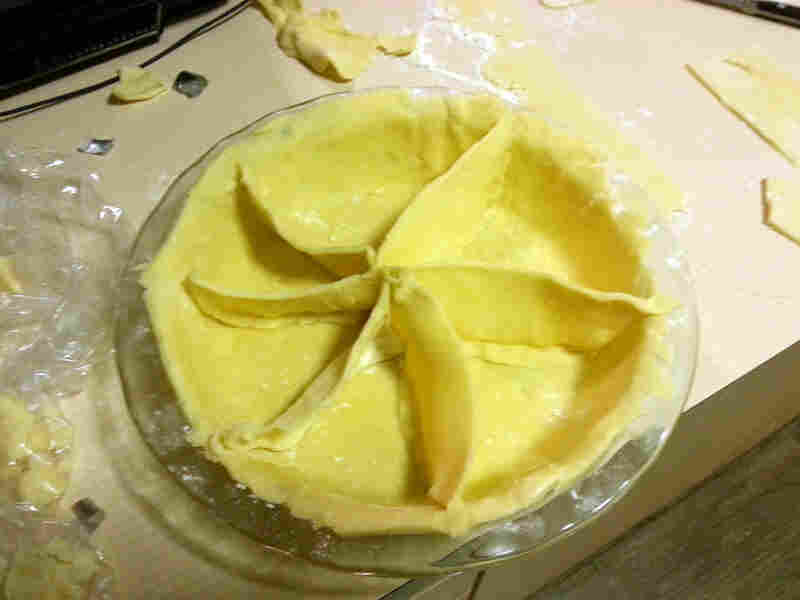 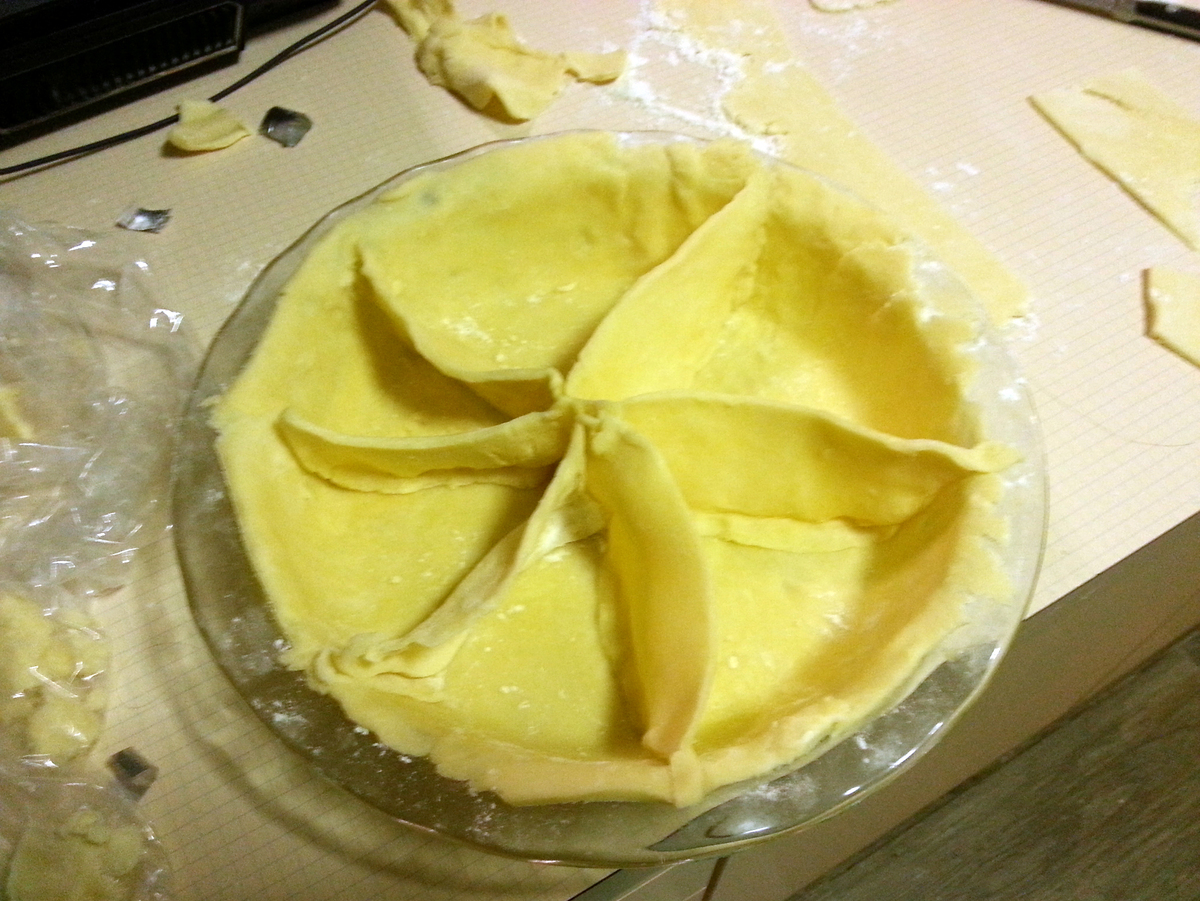 The rhubarb was also a brand new ingredient for her. But most challenging was the lemon meringue section, she writes.

While the other sections were baking, she cleverly lined the lemon meringue "slice with foil and filled it with baking beads, so that the crust itself would bake but not burn or over-brown." In the meantime, she made the lemon custard filling and meringue toppings, which she added when it came out of the oven.

"It was a very ambitious project, and I wasn't certain it was going to work, but I couldn't be happier with how it turned out," she says. "I love the intersection of silly, delicious, and math (perhaps my next project should be a Venn diagram cake)."

Bravo, Melissa. We'd love to see a Venn diagram cake from you. (Turns out someone has already attempted Venn diagram quiche and pizza, and even a dumpling.)