Accessibility links
No Plows, Cows, Sows: Not Your (Grand)Father's Youth Farm Group : The Salt A record number of kids are joining the FFA, formerly the Future Farmers of America. Many are from urban and suburban areas, and they're shifting the group's focus from agriculture to food science. 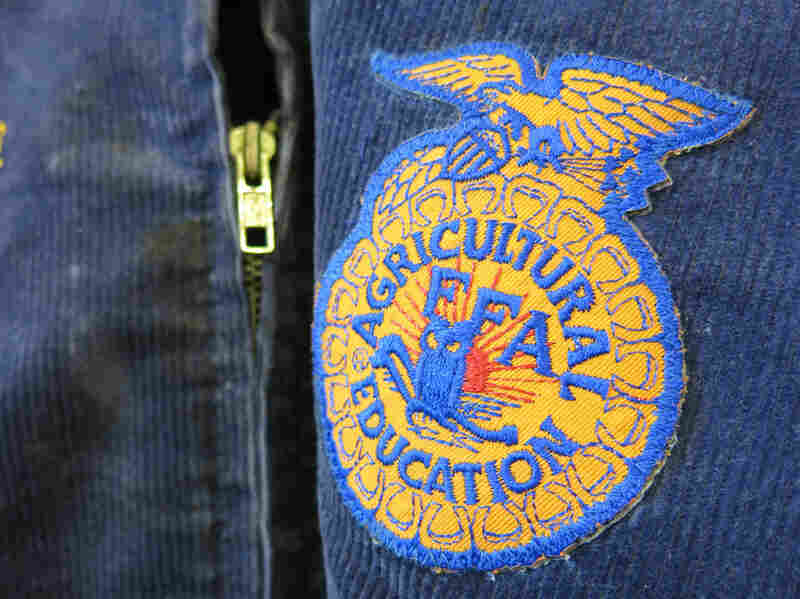 The blue corduroy jackets sported by high schoolers in FFA have been the signature look since its founding in 1928. Luke Runyon/Harvest Public Media hide caption 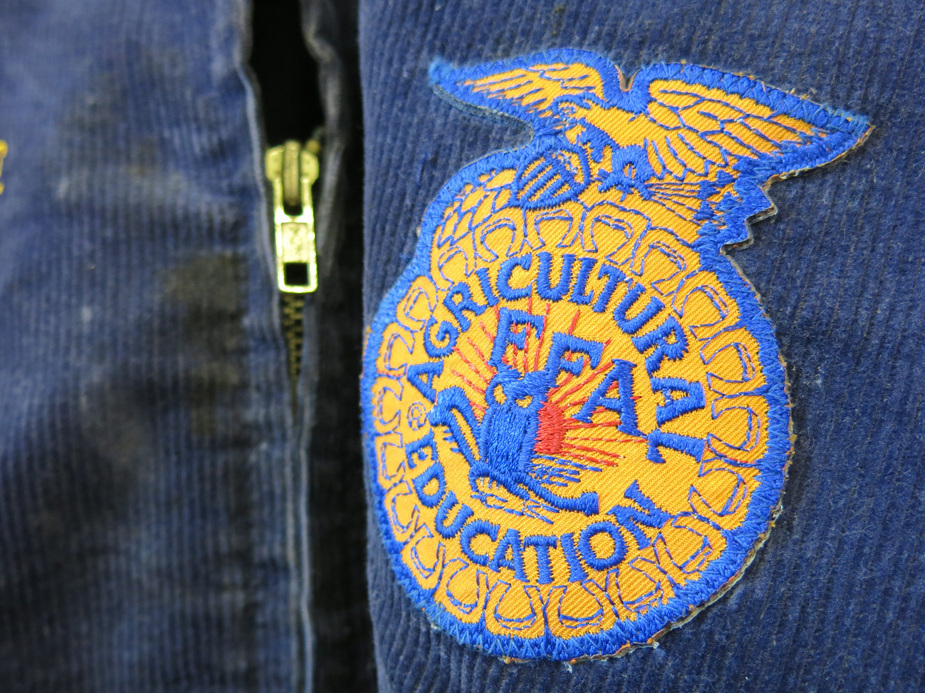 The blue corduroy jackets sported by high schoolers in FFA have been the signature look since its founding in 1928.

A record number of kids are donning the blue corduroy jacket of FFA, formerly known as Future Farmers of America. The jacket is an icon of rural life — the organization is sort of like Boy Scouts for farming, and it dates back to the 1920s.

Even though fewer and fewer young people grow up on farms these days, the extracurricular activity is attracting more urban and suburban kids interested in food and agricultural science.

"You wouldn't think there's a livestock facility back behind here," Melton says. He's president of the district's FFA chapter, and takes care of the farm's cows, goats and pigs during school hours.

From 2007 to 2012, the U.S. lost almost 100,000 farms, according to recent census data. During the same period, FFA enrolled an additional 60,000 students, and opened new chapters, bringing the organization to its highest number of students in its almost century-old history, just shy of 580,000.

Unlike FFA members of the past, Melton didn't grow up on a farm. His parents did. And that's the norm for the 60 other students in his chapter.

"We're in an urban area, so most of our members do not grow up on property, though they still have that connection to agriculture," he says.

But because most millennials are several generations removed from the farm, the school district is going to great lengths to make agriculture appeal to more students.

Lauren Hart, the district's FFA adviser and an agriculture instructor, says in her eight years of teaching, she has noticed a shift. A greater number of students are interested in organic farming methods, grass-fed beef and cage-free eggs. And Hart says she can't just ignore what students want to learn about.

"The interest and the ability both of students going into production agriculture is declining," she says. "It's just not something that a high school student either wants to or believes they can get into."

That's why Hart reaches into areas you wouldn't typically associate with farming — law, public policy, entrepreneurship and bookkeeping. And that's something that doesn't always sit well with a few students' parents who hail from farm country. 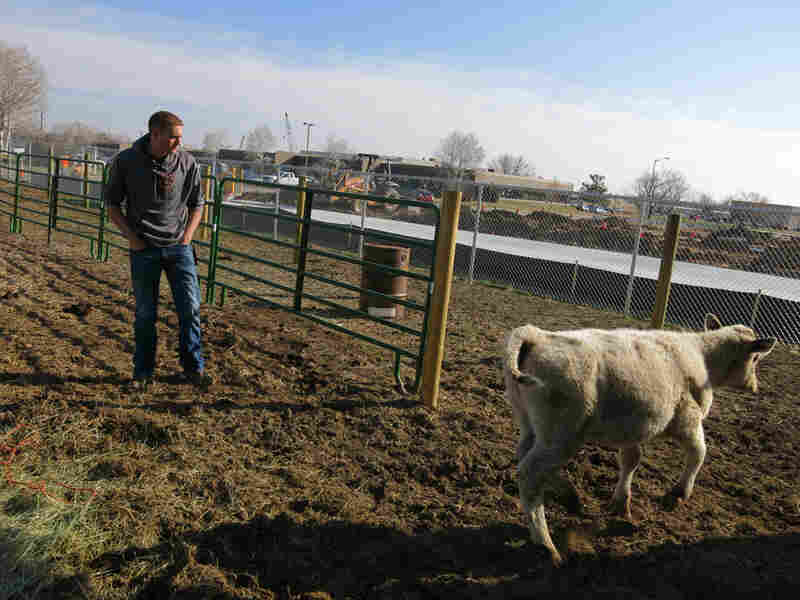 Reece Melton, 18, of Longmont, Colo., is one of 580,000 FFA members across the country. Luke Runyon/Harvest Public Media hide caption 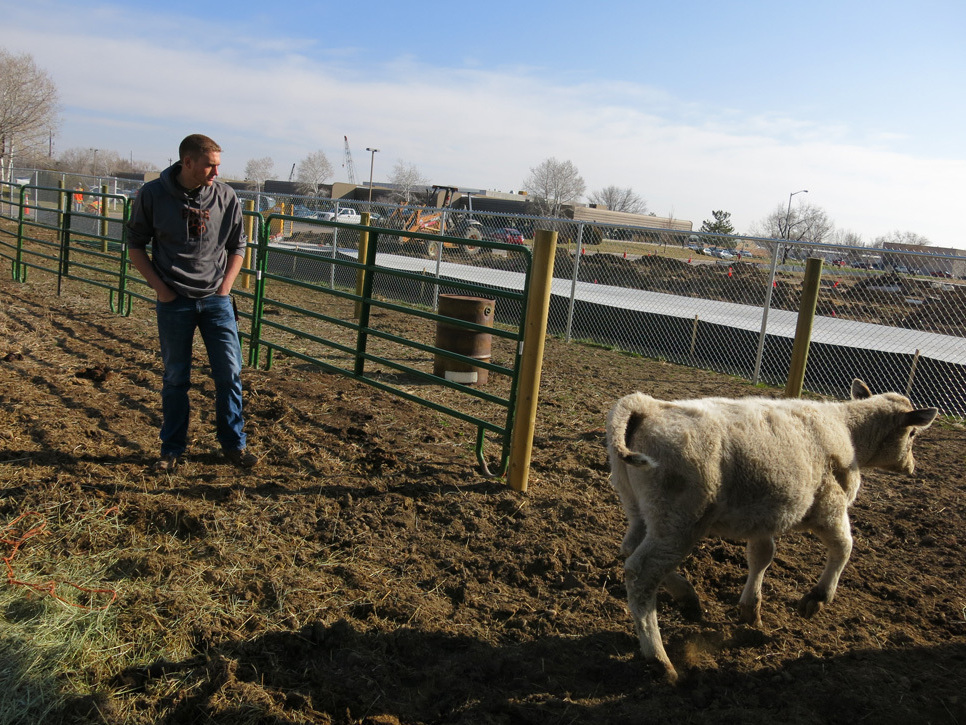 FFA's CEO, Dwight Armstrong, says programs like Hart's are taking off. And the changing focus appears to be working. Suburban and inner-city chapters in places like Chicago, Philadelphia and New York are some of the fastest-growing in the country.

And reframing agriculture into food science begins to point students on more stable career paths, he says — something that couldn't be said during the 1980s farm crisis. That's when enrollment numbers slumped, the name went from Future Farmers to FFA, and the group's survival mode mantra became "adapt or die."

Back at the school farm in Longmont, Melton and his classmate are planning a coop for a flock of fast-growing chickens. Both have the iconic FFA blue corduroy jackets hanging in their closets at home.

At first, Melton says, he griped about wearing it. "It's definitely not the most stylish outfit," he says. "But it's something that's more relative to tradition."

It's the one tradition that's held on while everything around it changed.