Accessibility links
Tabasco And Beer-Flavored: Not Your Easter Bunny's Jelly Beans : The Salt On the eve of Easter and National Jelly Bean Day, let us probe the mysterious origins and unexpected ascendancy of the humble candy. And to celebrate, we've sampled Jelly Belly's newest flavors.

Tabasco And Beer-Flavored: Not Your Easter Bunny's Jelly Beans

Tabasco And Beer-Flavored: Not Your Easter Bunny's Jelly Beans 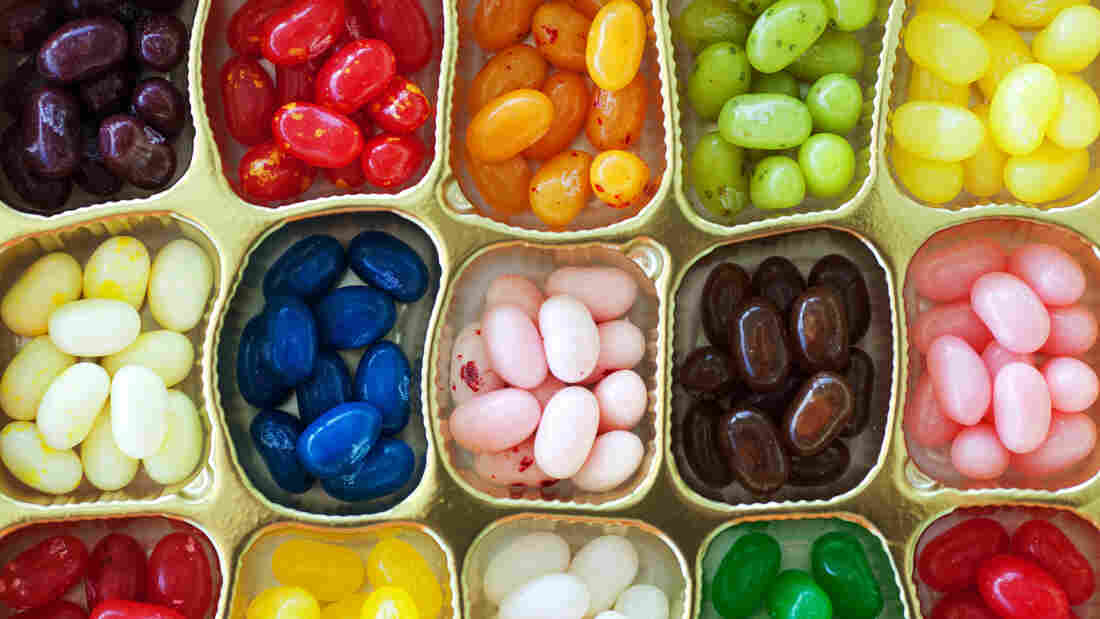 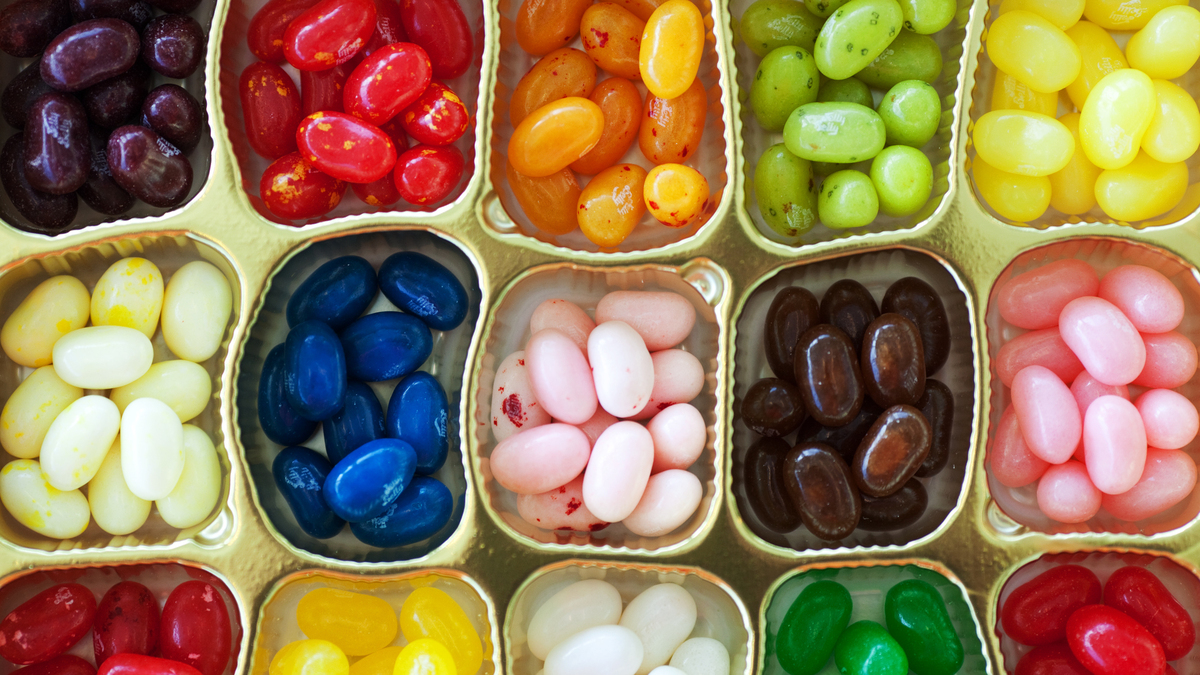 Jelly Belly says its most popular flavors include the savory-sweet Buttered Popcorn and Very Cherry.

This Easter, you can drown your sorrows in a glass of Jellybean milk — or with a pile of beer-flavored jelly beans.

The new twists are a sign that jelly beans are continuing their march to candyland domination. Americans buy 16 billion beans in the Easter season alone (mid-February until the actual holiday), according to the National Confectioners Association. The candy even has its own holiday on April 22.

That's quite an accomplishment for a seemingly simple candy. But in fact, there's nothing simple about the bean. It is a riddle wrapped in a sugar shell. 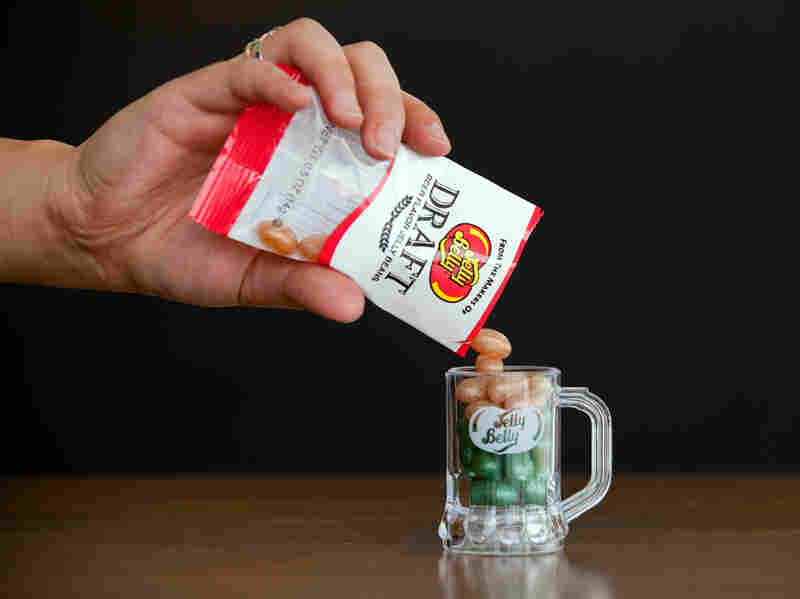 One new flavor from Jelly Belly is called Draft Beer. But there's no tipple here: These beans are nonalcoholic. Meg Vogel/NPR hide caption 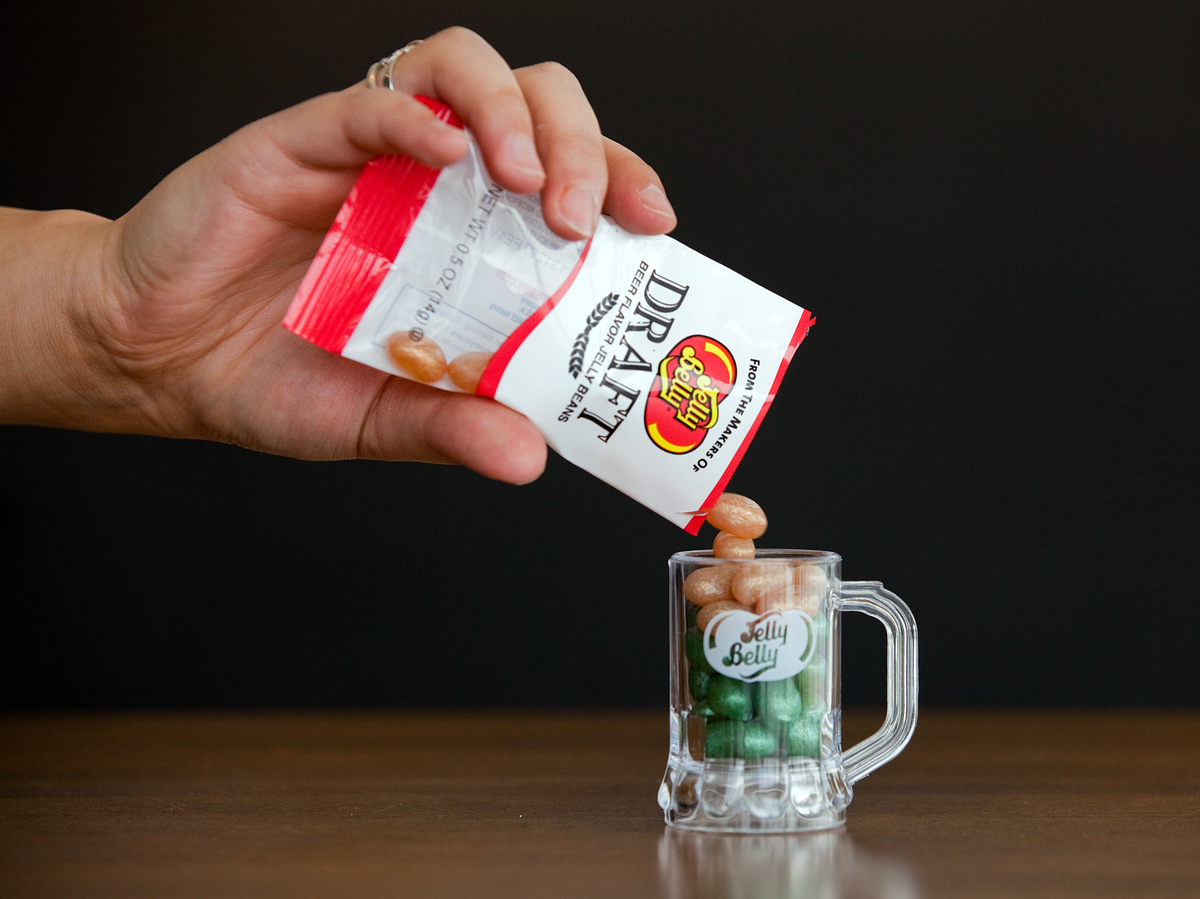 One new flavor from Jelly Belly is called Draft Beer. But there's no tipple here: These beans are nonalcoholic.

The treat is definitely an American invention, says Samira Kawash, the blogging Candy Professor and author of "Candy: A Century of Panic and Pleasure." But its exact origins are "lost in the mists of time."

Several websites refer to an 1861 ad from a Boston candy-maker, urging families to send jelly beans to family members in the Union Army fighting in the Civil War. Kawash has her doubts. The jelly bean is "two kinds of candy combined," she notes: soft innards and sugar shell. A machine called a starch mogul is used to mold the insides.

The next stage is "panning," where a machine shakes the beans in a pan with hot sugar syrup for three to 10 coatings, depending on how thick a coat is desired. (That's also how candy-coated Jordan almonds get their shell.) And finally, the beans must dry out.

The mogul and panning machines weren't widely available in the U.S. until after the Civil War.

Even if you're making beans with this technology, a jelly bean takes about seven days to be born. But that didn't deter candy-makers in those early days of the American candy business. "The name of the game was novelty," says Kamash. "It was worth it to do something a little more challenging to catch people's eyes."

Kawash found the first reference to "jelly beans" in an 1880 book. The term entered Webster's in 1905. In the 1910s, advertisements began promoting the product for Easter, because of the egg shape. For decades after, jelly beans were pretty much an Easter phenomenon.

Then came the bean revolution of 1976.

Candy and nut distributor David Klein had a dream of unconventional flavors — root beer, green apple, watermelon. Inspired by blues guitarist Leadbelly, he cooked up the name Jelly Belly and partnered with a West Coast candy-maker.

At first, Jelly Bellys flopped. "I couldn't give them away," Klein remembers. He persuaded an Associated Press reporter to do a story and met the reporter at a shop where he'd invited friends to line up for Jelly Bellys. The reporter was impressed. After the story ran in the Chicago Tribune, Marshall Field's department store ordered $20,000 worth of beans. The rest is jellistory.

"We sell as many at Christmas as at Easter," says Tomi Holt, spokeswoman for Jelly Belly. The top three flavors: Very Cherry, Buttered Popcorn and the polarizing black licorice (which seems to have as many haters as it does lovers).

New varieties are always appearing. In 2013, an eye-watering Tabasco bean arrived. And 2014 marks the debut of beer, a flavor the public has long requested, says Holt.

It took three years for Jelly Belly scientists to concoct the right balance of sweet and bitter for the beer bean. The company will not share its "trade secret" formula except to say that no alcohol is involved. The sparkly, champagne-colored beans do indeed conjure up a brewski — but not necessarily in a good way. "Tastes like flat Bud Light," said one of our tasters. Others were reminded of the scent of a dive bar at dawn.

As for the Jellybean milk, available for a limited time from Prairie Farms, an Illinois dairy, there are no actual jelly beans in it — just milk, sugar, monk fruit juice, citric acid, artificial and natural flavors, guar gum, and red and yellow dyes. Our samplers were divided. "Like a melted rainbow," said one of the radiant pink beverage. "Like fruit-flavored amoxicillin," said another.

Even as jelly beans break flavor and format barriers, some gourmands prefer an old-fashioned version: the unenticingly named "pectin jelly bean." Pectin, derived from fruit, was the go-to thickening agent for years but has been supplanted by cornstarch, which melds better with nonfruit flavors and is also less expensive.

But pectin leads to a more tender interior and brings brightness to tart fruit flavors. "I'm not a jelly bean person," one taster said of pectin beans purchased at Whole Foods. "But I could eat these — wow, they're grown-up jelly beans!"