Accessibility links
Hunting For The Tastiest Egg: Duck, Goose, Chicken Or Quail? : The Salt We hard-boiled them. We donned blindfolds. And we chowed down. In our eggsperiment, can you guess which bird prevailed in the ultimate showdown of duck vs. chicken?

Hunting For The Tastiest Egg: Duck, Goose, Chicken Or Quail?

Hunting For The Tastiest Egg: Duck, Goose, Chicken Or Quail? 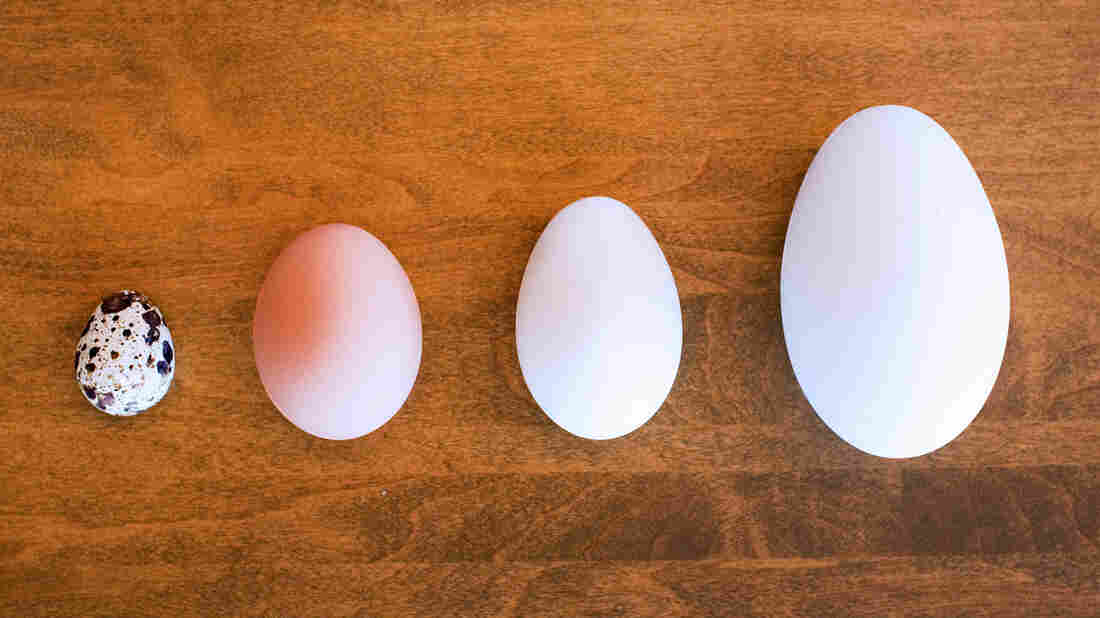 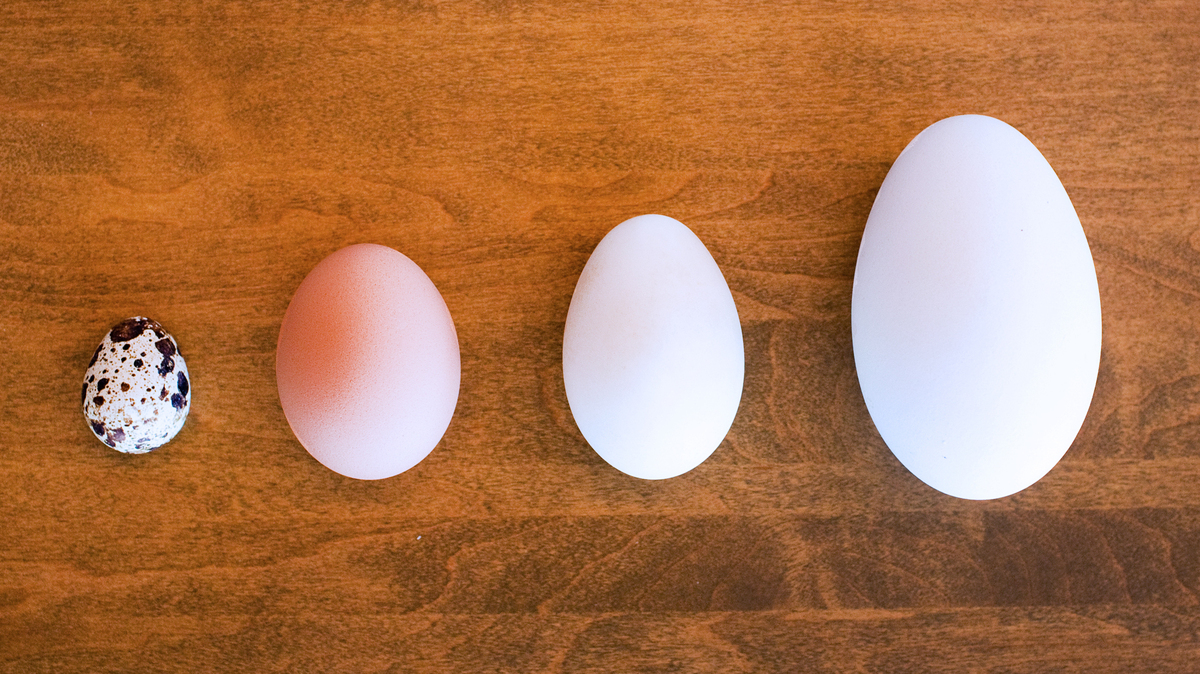 The chicken clearly rules the roost of American egg production. Our hens laid 95.2 billion eggs in 2013, according to government figures. And we'll be awash in them Easter weekend: beating them into yolk-laden desserts, hiding them in backyards for small hunters and gobbling candy made in their image.

But many other birds lay tasty eggs, among them the ostrich, quail, duck and goose. Other cultures have long recognized their virtue. The Chinese salt and preserve duck eggs to make "1,000-year eggs"; the Italians, Spaniards and Japanese all have their own take on the quail egg.

The Other Half Of The Egg

I recently had the chance to eat a dozen duck eggs over the course of a few days (while visiting my friends at Abounding Harvest Mountain Farm who raise ducks) and I was immediately won over by their rich flavor and texture. Since then, I've cooked them every which way and am thoroughly smitten.

I wondered how they would stand up in a blind taste test against the chicken egg. To push the test even further, I got my hands on some goose eggs (shipped courtesy of one of the country's few producers, Metzer Farms, in Gonzales, Calif.) and quail eggs.

Sixteen colleagues joined me. Would the duck emerge as the clear victor? I felt pretty certain it would. 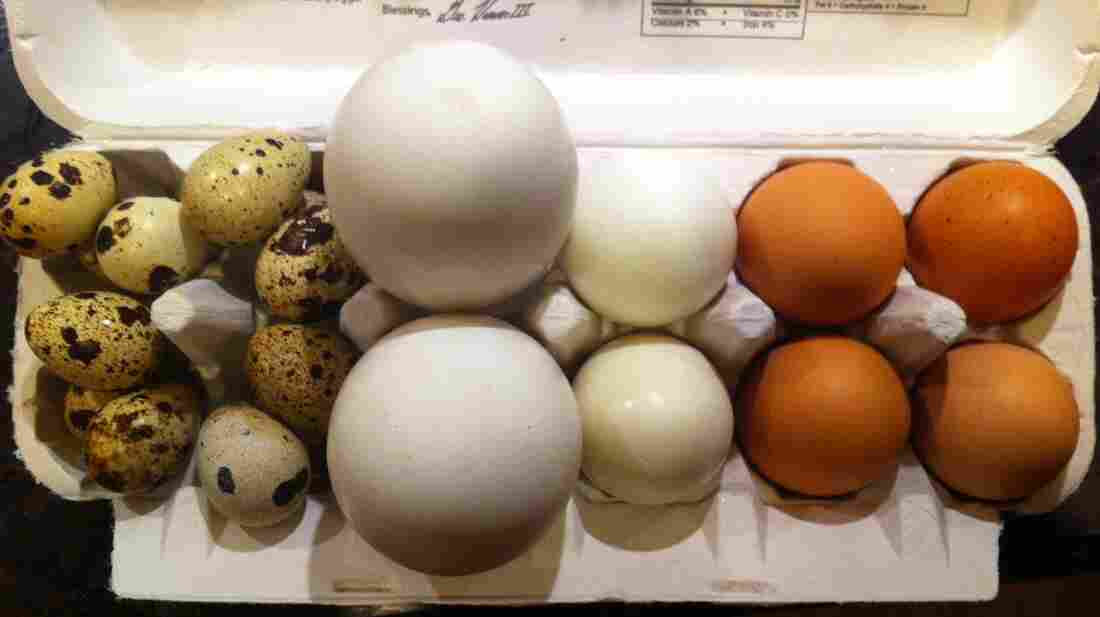 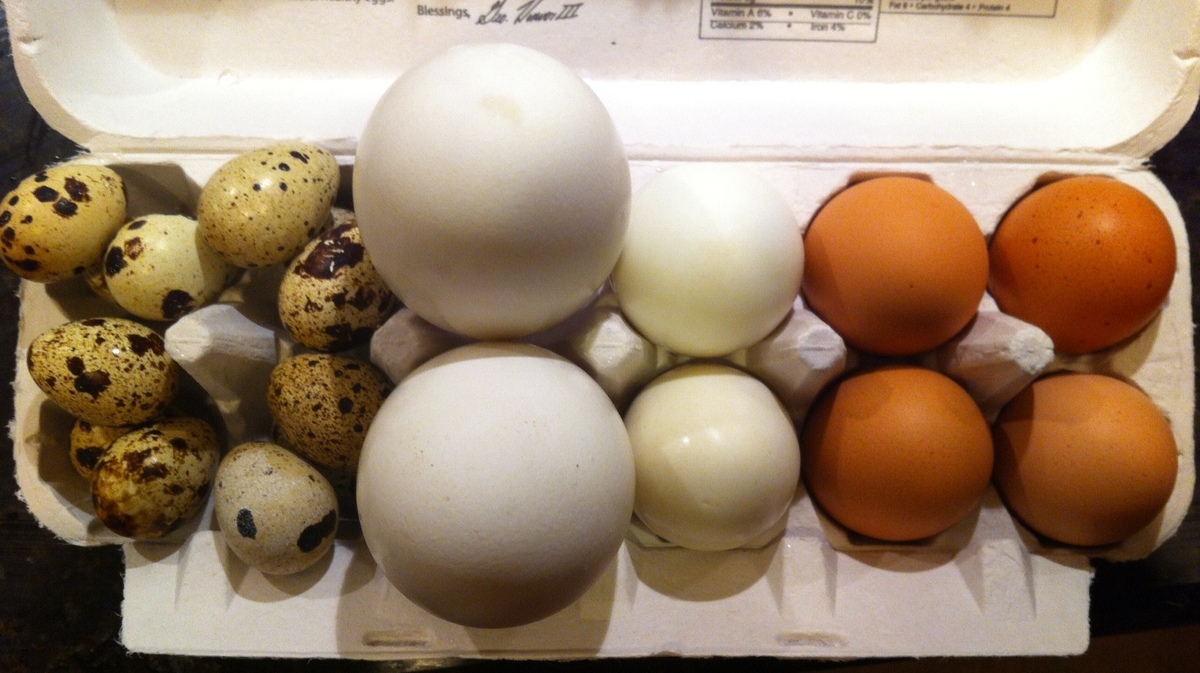 To run as scientific a trial as possible, I hard-boiled all four sets of eggs, staggering the time based on the size. We peeled the eggs, marveling at the pastel blue inside the quail eggs and the heaviness of the goose shell. Then we cut the alabaster ovals into half-inch wedges. 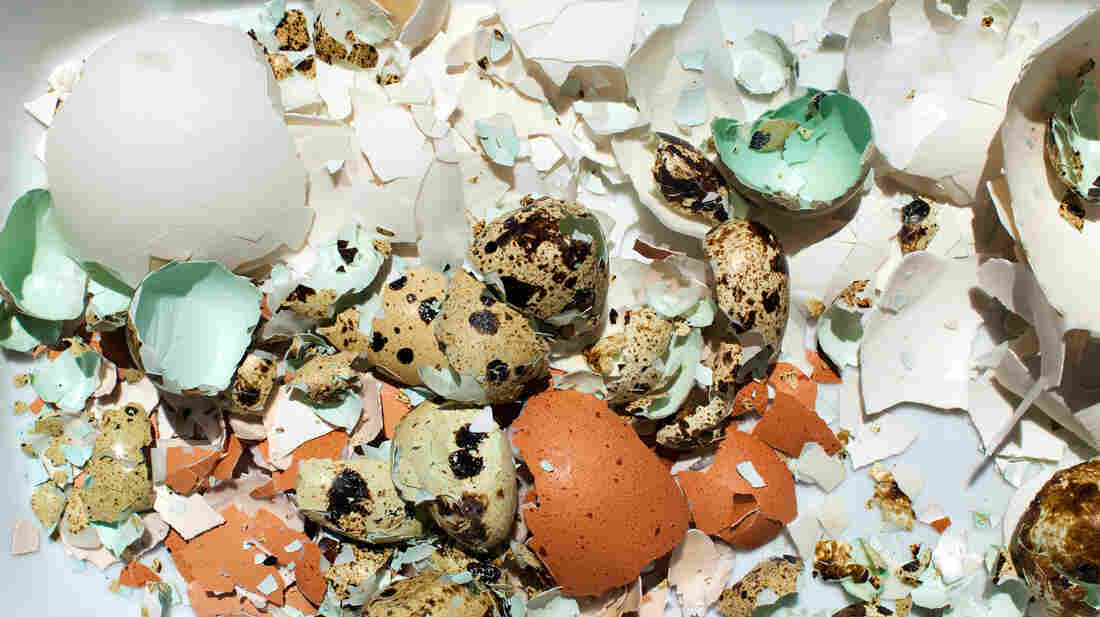 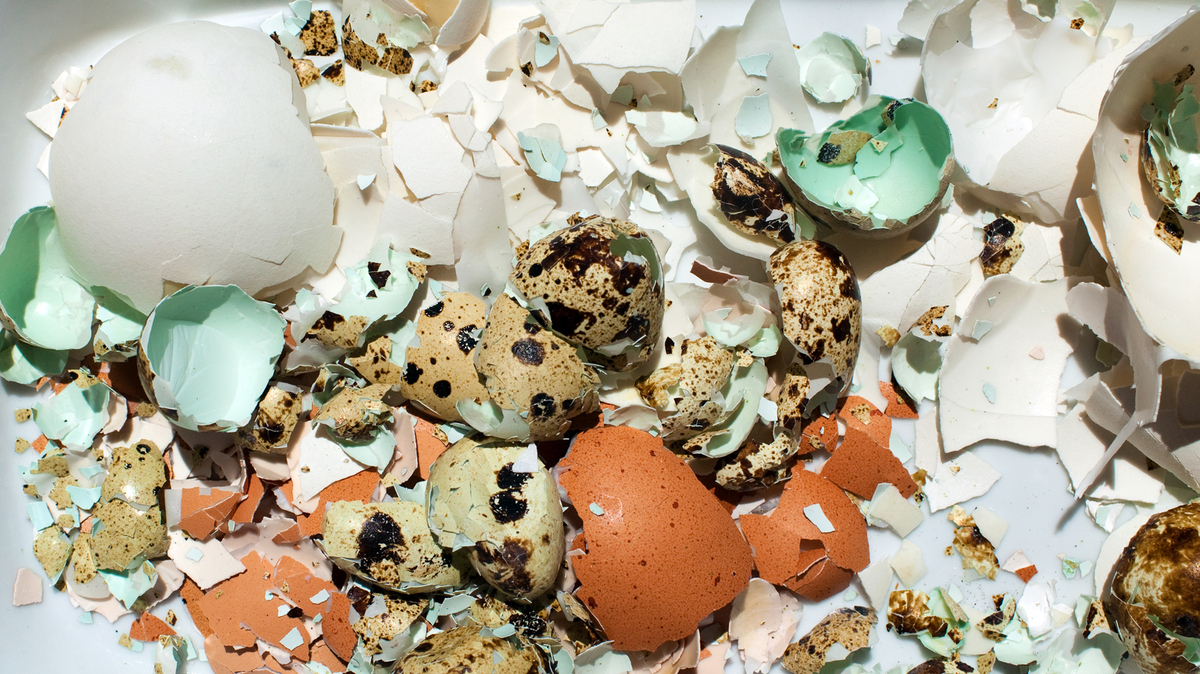 I blindfolded the tasters one by one and fed them a sample from each egg. Their task? To identify the bird species and choose their favorite. 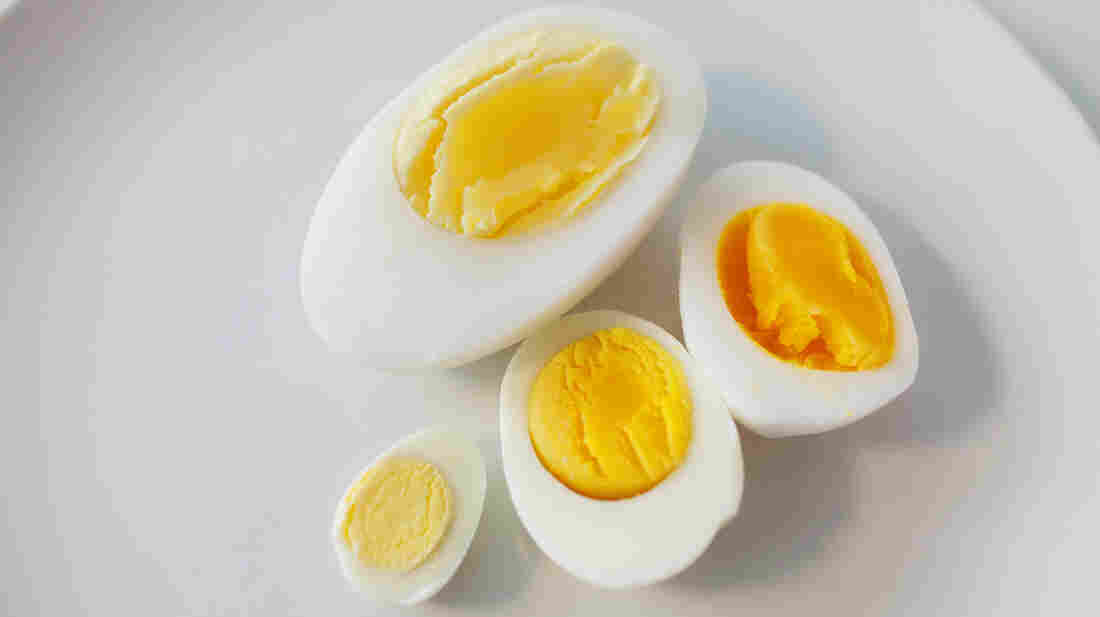 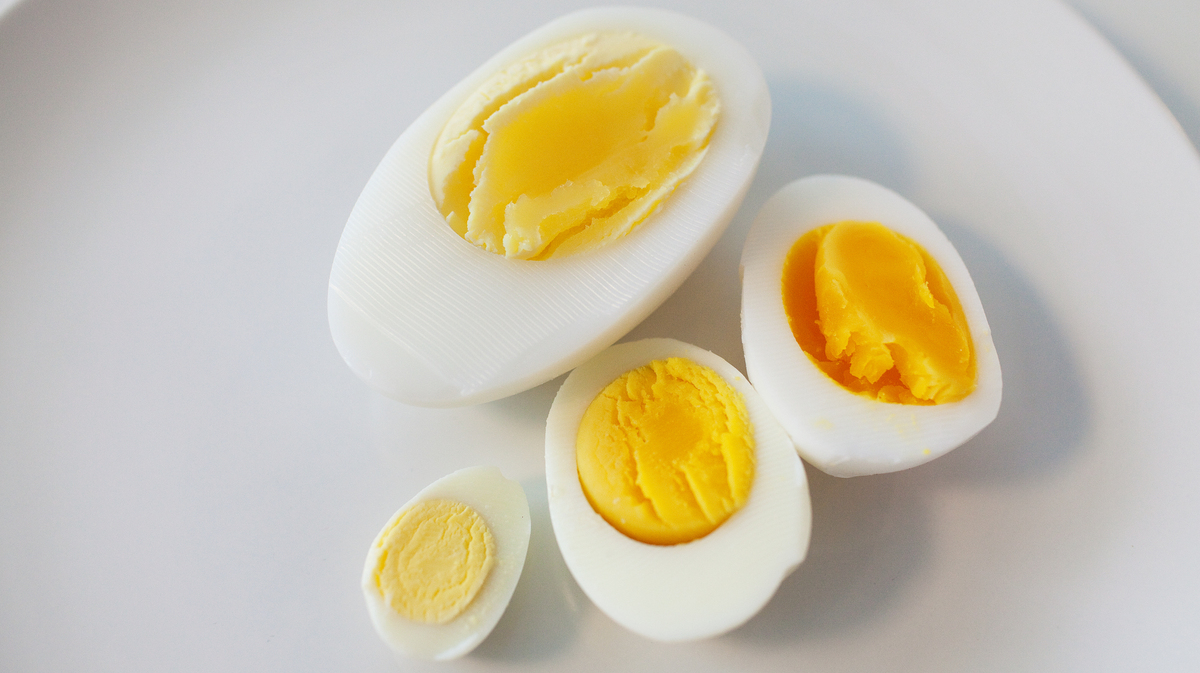 From left: The yolks of quail, chicken, duck and goose eggs.

The results of this study — in which I participated, blindly, as well — are revealing: 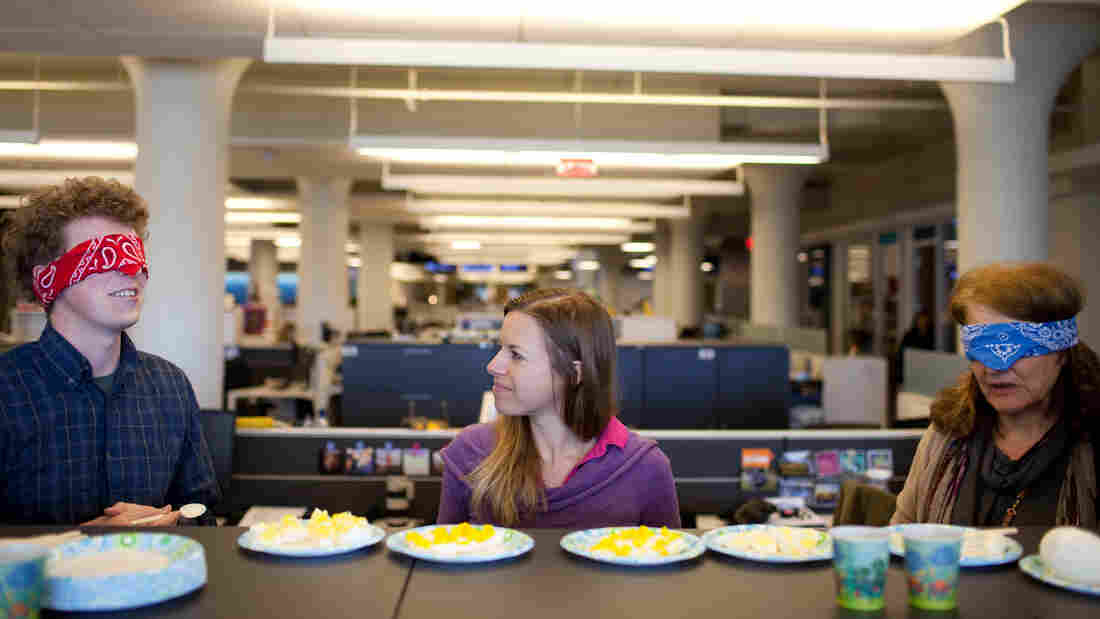 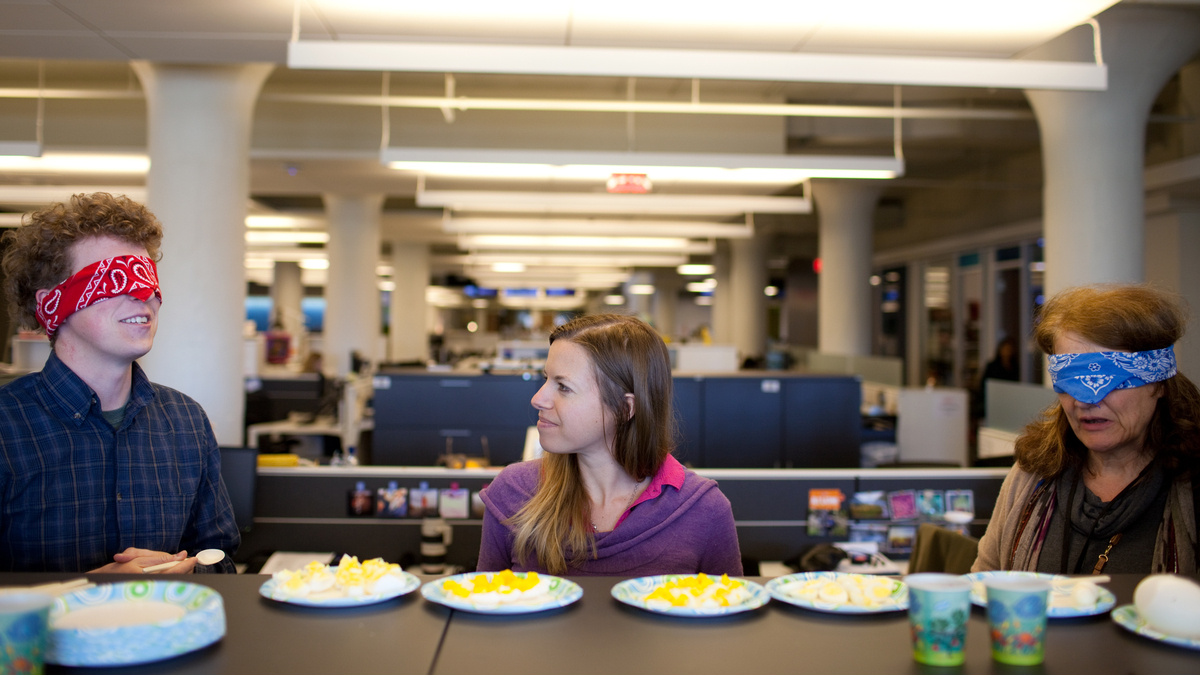 The point of the exercise, of course, was to find out which egg people liked best.

Final results: chicken with 6 points, duck with 5 points, quail with 4 points and goose with just 1. (One colleague refused to play along.)

Since our sample size wasn't that big, I can't draw any major conclusions except that people prefer familiar flavors. Still, I was pretty happy to see I'd won over four people with duck. I was one of the duck endorsers, and I must confess that I recognized the taste as soon as the yolk hit my tongue.

I wondered, if people like duck eggs, why are they so little known in the U.S. — and so hard to come by? (They're expensive, too, at $5 or more a dozen.)

I sought out John Metzer of Metzer Farms, the largest egg-laying duck hatchery in the U.S. and supplier of my friend's flock (and the goose eggs).

"Chickens are more efficient — they can make more eggs per pound of feed than ducks, and feed is a major cost in producing eggs," says Metzer. "And ducks don't do well in wire cages that chickens are in. Their feet can't handle it."

So until we can breed a more efficient duck with chicken-like claws, there's little hope the duck egg will overtake the chicken.

In the meantime, anyone know where I can get an ostrich egg?