Accessibility links
African Food With A Twist: Dakar Pop-Up Restaurant Raises The Bar : The Salt Three chefs in Senegal are helping put West Africa on the culinary map. They move their monthly pop-up restaurant around Dakar, introducing diners to new takes on familiar ingredients like the peanut. 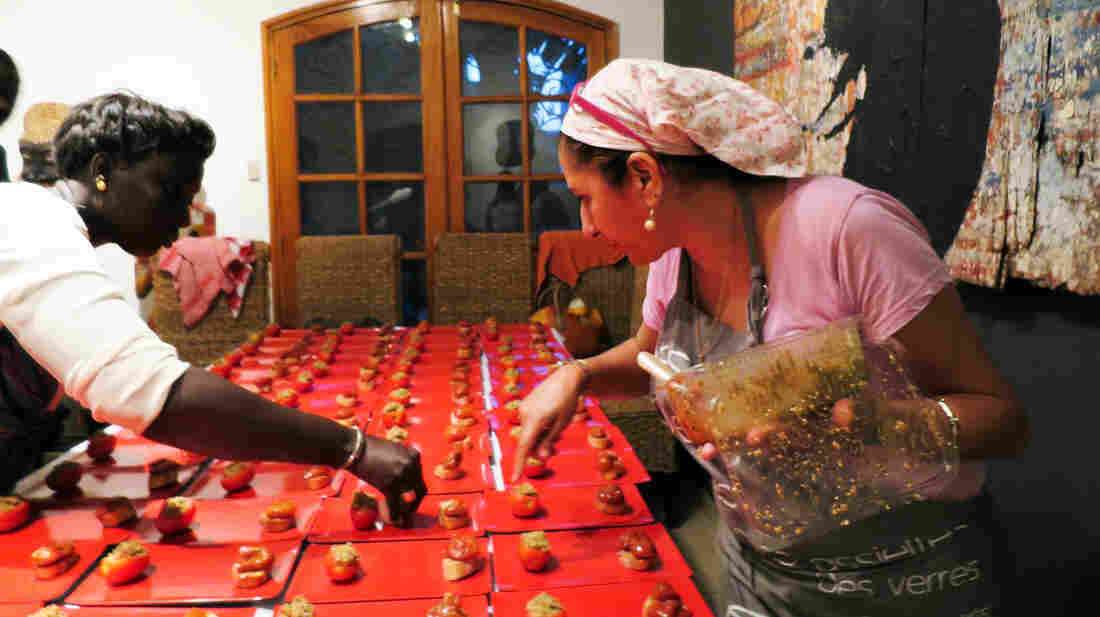 Magida Safaoui, right, and an assistant plate tomatoes at a Trio Toques event in April. Safaoui helps out the three chefs who run the restaurant. Doreen Akiyo Yomoah for NPR hide caption 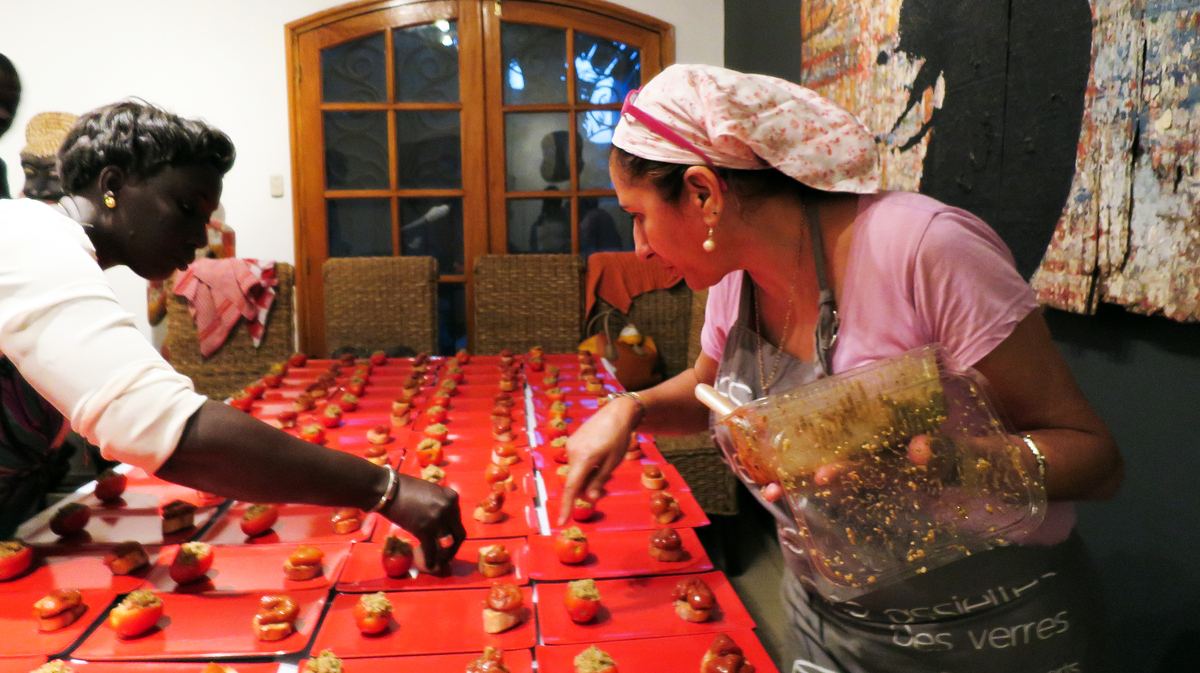 Magida Safaoui, right, and an assistant plate tomatoes at a Trio Toques event in April. Safaoui helps out the three chefs who run the restaurant.

West Africa hasn't competed with the likes of Paris or Barcelona as a culinary destination, but a handful of food lovers there are making inroads to change that.

Visitors to Ghana can now sample the work of mixologists who specialize in liquors made with local ingredients. In Bamako, Mali, vinophiles can head to the annual Beaujolais Nouveau wine festival. And in Dakar, Senegal, there's Trio Toque.

Trio Toque is a group of chefs — Michka Seroussi, Amy Regalia and Selassie Atadika — who are committed to serving high-quality, locally-grown food. That commitment is helping to raise the bar for what Dakarians can expect from a restaurant meal.

They've run their nomadic restaurant in this capital city on the westernmost tip of Africa since 2012. Once a month, they serve five-course meals at a location that is disclosed only to confirmed guests. The idea was the brainchild of Ghanaian-American chef Atadika, who had heard of pop-up restaurants in the U.S. and the United Kingdom, but never in Africa. 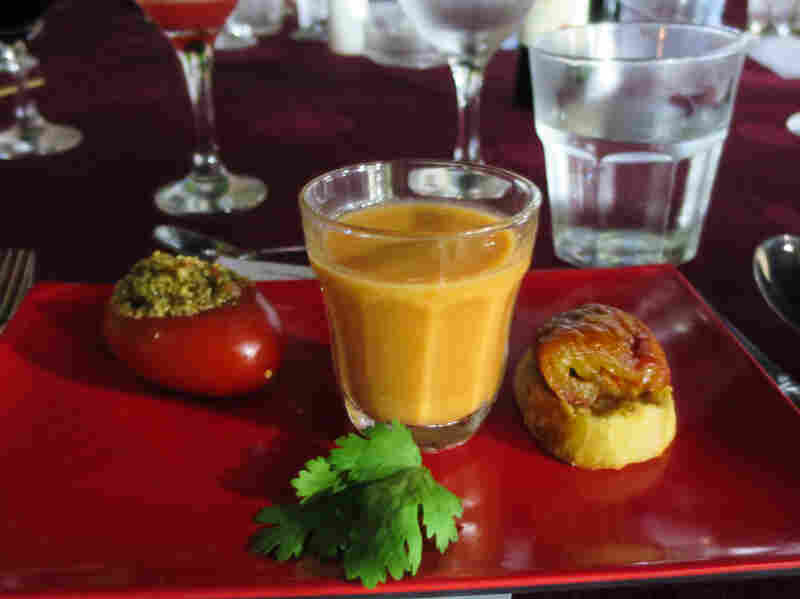 A couscous-stuffed tomato, tomato gazpacho and a piece of bruschetta at a recent Trio Toques event. Doreen Akiyo Yomoah for NPR hide caption 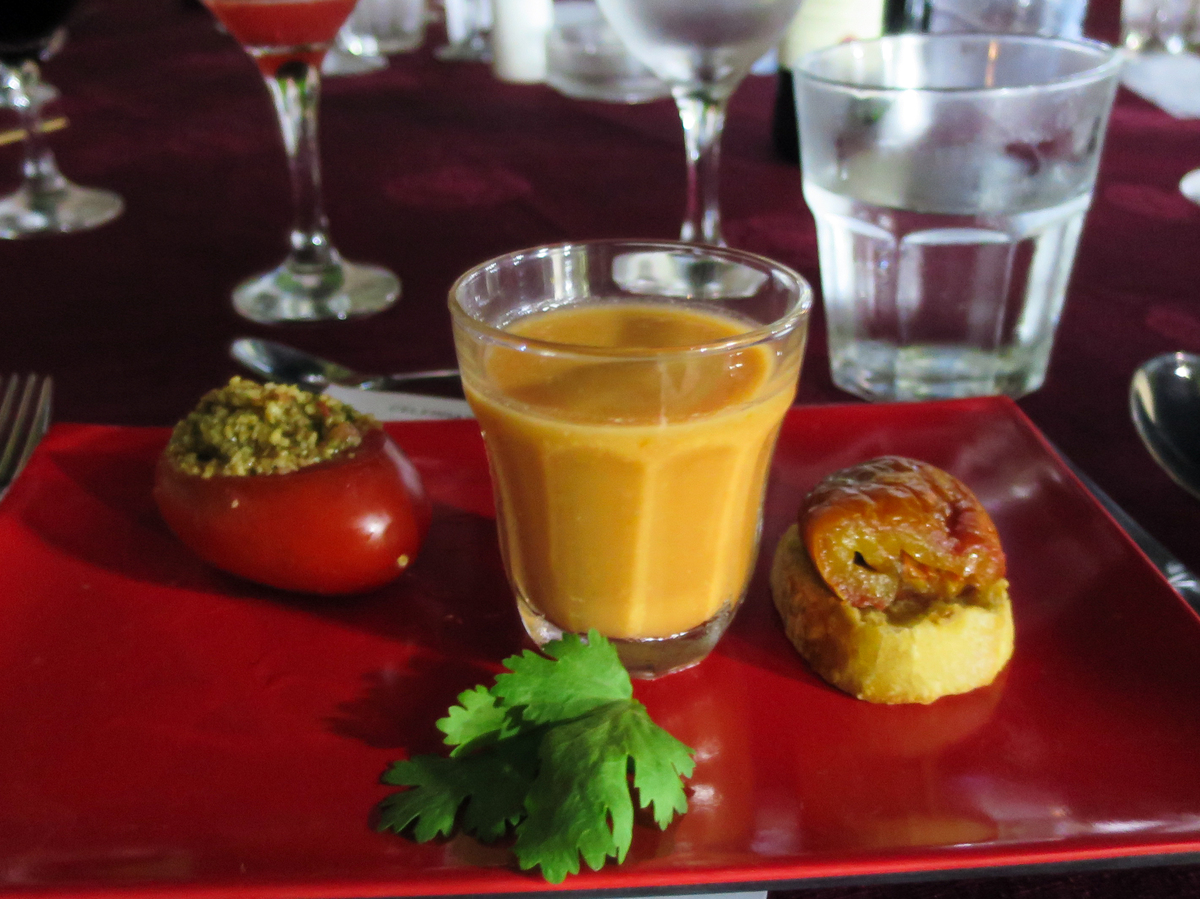 A couscous-stuffed tomato, tomato gazpacho and a piece of bruschetta at a recent Trio Toques event.

Atadika and Seroussi met working in development in Dakar. They found that they had in common a love of food, and decided to start a cooking club. There, they met Mettito Watson, who comes from a long line of farmers and small town restaurant owners. The club had a simple rule: "We used only local ingredients. [We met] and the three of us became obsessed about food," Atadika says.

The three friends took a month off from their full-time jobs in international development in Dakar and headed to New York together for a one-month immersion course at the Culinary Institute of America to learn traditional European techniques. There, they were the only non-professional chefs.

Atadika calls Trio Toque "an extreme hobby. It really started because we wanted to make sure we didn't lose the skills we learned." (Watson has since returned to the U.S., and Amy Regalia has replaced him in the trio.)

In addition to maintaining their skills and developing their individual styles, Trio Toque makes it a priority to highlight local ingredients and use them in a way that is unexpected in Africa. In April, the meal featured a trio of tomatoes, flounder and hard clams, and even goat cheese ice cream.

Atadika is most passionate about what she calls "African Renaissance" cuisine — for example, taking peanuts, a staple food in West Africa that most Westerners tend to think of as just a bar snack, and making unexpected dishes such as mousse.

One thing that stood out to Atadika as she traveled around Africa for her day job is an abundance of excellent food. She says: "the presentation needs to be worked on, but it's really good."

Meanwhile, she has observed that the gourmet restaurants don't serve much local food.

"Most high-end restaurants in Africa don't serve African cuisine, and I want people to know how good our food is," says Atadika. "How do we teach each other about culture through food? How do we think about the history of the continent through food?" 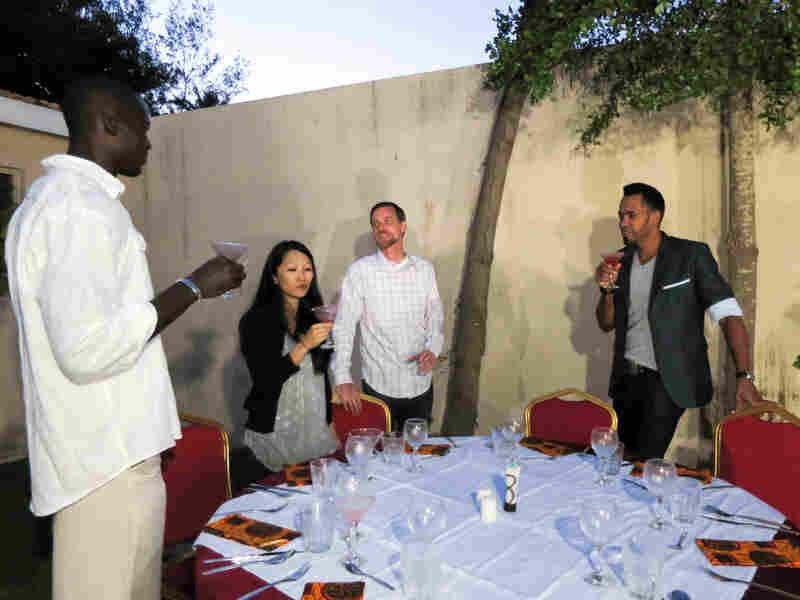 Once a month, Trio Toques serves a five-course meal at a location in Dakar that is disclosed only to confirmed guests. Doreen Akiyo Yomoah for NPR hide caption 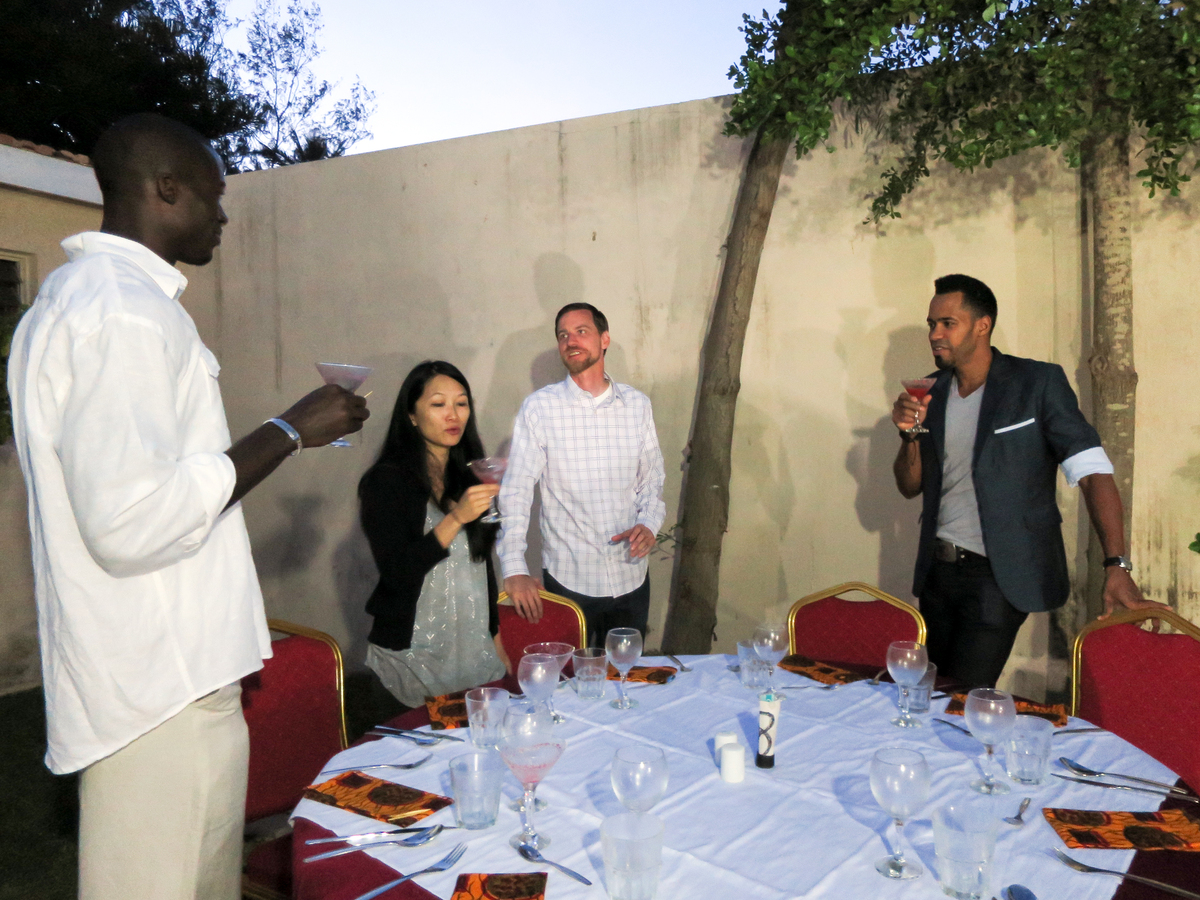 Once a month, Trio Toques serves a five-course meal at a location in Dakar that is disclosed only to confirmed guests.

What started as a love of cuisine has turned into a fixture in Senegal's food community. Yumiko Yokozeki says she keeps coming back to Trio Toque because, "The meals are wonderful. They're creative and there's no inhibition. They serve things beautifully, and they use local ingredients but combine it with French methodology. I've never seen anyone leave disappointed."

Jeanne and Michael Stulman, a couple from Washington, D.C., and first-timers at Trio Toque, say the experience came highly recommended by friends. "It's an opportunity to eat good food and meet people," Michael says.

Each month, someone different hosts the event. In April, Wendy Spivey, an Australian, opened her Dakar home to guests for a second time after hosting her first dinner in December: "I don't mind hosting, and the food is brilliant," she says.

The monthly dinners are mainly populated by ex-pats and foreign visitors — a point that is not lost on the Trio Toque.

"It really started by word of mouth. Our first event just had 20 guests that we basically forced to come, and we hadn't really had the opportunity to connect with Senegalese diners — we need to work harder to engage local networks in these events," Atadika says.

One challenge may be that the dinners cost about $50, putting them out of reach for many, although there is a substantial and growing African middle class. And eating out at a restaurant in Senegal is considered largely a luxury only for the very rich. People tend to eat at home or at mom and pop lunch shops.

But the Trio Toque chefs are eager to spread the word about fine dining, African-style. Atadika will return to her native Ghana soon, and plans to bring the nomadic restaurant model to Accra, continuing to focus on using local ingredients and supporting local farmers. The Ghanaian version will be aimed more at a local clientele base, and there will be fewer courses, she says.

There are signs that she won't be alone in stoking the region's food revolution. Ghanaian and South African filmmaker Tuleka Prah's My African Food Map is dedicated to showcasing cuisine from West Africa and the rest of the continent. And the first ever Dakar Restaurant Week took place in February, encouraging local residents to patronize establishments that they typically wouldn't visit.