Accessibility links
Here's The Scoop On Jackfruit, A Ginormous Fruit To Feed The World : The Salt It's the largest tree fruit in the world. It's nutritious. And because it's pretty easy to grow, it has the potential to be a star in the developing world. But ... does it taste good? 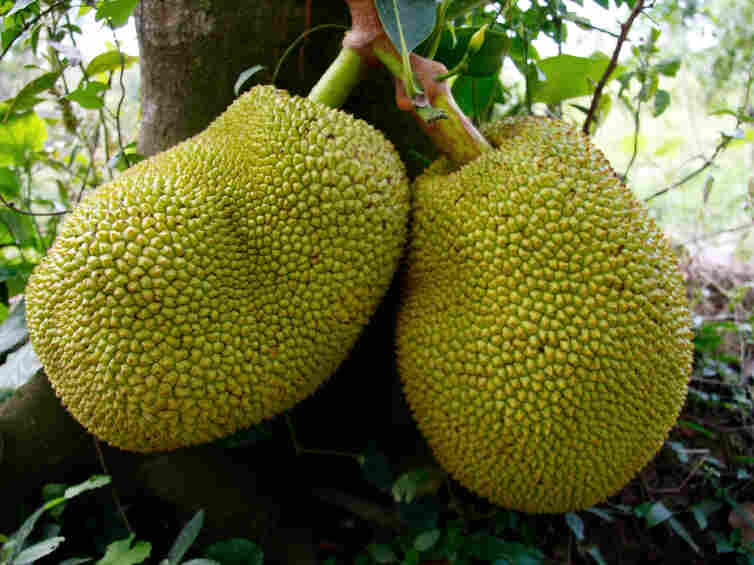 Jackfruits grow on the branches and trunks of tall trees. You don't wait to harvest until they drop of their own accord — by that time, they'd be overripe. iStockphoto hide caption 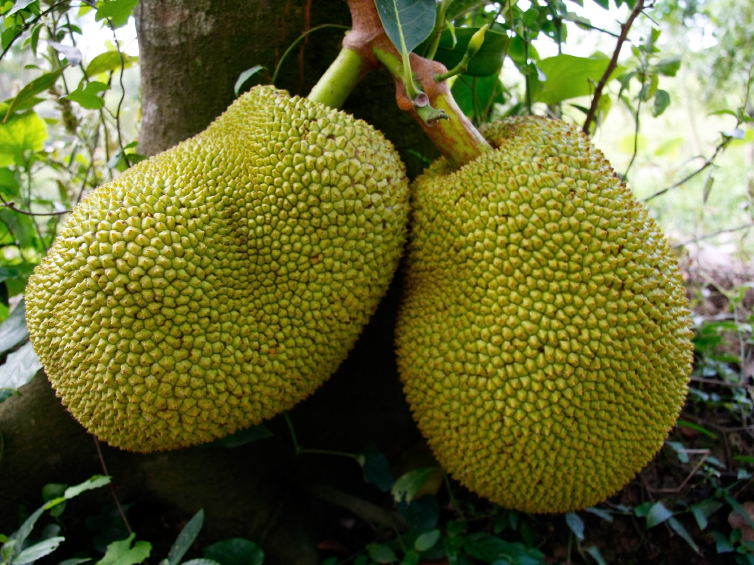 Jackfruits grow on the branches and trunks of tall trees. You don't wait to harvest until they drop of their own accord — by that time, they'd be overripe.

It's not every fruit that gets its own international symposium.

Then again, the jackfruit is not your typical fruit. It's got a distinctive, musky smell, and a flavor that some describe as like Juicy Fruit gum.

It is the largest tree fruit in the world, capable of reaching 100 pounds. And it grows on the branches — and the trunks — of trees that can reach 30, 40, 50 feet. (Trunk-growing is a good thing because it reduces the odds of a jackfruit bopping you on the head.)

Jackfruits are also a nutritional bonanza: high in protein, potassium and vitamin B. And, with about 95 calories in about a half a cup, they aren't quite as high-carb or caloric as staples like rice or corn.

Yet the jackfruit is "an underutilized crop" in the tropical-to-subtropical climate where it thrives, says Nyree Zerega, director of the graduate program in plant biology and conservation at Northwestern University and the Chicago Botanic Garden. In countries like India and Bangladesh, where the jackfruit was once widely cultivated, it has fallen out of favor.

So in mid-May, the University of Agricultural Sciences in Bangalore, India, will devote two days to revving up production and marketing of the jackfruit as well as its cousin, the breadfruit.

For parts of the world facing food insecurity — the buzz phrase for the struggle to provide enough nutritious food — the jackfruit could be manna from a tree. The tree itself requires "relatively little care once it's been established," says Zerega. By contrast, popular crops like wheat, rice and corn need lots of irrigation and pesticides. And the jackfruit is a perennial so it doesn't require constant replanting.

There won't be an instant payoff for new farmers. A tree takes five to seven years to bear fruit. Eventually, a yearly yield might be in the 150- to 200-fruit range, says Jonathan Crane, a tropical fruit crop specialist at the University of Florida.

Fruits are typically picked in summer and fall. You don't wait to harvest until they drop of their own accord — by that time, they'd be overripe.

The tree belongs to the mulberry family. And it's got an impressive lineage. Around 300 B.C., the Greek philosopher Theophrastus wrote: "There is also another tree which is very large and has wonderfully sweet and large fruit; it is used for food by the sages of India who wear no clothes."

Probably was a jackfruit. India is thought to be its place of origin.

As for the name "jackfruit," it most likely emerged from what the Portuguese called it, "jaca," which was probably a version of a name used in southern India, "chakka pazham." Jackfruit has other names, too: kathal in Bangladesh, kanun in Thailand and nangka in Malaysia.

Whatever you call it, it's a versatile food source — and thus a potential economic boon for countries that market it. Jackfruits can be dried, roasted, added to soups, used in chips, jams, juices, ice cream. The seeds can be boiled, roasted or ground into flour. Even the tree itself is valuable: high-quality, rot-resistant timber for furniture and musical instruments.

Or you can eat a jackfruit fresh.

The jackfruit is made up of hundreds or even thousands of individual flowers that are fused together. We eat the "fleshy petals" that surround the seed, which is the actual fruit, says Zerega.

The edible portion of a young fruit has a slight crunch when you bite in. As the fruit matures, it may remain firm, but in some varieties it becomes softer and more custardlike.

Curious fruit lovers can find fresh jackfruits in the U.S. Zerega has bought relative peewees (12-pounders at about $2 a pound) at Asian markets in Chicago. Crane sees fresh jackfruits at Asian and Caribbean stores in Florida, where the jackfruit is grown on a limited scale and also imported from Jamaica. Bottled, canned and other products are available online and in specialty markets around the country.

All this reporting made us eager to put the jackfruit to a taste test. We couldn't find a fresh one in D.C., so we bought jackfruit packed in sugar syrup. Since Crane mentioned that frozen jackfruit is "refreshing," we froze some and also ate some out of the jar.

As potential tasters wafted by, the first comment was, "Oh, it has an aroma."

The aroma was compared to overripe fruit, packaged fruit cup, smelly feet, stinky cheese and pet food. But really, it wasn't that bad!

As for the taste: "It tastes better than it smells," was a consistent opinion. The taste was described as "mellow mango," a little peachy, a little pearlike. The texture was compared to chunky applesauce or overripe banana. Also a little mealy and stringy.

A taster who grew up eating jackfruits said he found them too gooey as a kid, and after one bite said, "Still too gooey."

But most tasters liked it. They thought it was sweet in a good, tropical kind of way. They imagined how yummy it would be mixed with yogurt. They liked it semi-frozen (the frozen samples thawed out a bit) and were eager to a try jackfruit popsicle.

But tasters who'd had fresh jackfruits said they beat jackfruit from a jar by a long shot. When pressed, they couldn't explain why.

We'll do a follow-up tasting as soon as we can score a fresh one.