Accessibility links
The Pizza Connection: Fighting The Mafia Through Food : The Salt In the first installment of the new season of Hidden Kitchens, The Kitchen Sisters explore how Sicilians are reclaiming farmland and providing Mafia-free jobs in a region gripped by corruption. 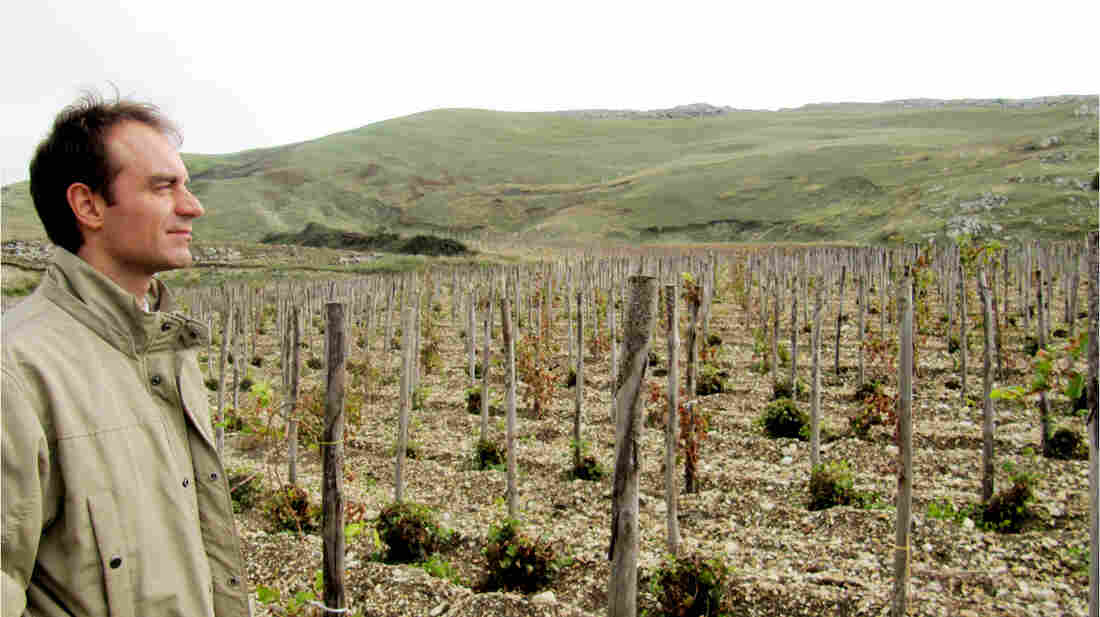 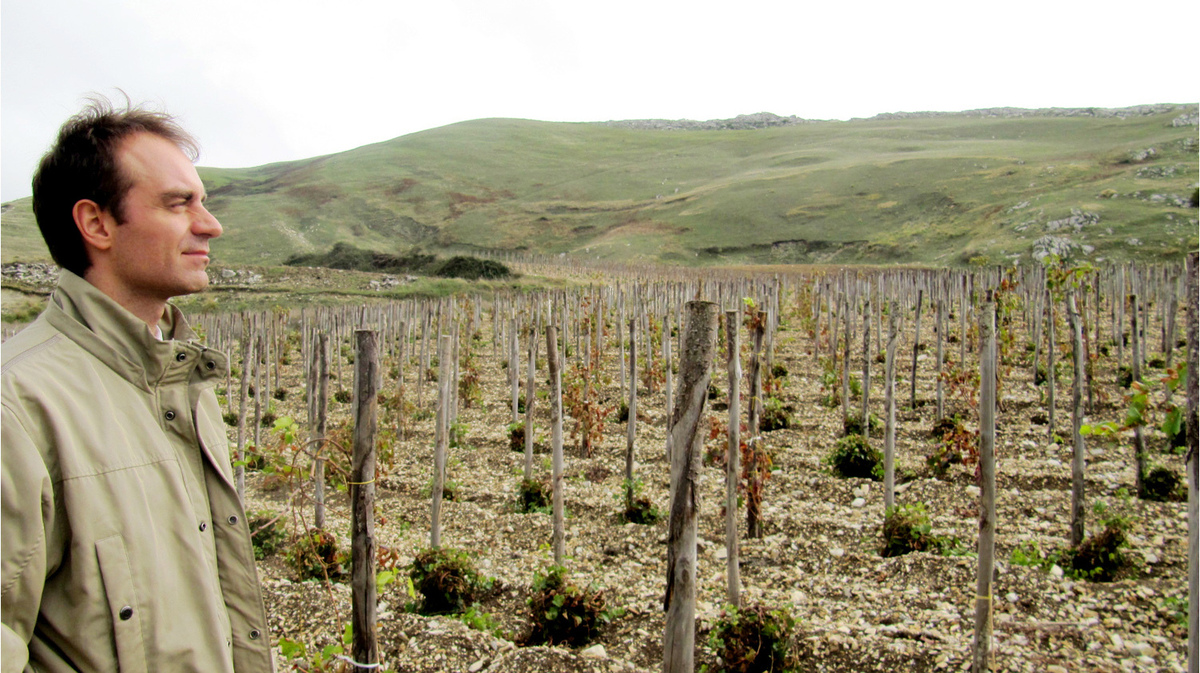 Francesco Galante leads the Libera Terra, a cooperative of farmers and producers who create food and jobs outside of the Mafia's control.

In recent years, the effort to bring the Mafia under control in Sicily has spilled over into the world of food. Today a movement of small organic agricultural cooperatives has sprung up across the island to farm land once confiscated by the Mafia and bring these goods to a global market.

Libera Terra means free land, or land free from Mafia. A cooperative of farmers and other producers working under this banner creates organic olive oil, wine, pasta, grains and more and provides Mafia-free jobs in a country with staggering unemployment, deep-seated corruption and a rich kitchen tradition.

Mastrilli is a photographer and writer who, like so many of the young people of the island, had left to find work, specifically Mafia-free work. His family has a long history in organizing Sicilian agriculture against the Mafia's stronghold on wages, working conditions and employment in the fields. With the birth of Libera Terra, Gabriele has recently returned to the island to promote the cooperatives. 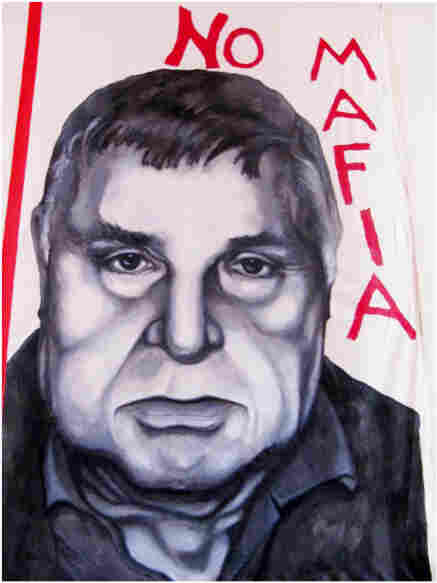 A painting of Mafia boss Salvatore Riina, on display at the Museo Anti-Mafia in Corleone, Sicily. The Kitchen Sisters hide caption 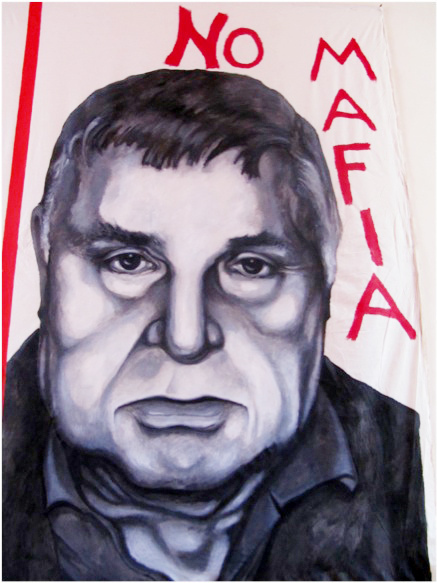 A painting of Mafia boss Salvatore Riina, on display at the Museo Anti-Mafia in Corleone, Sicily.

"A lot of people who have been fighting for agricultural reform across the decades were killed by the Mafia. One of them was my grandfather," he says.

Don Luigi Ciotti is another reformer and one of the founders of Libera Terra. Ciotti, an Italian priest, saw the grip the Mafia had on his country — the drug operations, the prostitution rings, the hold on the most fertile of agricultural lands — and began to organize a movement to fight back through education, employment and agriculture. "What we grow from these lands can now be found in Italian markets," says Don Ciotti. "Pasta, olive oil [and] mozzarella di bufala, created from dairy businesses that were confiscated from the Mafia."

A Bit Of History

"The Mafia is like a snake. It's very difficult to catch," says Mastrilli, as he drives us to the town of Cinisi about 45 minutes from Palermo, to the former home of Peppino Impastato, an anti-Mafia activist whose murder has been attributed to the local Mafia.

"The Mafia built the airport here to control the drug traffic between Palermo and the United States. It was called 'The Pizza Connection,'" says Mastrilli, "because they used to transport the heroin inside tomato cans to the be used in the United States in pizzerias."

The Kitchen Sisters, Davia Nelson and Nikki Silva, are Peabody Award-winning independent producers who create radio and multimedia stories for NPR and public broadcast. Their Hidden Kitchens Series travels the world, chronicling little known kitchen rituals and traditions that explore how communities come together through food— from modern-day Sicily to medieval England, the Australian Outback and the desert oasis of California.

European narcotic distribution was once centered in Marseilles, with French chemists transforming morphine base into heroin, and shipping it from there. The operation was known as "The French Connection" until the early 1970s. After that, the Italian Mafia took over, explains Peter Schneider, a retired professor of sociology and anthropology at Fordham University. Schneider and his wife Jane have studied the Mafia and community in Sicily for decades.

"Heroin traveled from Palermo to the United States in all sorts of containers — in oranges, in cans of tuna, in diplomatic pouches, even under the gowns of nuns who were coming to collect money for their orphanages in Sicily. And some came in the cans of San Marzano tomatoes," says Schneider.

Francesco Galante — lanky, soft-spoken, intense — is the spokesman and leader of the Libera Terra. He picks up the thread as he drives up the steep roads an hour or so from Palermo to the cooperative's vineyards that stretch up the windswept mountainside near San Giuseppe Jato. They are some of the most fertile, beautiful fields, and were once the property of Bernardo Brusca, the boss of San Guiseppe Jato until he was jailed in the 1980s. Now they are home to a thriving organic vineyard.

"To be organic was a form of respect. The idea is being kind to the soil itself: to start anew, to take poisons symbolic and real poisons from the soil itself," says Galante.

Galante says that Libera Terra wants to make products people buy not just for their story but for their quality. They want to provide workers with fair wages and respect, improve the high unemployment rate in Sicily (especially among youth) and undo decades of systemic corruption.

'The Mafia Burned Our Olive Trees'

"In our wine you can smell the sea and the mountains," says Angelo Sciortino, farmer and winemaker for the Placido Rizotto Cooperative, where 40 people now work in the winery and vineyards. "We don't use a lot of machines in our production. We try to use as many people as possible. We still use the hands. Our goal is to give work."

Ten years ago when the Placido Rizotto Agricultural Cooperative started, few people wanted to work for them because they were scared. "The Mafia, they burned the field here just before the harvesting of the grain," says Angelo. "Three years ago when we collected olives for the first time, we had police around us all the time, [for protection] with guns. Then last year the Mafia burned our olive trees. We don't want to want guns. We don't want police. We have to show to the people that to work with Libera [Terra], it's a good thing."

Bringing An End To The Pizzo

As challenging as it has been to go up against the Mafia in the agricultural system, there's something else Sicilians are fighting: the practice of businesses paying pizzo for protection. 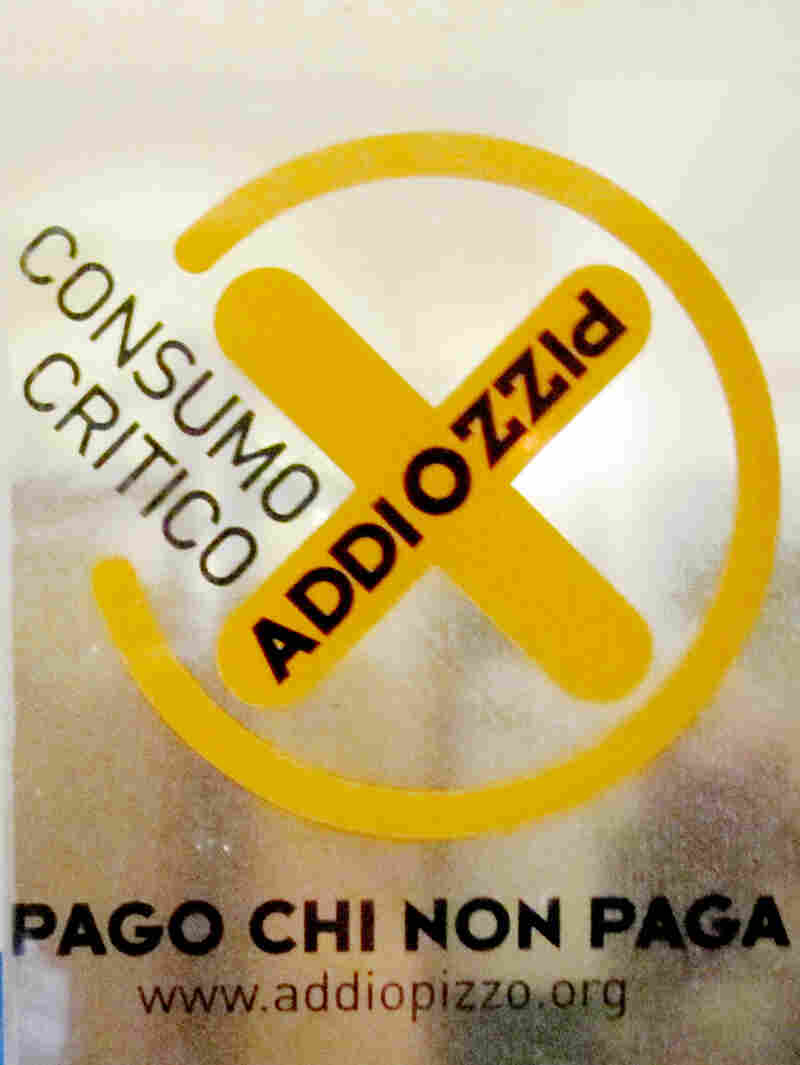 The Addiopizzo sticker on the door of a restaurant or hotel in Sicily tells you the establishment does not pay extortion money to the Mafia. The Kitchen Sisters hide caption 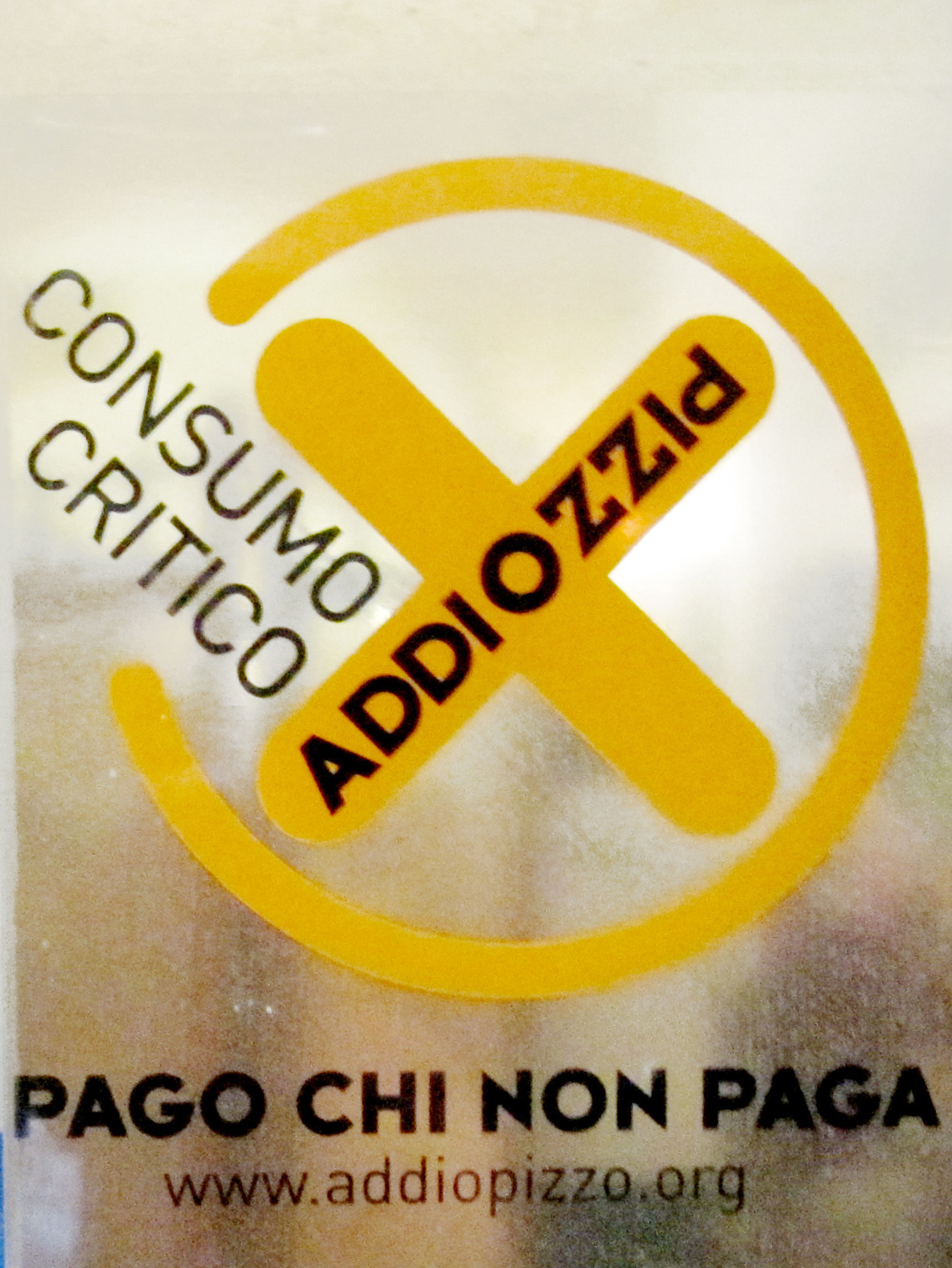 The Addiopizzo sticker on the door of a restaurant or hotel in Sicily tells you the establishment does not pay extortion money to the Mafia.

"In Palermo, currently 70 to 80 percent of shopkeepers pay a form of extortion, they pay for protection, they pay the pizzo," says Libera Terra leader Galante. "The idea of the Addiopizzo movement is to say 'no' to the pizzo. Farewell pizzo."

The anti-pizzo movement began in 2004 when a group of anti-Mafia student activists decided to open a café in Palermo and began questioning what they would do if the Mafia came around, asking for pizzo.

They began printing out little stickers that they put on lampposts and store windows and curbstones all over the city. All of a sudden hundreds of these stickers appeared throughout Palermo and nobody knew where they came from. The stickers read: "The people who pay the pizzo are a people without dignity."

Today the Addiopizzo symbol is on the doors of businesses throughout Sicily and you can chose to go to a restaurant or hotel and do business with businesses not involved in the Mafia.

A Museum To Remember

In Corleone, the small town immortalized in the film The Godfather, Walter Bonano is a guide at the Museum of the Anti-Mafia. "'Talk about the Mafia, no matter how,' " he says quoting Paolo Borsellino, a famous judge killed by the Mafia in 1992. "If I talk about Mafia I don't forget Mafia. And if I don't forget Mafia, it's very hard for me to commit the same mistakes."

The young, red-headed tour guide points to a photograph of the last of the godfathers, Bernardo Provenzano, from Corleone. His former house is a now a shop where they sell tomatoes from the fields he once confiscated. "It is a symbolic thing," says Bonano. "We are taking back what they stole."

For Libera Terra, each of the organic, pizzo-free products they sell in grocery stores throughout Sicily is a reminder. They have a wine called Centopassi dedicated to Peppino Impastato. They have another wine called Placido Rizotto, named for a peasant and trade union leader in Corleone assassinated by Mafia bosses in 1948.

"When you drink the wine," says Bonano, "it's a way to remember the work of these young heroes killed by the Mafia. It's a very symbolic thing. Maybe from an economic point of view Libera Terra is not a big business, but I like the symbolism of it. "