Accessibility links
Why Take-And-Bake Pizza Is Giving The Tax Guys A Headache : The Salt These days more and more foods are straddling the line between prepared and unprepared, taxable and nontaxable. And that leaves policymakers with a strange conundrum: what to do about pizza. 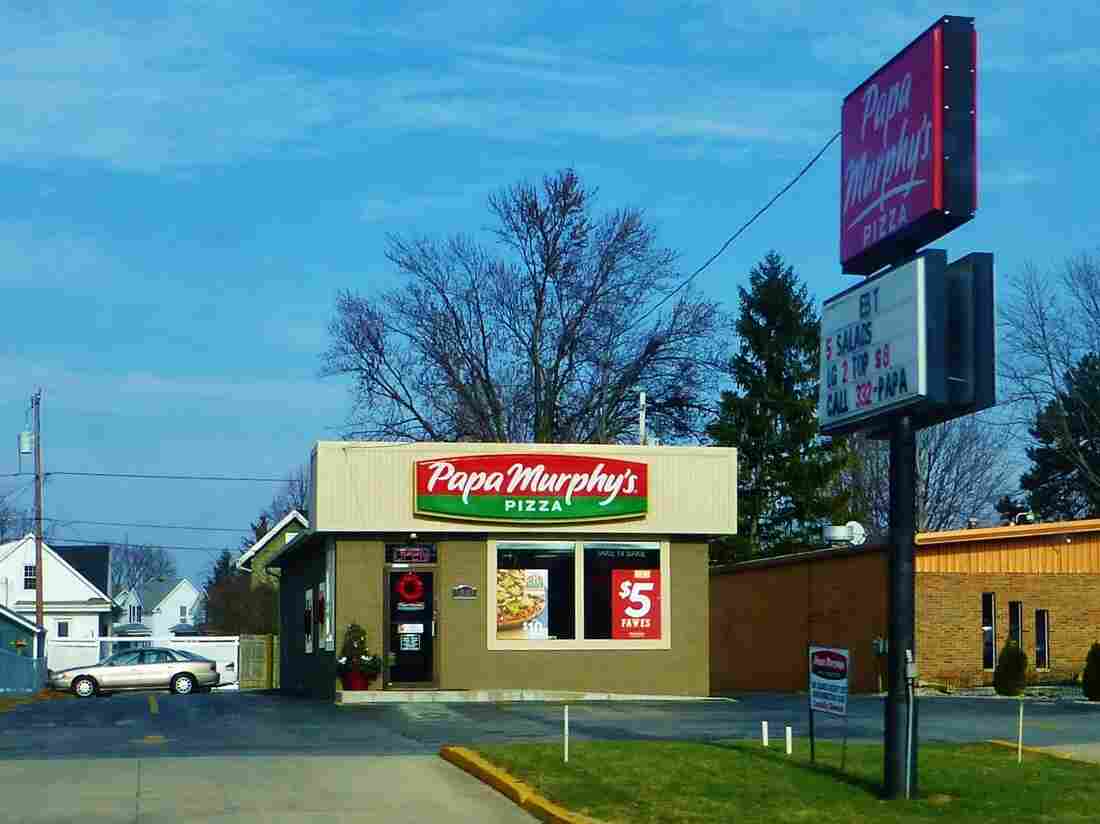 Papa Murphy's is a chain that sells take-and-bake pizza. It built its name on low prices, and a willingness to accept food stamps. But now that may be in jeopardy. Nicholas Eckhart/Flickr hide caption

In 24 states, a Hershey bar is candy but a Twix is not. That's because a Twix contains flour, and in those states — which all share a sales tax code — candy is defined as being flour-free. And since groceries aren't taxed, you'll pay tax for the Hershey but not for the Twix.

If that seems strange, consider the case of take-and-bake pizza — uncooked pies you take home and bake later. Take-and-bake is at the center of an ongoing tax-code debate. Many states consider it a grocery item, like eggs or flour. But now they're re-evaluating whether take-and-bake should be tax-free.

Patty's Pizza in Los Angeles sells take-and-bake mostly wholesale, to places like grocery stores and hotels. But you can still stop in for just a pie or two.

Val Everett stops in to grab a barbecue chicken pizza and a pepperoni pizza on her way home from work.

That's an even $16 — no sales tax. In California and many other states, take-and-bake pizza is considered a grocery item like eggs or flour, so it's not taxed.

Everett didn't know that she wasn't being taxed on her pizza. Like most people, sales tax isn't something that is on her mind very often. But she says that the dollar or two saved does matter to her.

Some of you are thinking that a buck more or a buck less per pizza isn't that big of a deal. But multiply that by the 3 billion pizzas sold in the U.S. each year, and it adds up to a lot of dough.

And if you have food stamps, you can only spend them on food that isn't charged sales tax. All of that adds up to savings for the cost-conscious. And a whole lot of business for some pizza shops.

Papa Murphy's, the supersize chain version of Patty's Pizza, has locations in 37 states, most of which don't tax take-and-bake.

The company built its name in part on low prices and a willingness to accept food stamps. But now that may be in jeopardy. It started last year when a tax lawyer named Mike Herald got a call from a Papa Murphy's franchise owner with a question.

"I had a franchisee call up to see if the pizzas were taxable in Wisconsin," he says.

Herald called around, but nobody had a clear answer. It was made in store, but you definitely couldn't eat it right away — unless you like raw dough.

Wisconsin bounced the question up to the Streamlined Sales Governing Tax Board, a group that hashes out sales tax code for Wisconsin and 23 other states, including New Jersey and Ohio.

But that's not always easy. Issues like take-and-bake pizza and what constitutes a candy bar have been giving tax guys headaches for years. The problem is that more and more foods are straddling the line between prepared and unprepared, taxable and nontaxable.

That's why groups like the Tax Board have to try to keep that line clear, says Kirk Stark, a law professor at the University of California, Los Angeles — even when that means saying things like a Twix bar isn't really candy.

"In some ways the line that they are being asked to draw is an indefensible line," he says. "As a result, we get these zany, incomprehensible distinctions."

"The theory there was you were more likely to be using small marshmallows in baking; large marshmallows were more in the nature of candy or a treat, and those were taxed," he says.

Without a complete overhaul of how sales tax is applied to food, issues like these are just going to keep coming, Stark says. As for take-and-bake pizza, the Tax Board is set to offer its recommendations later this week.