Accessibility links
Gardeners' Gems: Designer Crops That Will Wow The Neighbors : The Salt For the fashion-conscious gardener, here are the most colorful and flavorful new edibles. This year's picks include the indigo tomato, wasabi and a pineapple-flavored berry. 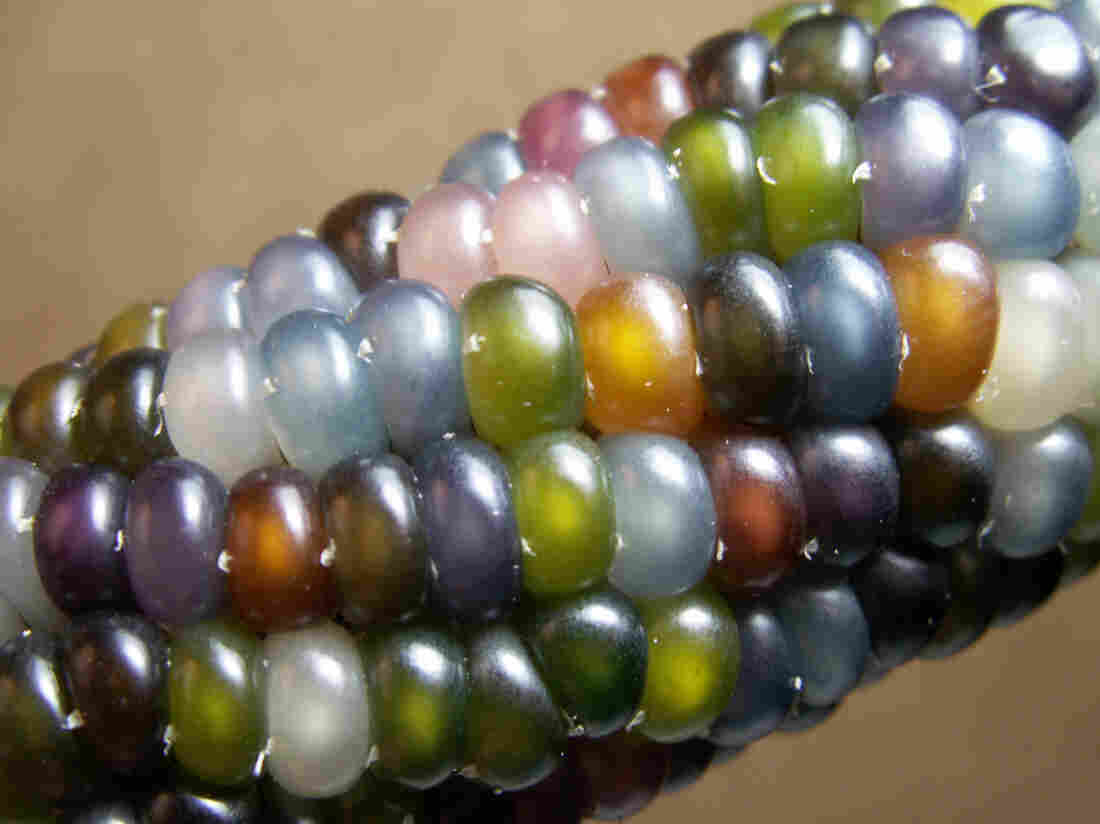 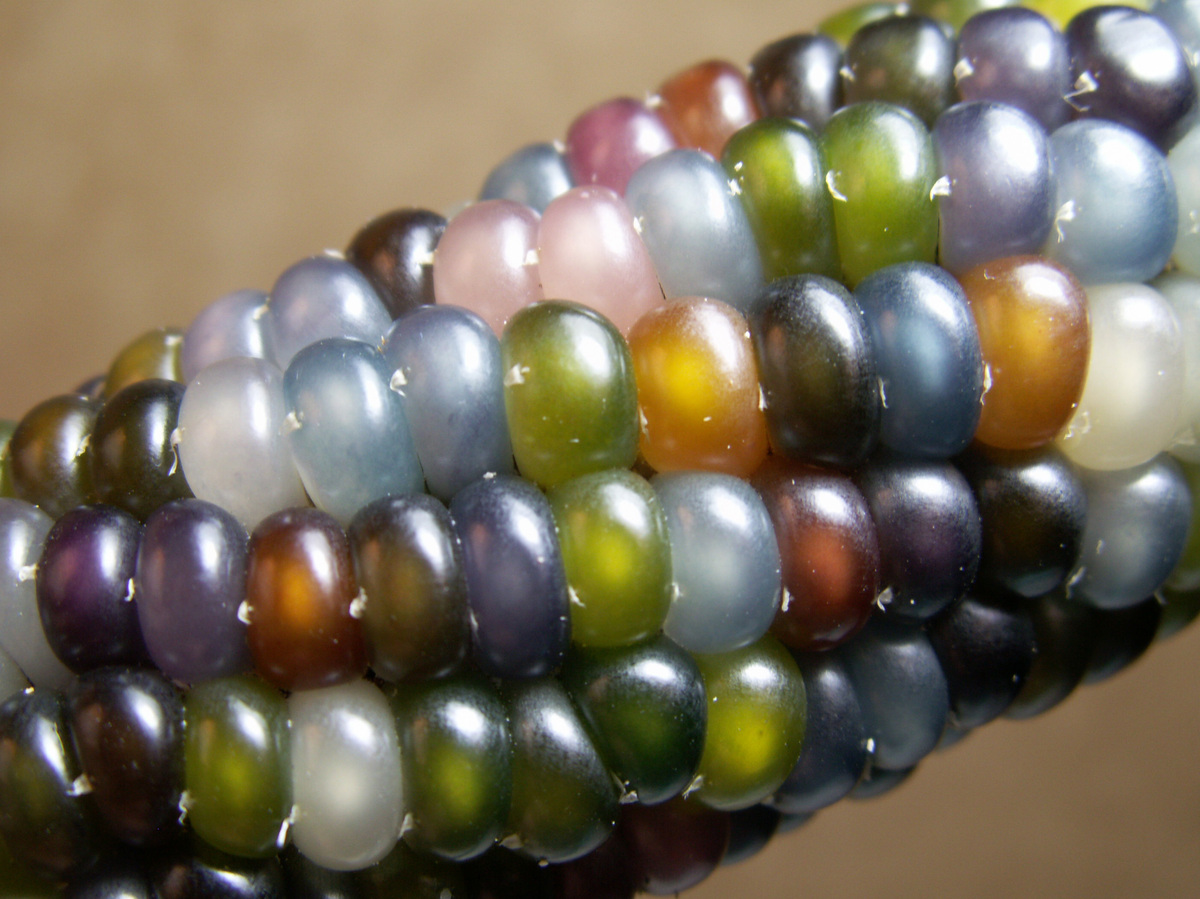 The nearly translucent Glass Gem Corn looks more like a work of art than a vegetable.

To the home gardener who says "been there, done that" to the heirloom green bean, the French breakfast radish or the Brandywine tomato, take heart.

Nurseries and seed companies are competing to bring you the most colorful and flavorful designer edibles they can come up with. They travel the world looking for the next in-vogue plant for the home horticulturist. Every few years they introduce these new chic varieties in their catalogs and websites.

Alice Doyle, a founder of Log House Plants, a wholesale nursery for classic and unusual plants, says some of her customers are like wine connoisseurs who are always seeking the next best thing.

On Your Mark, Get Set, Grow: A Guide To Speedy Vegetables

"It's the joy of the hunt," she says. "The nuances, the different flavors and different things you can do with [plants] and enjoying how they grow — it's all fun."

Here are our top picks for the most seductive edibles available for the home gardener this season:

Glass Gem Corn: This corn became a rock star in 2012 when the photo posted on Facebook went viral.

And it's clear why: The translucent rainbow kernels look more like Swarovski crystals than food. But how did these brilliant kernels come to be?

The story begins decades ago with Carl Barnes, a part-Cherokee farmer and breeder in Oklahoma who started crossing different Native American corns for beauty. He chose vibrant, translucent colors and eventually ended up with Glass Gem Corn. One of Barnes' students, Greg Schoen, gifted the seeds to Native Seeds/SEARCH, a nonprofit seed conservation group, in Tucson, Ariz.

There are thousands of varieties of corn, and NS/S banks more than 500 varieties. Melissa Kruse-Peeples, conservation program coordinator for the group, sees the visually stunning Glass Gem as a way to pique interest into maize's diversity.

"We really see it as a gateway corn that introduced a lot of people who think of corn as just corn on the cob, not realizing there's such diversity and many different beautiful varieties of corn," she says. This is a flint corn, not a sweet corn, so you can't eat it like a corn on the cob, but you can dry it and pop it for popcorn or grind it for polenta or cornbread. 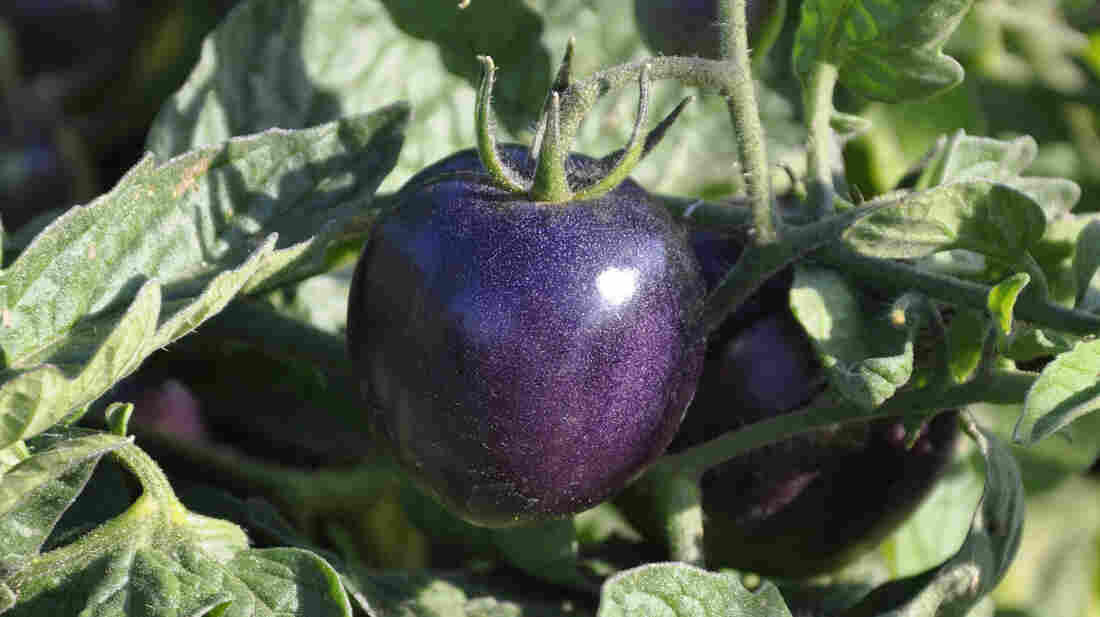 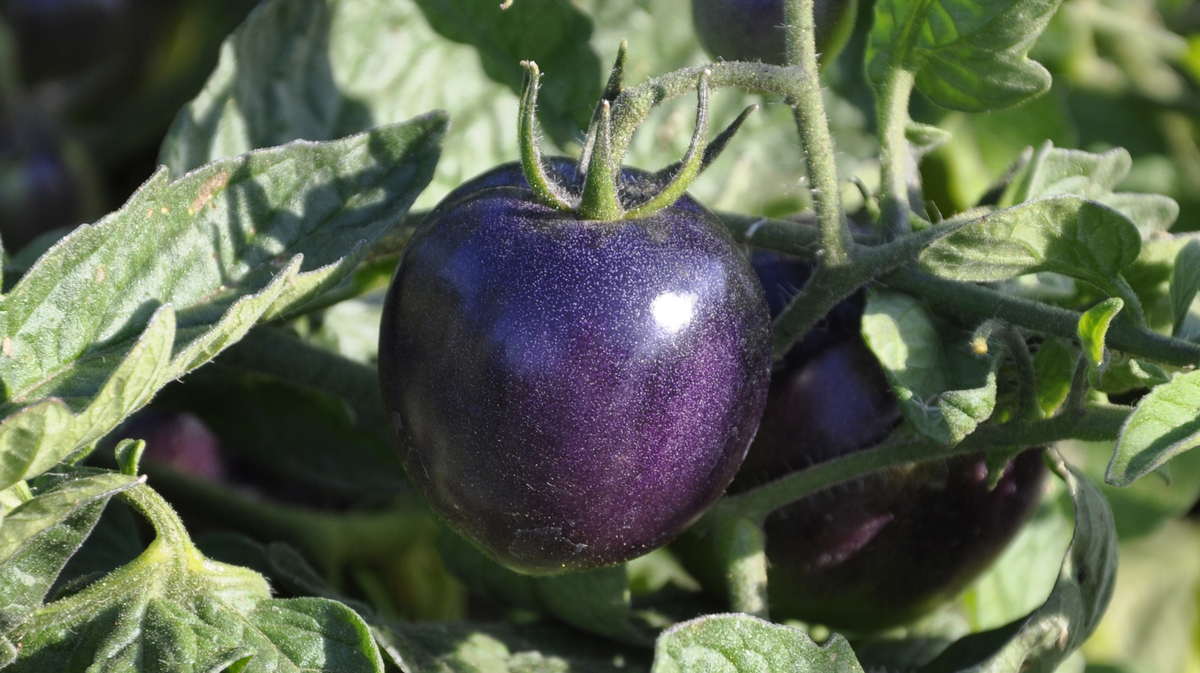 The Indigo Rose tomato was developed by Jim Myers, a vegetable breeder at Oregon State University.

When the corn exploded on the Web, the small nonprofit couldn't keep up with demand for the seeds. Just over a year ago, the waiting list mushroomed to 7,500 people. Over last year's growing season, NS/S was able to grow lots more, so now customers can buy as many seed packets as they like. Since it's been available, NS/S has sold around 10,000 packets.

Indigo Tomatoes: Yes, you can now grow a blue tomato if you so desire, thanks to breeders' recent successes with anthocyanin, the compound that gives blueberries and eggplants their dusky hue.

Jim Myers, a professor in Oregon State University's horticulture department, started working on indigo varieties more than a decade ago with genetic material from wild tomatoes from Chile and the Galapagos Islands. The indigos have an entirely different gene from the black and purple tomatoes like the Black Krim or the Cherokee Purple, which get their pigmentation from another compound, called pheophytin.

The indigo tomatoes might even be better for you, thanks to the anthocyanin, which is also a flavonoid. "We've shown they have higher antioxidant potential, which is associated with health benefits," Myers said. The Indigo Rose was the first indigo tomato variety available, but some growers were frustrated by the 90-day wait for the tomato to ripen. The newly released Indigo Pear Drops and Indigo Cherry Drops take only 70 days to fully ripen — perfect alternatives for the impatient gardener. 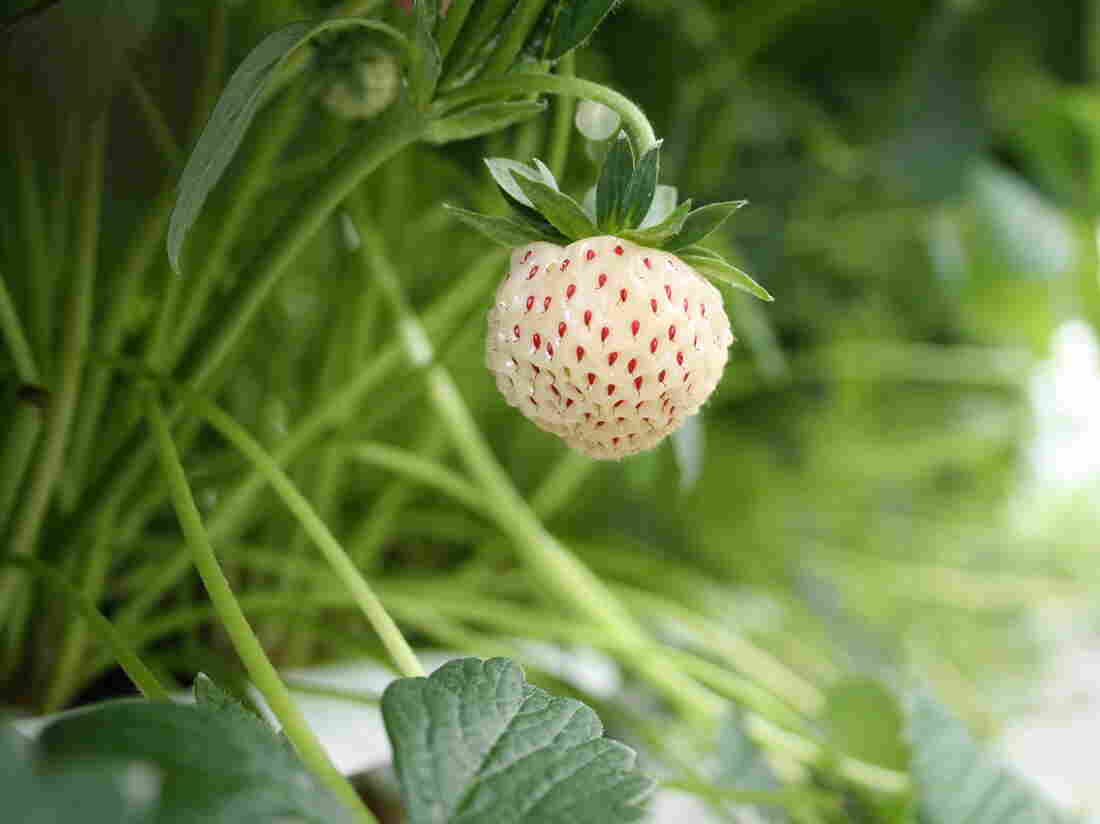 The pineberry first appeared in the 1750s in Europe, as a cross between an American wild strawberry and a Chilean strawberry. Courtesy of Nourse Farms hide caption 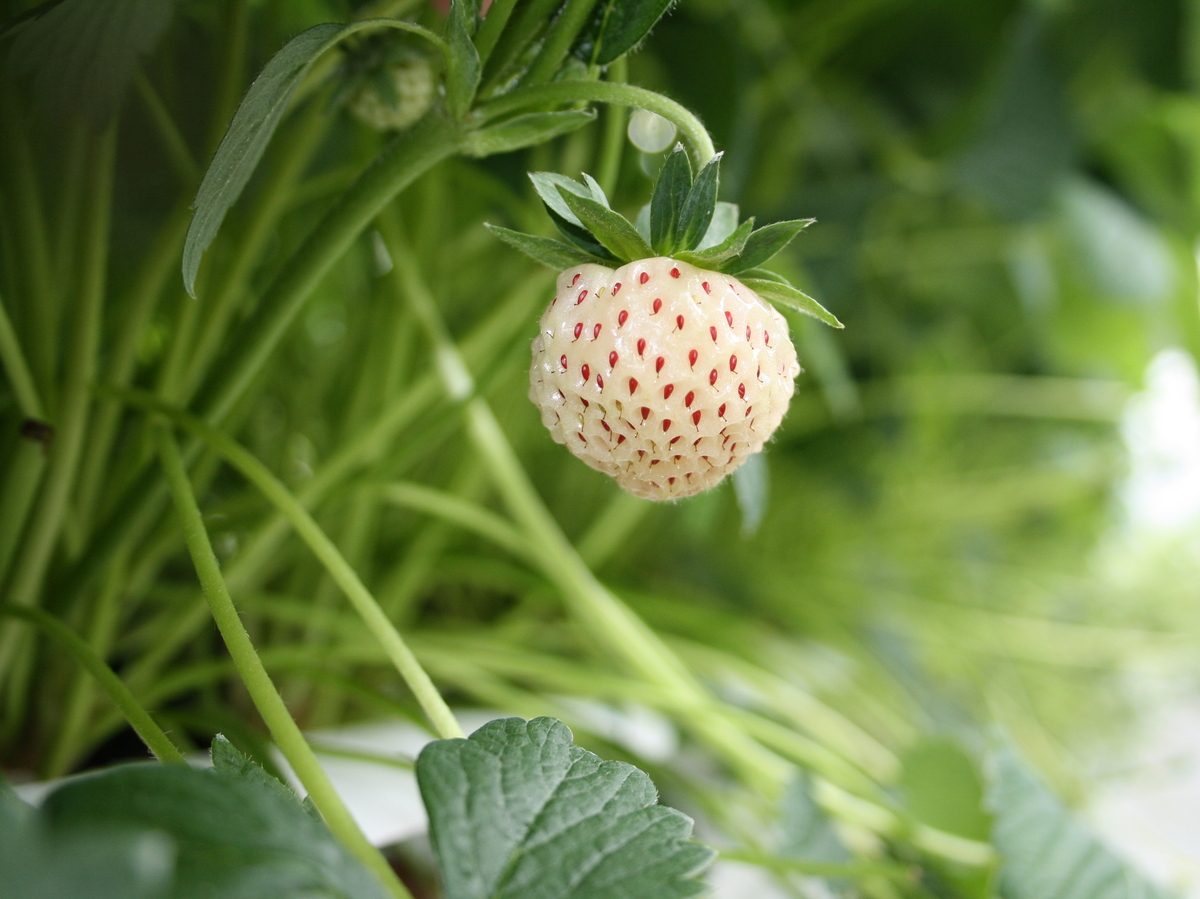 The pineberry first appeared in the 1750s in Europe, as a cross between an American wild strawberry and a Chilean strawberry.

Pineberries: The dramatic color contrast of the pineberry, or pineapple strawberry, gives these berries an otherworldly look. But this variety, which has notes of pineapple flavor, has been around for hundreds of years.

The pineberry first appeared in the 1750s in Europe, as a cross between an American wild strawberry and a Chilean strawberry. But it was a poor producer and thus on the verge of extinction. Then, in 2003, Dutch strawberry breeder Hans de Jongh stepped in and began to transform it into a stronger, more productive plant.

The pineberry started showing up in British grocery stores about four years ago. Now, the plants of that Dutch-bred fruit are available for the first time in the U.S., from Massachusetts-based Nourse Farms.

"When the plants start blooming, growers will notice the flowers seem just a little whiter than a regular strawberry," says Tim Nourse. He explains this is because this particular variety doesn't have pollen sacks, meaning it needs another strawberry plant to pollinate it.

Other pineberry varieties are available from Burpee, Hirt's Gardens, Perennial Feast and Cook's Garden. You can nosh on them straight off the plant or use their pineappley taste to accentuate desserts. 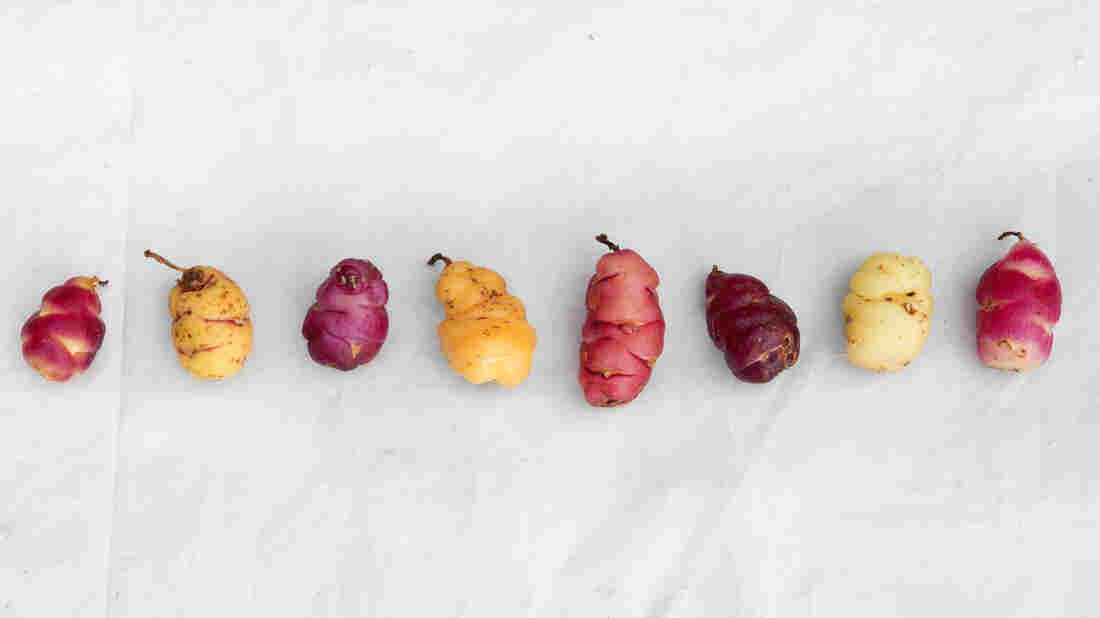 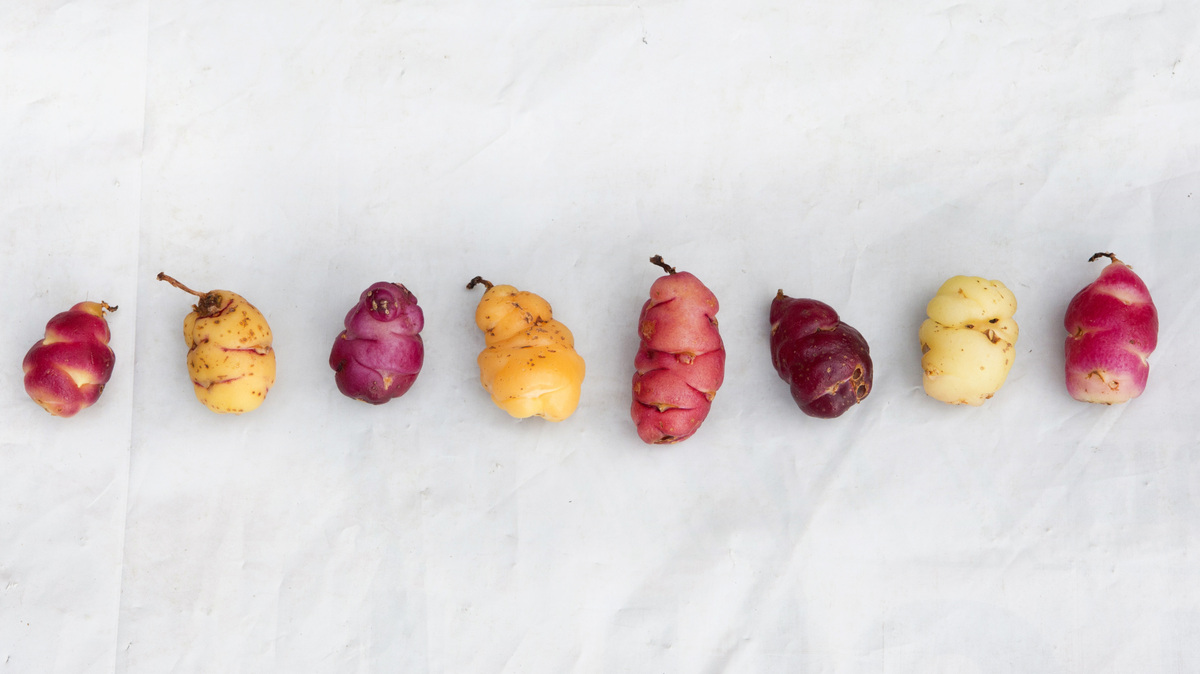 Oca: This stubby tuber native to Bolivia and Peru is an important food staple in the Andean highlands. And it comes in a dazzling rainbow of colors — from bright pink to dark red to light yellow.

The tubers are planted in spring and harvested in fall. "You can grow it as a really pretty perennial plant, but then you can harvest it at the end of the season," explains Doyle of Log House Plants, which grew several varieties for retail nurseries this year.

She says you can eat the clover-shaped leaves, as well as the roots. When eaten raw, the different varieties conjure up flavors like celery, chestnut or apple. They can also be boiled like potatoes or cut and fried into french fries. 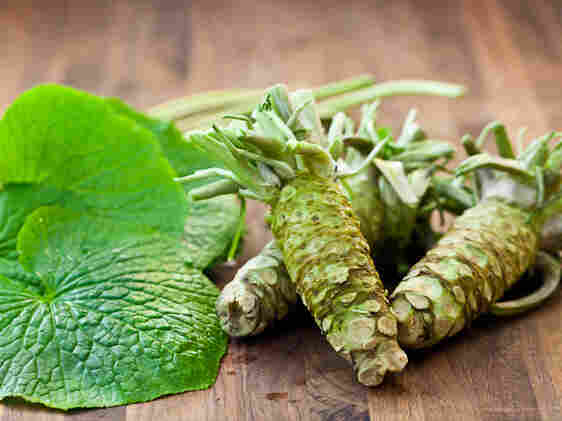 This wasabi doesn't have to grow in moving water; it just needs a semi-shaded space. Valleybrook Gardens/Flickr hide caption 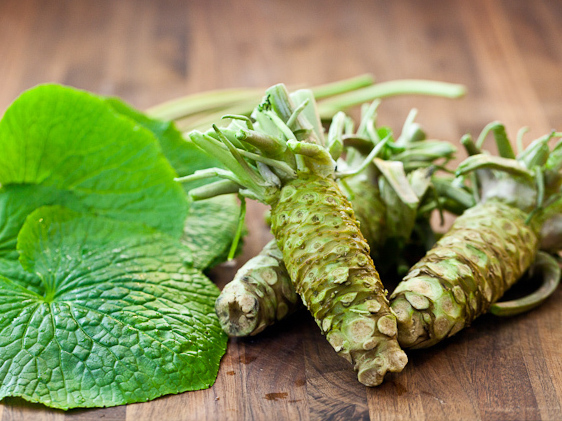 This wasabi doesn't have to grow in moving water; it just needs a semi-shaded space.

Wasabi: We know that little dollop of green paste from the sushi restaurant, but it often contains more horseradish and green dye than any actual wasabi root. Real wasabi, a greenish root with heart-shaped leaves, is in the same Brassica family as cabbage, radishes and broccoli, and can go for $100 per pound stateside.

Researchers Carol Miles and Catherine Chadwick with Washington State University's extension service decided to see if the root, which is sometimes grown in running streams, could be adapted to the backyard garden. They worked with 20 different cultivars of Wasabia japonica and found one that does the backyard trick.

The good news is it doesn't have to grow in flowing water; it just needs lots of water and a semi-shaded space. Their Wasabia japonica Daruma was offered for the first time on the Territorial Seed website and it was a huge success in its inaugural year. The bad news is that the limited supply of 990 plants sold out much faster than expected. But Territorial Seed says it hopes to have a larger quantity available for the 2015 season, and will start taking orders in December 2014.