Accessibility links
Introducing Roma Cuisine, The Little-Known 'Soul Food' Of Europe : The Salt There's a long history of prejudice against the Roma people in Europe. A non-profit in Slovenia is hoping to diffuse it by launching a restaurant serving the tastiest of the traditional Roma dishes. 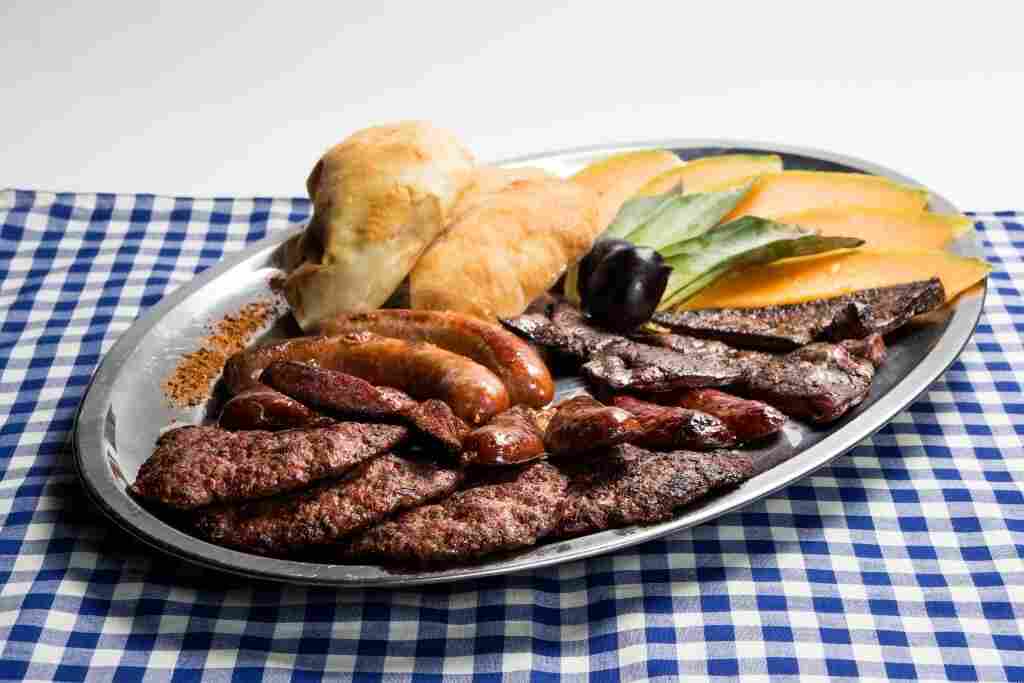 It's no secret that tensions surrounding the Roma people in Europe are running high these days.

Earlier this year, when restrictions on Romanians and Bulgarians who wanted to work in other EU countries were lifted, some were dismayed. Their concern: That it would be easier for the Roma — the people often called "gypsies" who've stereotypically been associated with poverty, crime and illiteracy — from these countries to move through Western Europe freely in search of jobs.

But the tensions have also prompted a new conversation about an overlooked aspect of Roma culture — the food.

Why Slovenia? About 12,000 of the small country's two million inhabitants are Roma. With more than 3,000 Roma, Maribor – Slovenia's second-largest city — has the biggest concentration of Roma in the country. As is the case with many countries in Europe, the Roma have long been ostracized here.

"Slovenians have a lot of stereotypes, prejudices about Roma community," says Simon Simoncic, the restaurant's project manager. "Roma culture is different from us. Of course some of their habits we can't understand, but coherence and coexistence is ... a fact nowadays. So Romani Kafenava is one [way] to break stereotypes." 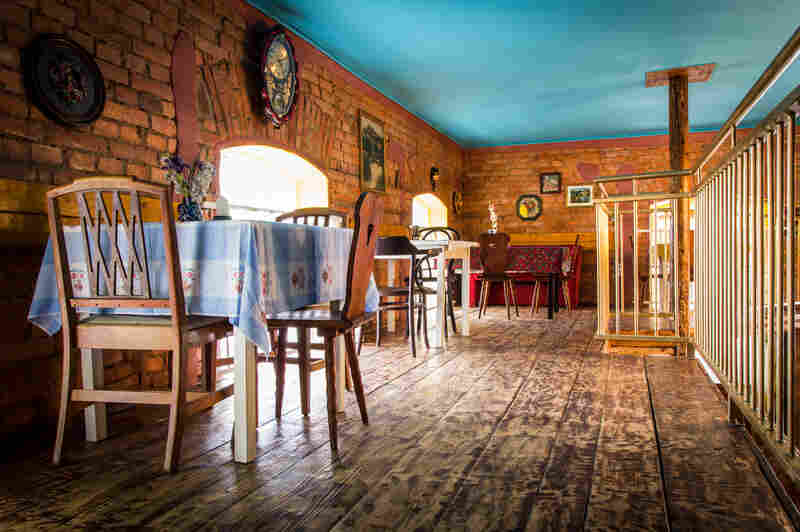 Simoncic, works for EPeKa, the Slovenian NGO. He pitched the idea for the eatery to the group after attending a Roma wedding.

"I tried the food and it was magnificent," he says.

The Roma people are a single ethnic group originating long-ago from India, and have since dispersed widely across Europe. Over time, the Roma have evolved into smaller groups, each with its own set of culinary and other customs. The Roma in Maribor are Muslim, a religion passed down from the days the Turks ruled the region, so the restaurant doesn't serve pork.

The dishes at Romani Kafenava hail from the Balkans — and more specifically Kosovo, Macedonia and Serbia. The eatery serves a lot of grilled and baked meat and vegetables, often spiced with paprika and chili. And there's a bit of a Mediterranean influence; stuffed peppers and grape leaves are mainstay.

"Roma food is made from cheap ingredients and natural ones. So the food is really not expensive," Simoncic says. A typical entrée costs about $5.

On weekends, Romani Kafenava's staff cook on an open fire in a more traditional fashion.

Djevrija Mazrek, one of the restaurants cooks, was unemployed for 20 years before Romani Kafenava hired her. She has no formal education, but does have "practical knowledge," Simoncic says. 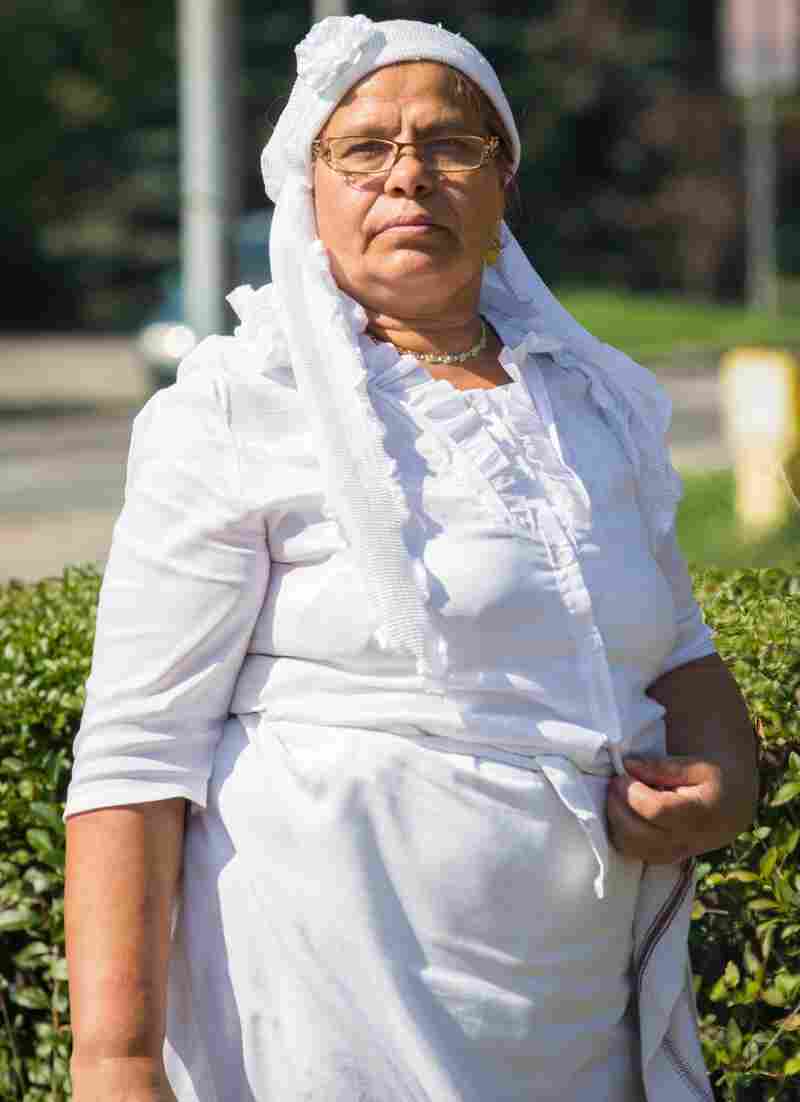 Mazrek, who has three kids and nine grandkids, says her husband is unemployed and can't collect a pension for two more years. "The economic crisis is a big one in my family."

Mazrek says her favorite dish at Romani Kafenava is the janija, a tomato-based beef and vegetable stew eaten with bread.

While dishes like janija are similar to regional Balkan fare, Roma food is still distinct.

"Roma food deserves attention," says Ian Hancock, a Roma scholar, author and professor at the University of Texas at Austin. "You can equate it with the emergence of soul food in this country. Soul food was poor people's food and it has become fashionable."

Hancock says the concept of a Roma restaurant is not new – there are many small, family-run businesses elsewhere — but that this one takes a fresh approach on a larger scale.

"It's a Roma restaurant for non-Romani clientele," Hancock says. "What's on the menu are traditional dishes gussied up a bit for a non-Romani palate."

While the restaurant is bringing in money — Hancock says there was a line out the door on opening day — a combined $418,000 grant from the European Social Fund and the Slovenian government is footing the start-up costs. But Romani Kafenava is aiming toward a self-sustaining system by August 2015, which marks the end of the grant. 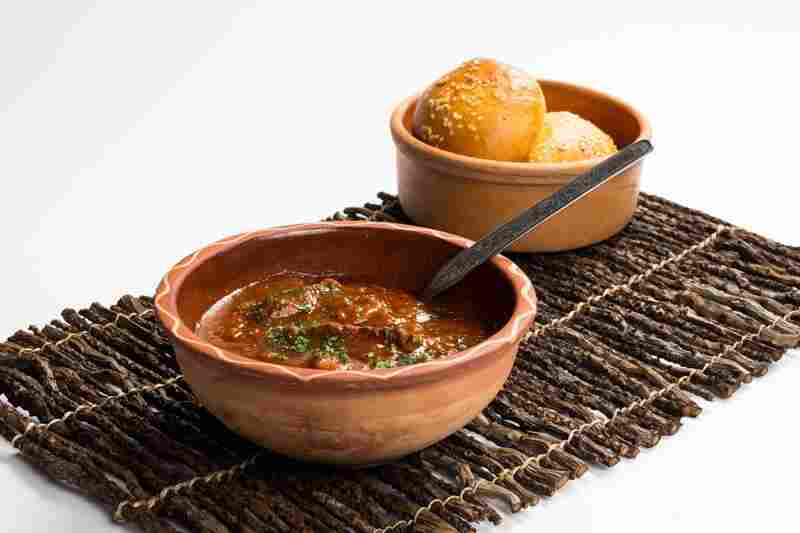 Janija, a tomato-based beef and vegetable stew that is eaten with bread, is one of cook Djevrija Mazrek's favorite dishes. Matej Kristovic/Courtesy of Epeka hide caption

For now, it's focusing on drumming up business by creating tasty dishes and training a largely unskilled wait staff, the majority of whom are Roma.

All of the restaurants' employees were previously unemployed, many are young, and most are unskilled – many have never held a job. In these jobs, they make about $6 an hour, on average.

Simoncic says he hopes people from various parts of the local community will "get to know each other and start to communicate" through this restaurant.

But the launch of the restaurant hasn't been free of problems. Initially, there were neighborhood protests hoping to thwart the effort. In November, there was a local push to designate the restaurant's intended space for another purpose.

"Slovenians are thinking Roma people ... will play loud music, have parties, kill sheep in front the restaurant," says Simoncic. But tensions have calmed, he says, and the business is running fine.

Simoncic is also hoping for a possible expansion into other countries, like France. "They have good cuisine, a lot of Roma people and nice culture!"