Accessibility links
'Fed Up' Portrays Obese Kids As Victims In A Sugar-Coated World : The Salt A new documentary argues that the food industry and government policies have pushed too much sugar on children and caused the childhood obesity epidemic. But the industry says society is to blame. 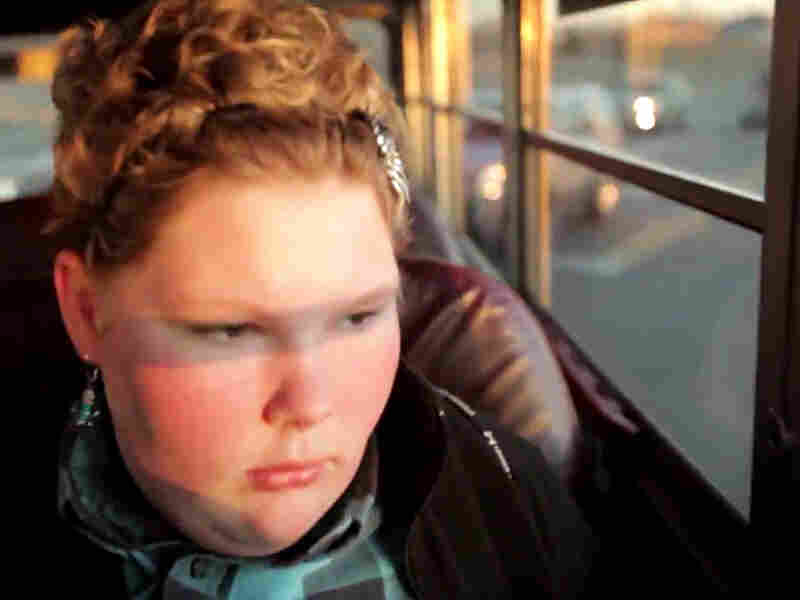 The true stars of the documentary film Fed Up are several children — including Maggie Valentine, 12 — who are trying to lose weight. YouTube hide caption 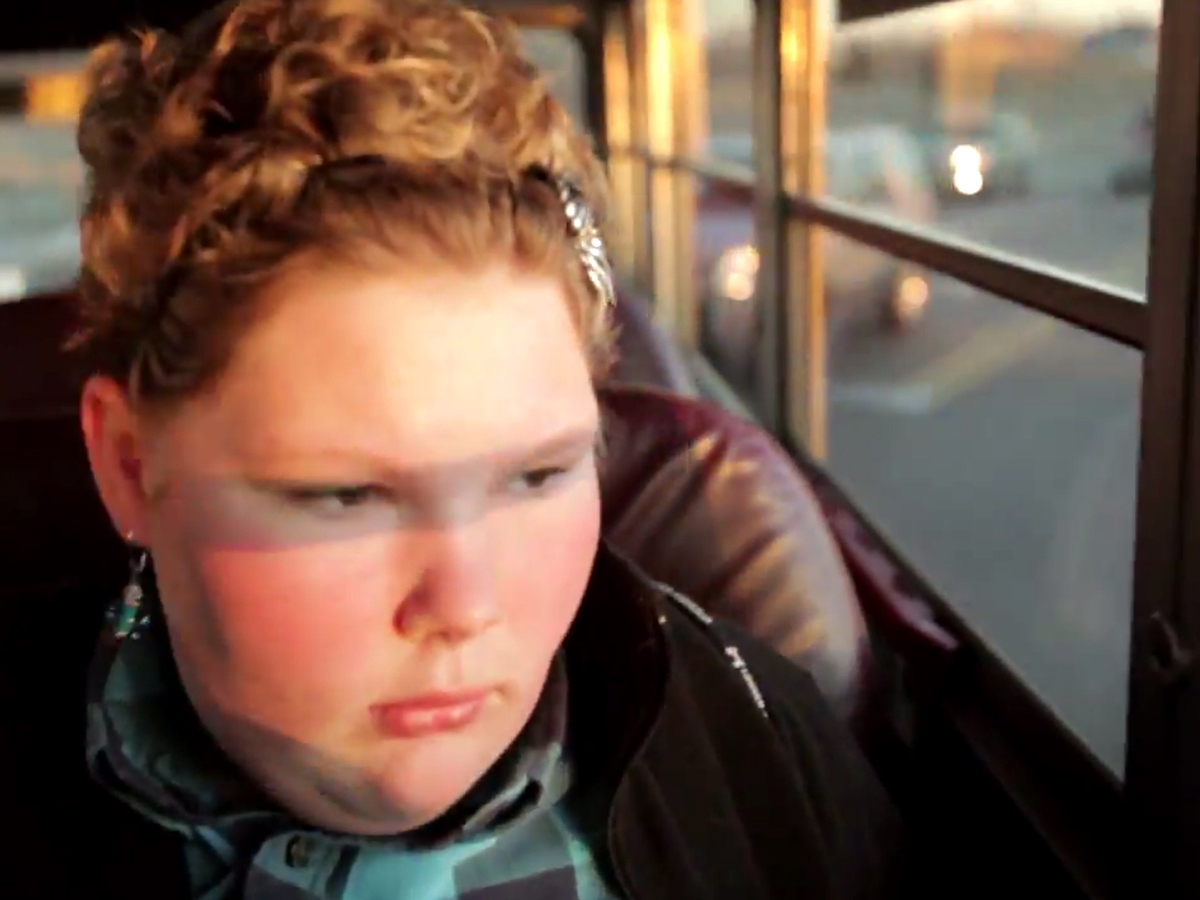 The true stars of the documentary film Fed Up are several children — including Maggie Valentine, 12 — who are trying to lose weight.

Just who's to blame for the childhood obesity epidemic? Over the years, the finger has been pointed at parents, video games, Happy Meals and the hamburgers in the school cafeteria.

A new documentary, Fed Up, alleges it all boils down to a simple substance most of us consume every day: sugar. The pushers of "the new tobacco," according to the film, are the food industry and our own government.

With a mix of dramatic music, scary soundbites and powerful images of kids injecting insulin into their chubby tummies, Fed Up argues that the children are not to blame. For the rising number of overweight and obese kids, the mantra of "eat less, move more" is an impossible goal. They simply can't circumvent the onslaught of marketing that has made them into junk-food junkies, the film says.

"What if our whole approach to this epidemic has been dead wrong?" the film's narrator, TV journalist Katie Couric, says in the film's opening.

Hoping to do for childhood obesity what An Inconvenient Truth did for climate change, Fed Up takes on the U.S. Department of Agriculture, first lady Michelle Obama's "Let's Move" campaign and Big Food: Coca Cola, Nestle, Kraft and Kellogg, to name a few. Laurie David, who produced the Oscar-winning An Inconvenient Truth, is executive producer along with Couric; Stephanie Soechtig is the director.

The film sometimes resorts to hyperbole to describe the obesity epidemic and its related health costs, but the message is backed up with sobering statistics and the history of the policies that got us here.

Childhood obesity rates have grown exponentially in the past 30 years. And they've tracked with the huge increase in sugar added to packaged food to make it "hyper-palatable," as one scientist says, during the low-fat craze of the 1980s and 1990s.

But the film's true stars are several overweight children who are trying — and failing — to lose weight. It's heartbreaking to watch as the kids tape private video diaries of their struggles, with fears of death and tears of frustration.

"I want people to know that childhood obesity isn't as simple as TV and press make it seem ... and even Mrs. Obama," says a tearful Maggie Valentine, a 12-year-old girl who weighs more than 200 pounds. "No matter how hard you try, it's always going to be an ongoing battle."

The food industry, which got a lashing from the film Food, Inc., is already fighting the message of Fed Up, despite its still limited release.

The loudest cry is coming from the Grocery Manufacturers Association, which has launched a website called Fed Up Facts that mimics the plate-and-menu graphics of the documentary's website. It claims, among other things, that childhood obesity rates have dropped by as much as 43 percent, and obesity rates overall have plateaued.

A spokeswoman for the Grocery Manufacturers Association, which is also the lead in fighting state's GMO labeling efforts, did not respond to The Salt's request for comment on the film.

The Center for Food Integrity, a Kansas City-based nonprofit that gets funding from dairy, soybean, poultry and pork producers and companies like ConAgra, Monsanto and Tyson, is also preparing to battle the message of Fed Up. The group's talking points and social media tips urge farmers to engage in what it calls "values-based discussions about today's food system."

Terry Fleck, executive director of the Center for Food Integrity, tells The Salt that the film errs in singling out sugar as the culprit in childhood obesity. And many companies like Nestle and General Mills are already reducing sugar in products like breakfast cereals, he says. 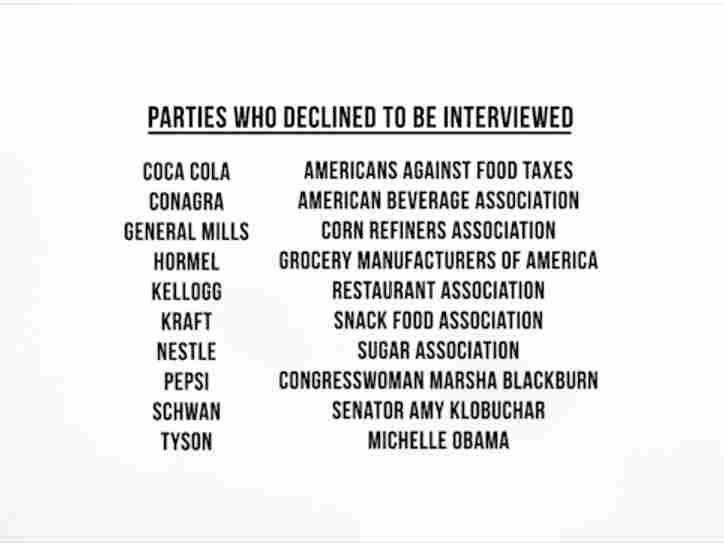 A list of individuals and organizations who declined to be interviewed by the filmmakers of Fed Up. Courtesy of Radius TWC hide caption 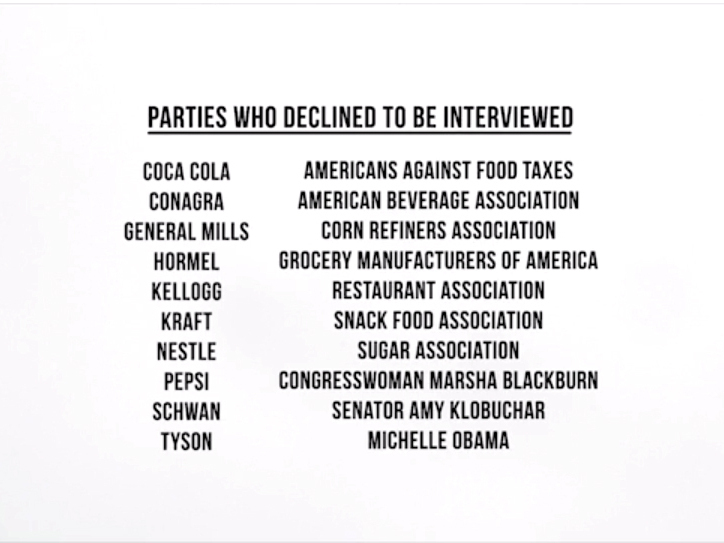 A list of individuals and organizations who declined to be interviewed by the filmmakers of Fed Up.

"Obesity is this reality that we are consuming more calories than we are burning off, and that's easy to do in our society," Fleck says. "The reality is we are a society that's busy. We want convenience foods. We drive everywhere. We don't walk like others in other cultures."

Michele Simon, a public health lawyer who appears in Fed Up, says it's becoming increasingly common for companies to create "front groups" to try to help shape the public discourse. She names the Center for Food Integrity as one such group.

"What's going on here is that the food industry has a credibility problem," Simon says. "So they funnel their money into these front groups that can look like they're doing this with the sheen of credibility — and sometimes even scientists — that are bringing the industry messages into the public discourse."

The public discourse, Simon says, is finally questioning whether individuals are to blame when it comes to childhood obesity. Fed Up will help that conversation, she says.

The film concludes with a list of the 20 companies, industry groups and politicians who refused to talk to the producers.