Accessibility links
The Vegetables Most Americans Eat Are Drowning In Salt And Fat : The Salt Potatoes and tomatoes are nutritious and delicious. But the U.S. Department of Agriculture finds that Americans tend to consume way too many of them in unhealthy ways, like french fries and pizza. 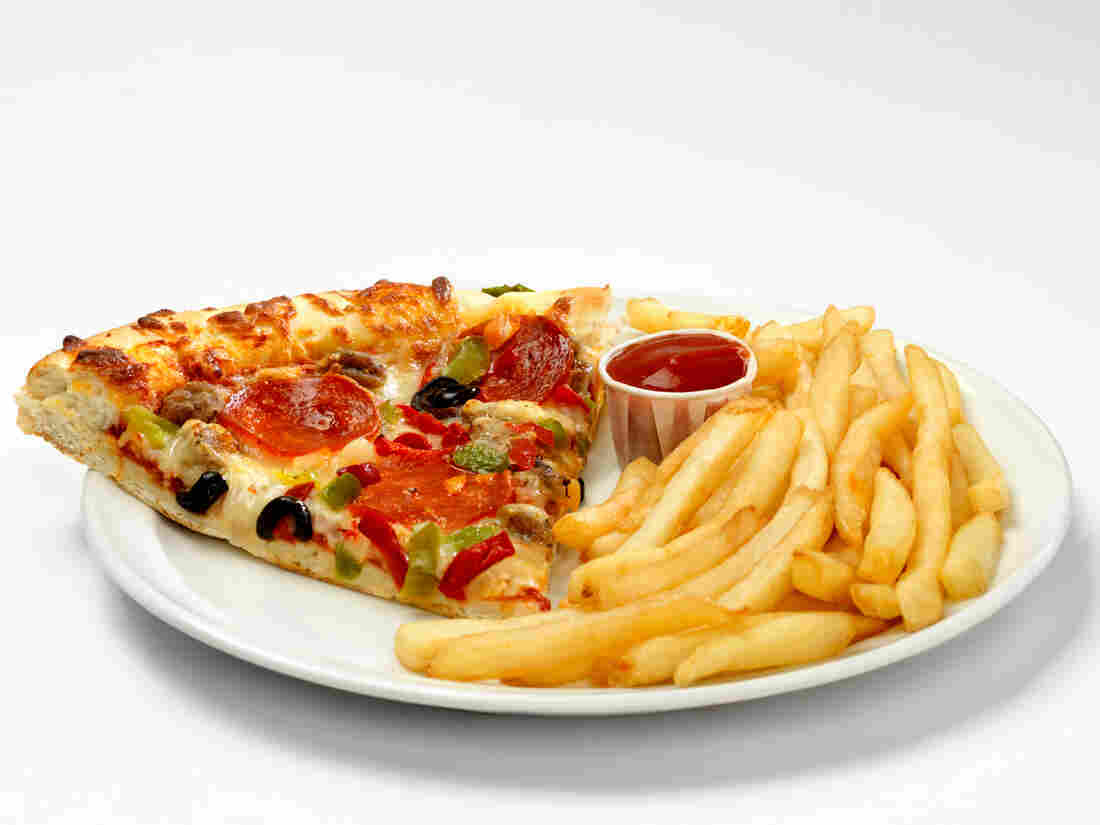 This isn't exactly what a healthy serving of veggies looks like. Lauri Patterson/iStockphoto hide caption 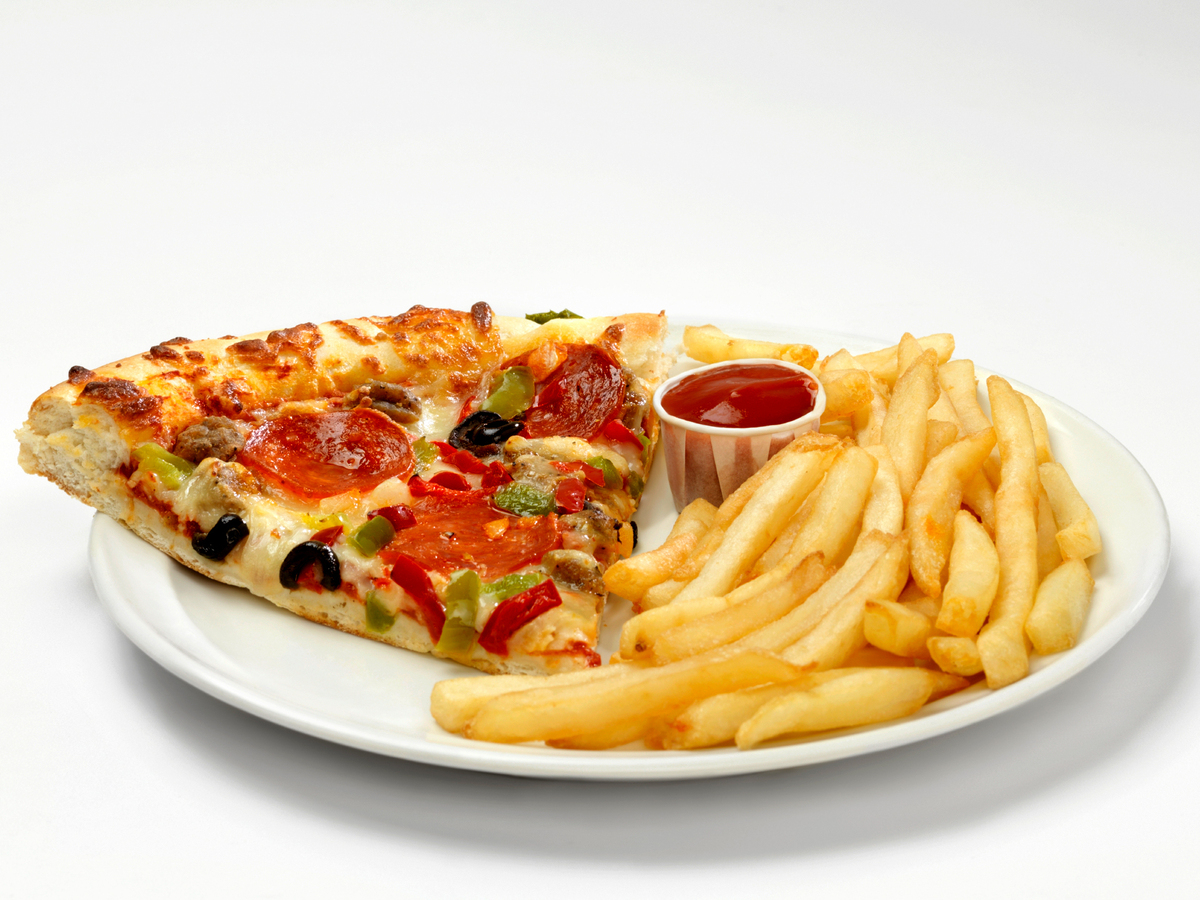 This isn't exactly what a healthy serving of veggies looks like.

Popeye and our parents have been valiantly trying to persuade us to eat our veggies for decades now.

But Americans just don't eat as many fruits and vegetables as we should. And when we do, they're mainly potatoes and tomatoes — in the not-so-nutritious forms of french fries and pizza, according to a report from the U.S. Department of Agriculture. 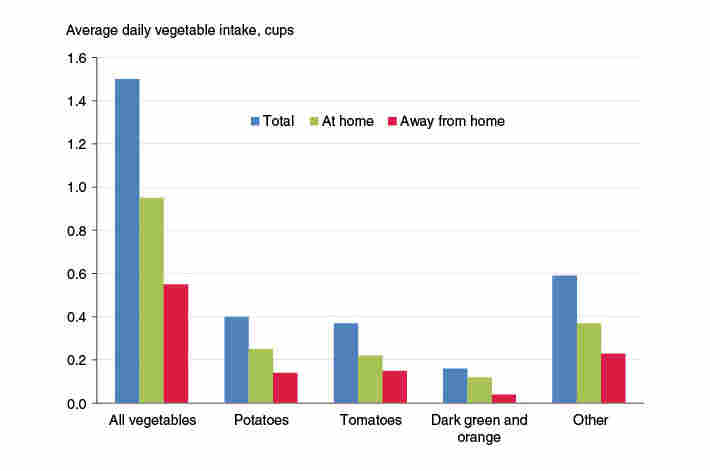 According to the USDA, potatoes and tomatoes are the most popular source of vegetables Americans consume. USDA hide caption 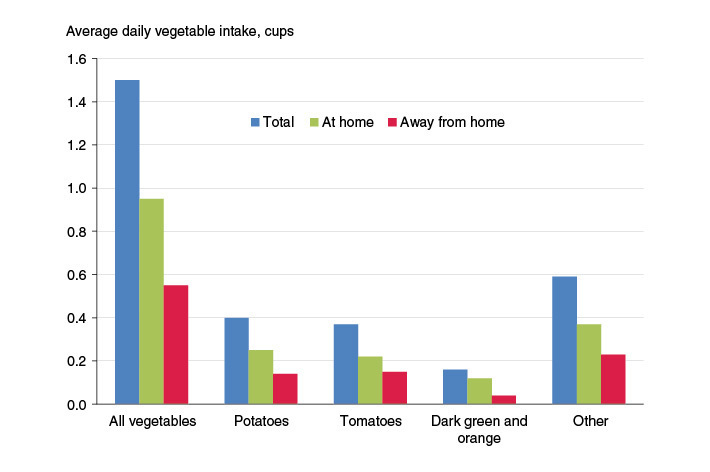 According to the USDA, potatoes and tomatoes are the most popular source of vegetables Americans consume.

Americans eat 1.5 cups of vegetables daily, on average, the USDA finds. But the national nutrition guidelines recommend 2 to 3 cups a day for adults. And more than half our veggie intake comes from potatoes and tomatoes, whereas only 10 percent comes from dark green and orange veggies like spinach, carrots and sweet potatoes.

Of course, potatoes are great on their own — they're a good source of potassium. But most Americans eat them with a hefty side of fat and sodium. According to the USDA's handy chart, at home, most people get their potato fix in the form of chips. And when eating out, about 60 percent of the potatoes we consume are fried. Baked potatoes are also popular, but most people don't eat the skin — a great source of fiber that fills you up. 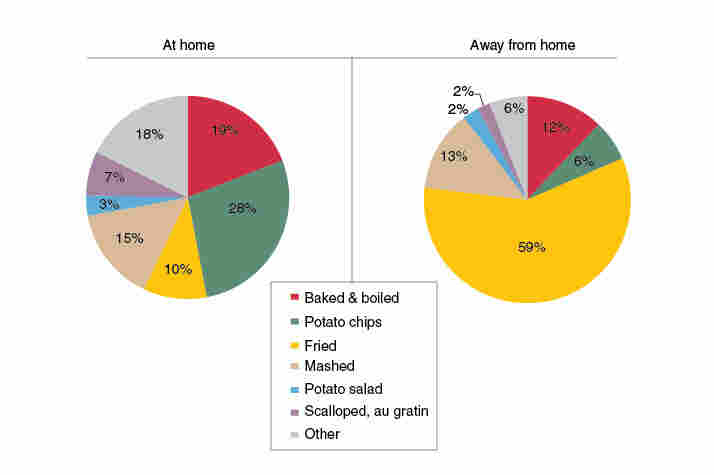 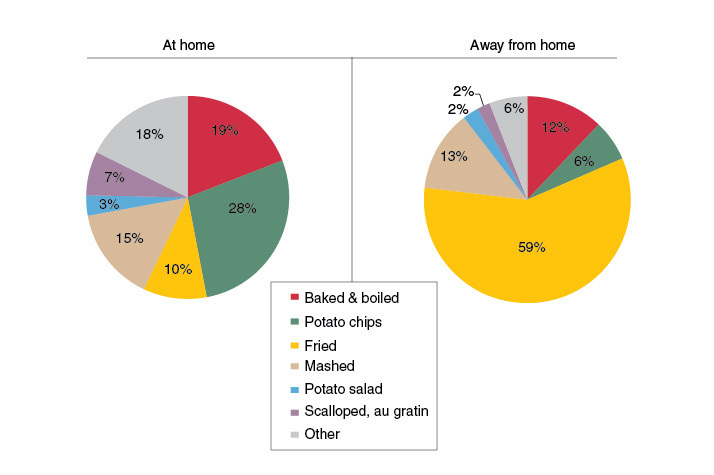 How the average American consumes potatoes.

Tomatoes start out healthy as well, and they're a good way to boost your vitamin A and C intake. Tomato sauce, on the other hand, can pack in a lot of hidden sugar and salt. While a cup of raw tomato has about 9 milligrams of sodium, canned tomato sauce can contain more than 1,000 milligrams of sodium per cup, according to the USDA.

And even potatoes and tomatoes in their healthy forms don't make for a complete, balanced diet. Americans eat far less fiber than they should, the researchers say, and fiber is found in dark green and orange veggies. As we've reported, fiber can make you gassy, but it's essential to a healthy microbiome.

After a 2002 government nutrition report found that higher fruit consumption correlated with a lower body mass index but not vegetable consumption, USDA researchers decided to look more into how Americans are getting their vegetables.

"We started thinking about it, and realized it's quite common to just pick up a piece of fruit and eat it as-is," says Joanne Guthrie, a nutritionist at the USDA's Economic Research Service who co-authored the report. "But that wasn't the case for vegetables." Vegetables often need to be peeled, cut and cooked, so they're just not as handy.

So maybe this tomato and potato finding isn't a huge shocker. Just a few years ago public health experts were debating whether school lunch programs should get to count a slice of pizza as a serving of vegetables, and fries have garnered their share of negative publicity in recent school lunch battles, too.

But, as Guthrie tells The Salt, the report is a reminder that we need to pay more attention to how we prepare our vegetables. "We all want to have a healthful diet," she says. So mind the sugar and sodium, and branch out from pizza and french fries.