Accessibility links
On The Trail Of Durian, Southeast Asia's 'Crème Brûlée On A Tree' : The Salt A young couple got hooked on durians after one life-changing bite in 2009. And after two years of tracking the stinky sweet fruit through Southeast Asia, they've become experts on durian tourism. 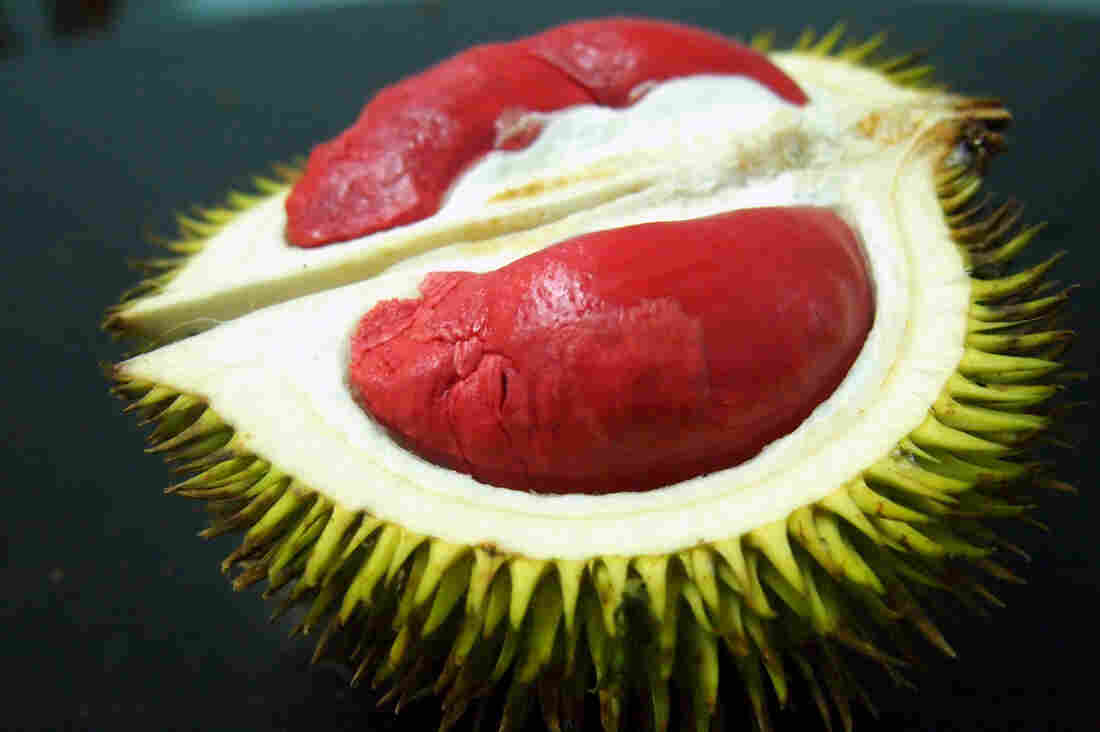 The inside of the Graveolens, a variety of durian that grows in the southernmost parts of Thailand, is sticky and cheese-like. Courtesy of Lindsay Gasik hide caption 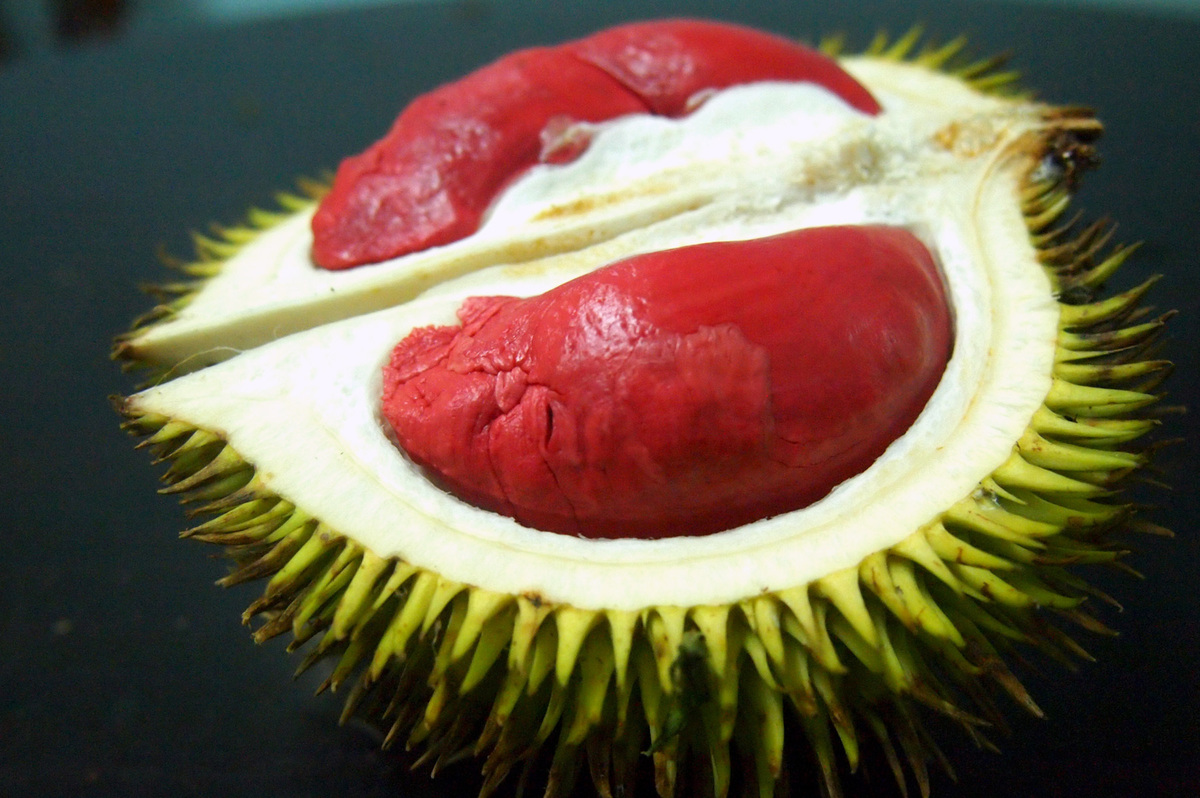 The inside of the Graveolens, a variety of durian that grows in the southernmost parts of Thailand, is sticky and cheese-like.

What if a single taste of one fruit — in this case, the durian — changed the course of your entire life?

That's what happened to Lindsay Gasik and Rob Culclasure, a young couple who visited an Asian grocery store in Eugene, Ore., in 2009 in search of the football-sized fruit with thick, spiky skin. They were curious to try it after hearing that the durian's pungent smell and custard-like flesh had the power to drive people delirious with craving. 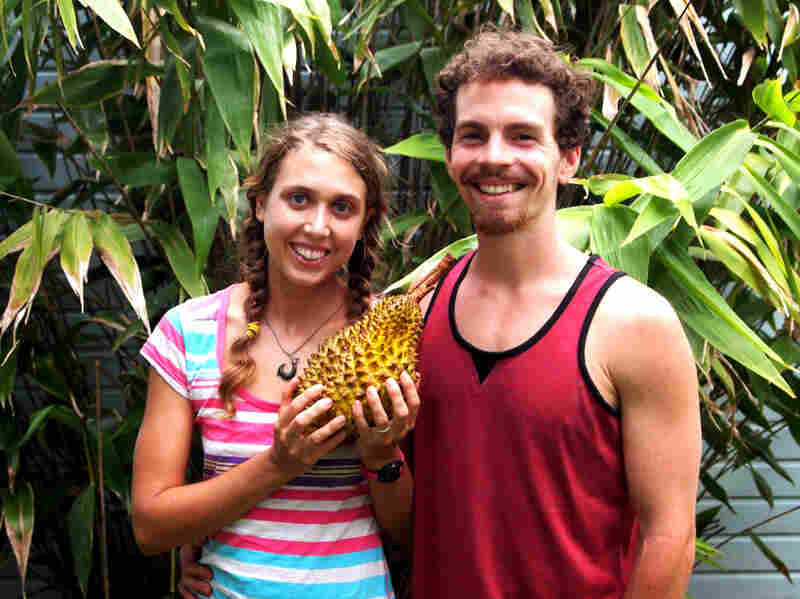 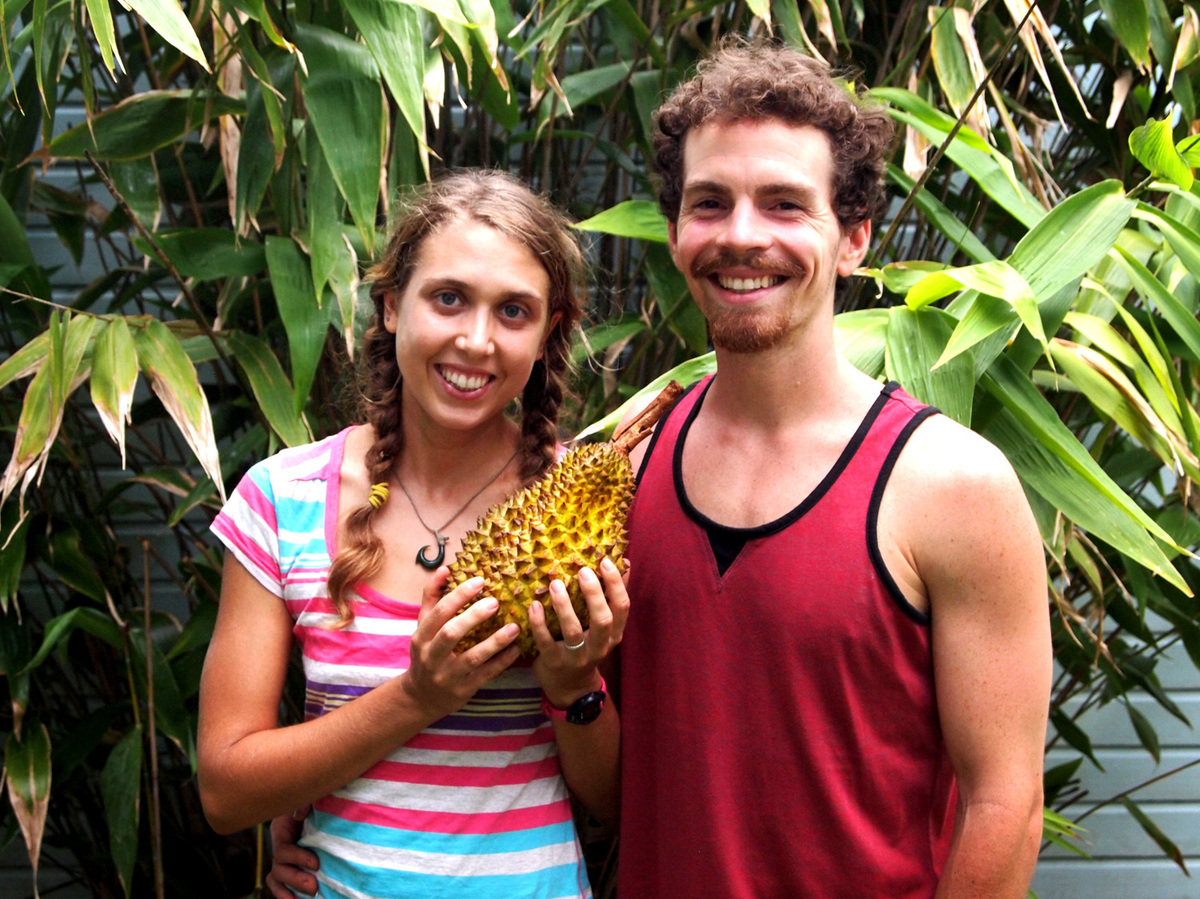 Lindsay Gasik and Rob Culclasure moved to Asia in 2012 to pursue durians. 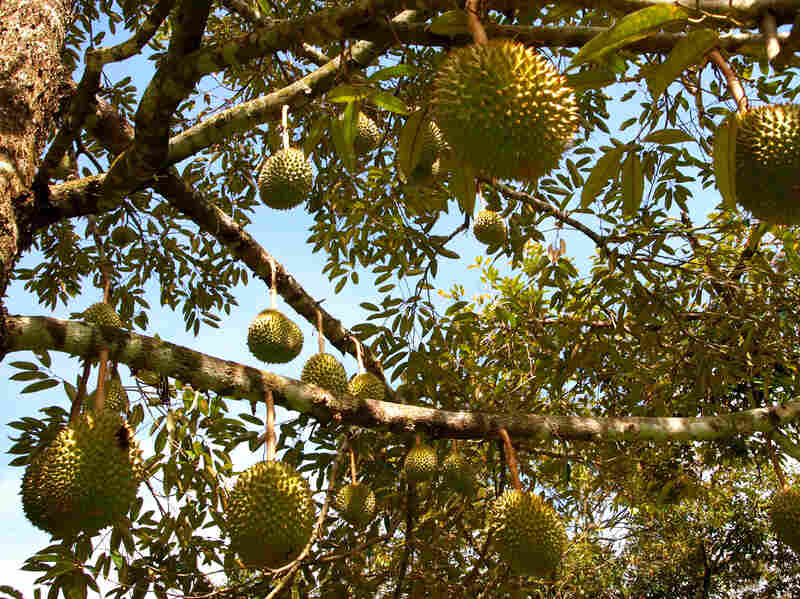 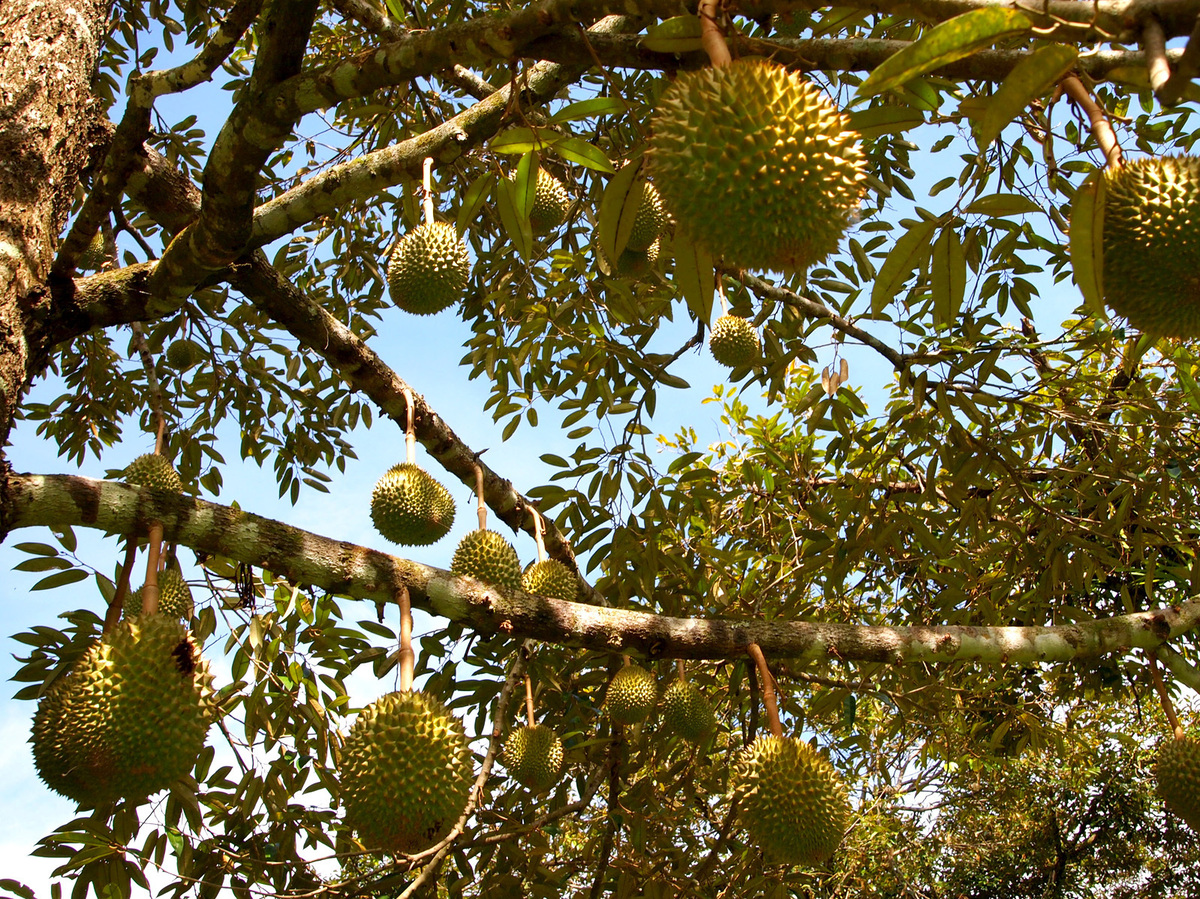 Durian fruit hangs from a tree.

The moment Gasik and Culclasure inhaled the fruit's gassy aroma of fermented pineapple and onion and tasted its cool, creamy, vanilla-flavored flesh, they were hopelessly hooked. Now, after years of traveling through Southeast Asia tracking down and eating durian almost daily, they have become experts on the fruit. And for other travelers who catch durian fever, Gasik has written a durian travel guide to Thailand, which comes out in June.

Five years into their obsession, Gasik tells The Salt they're as enthralled with the durian as ever.

"It's very sensual — the thorny texture, intense aroma, bizarre appearance and amazing range of flavors found in no other fruit or natural food," Gasik tells us by email from Bangkok. "Durian is the only fruit in the world that I know of that combines a very high sugar content with a high fat content. It's like crème brûlée on a tree."

Since the couple departed for Asia in 2012 to pursue durians nearly full-time, they've eaten the fruit in 13 countries, including Malaysia, Vietnam, Myanmar and Australia. Along the way, they visited remote orchards and wild jungles and enjoyed all-you-can-eat durian feasts at roadside stands. And they documented it all on their blog, Year of the Durian.

Thailand, they say, is ground zero for durian diversity and abundance. More than 200 varieties are grown here, and the country's orchards produce more durians by far than any other nation.

Purists Sniff As Stink-Free Durian Fruit Seeks A Fan Base

Thing is, most visitors to Thailand never experience the country's traditional durian culture of roadside stands and small farms open to the public.

"So few travelers venture away from the tourist-friendly beaches and neon cities that great swaths of the country are left virtually untouched by the tourism industry and its vices," Gasik writes in The Durian Tourist's Guide to Thailand. "This is where durian grows."

The guide provides everything you need to know for a durian-centric vacation, like how to harvest the fruit on organic farms, avoid durians that have been doused by pesticides and even arrange lodging in idyllic orchard guesthouses.

In Nakhon Nayok, durian seekers can find an organic orchard where a dedicated farmer has preserved 50 rare varieties of the fruit, while Chantaburi province may be worth a visit for the annual World Durian Festival.

Seasons in the tropics are unpredictable, and fruit trees can be, too. This means you can't find durians just anywhere, anytime. In central and eastern Thailand, Gasik's guidebook tells us, durians are usually available March through June; in the south, durians ripen and drop from the trees almost all year long. 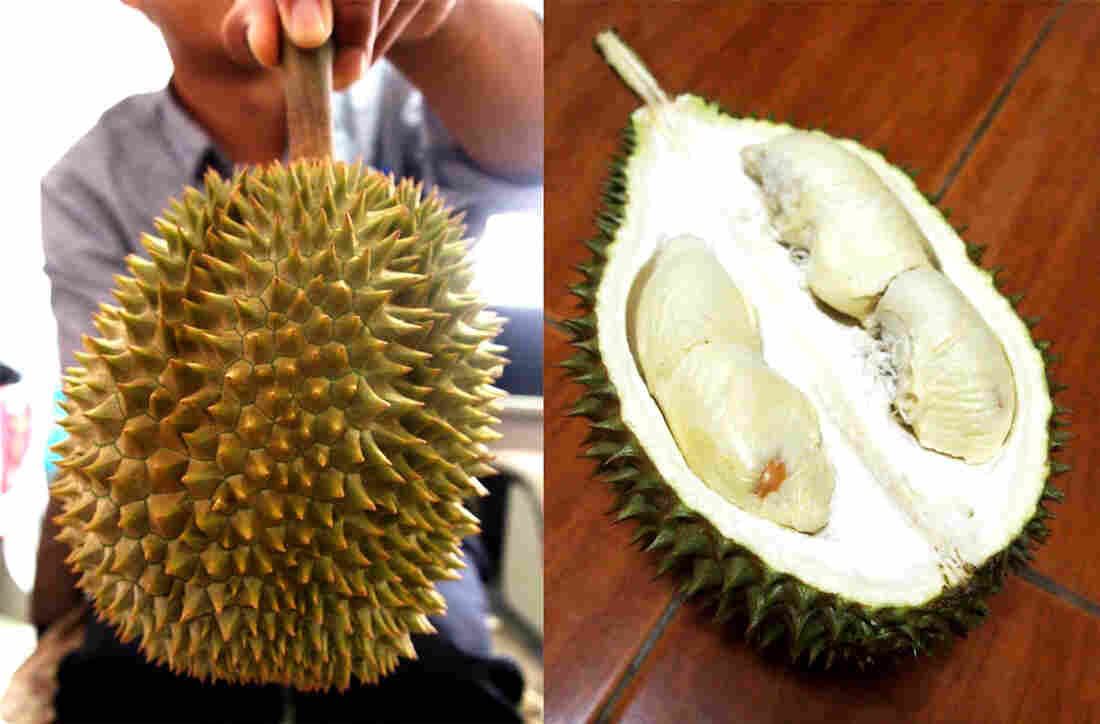 The Longlaplae is a milder tasting durian with almost no aroma. Courtesy of Lindsay Gasik hide caption 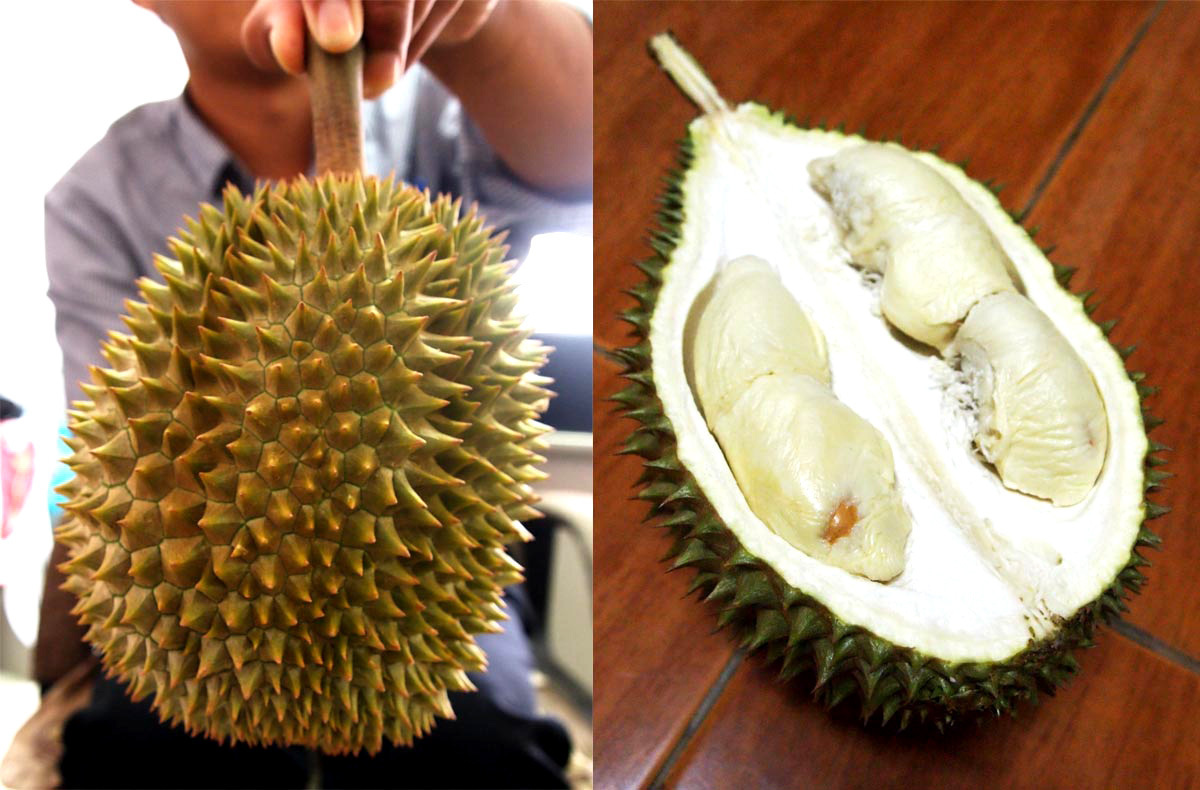 The Longlaplae is a milder tasting durian with almost no aroma.

The guide also provides some vocabulary and phraseology basics. "Chun/Pom thong gan ja gin turian," for instance, means "I want to eat durian." That should help get you moving in the right direction once you've left the Bangkok airport.

You'll want Gasik's tips on the tact and etiquette of eating durians in Thailand, too.

"[Eating durian with bare hands] is considered fairly bad manners," Gasik writes, so many locals use rubber gloves. If you have to go bare, don't shake hands or touch anyone until you've washed your hands. 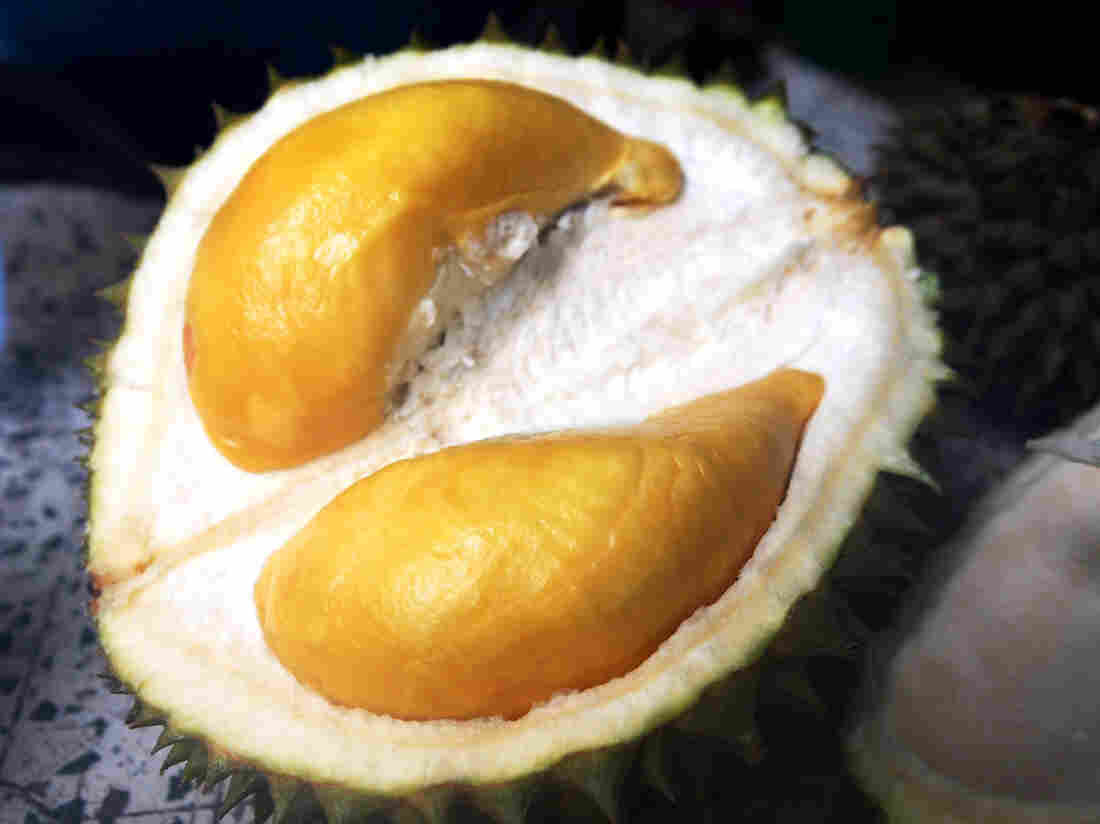 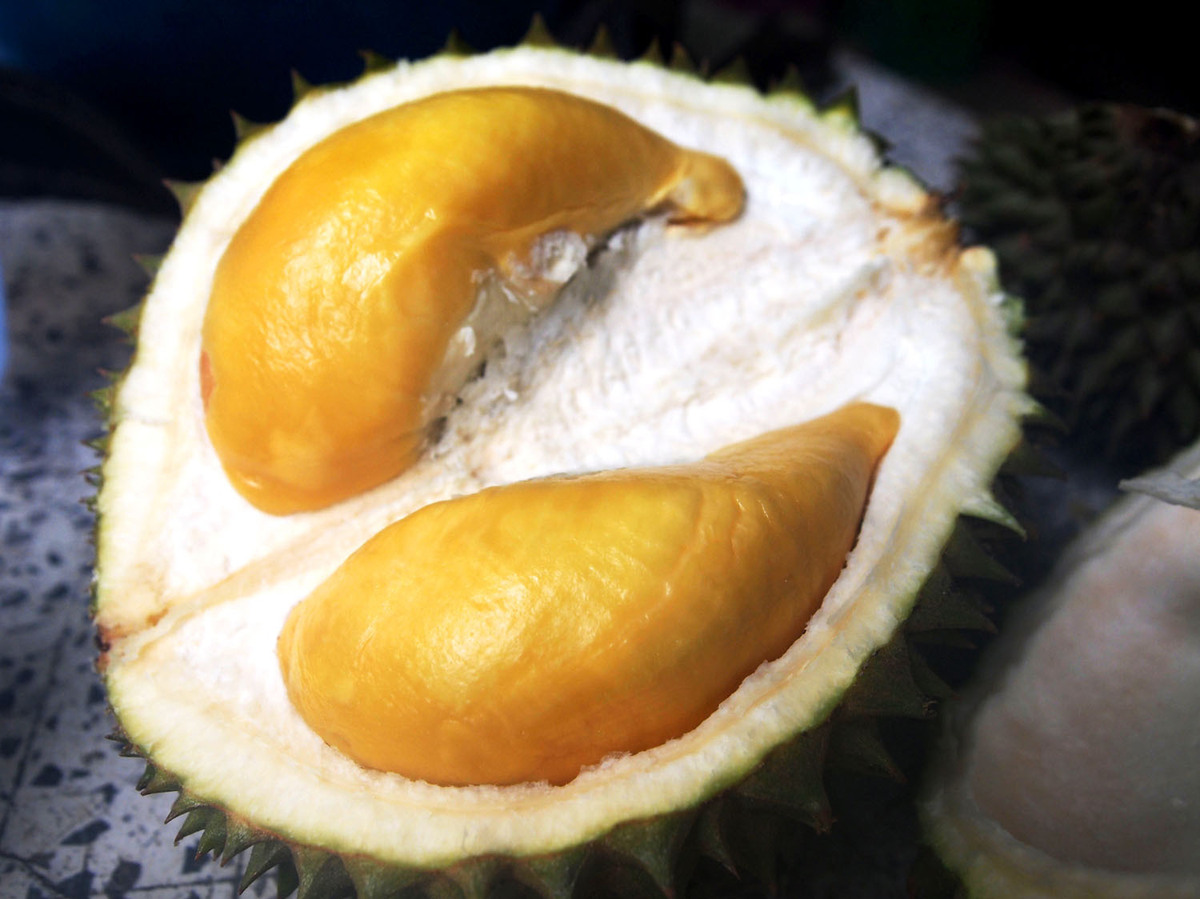 Nor should you take a durian into a closed public space; many people – even people who've been around durian their whole life — simply cannot bear the smell.

For durian beginners, the Monthong, a sweet and creamy variety grown for export to countries like the U.S., is a good starting point. The Longlaplae, too, has a mild, milky flavor and virtually no aroma.

But there's much, much more out there for those willing to venture deeper into the durian flavor spectrum.

"Thai durians come in flavors ranging from vanilla or butterscotch custard to milk chocolate, caramelized onions, or even a sulfurous egg-iness relished by those with a thing for the savory," Gasik writes.

The Puangmanee durian – found in the Chantaburi province – has yellow-orange flesh "with a smooth, chocolatey sensation."

The Ganyao, one of the most prized durians, has "yellow, very dry, thick and smooth [flesh], comparable to an extremely rich frosting or moist cake."

In the southernmost part of the country, there's a rare durian called the Graveolens with what Gasik describes as "lipstick red flesh" so rich, sticky and cheese-like that it can be difficult to swallow.

More intrepid seekers of the fruit can find wild durians in the jungle growing from seed and without varietal names; they're referred to collectively as thurian ban.

And even Gasik and Culclasure have more new durians to taste. This summer, they're hoping for a chance at "elephant dung durian."

Elephants often eat fallen durians off the ground, Gasik explains, and sometimes the entire fruit manages to pass through the animal unbroken. The flesh of these durians supposedly goes through a further ripening process that amplifies the taste.

"There's a guy in Malaysia who says he'll have some in July," Gasik says. "I'm really, really excited."