Accessibility links
Sushi's Secret: Why We Get Hooked On Raw Fish : The Salt We love raw seafood but can't stand uncooked fowl or pork. Why? A big part of it is the effective lack of gravity in water, a scientist says. Weightlessness gives fish muscles a smooth, soft texture. 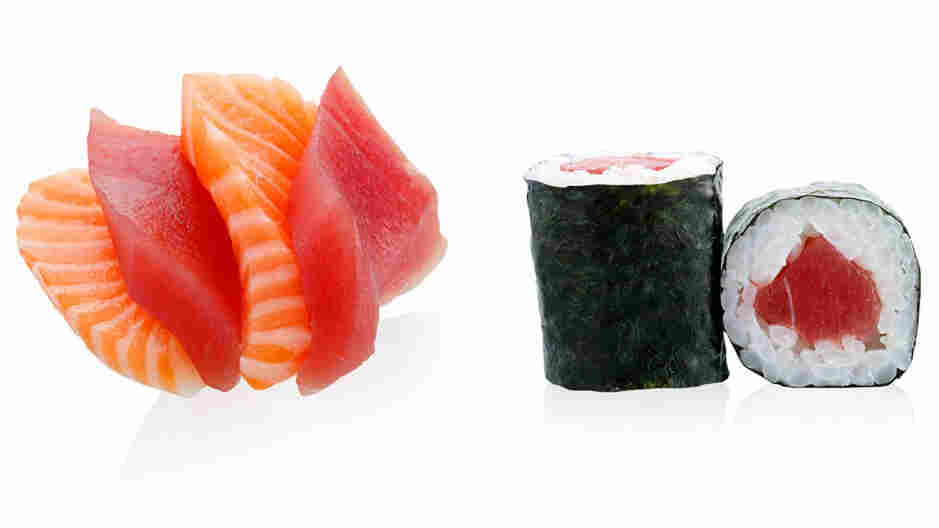 Lazy and luxurious: Raw salmon and tuna have soft, creamy textures because the fishes' muscles don't work as hard as those in land animals. Moonsushi/Flickr hide caption 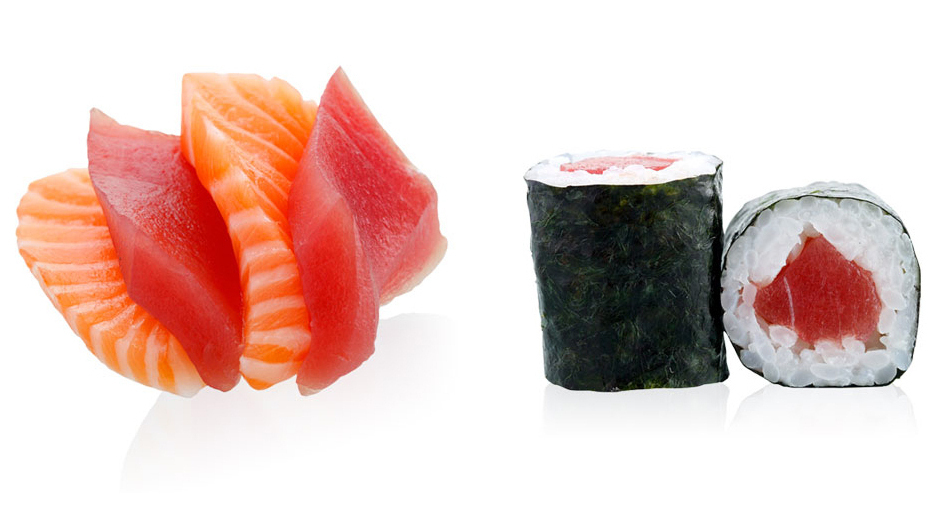 Lazy and luxurious: Raw salmon and tuna have soft, creamy textures because the fishes' muscles don't work as hard as those in land animals.

Los Angeles has brand new bars devoted to an Italian style of raw fish, called crudo. President Obama kicked off his visit to Asia last month noshing nigiri at Jiro's famous sushi bar. And back in December, The New York Times named Sushi Nakawaza as its top restaurant of the year.

But why do so many of us find utter bliss in eating raw sea creatures but aren't so inclined to chow down on uncooked birds, cows or pigs?

A big part of it is gravity — or the effective lack of it in the ocean, says biophysicist Ole Mouritsen, author of Sushi: Food for the Eye, the Body and the Soul. 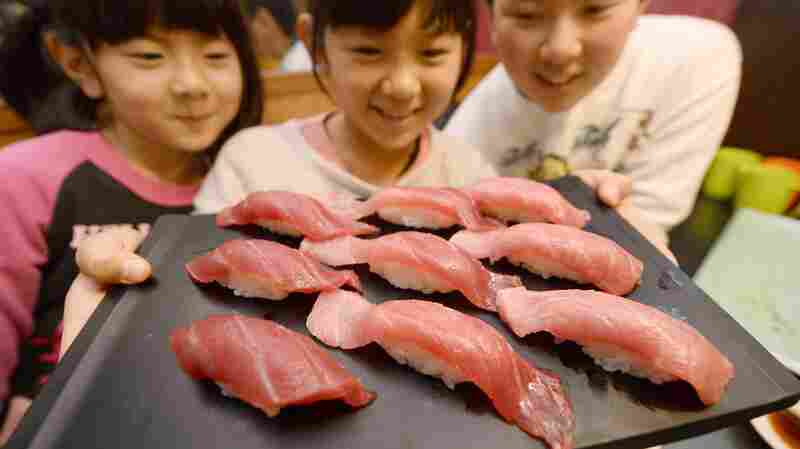 A feast for the eyes and the mouth. Tuna swim long distances, but their muscles are still soft and tender. Kyodo /Landov hide caption 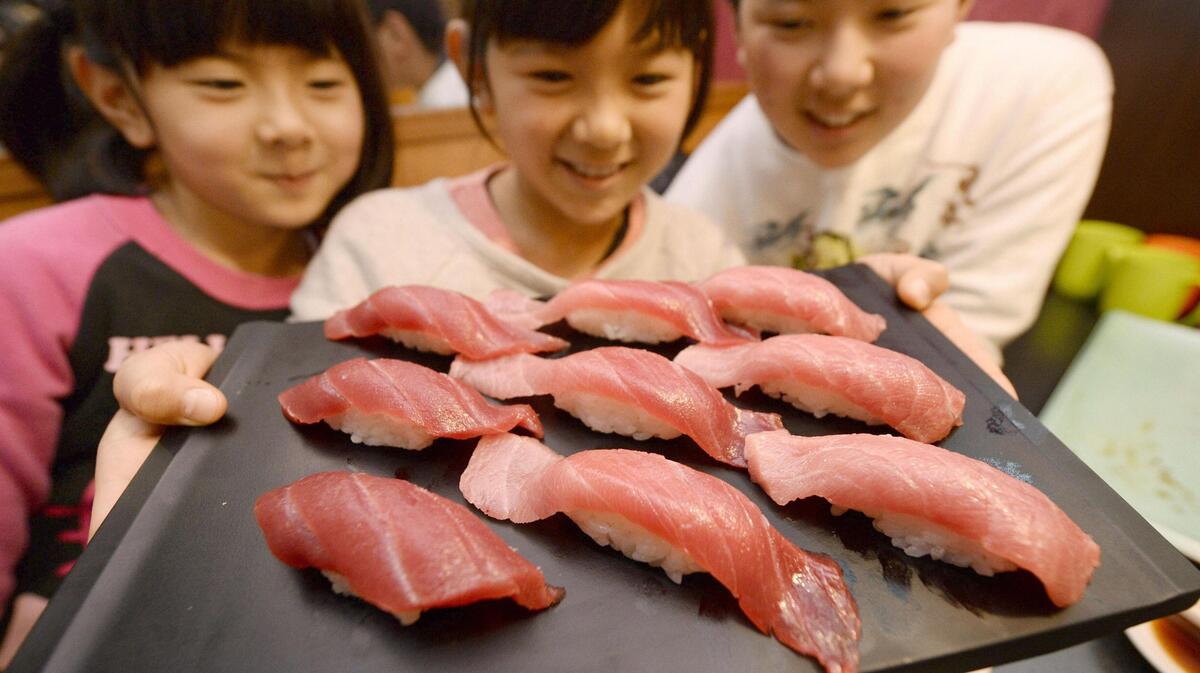 A feast for the eyes and the mouth. Tuna swim long distances, but their muscles are still soft and tender.

"Fish are so soft. You can stick your finger through their muscles," he says. "Try doing that with a chicken or cow. Fish muscle is very different than that in land animals."

Why? Because fish can afford to be lazier than terrestrial animals. Fish essentially float all the time. So their muscles don't work constantly to fight gravity. (The buoyancy force in water counteracts the gravitational force, which makes fish virtually weightless.)

"Fish don't have to support their body weight," Mouritsen says, "so their muscle fibers are shorter and less tough than those in land animals." The same goes for the connective tissue holding the muscle fibers together: It's delicate and weak.

By contrast, "Land animals — like ourselves — are always working to keep themselves upright and keep their shape," Mouritsen says, so our muscle fibers are thicker, tougher and firmer.

The result is a ropy, chewy — and less appetizing — texture when the meat is raw. Cooking softens the connective tissue in meat and improves its texture (it also makes it juicy and flavorful).

In general, the more a muscle works, the tougher, more sinuous it gets, Mouritsen writes in his book. This idea explains why the belly of the tuna, known as otoro, is exceptionally soft: The belly of the fish is the laziest muscle of them all. 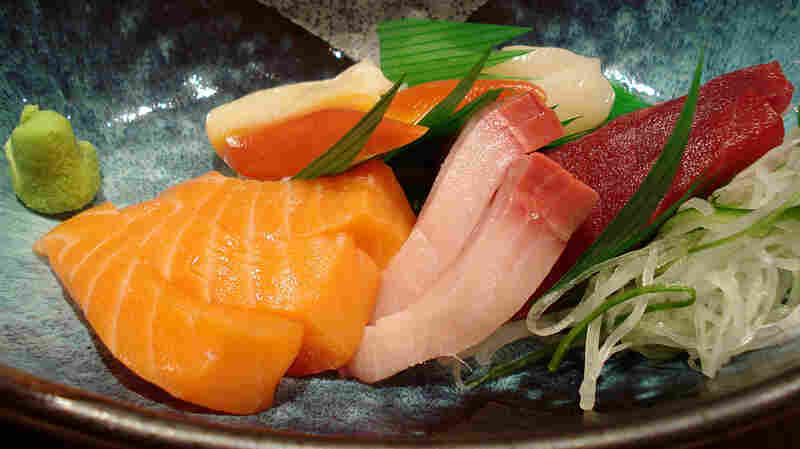 One fish, two fish, white fish, red fish: Muscles that depend on oxygen tend to be red, while those that don't are white. Salmon flesh is orange because of the food the fish eat. Kake/Flickr.com hide caption 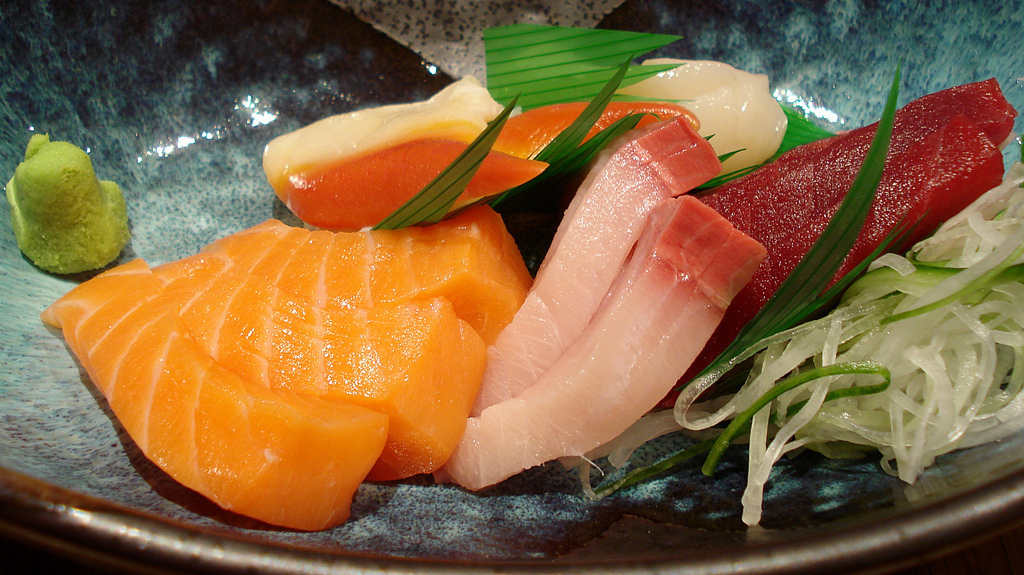 One fish, two fish, white fish, red fish: Muscles that depend on oxygen tend to be red, while those that don't are white. Salmon flesh is orange because of the food the fish eat.

"In contrast, those muscles that are more active in a tuna, say the ones in its fins and tails, are a bit more chewier than other muscles," he says.

Under a microscope, fish, chicken and other meat muscles look similar, with long, parallel fibers, like ropes, stretched out and tied together.

But when you zoom in a little closer, the fish muscles look like the Kate Moss of the bunch: Their fibers are slimmer, shorter and more delicate than the others.

The muscle properties of fish also explain the rainbow of colors you see at a sushi bar.

"Fish that are constantly on the move — say, a tuna — have muscles that are always working and burning carbohydrates aerobically," Mouritsen says.

The muscles need oxygen to make energy. And the molecule that carries oxygen to muscle contains iron. Guess what color iron is in the fish? Red.

In contrast, fish that mostly hang out in one place or on the bottom of the ocean — say, for instance, flounder — have muscles that don't rely on oxygen to create energy. No oxygen means no iron to carry it, which means the muscles tend to be white. (Of course, most fish have a mixture of these two type of muscles and thus can look red, white or pink.)

So what about the pinkish-orange color of salmon? That's a special case, Mouritsen says.

"The coloring is due to what salmon eat: shellfish that are enriched with a pigment that's related to carotene in carrots, called astaxanthin."

This pigment creates the characteristic bluish-gray or green color of raw shrimp and crabs. The molecule turns bright pink or orange when the salmon eats the shellfish or we cook it.