Accessibility links
Paleo For Dogs? Vets Say Trendy Diet Could Make Humans Sick : The Salt Some dog owners favor a raw food diet because they believe it's how their pets' ancestors ate in the wild. But vets worry that people could be exposed to pathogens if pets are eating raw meat. 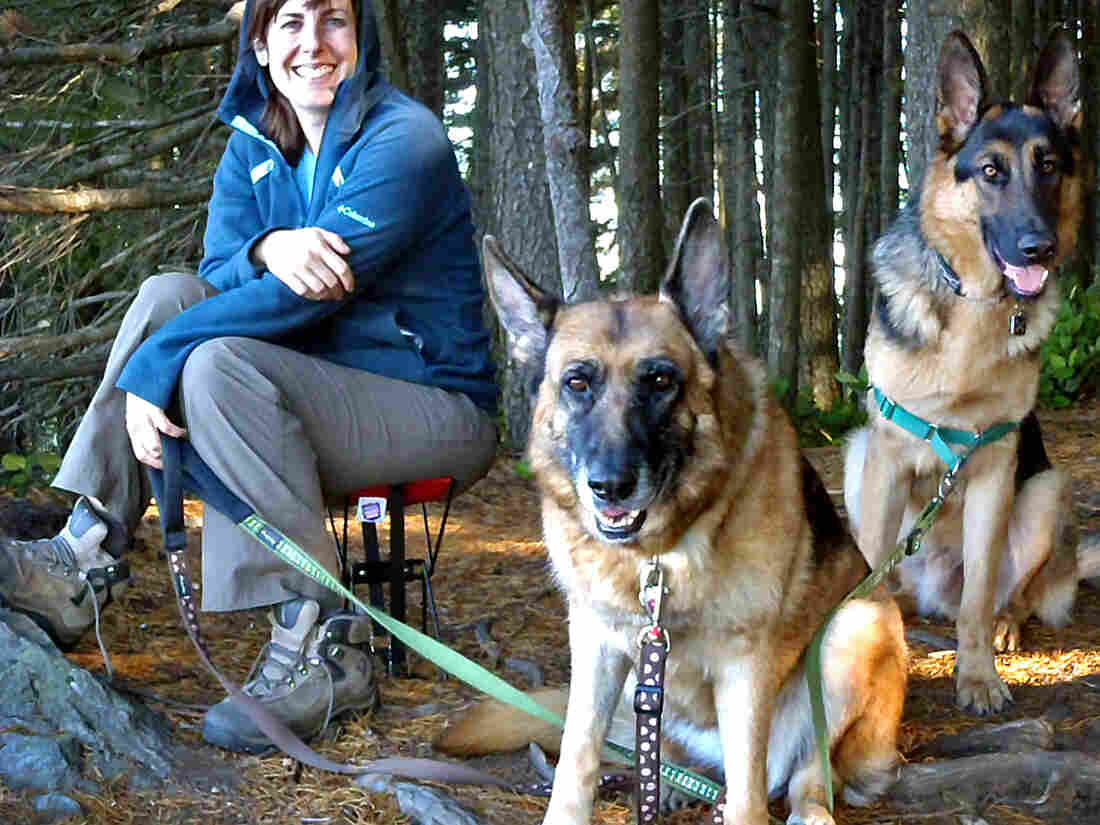 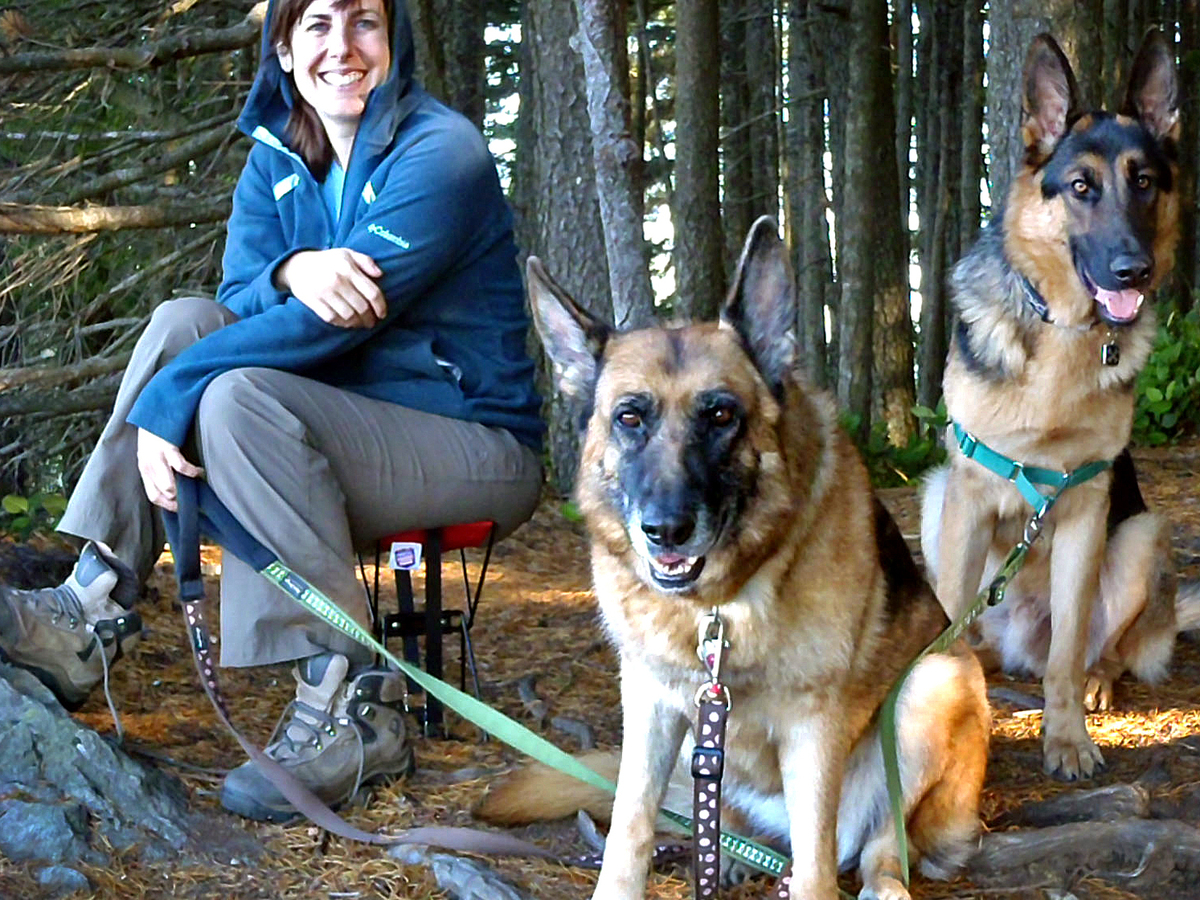 Kari Neumeyer feeds her dogs, Leo and Mia, a raw food diet supplemented by kibble, which she says is more natural than commercial dog food.

Yesterday we told you about the people who are skipping the pet food aisle to whip up batches of homemade goodness for Fido in their own kitchens.

There's another group of pet parents out there going one step further, insisting that their pets' meat be raw. Think of it as the paleo diet for dogs, based on the idea that dogs should eat like their ancestors.

Many belong to a small but passionate community of raw dog food co-ops and discussion groups, in practically every state.

Kari Neumeyer of Washington state, the author of a forthcoming book on dog behavior, began feeding her German shepherd a raw diet five years ago after her vet suggested it might help with allergies. Now, she says, she does it because, "I want to feed the dogs the way that nature would feed them."

She started slowly, getting chopped-up raw chickens, and then whole chickens and even ostrich, including the organs. She added deer bones as her butchering skills improved.

Now she has two shepherds, Leo and Mia, who eat mostly raw plus a little grain-free kibble and dried lamb lung as a treat. And she says her dogs have never been healthier — their coats are shiny, they don't get fleas, and their teeth and breath are better.

Neumeyer admits it's a lot of work: She's lugging home 100-pound bags of frozen raw beef almost every week so her dogs can each get their 2 to 3 pounds of food a day. "I don't have human children. These are my babies," she says.

But many veterinarians are skeptical of this nontraditional doggy diet.

"There are two issues with raw pet food diets," says Joni Scheftel, state public health veterinarian at the Minnesota Department of Health in St. Paul. "Many are not nutritionally balanced for pets ... and there's also the public health issue."

Raw foods can contain salmonella and other pathogens. (That's why the U.S. Department of Agriculture says to cook ground beef to 160 degrees and poultry to 165 degrees.)

Even if the dogs fed a raw diet don't get sick themselves, Scheftel says, salmonella in their waste is a "threat to children and babies crawling around on floors" and people with compromised immune systems. Commercial pet food can be contaminated with salmonella, too, but it is subject to standards and recalls, which gives the public a higher degree of confidence, she notes.

In 2012, the American Veterinary Medical Association adopted a policy discouraging raw food diets for pets. Pet Partners, the nonprofit group that connects people with service animals like guide dogs for the blind, is also against raw diets because these animals are likely to come into contact with people with weaker immune systems.

Still, advocates say raw food is closer to the way animals would eat in the wild. "Dogs are carnivores; they're not meant to eat grains" that are found in most commercial pet food products, she says.

But raw food diets are not necessarily more natural, Scheftel says. "Domestic dogs have evolved to eat more carbs," she says, because they have evolved along with humans.

Evolutionary geneticist Erik Axelsson of Uppsala University in Sweden and his colleagues recently compared dog and wolf DNA to learn which genes were important to domestication. They found that domestic dogs have at least twice as many copies of a specific gene that allows them to break down starch; the research was published in the journal Science last year. According to Science, "Early dogs that evolved more efficient starch digestion had an advantage."

People who feed raw food diets say they are the ones with the advantage — healthier animals. "I don't brush, I just give [them] raw bones. It keeps the teeth clean, like an apple," Neumeyer says.

Still, feeding raw and feeding dogs people food are unlikely to make much of a dent in the commercial dog food market anytime soon. Sales of dry dog food have been increasing for the past 13 years, from a $5 billion market in 2000 to a $9 billion market in 2013, according to the Pet Food Institute.