Accessibility links
Oklahoma's Extreme Drought Has Wheat Farmers Bracing For Worst : The Salt Four years of crippling drought has withered the agricultural economies of Great Plains states like Oklahoma. The USDA forecasts this year's wheat crop will be half what it would be in a good year. 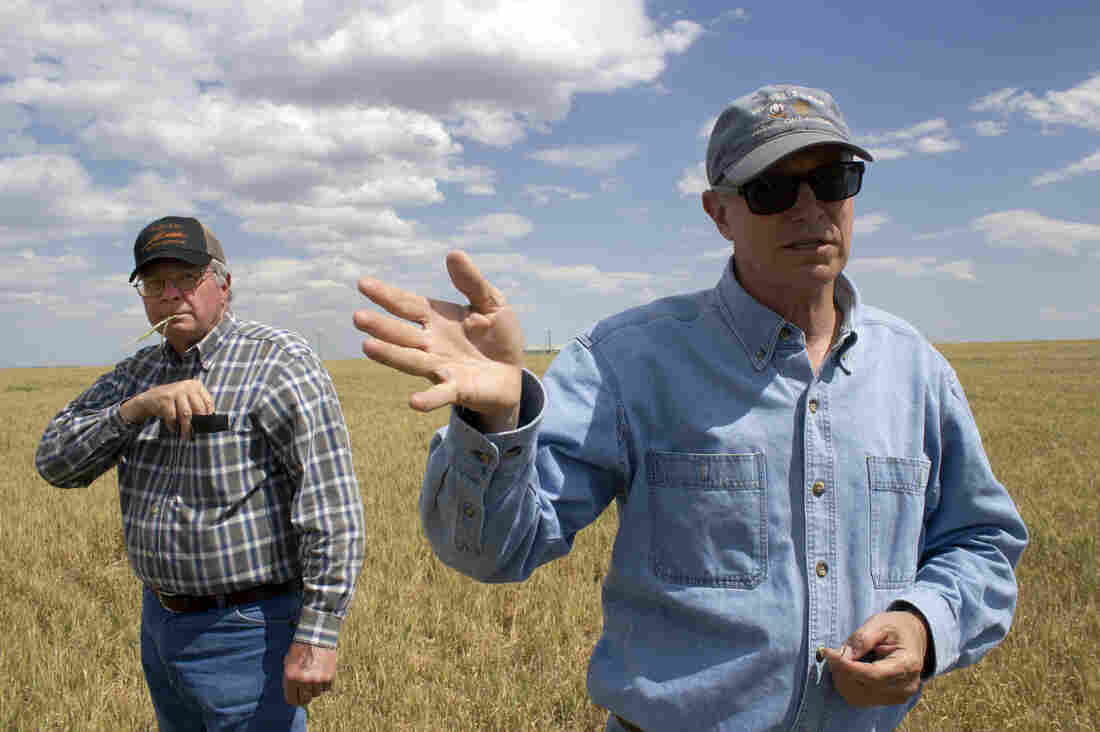 Brothers Fred and Wayne Schmedt run a wheat farm in southwest Oklahoma. They say their wheat stalks are about a third as tall as usual. Joe Wertz/StateImpact Oklahoma hide caption

Rainfall totals in southwest Oklahoma are more than 3 inches below normal. And that means that the wheat crop grown in brothers Fred and Wayne Schmedt's farm is several inches shorter than normal as well.

Laughter is key to surviving as a farmer here. Fred Schmedt looks out on his field, then down at his legs and laughs at how short the wheat stalks are.

Four years of extreme drought has withered the agricultural economies of southern Great Plains states like Oklahoma, where farmers are bracing for one of the worst wheat crops in state history. 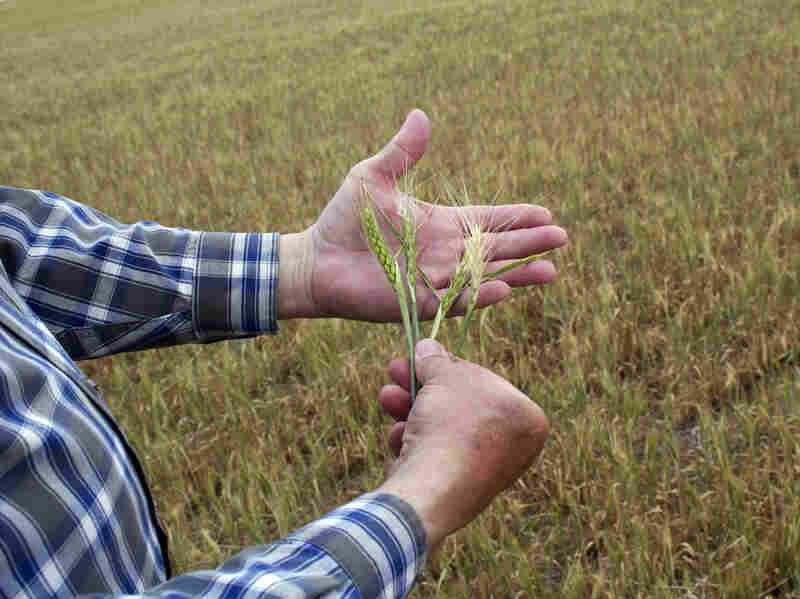 Fred and Wayne Schmedt say the drought has withered their wheat plants down from an average height of 24 to 30 inches to just 6 to 8 inches. Joe Wertz/StateImpact Oaklahoma hide caption 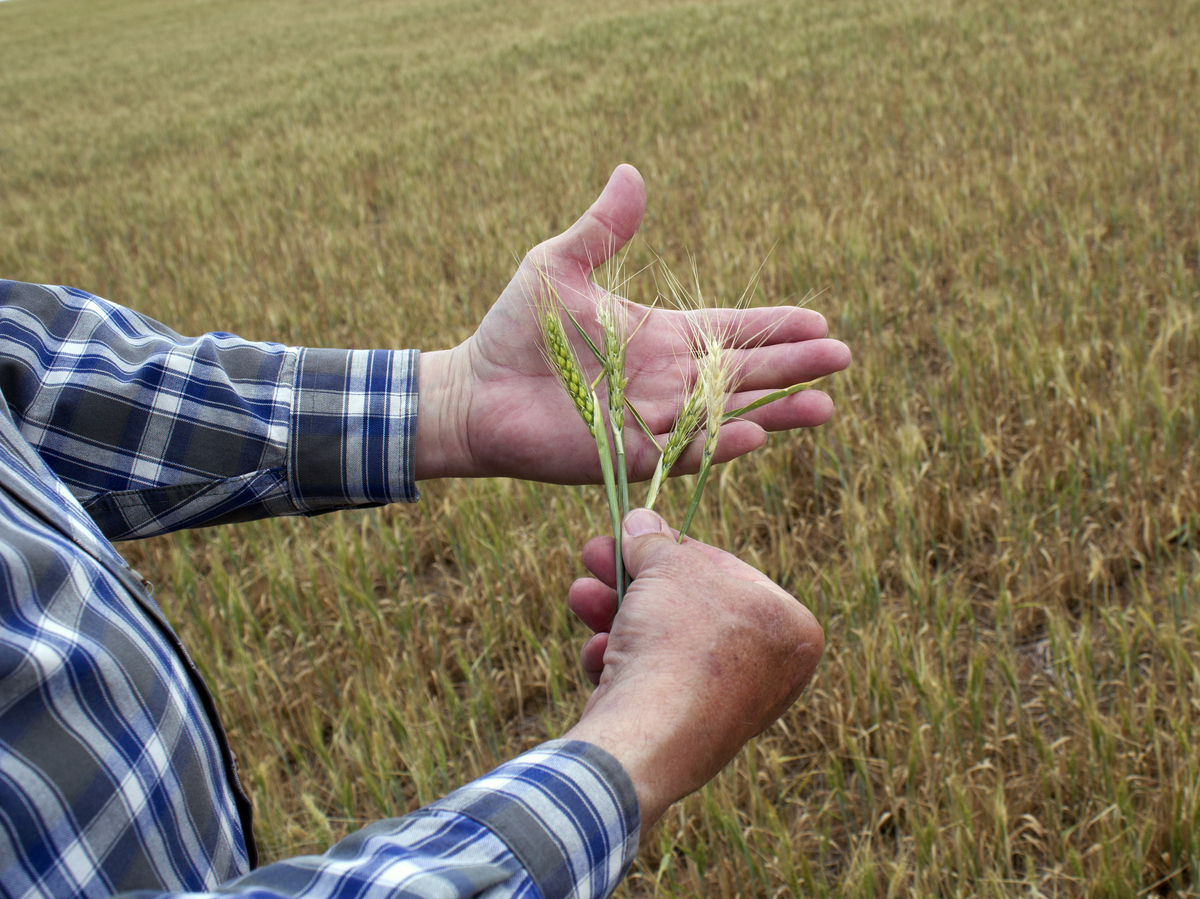 Fred and Wayne Schmedt say the drought has withered their wheat plants down from an average height of 24 to 30 inches to just 6 to 8 inches.

Wheat is Oklahoma's No. 1 crop. In a good year, Oklahoma produces 120 million to 140 million bushels of wheat. The U.S. Department of Agriculture forecasts this year's crop will be half as big.

"In rural Oklahoma, they make most of their money off the wheat that they bring in," Edwards says. "If they're not bringing in wheat, they're not making money. It's hard for them to keep people employed."

Fred Schmedt says he isn't sure if he'll still have work for the "wheatie," a seasonal worker, also known as a "custom cutter," who comes every year to help during the harvest.

"The guy that does our combining comes from South Dakota. He's cut our family's wheat since 1973. He sort of needs a job," he says.

A few miles away from the Schmedts' farm, at a grain storage company, you would normally hear trucks coming and going, fertilizer rigs and the whooshing sound of the elevator's giant screw turning as it moves the grain around. But you don't hear any of that.

"Just quiet as a mouse around here," says Mike Cassidy, who runs the storage company. "There's not a sound anywhere except the air conditioner running."

Cassidy's grandfather built the grain elevator here in 1921. The company employs about 10 people year-round and hires another 10 workers during the harvest. Cassidy says he's not hiring those seasonal workers this year.

While a few farmers will go out of business, others have crop insurance. Cassidy doesn't have that financial lifeline, and while he doesn't think he's going to go under, he's cutting costs, saving money and trying to diversify his business by selling more products, like lumber.

One bad sign of the drought's toll is the big, golden hay bales that dot the fields. There shouldn't be so many so early, according to Edwards from Oklahoma State. It's a sign that many farmers have given up on harvesting wheat — they're in salvage mode, just using the stalks to make hay for cattle.

And the state might not even have enough hay, Edwards says. "It's a big deal for the cattle industry as a whole. The southern Great Plains is the buffer between the cow-calf producer and the feed yard."

Ranchers send calves to Oklahoma to fatten up in pastures during the winter. If there's not enough hay, ranchers will have to make other plans. The uncertainty could further push up prices, which are already the highest they've been since the 1980s.